Aretha Franklin once sang ‘You better think (think), Think about the word game you’re trying to play with me, Think (think, think)’. She was of course referring to Think Words!, a fast-paced family word game from John Adams aka Ideal.

Okay, okay, I admit it, I’ve misquoted Aretha so let’s move swiftly on because I’m going to teach you about this game, like the son of a preacher man…

This is a 2 to 8 player game according to the box. It plays well at all counts but somewhere between 4 and 6 is probably best. I have even heard my eldest son play it on his own to try and get all the letters pushed down.

The age limit of 8+ years is dependent on your child, if they are good at knowing what words start with what letter and are confident around that then there is no reason why a slightly younger child couldn’t play. I have played this with my 4 year old but he needs considerable help – I still think this helps his vocabulary and spelling through osmosis but ultimately he just wants to hit the button in the middle which resets the timer, so we usually team up.

The game is ever so simple and easy to learn. There is a deck of cards with subjects on and a letter wheel. Each player has to say a word that begins with an unselected letter on the wheel before the 10 second timer runs out. The letter wheel has 20 buttons to push down (it omits Q, U, V, X, Y and Z).

So for example, if the subject or category was “Things in the Bathroom” you could say “Toilet” and push down the T followed by a slap of the central button to reset the timer. Play moves on to the next player who might say “Sink” pressing the ‘S’ and play moves round until all the letters are depressed. A player is eliminated from the round if they run out of time, give a spurious answer, or don’t say an answer before the ting of the timer. Last player standing (even if all letters haven’t been pressed) gets the category card and a new one is drawn. It is a quick game and you sort of play for as long as you want. The winner is either the player with the most category cards after a set number of rounds, or the first to win a set number of category cards, e.g first to five. 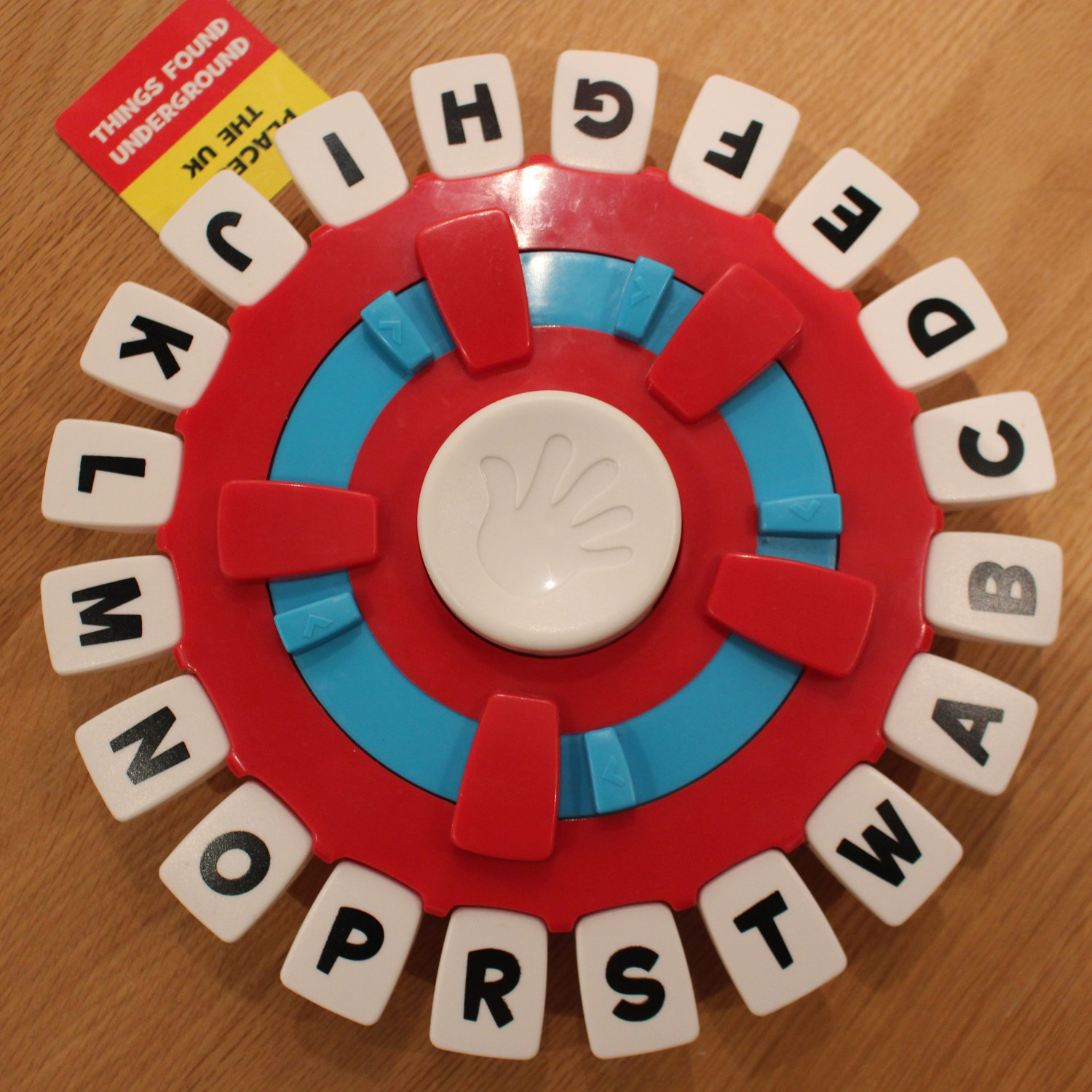 If you are playing this game with children it is Frantic, that’s right with a capital F. If you are playing this game without children something has gone horribly wrong, this is a family game after all. A swathe of mmms and errrms will fill the air as the timer ticks down. Clearly making these noises clears your brain of any other thoughts and allows you to focus on the letter in hand. It doesn’t work for me but it seems to be the default action of anyone under the age of fifteen.

Words will be blurted out loudly and quickly followed by a way too hard slap of the timer, thus resetting it for the next player.

The ten second timer does add an urgency to the game, which in turn hinders the thought of words that could lead you to victory. For me, the timer can cause my brain to just reboot like an old computer and even makes me forget words I have already primed whilst others were taking their go. At some stage it is inevitable that someone will put their hands to their head and pull a “Gah!” face like something in the Beano. At this point you see their mind melting behind their wide open, but blank eyes.

The game is inclusive. Yes, I would like to think that grown-ups with their vastly greater internal thesaurus have the edge over the younglings but as it is turn-based you are just as likely to be left with the tricky letters at the end. You can therefore be eliminated by your spawn in a humiliating fashion, or you might just let them win because you think you should. I don’t.

I do however make sure I am choosing appropriate categories that the kids can at least participate with. The category cards have a couple of options and so our house rule is to choose the best one the card.

This game is completely centred around the letter dial. It is an okay bit of kit and is unlike most other gimmicks in a family game. It is good and has survived my children’s’ overzealous slapping of the timer to date. The timer ticks and a ting sounds after 10 seconds. This could get annoying, but, as mentioned, it adds to the pressure when playing.

The cards are a little flimsy and small. As a result my boys have managed to bend quite a few now. I’m still managing to sleep at night and haven’t resorted to buying a new version because of these minor creases but there is a little part of me that does want to. I do like the way the cards store away inside the underneath of the letter wheel. There seems to be enough cards too, something like 144 different categories. I dare say if this was played every day over a wet half-term it might not be quite enough. It is plenty for the occasional game though, and to be fair that is how often you will play it.

I acknowledge there are a lot of word-based games in this genre of varying abilities. My wife loves them so I have played quite a few, ‘Articulate for Kids’, ‘Scrabble Junior’ and ‘5 Second Rule Jr’ could all be rivals to this. For a more grown-up version ‘Tags’ is a genuine contender. Think Words! unique selling point is the letter dial. This could be viewed as a bit gimmicky but it works and the kids love it. A so-called travel version has also been released called ‘Think Words Spin’. I won’t spoil a review of that but the original game is better and you probably don’t need both! Also I must add this is perfectly transportable.

The frenzy Think Words! imbues onto my children is genuinely brilliant to watch. I don’t love playing this game but I do like it and as such it is a good family game. That said, there are a lot of family games out there that my kids can grasp that sees us happily playing on a bit more of a par with one another.

I like the ability to make Think Words! as long or as short as you want. It answers that plea for one last game before bedtime without having grumpy children the next day. You also feel like it is sort of educational too, as it helps build vocabulary and spelling.

It is an excellent game for the kids to play with a few of their friends of the same age. It takes little explaining to children new to gaming and they would all enjoy the fast-paced nature of it. With that in mind it is a good game to play on a sleepover. If you don’t want them playing electronics all night, or if the movie has finished and they are predictably not ready for bed – this would fill time.

The frenzy Think Words! imbues onto my children is genuinely brilliant to watch. I don’t love playing this game but I do like it and as such it is a good family game. That said, there are a lot of family games out there that my kids can grasp that sees us happily playing on a bit more of a par with one another. It is still a good addition to the family board game cupboard though.

If you already own Think Words! and enjoy it, or are looking for other inspiration, you might also like these similar games: 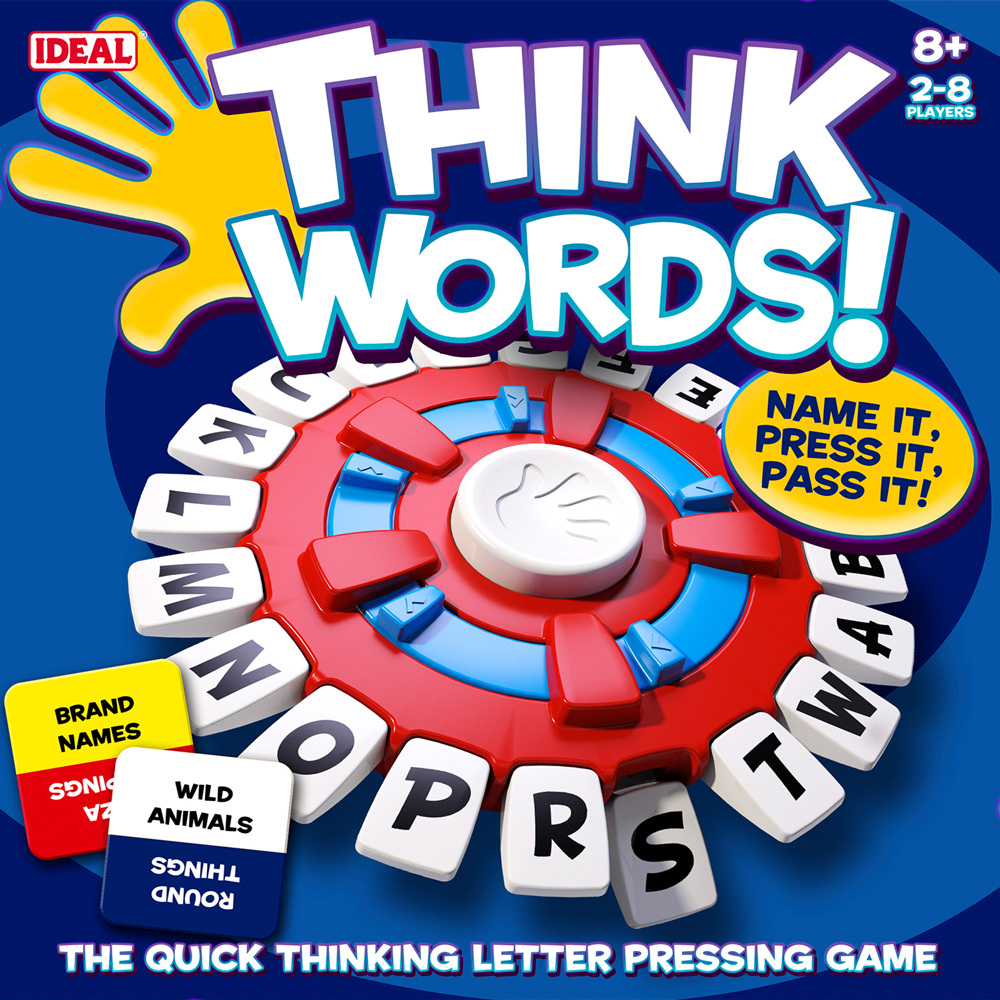