Your partner itches a little uncomfortably… it means only one thing: it is time to point and shout “You’ve got crabs!” On this occasion it is perfectly justifiable and will not cause offence. Even better – they won’t have to visit the clinic the next day.

‘You’ve Got Crabs’ is a game from the creators of Exploding Kittens and shouting the phrase is an integral part of this card-drawing party game. I hasten to add there is no need to roll around in the sand in Magaluf to catch crabs in the normal way. I don’t want to be shellfish so let me tell you a bit more…

The game is for 4, 6, 8 or 10 players, yes that’s right you need an even number of players for this one so that you can split into teams of two. Each team then disappears to their private location to discuss their top secret signals which have to be non-vocal. So for example, you could brush your hand through your hair like a Vidal Sassoon model, wink like Priya Prakash Varrier, or itch your eyebrow like… someone with an itchy eyebrow.

You’ll also want to come up with a code to tell your partner you nearly have a match. Anyway, you’ll need a few different tells between yourselves. When everyone has their secret messages in the bag you sit diagonally across from your team mate and the game can start.

Out of the beautifully satisfying ‘Emergency Crabbing Kit’ box you distribute a couple of crabs to each player. Then the cards are produced, if you have played Exploding Kittens you will quite rightly expect some humorous and good-looking artwork on these. You won’t be disappointed. Four cards go to each player and then four cards go face up in the middle of the table to form ‘the ocean’.

The turn cycle alternates between sides rather than players and so a mad swapping session occurs with a member of each team competing with opponents to swap cards around in the aim to get four of a kind. Once all swapping has ceased and “3,2,1, crabs” has been called, the other members of the team get a go at swapping. Play goes back and forth, replacing the ocean as required, until you have four of a kind. At this point you have to alert your teammate to call out that you have indeed got crabs.

If your teammate accuses you and you have got four of a kind you get a bonus crab token, if they are wrong you lose one. But… and there has to be a but… your opponents can also accuse you of having crabs – perhaps that wink was just too obvious? If they are correct, they get to pinch one of your crab tokens, but if they are wrong you get to steal one of theirs. The winning team is the one with the most crabs at the end. 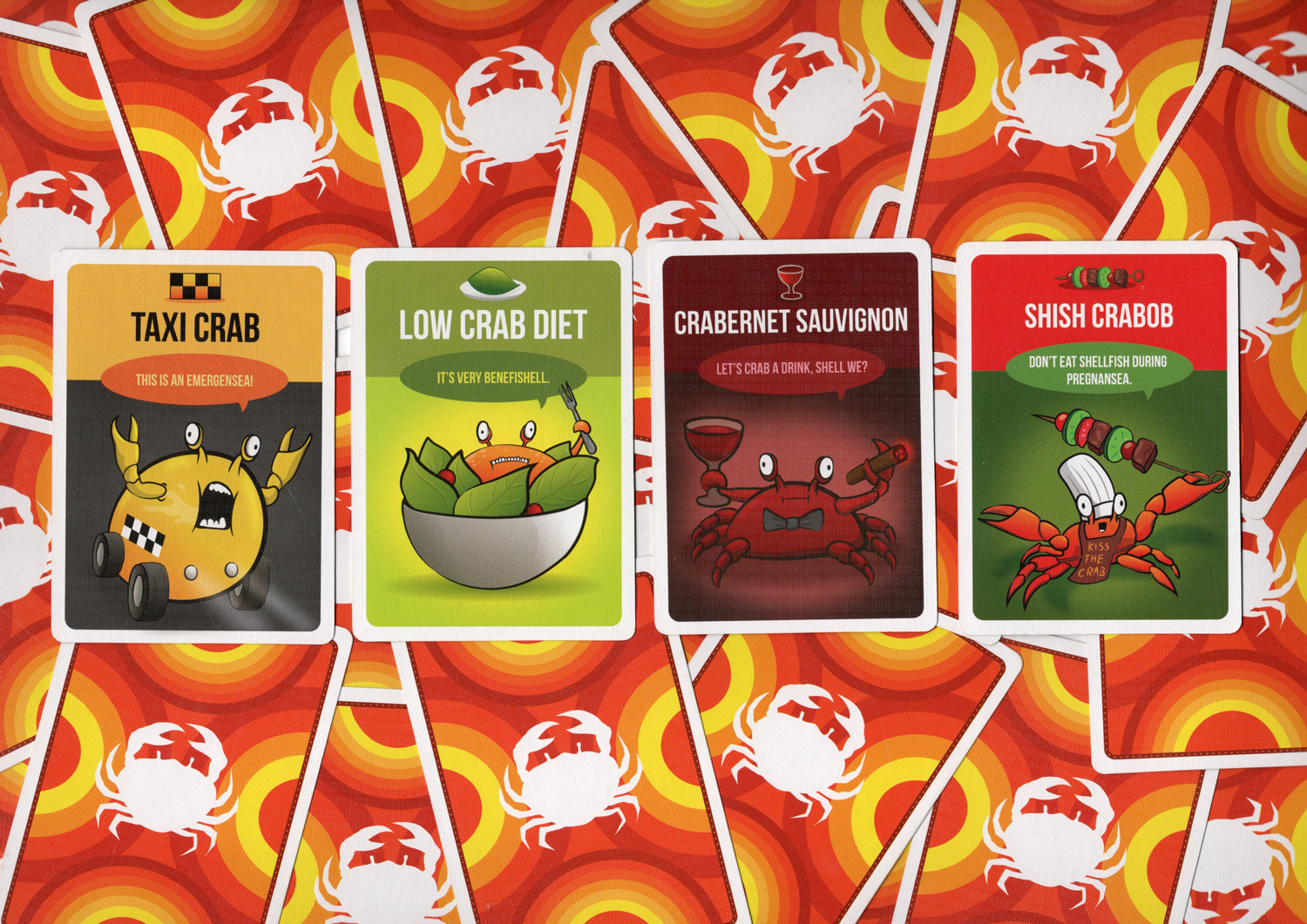 This game is one of those that I tend to get out after having had a couple of drinks. You see for me, it is the sort of game you go to after playing something more serious and you’re not quite ready to call it a night, or you have non-gaming friends around but you still want to play a game. That’s not to say it is lightweight, well actually I guess it is a little but it doesn’t really matter because it is quick to learn, fun and will inevitably end in a bit of laughter.

I should mention the laughter doesn’t come from you shouting “you’ve got crabs”, it comes from you not remembering that an itchy ear signal means you’re nearly there, rather than actually there. Or, that all of a sudden you have an incredibly itchy beard that you can’t actually itch for fear of your partner thinking you have four of a kind. Or perhaps you’ve run out of drink and sipping from an empty glass is a bit too obvious a signal now. It might just be because you suddenly realise your best friend (who is on a different team) has so many ticks that you pass over crab token after crab token for wrong accusation, failing to claw any tokens back. Add into the mix the varying levels of observation skills of players and you have a little bit of healthy frustration too.

This is also family friendly, nothing malicious or too hard to learn, that is if you can gloss over the innuendo of the title. 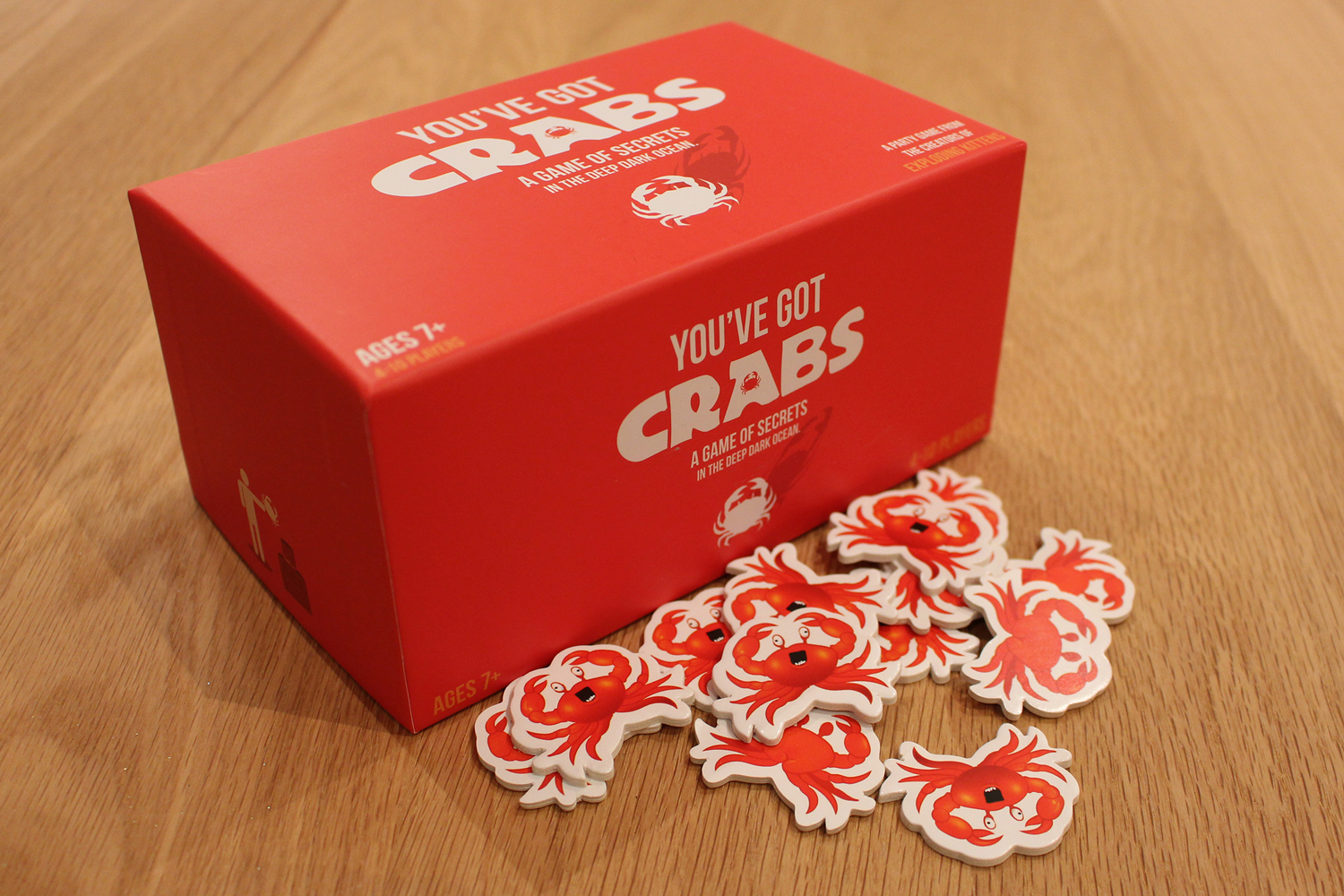 This is a feast for the eyes and the production value is high which goes somewhat towards the RRP, but not quite! The cards as you can see above are humorously illustrated. The crab tokens are gorgeous and a nice touch is they are double sided, with the reverse of the crab on the back.

The box is just brilliant. Lifting of the lid reveals a mini chest of three drawers to beautifully house the cards, crab tokens, crabbing license and the rules. Thematically it works and takes away from the innuendo for younger players.

Final Thoughts on You’ve Got Crabs

Now a concern over party games such as these is longevity… is it just a novelty? Well it is and it isn’t. I guess if you stay in the same teams maybe, but if you mix the teams up you will find yourself making up new secret messages to protect old successful ones and to stop your opponent seeing a tell you have used previously and calling you out. Thinking up weird and whacky secret movements on the hoof at the start of the game that won’t be spotted with a sideways glance is all part of the fun.

A party game for up to ten players that keeps everyone involved and is fast-paced is rare – ‘You’ve got crabs’ delivers exactly that. It is undoubtedly different from the more aggressive Exploding Kittens.  This is light-hearted fun and heavier gamers will be left uninspired. It may not be thought provoking or immersive but it doesn’t pretend to be, it’s a fun game and sometimes that’s exactly what you want to play! The trouble is, that ‘sometimes’ isn’t as often as some other party games. I will be surprised if this game becomes your ‘go to’ party game, despite its fantastic production qualities. Yet when you do get it onto the table you will be amused, that’s for sure..

That’s it really, my only disappointment is that I didn’t get more crustacean puns into the review, you sea it wasn’t easy! All that remains is for me to say tartar for now!

You’ve got crabs is a quirky card game that in the right circumstances is great fun. It also has times of absolute hilarity and on more than one occasion have been crying with laughter while playing it. Although, I hasten to add that has always been after I have imbibed. It does earn what little space it takes up on the shelf or in the cupboard and is a worthy addition to anyone’s collection However, it is difficult not to look past its high RRP and think that there are better games for less money.

If you already own You’ve Got Crabs and enjoy it, or are looking for other inspiration, you might also like these similar games: 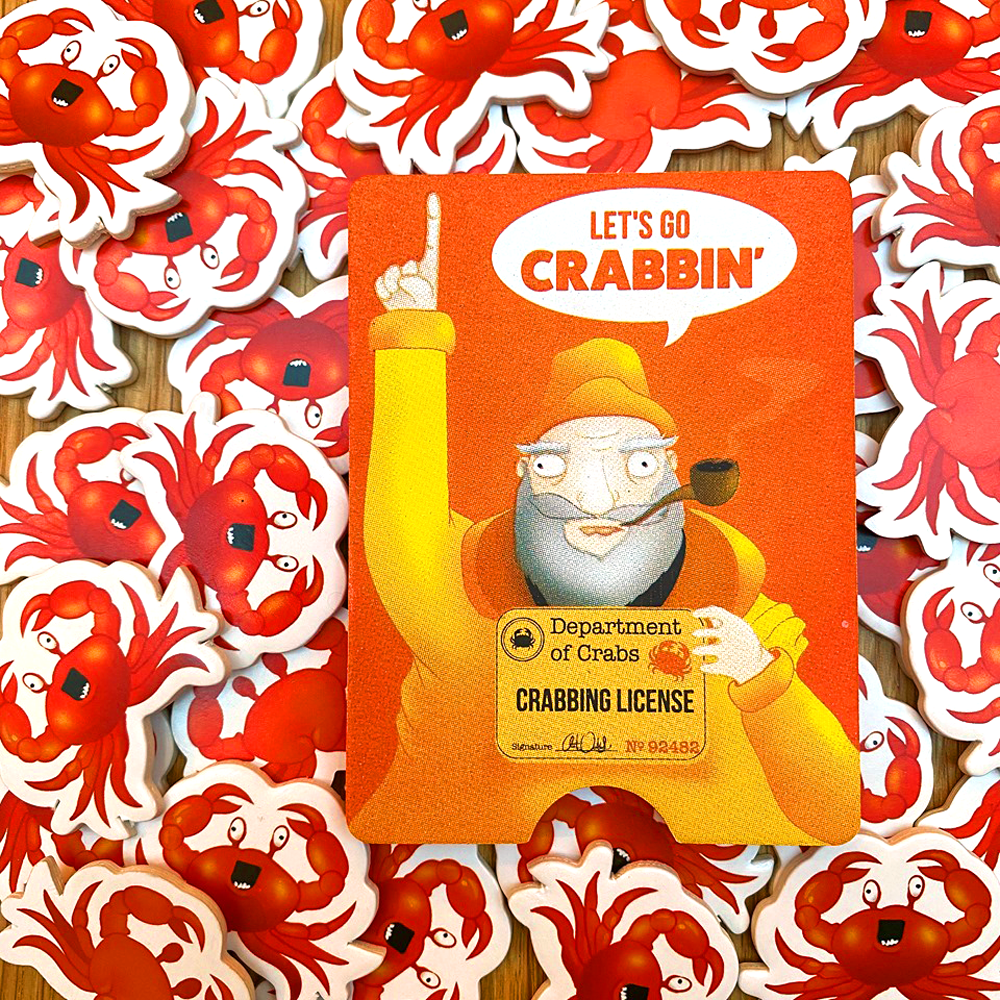 Buy You’ve Got Crabs
from Amazon

For clarity. We don’t get paid for our reviews. We were given this game from a relative, this has not affected our review in any way.