The award winning game Dobble is over a decade old. You might know it by its pseudonym Spot it! or you might have seen it wearing Star Wars or Harry Potter disguises. Published by Asmodee this game’s closest relative is snap.

So how does a simple game of finding pairs win awards and last over a decade with unwavering popularity? Is it hype and marketing or is it a good game? Read on to find out….

Dobble is easy to grasp. Most people will understand the simple objective of matching an image on two cards. This original version contains 55 cards, each with eight illustrations on. When comparing two cards only one image will ever match. Dobble however, mixes it up and messes with your brain! It does this by varying the sizes of the symbols from card to card. When you stop to think about this, it is really, really clever. The illustrations don’t change colour, the creators weren’t that twisted, but they did decide on a palette of colours that frequently get used and help camouflage one another.

Dobble offers a handful of different ways to play… The Towering Inferno, The Well, Hot Potato, Gotta Catch Them All!, and The Poisoned Gift.

However they try to market it with these different mini-games, Dobble is still ultimately the same matching game. You have to match to either gain or get rid of your cards. That doesn’t really matter though, because this is still very clever in its tricky simplicity.

My favourite mini-game is Towering Inferno. Whereby each player has a card in front of them and there is a central draw deck. Turning over the top card of the draw pile players work out which of their symbols match to win that card. The player with the most cards at the end wins. This is the one I play with my kids the most. It doesn’t need to be more complicated than this and you can still have fun without the vindictiveness of some of the other options. 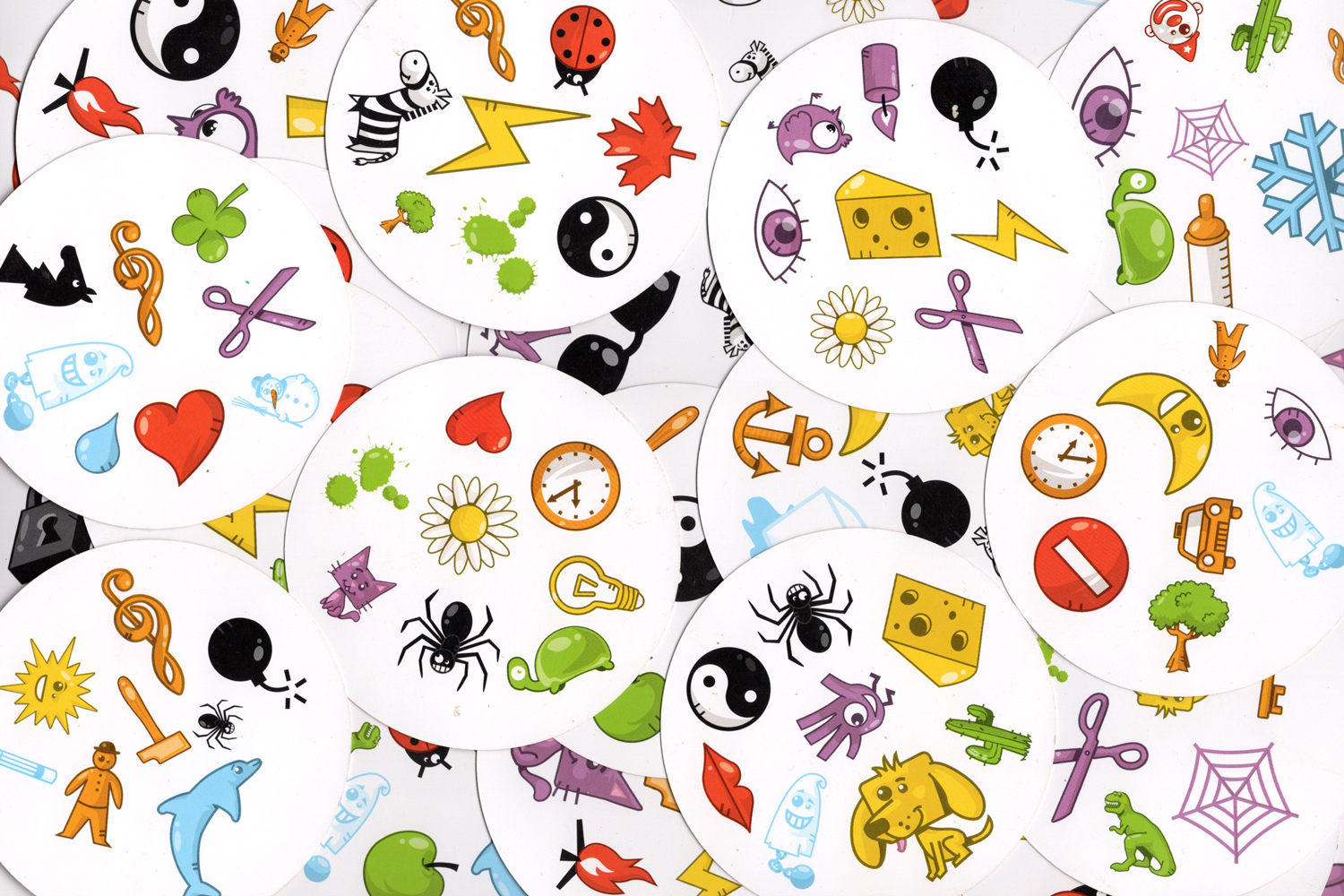 All of the 2-8 players are constantly involved trying to find their pair. It is also quick and inclusive. I have played it with my youngest son when he was 4. Granted, we created a house rule for older players that we had to count to 3 in our head before making a match to give him a fighting chance. For me, this is a much better option than splashing out on the Dobble Kids version. From 8+ no handicap is needed, although sometimes I wish they would count to 3 in their heads for me to win a couple!

You can go on a roll and suddenly every card has a particular symbol on and you just get in the zone, but equally other players have these spurts as well so it balances out in the end.

Below are two cards, how quickly can you find the matching symbol? 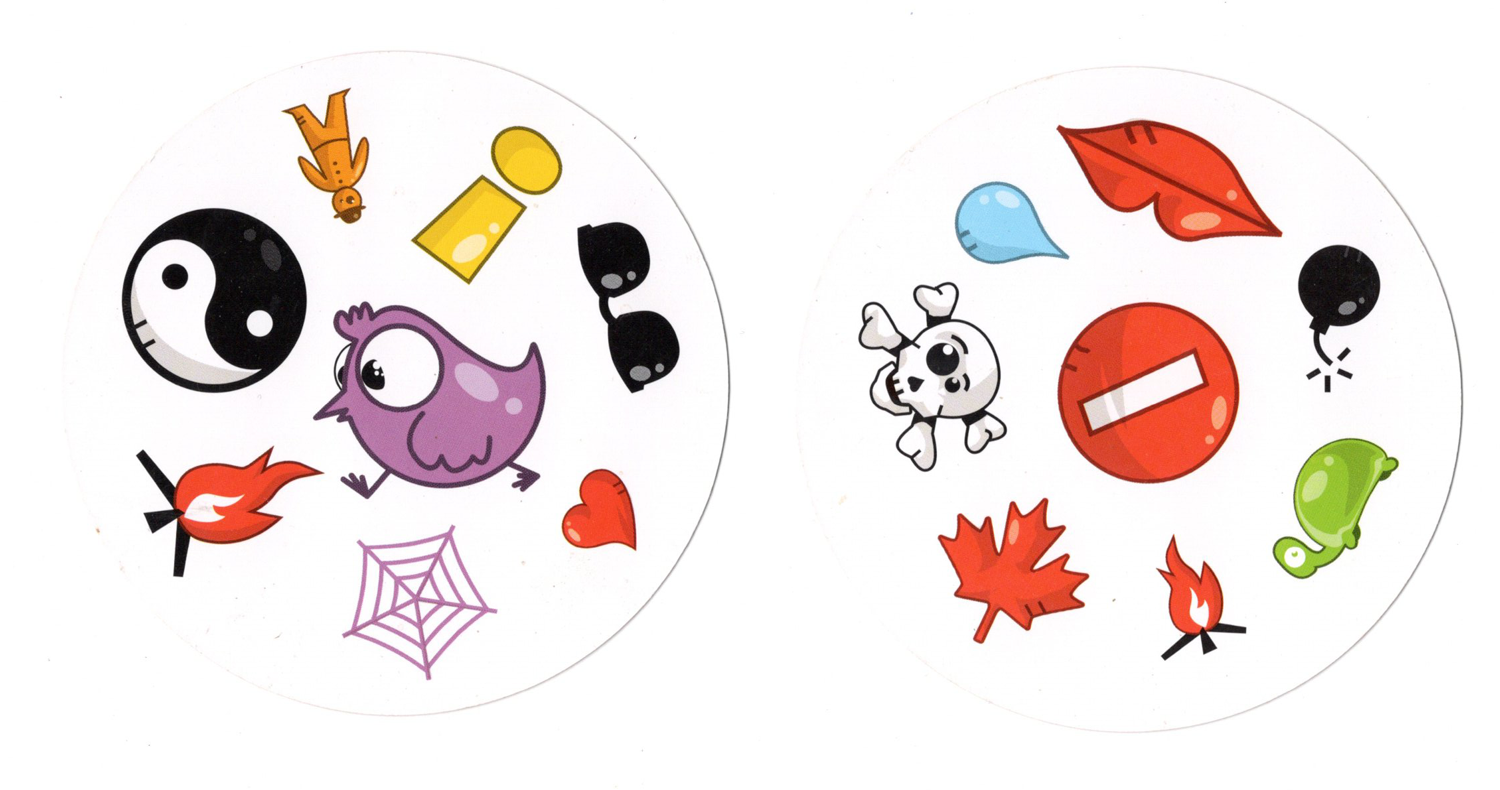 The cards are colourful and good quality. Strong enough to withstand the odd snatch or grab without creasing or tearing. The symbols are colourful and what you would want for a child to recognise and be able to identify. The small tin protects the cards and means that the card game is easily transportable.

Dobble doesn’t necessarily take up that much table space so it is also a perfect on the go game.

With the house rule discussed above in play no one has an advantage. This means we can all play together, including our youngest player, and it still be competitive and fun. That is rare in all but the best family games, to level the playing field and still enjoy the game as a so-called grown-up. It is also a game I would play without the kids. Its small tin lends itself to being transportable so it can be taken anywhere. It fits in your handbag if you are off to the pub and need something to amuse the younglings. It fits in hand luggage if you are travelling and you could even play it on one of the fold down trays on a coach, train or plane. It would probably even fit in a bum bag (fanny pack to American readers) if those things still exist. There is even a waterproof version for playing outdoors in the great British summer.

As I mentioned Dobble is also available in different themes such as Harry Potter and Star Wars. These have a good look and appeal to the fan bases. For me though, you can’t beat this original version for the whole family to enjoy.

Dobble is a lightweight game in more ways than one. The small tin certainly packs a punch bigger than its size suggests.  With an RRP of £12.99 this really is a game that every family should own and play.

If you already own Dobble and enjoy it, or are looking for other inspiration, you might also like these similar games: