G’day mates! A review of Catch a Roo must surely be a bonza excuse to use some stereotypical Australian slang if ever there was one. So you will have to indulge me because this review should be a ripper!

For this review to reach its full potential you will need to adopt your best Australian accent. The easiest way to achieve this is to read each sentence as if it is a question. Making your voice go slightly higher pitched as you near the end of a sentence makes it heaps better.

Now you may know Catch a Roo by one of its many pseudonyms, Kang-a-Roo, Kangaroo, Kango! or even Kaappaa Kenguru. This family game was designed by Dr Reiner Knizia and first published in 2009. It was nominated for the Årets Spill Best Children’s Game in the same year.

Catch a Roo was designed by the prolific Reiner Knizia. You might know his name from games like Through the Dessert, El Dorado or Forbidden City to name but a few. The game is currently published by the Green Board Game Company also known as BrainBox.

This game was given to my 7 year old son by Santa when the man himself conveniently visited Paulton’s Park on the same day as we did. Once the magic of Christmas was over and I had gone back to my day job, my wife tried to play this with my three boys, but had to abandon it as she could not fathom things out. About eight months later the boys rediscovered it lurking in a toy box and asked me to decipher the rules. I did, and within five minutes we were playing. Now the reason I share this with you is for a couple of reasons. Firstly, to highlight how bad my wife is with board game instructions, and secondly, to pad out this Gameplay section because it is really easy to play.

Deal five cards to every player and an additional pile of five which goes to one side. The 11 differently coloured Kangaroos go in the centre. Each player lays one card and takes the corresponding Roo, always drawing back up to five cards. At some point you will lay a card that matches a Roo someone has already claimed. As the name of the game suggests, it is at this point you will catch their Roo. However, if they have the same colour card they can lay it to block the steal.

Play continues until the deck is used up and the first player has run out of cards. At this point the winner is the player who has caught the most kangaroos – fair dinkum!

This is a lightweight kid’s game without question. While the box suggests seven years plus, there is no reason why a five or six year old couldn’t play, they might not win but they will still have fun. The publisher’s reckon three to six players can battle it out in this hand management game, four to six people certainly seems good when I have played it. The snatching of kangaroos feels personal but never devastating.

The game itself is very quick and you are constantly engaged as people could be snatching your pieces. Play time is about 10 minutes. Quick enough that you will normally play a second game, or a third.

In my house, we play this game with the kids regularly after dinner. I also, perhaps ashamedly, play this as an end of the night filler. With so-called grown-ups there is often a little quip like ‘I didn’t want that one anyway’ or ‘white isn’t even a colour’ said in a dreadful Australian accent as your piece bounces away from you. Blocks will be accompanied with a ‘Nope’ à la Exploding Kittens or, depending on alcohol consumption, something ruder.

I personally love the brightly coloured kangaroo playing pieces, as do my family. They really grab your attention. The little miniatures bounce across from player to player really nicely and I think you would struggle to not describe them as cute. I am actually surprised by the quality of these, bearing in mind its RRP is under £10. The cards are bright and nice quality too – perfect for a younger audience.

The box is small, but could be smaller and I am lead to believe it has shrunk since I was given my copy. Catch a Roo could almost fit in a Love Letter size bag. This makes it very transportable, and although not a travel game it is certainly one to take with you for when you get to wherever you are going. 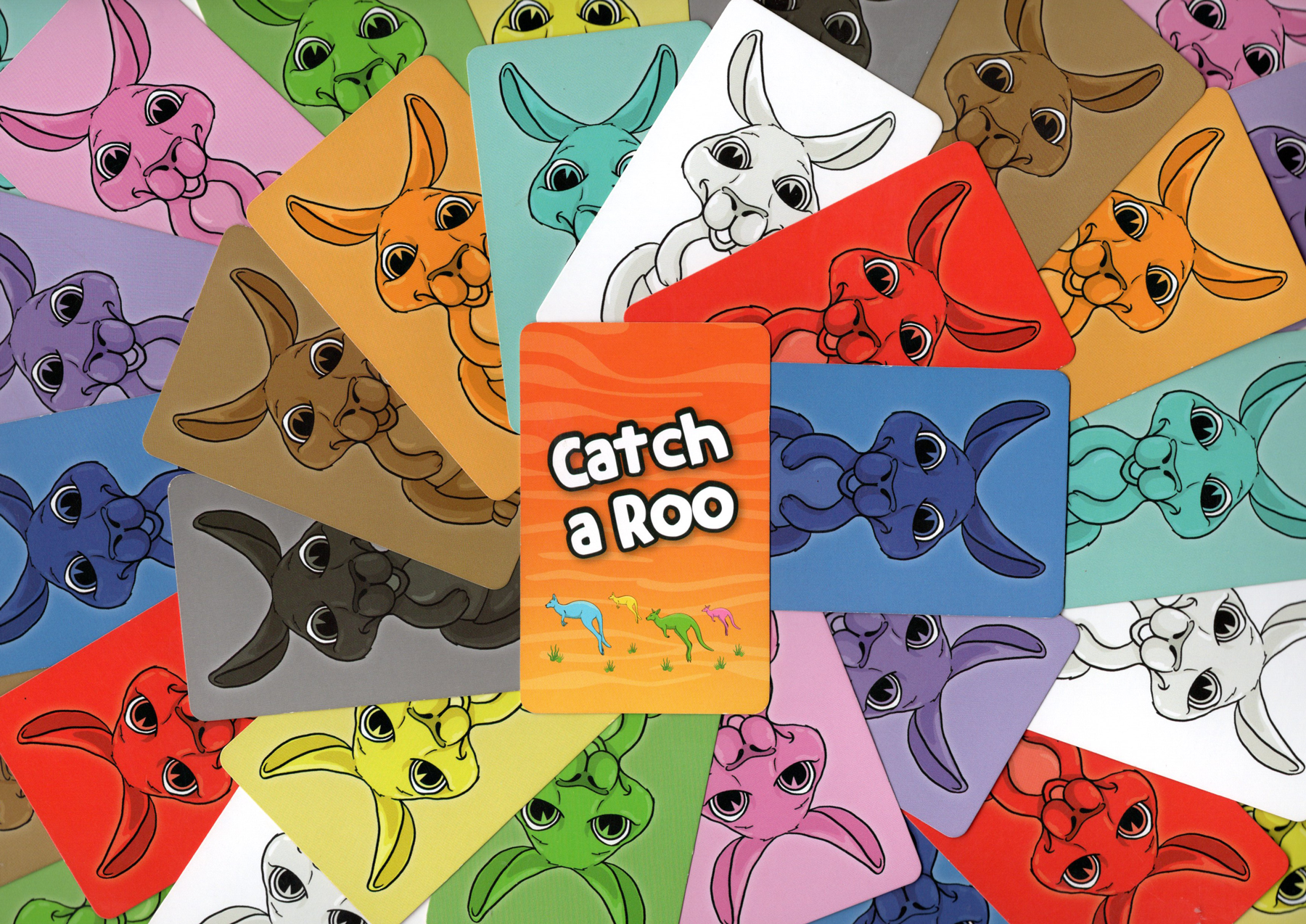 In Defence of Catch a Roo

When I do a review I formulate my own opinion, but I inevitably read other reviews elsewhere. Now I feel like Catch a Roo has previously been given a bit of unfair bad press. Based on these I would not have ever bought this game and yet over the last two months it has been one of my most played games. Thanks Santa.

I read the following comments on the Board Game Geek website:

“If you start counting the cards, you’ll win”, “You’ll clean up if you have a good memory.” and “it’s a good introduction to some card-counting tactics”. Clearly written by a dingbat wanting to cause me aggro. This is incorrect, the very reason you deal out five cards at the beginning and put them to one side means that card counting is impossible. You cannot know what is in the deck you flaming galahs!

“No fun for adults only.” You are entitled to your opinion, but on this occasion it is the wrong one! I have fun with this game and I am an adult. Whenever I have played this with my regular gaming group (which incidentally includes an Ander-roo) or others, we have fun due to our silly accents and banter, other people should too.

“Game with a very limited decision space, even for a kids game.” Strewth! You need to decide when to play a certain colour card… do you hold back the two of a kind for later in the game when you can snatch it and then have a card to defend it. Do you use them as a double-attack, or just play it now? Do you take a kangaroo from the middle or launch an early and mean attack on someone who has got a Roo already in front of them? These are decisions and no, they are not massively impactful but, they can affect the game. I admit there is quite a bit of luck in this game, but I have already said this is a lightweight game intended for kids. I’m just arguing that if played with a pinch of salt it can be fun for adults too. Especially at the end of the night when wine or beer has been plentiful.

Finally I have read: “Quick to play and easy for even younger kids to understand.” At last someone else’s comment that’s bonza!

Final thoughts on Catch a Roo

I was actually quite stoked to get to do a review of this game as it has become my board gaming guilty pleasure. I understand that I like Catch a Roo more than I should. There may be a time in the future where I get a bit bored of this game, but we have been playing it lots and I have not tired of it.

I think it is reasonable to say that if this game was a boxing kangaroo it wouldn’t be featherweight, it wouldn’t even be flyweight, nope, this game would certainly be fighting in the strawweight division. So what? The game is lightweight – this is not a negative.

It is great for kids, easy to learn and the snatching of other player’s Roos is a bonus. An opportunity to be mean to a sibling without getting in trouble is certainly not wasted on my three boys! As it is part of the gameplay and you can only choose from the cards in your hand there shouldn’t be any tears before bedtime over Roo theft. I’m not saying you will remember ‘that’ victory in the same way as you might with a Eurogame or RPG but it is competitive and fun. That is, if you are willing to get off your board gaming high horse and just accept it for what it is.

I will also add, it would make an excellent stocking filler – obviously the reason Santa got it for my son. It would also make a great present for a child’s birthday party where you don’t want to spend too much – there isn’t much anymore you can buy for under a tenner! My kids would all recommend Catch a Roo regardless of the price, it just makes it a bit sweeter.

This family card game with its awesome playing pieces makes my Top Ten games that I enjoy playing with my children. I do admit though it is a long way from making my actual Top Ten games. To be fair to Catch a Roo, you don’t buy this game expecting much. For me, it delivers more than it should and as a strawweight game it still packs a bit of a punch! Seeing children play this game and enjoying it cements its place in the Board Game Review Hall of Fame.

If you already own Catch a Roo and enjoy enjoy it, or are looking for other inspiration, you might also like these similar games:

Buy Kang a Roo
from Amazon 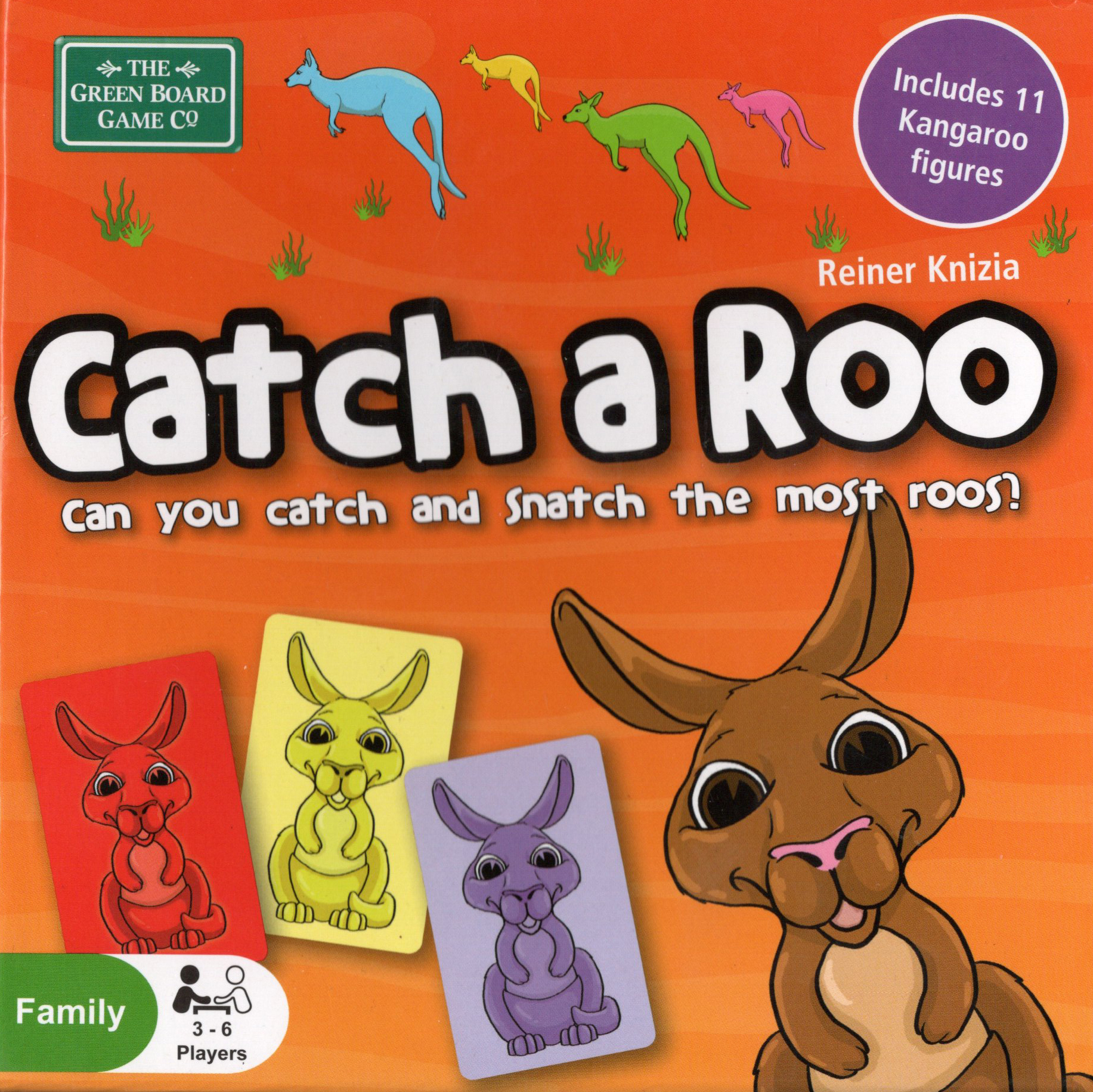 For clarity. We don’t get paid for our reviews. We were given this game by Father Christmas but paid with our own money to enter Paulton’s Park to see him, this has not affected our review in any way.

Dobble Review Through the Desert: Game of the Month, January 2020