I’ve often thought that there aren’t enough card games about coprolite. Actually I haven’t. I rarely think about fossilised dinosaur poo unless I am rummaging on the beach at Lyme Regis. Well regardless of any of that preamble, Dino Dump is a card game that features dinosaurs having a poop.

It is from the rather cool people at Big Potato Games. No wonder they are hip and trendy, they have been teaming up with BBC Radio 1 DJ Matt Edmondson. As a result they are getting a bit of a name for themselves for producing awesome party games. Games like Obama Llama, Chameleon, Bucket of Doom, and Don’t Get Got are all theirs. So is this just as brilliant? Well, let’s find out!

The box describes itself as ‘a speedy card game about dinosaurs and poo!’. We’ve established that already! It also says it is for ages 6 and up (but my five year old can cope). It also informs us that it is for 2-4 players. Although the higher player counts play better.

Dino Dump is based on the popular pub card game Sh*thead. The rules and cards are a bit more streamlined. They needed to be, as it was virtually impossible to remember what all the different cards in a standard deck did. Especially as it often varied between groups of friends. So the refinements are welcome and makes it more accessible to all ages.

The sanitisation of the name helps, although I told my children it was based on a game of Sh*thead without really thinking. They thought this was hilarious and I realised the error of my ways.

Setup involves placing three cards face down in front of you, these will remain a secret until the end. On top of these are three face up cards, and three cards enter your hand. A swap of your face up cards and the cards in your hand is allowed and then you are off.

The aim of Dino Dump is to lose all your cards as fast as possible. To place a card on the discard pile it has to either be the same number or higher than the preceding card. Power cards give you a special ability and can be played on almost any other card. If you have multiple cards of the same number you can play them at the same time. Whenever you play a card you draw a card. If you cannot play a card you have to pick up the entire discard pile… which often really hurts. If the draw deck is used up and you use all the cards in your hand you get to play the cards on the table in front of you. Eventually, blindly playing the face down cards too. 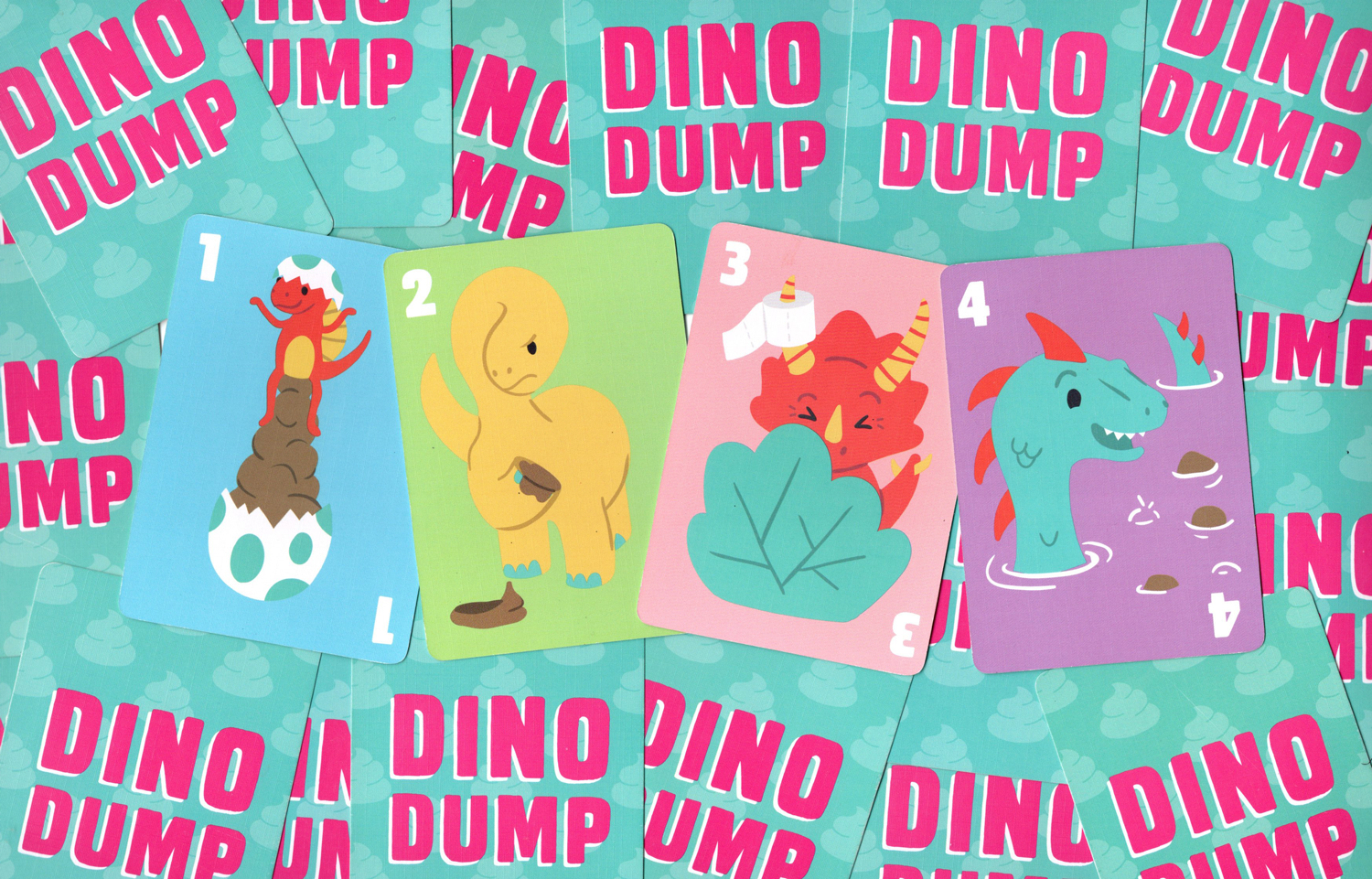 Play moves round the table very quickly. Game time is generally around ten minutes. While the rules for laying and the luck of the cards dictates most of the play, enough little bits of strategy do creep in. This tends to be slightly vindictive towards the player in the lead where possible.

Any children at the table will know what they are doing very quickly. They add a little bit of random to the game, occasionally doing something unpredictably waffy that can have disastrous consequences! This stops it being boring too and is a welcome addition to the gameplay.

There is a small amount of elimination as you are meant to whittle it down to the loser who wears the stinky sticker of shame. Our house rule is to ignore the stickers and just play for first place. This particularly helps when playing with children to avoid the ‘you’re a loser’ element. It also stops successful players missing out on game time. Although it is so quick you wouldn’t be waiting long, even if you were playing it by the full rules.

The standard-size cards are colourful and what you expect from Big Potato Games’ cards. All numbered cards feature a dinosaur and poo. The power cards have different Jurassic-type themes too and are equally eye-catching. The power cards all say what they do on the card so there is no ambiguity or checking fact sheets. Numbers are in the top left and bottom right corners only, which I know annoys some people who hold their cards weirdly. I however, have never understood this gripe!

The box is small but space is dedicated to a ‘surprise’ under the cards moulded into the plastic insert. The rules are nicely illustrated, clear and concise.

Included in Dino Dump are the loser stickers. These are repugnant. The smell is akin to your breath after eating a garlic supplement intended for horses, an experience not to be recommended. I wish in hindsight that I had never opened the packet because, despite sealing them in a baggy, the aroma still wafts from the box on every lift of the lid. I also wish I had never experienced a horse’s garlic supplement either but that is a long story from when I was a kid!

The game’s small size makes it fantastically transportable. Its requirement to have three cards in front of each player probably limits it being played on the move on a train or aeroplane. I can however imagine sitting on a balcony in a hot sunny country playing this with the kids on holiday and continuing after they have gone to bed.

It is a lighter game that will not give you brain ache in the same way as some others. Not all games have to be that to give you entertainment!

With an RRP around £10 you will get plenty of value out of this little card game and should never regret parting with your pocket money for it. At this price point it also makes an excellent present for a child’s birthday or Christmas present, especially when you are on a budget.

Dino Dump is good, simple, family fun. The quick play time inevitably leads to the ‘shall we play again?’ scenario and you will be pleased when everyone says yes! You can play this as a filler too, despite the element of luck you can have some vindictive fun without the kids.

If you already own Dino Dump and enjoy it, or are looking for other inspiration, you might also like these similar games: 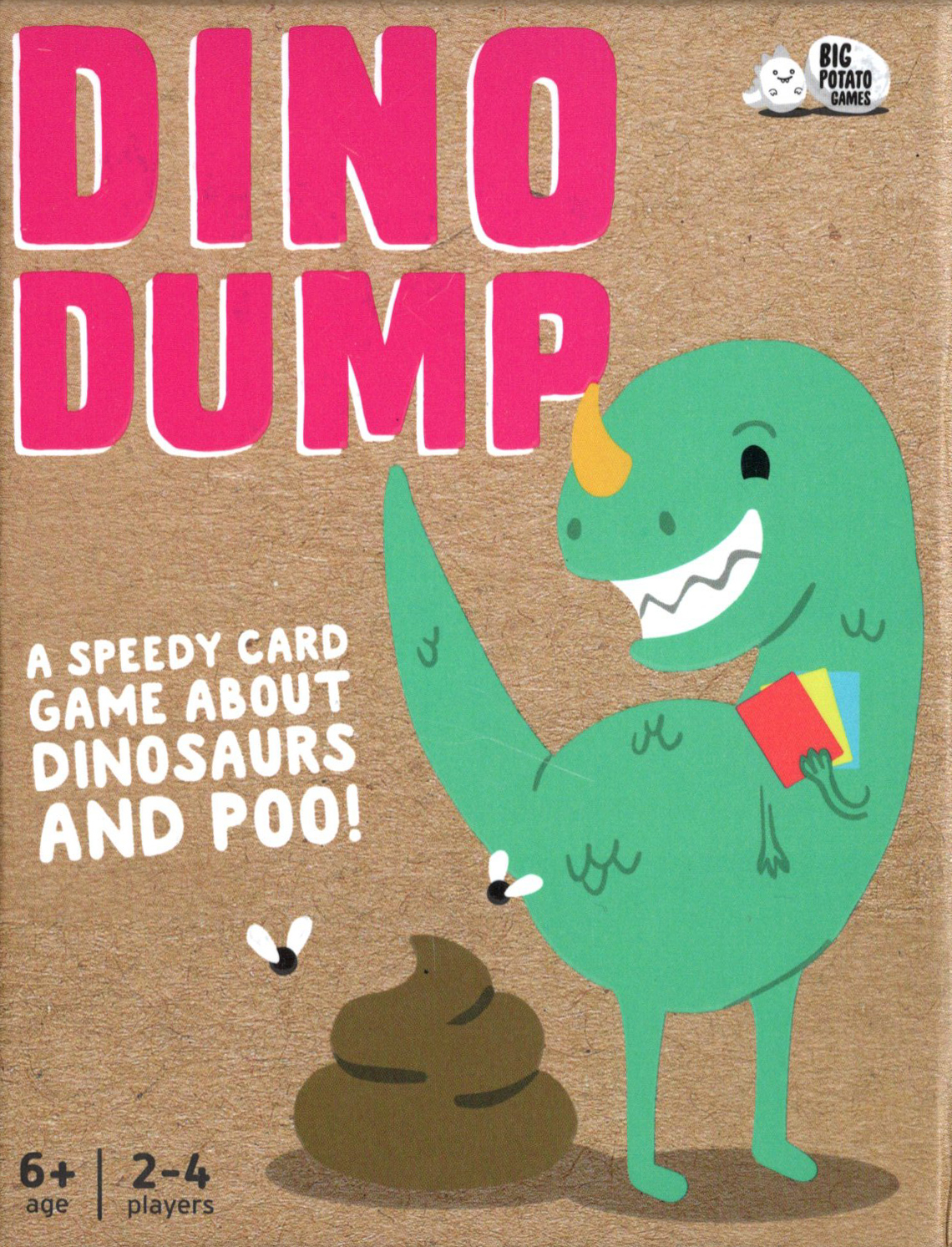 Buy Dino Dump
from Out Of Town Games

For clarity. We don’t get paid for our reviews. My sons were given this game by their auntie who is not affiliated with the game, this has not affected our review in any way.