Do you remember that 1995 award-winning game by Spartaco Albertarelli called ‘Category’? No, neither do I, but by all accounts, Tags is based on that. Unsurprising really as it is born from the brain of the same designer. The game itself can be described as a fast-paced word game for quick thinkers.

Now, I may not remember the game Categories, but I do remember some other word-based games that have appeared over the years. Scattegories, Articulate, Taboo, 5 Second Rule and Think Words to name but a few.

So, is there room on the market for yet another word game? Well yes, there is always room for another game in any genre if it is good enough. That leads on to one more question: Is Tags any good then?

Tags is a game for 2-4 players, but it can seat up to 12 if you team up. I must confess that I haven’t played more than four. However, after reading through the rules, there is no reason why teaming up wouldn’t work, but who wants to share victory? I really must stop asking more questions, rhetorical or otherwise. The two-player game does lack a little, so for me 3-4 player is best.

It is stated for ages 10+ and I have no qualms with that. However, it is much better with players of similar abilities and I’m not sure a group of 10-year-olds, unsupervised, would be okay.

The box says it takes 30 mins. To be honest I haven’t timed it – I’ve let you down on that front. It is really fast-paced and actually I think the time estimation is fair. It certainly feels like you could play through in less than 20 minutes if you are all on the same page.

The premise of the game is that everything can be labelled, categorised, sorted by topics or given a ‘tag’. I reckon this is because the designer did not want to just call it Category 2.0. The tags theme, for me, seems a bit contrived. The cards are tag-shaped to reinforce the theme but after that… I’m not sure. Anyway, don’t let any of that put you off.

The board is laid out in a grid-like formation. Along the top edge are five Topic Tags. These fall into 11 broad subjects such as Language, Sports or Famous Brands. Within this is the subject for the round, like ‘Things Made of Wood’ or ‘Australia’. The left edge is made up of four Letter Tags. These are mostly the first letter your word should start with but there are a couple of variants on this theme. All these tags cards flank the central board which hosts a group of randomly-placed marbles in three colours.

The rules suggest the oldest player starts, but it doesn’t matter who starts the game as every player gets one turn at starting first.

Each player gets 15 seconds to say as many words as possible within the constraints of the Tags. For each correct word you get to swipe the corresponding marble from the board. For example, for ‘Things Made of Wood’ you might say Table, Door and Peg Leg, assuming you had a T, D and a P on the left hand side of the board. This would earn you three marbles.

Once 15 seconds is up on the egg timer, play passes to the next player. The board easily rotates, turning to face them. Play continues around the players until either all the marbles are gone, or it has moved around each player for 15 seconds with no one getting a correct answer.

I should mention that if you manage to take the last marble in a topic row, you also get to keep that Topic Card. This earns you points depending on the difficulty rating of the subject. This is visualised by stars on the card.

Once the round ends, you add up the score based on your Topic Card stars and your marbles. Now here is the kicker:

Remove all used tags and let the next person take the first turn. The game finishes when every player has gone first once. Therefore you are only going to play a maximum of four rounds per game, thus the quick playing time. 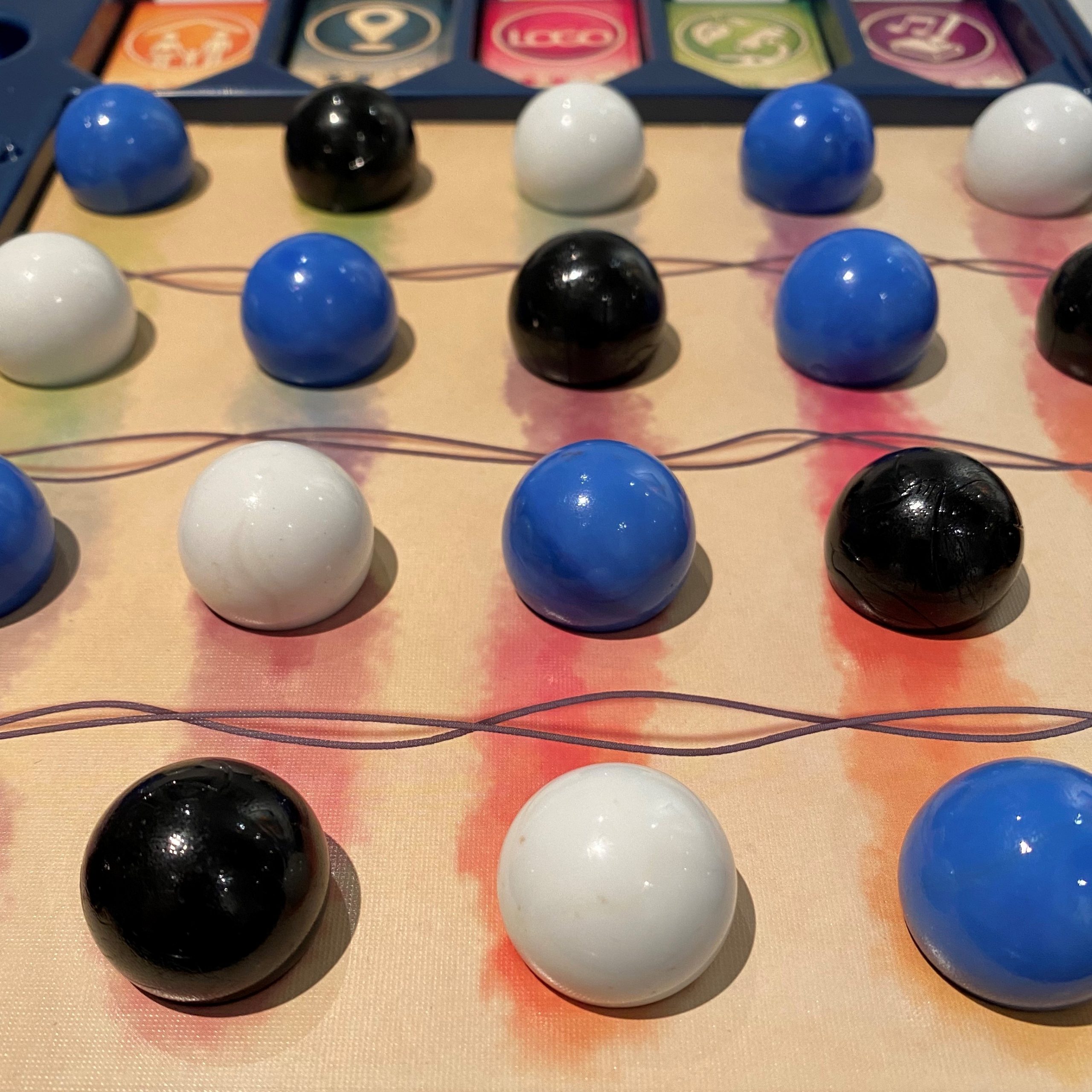 Tags is fast, and I mean really fast!! 15 seconds is really not long. You need to be a quick thinker and work under that pressure. Even when it is not your go, you are desperately trying to think of answers that you can use when your 15 seconds comes back round. Quite often, the time in between turns isn’t enough! You are never out of the game either. If you don’t get an answer in your 15 seconds but the next player does, you get another opportunity when play comes back round to you. You may lag behind in points, but this can be clawed back sometimes with fortuitous marble placement or swooping for Topic bonuses.

The marbles are randomly placed and do not reflect the difficulty of the answer. This provides an added layer of tactics. Do you go for the three-point marbles, try to clear a column of topic cards for the star bonus, or do you just get as many as you can in the 15 seconds? That’s another question that will remain unanswered as it depends on your opponent and the game generally.

There will be times where your brain just melts and all of a sudden you lose the ability to think and speak. Fortunately most people have this moment at some point when playing Tags, so it evens out. There will also be times where you can’t help but snort at a ludicrous answer and equally sit in awe as someone clears far too many marbles for one turn.

With 208 Topic Tags and 32 Letter Tags there is plenty of replay-ability. I can’t be bothered to do the maths here but there are a lot of potential combinations. So if you were to get the same Topic come up, it would be unlikely to be coupled with the same Letter Tags.

Right and wrong answers are clearly exemplified in the rules so there are rarely arguments around this. My only criticism is that the rules state you have to contest an answer during the 15 seconds, which makes sense as that marble has to be returned to the board. However, if you want to argue your case the timer is still ticking. We get round this by answering with a different answer or holding the contested marble in our hand until the end of the 15 seconds when we can debate it further. Usually, you know when your answer is a bit dubious so you accept the majority ruling.

The rules also offer alternatives for a Team Game that seem plausible on paper. It also offers ways of altering the difficulty level which I have tried and it works quite well. It suggests giving younger players a couple of turns of the timer or removing cards with higher star ratings (which tend to be harder topics).

I do have one little gripe with this game and that is the scorer. It goes from 0-25 and every time you pass 25 you get a token. This might just be me, and I kinda hope it is, but if a player is on say 17, a likely score for a round, and on the next go they get say 19, I really struggle to know where their playing piece will end up. Ultimately, you have to actually do some mathematics when passing the 25 point mark. The equation being: (starting point + score) – 25 = where the score marker should be.

It just isn’t as intuitive as the 100 of Ticket to Ride or even the 50 of Carcassonne. Even 20 would’ve been better. The extra five just doesn’t feel right and I end up counting one space at a time like I am a seven-year-old playing Monopoly.

The box, rather neatly, doubles up as the board. The Tags fit all around the edge in their own little compartments. Unless you shake it really hard the tags pretty much stay in place when stowing it away, with the L-shaped scorer acting as a lid. That said, I don’t think it would fare too well if you store your games on their side. The central grid lifts off to stow the marbles, score markers and egg-timer below. I must say it feels like everything has a home and has been ergonomically worked out. That is with the exception of the rules, which fit on top of all this loveliness but protrudes the edges in a very non OCD-friendly kind of way.

The bowls to store your marbles in feel a little flimsy, yet they do the job. The score markers are small different coloured cones more akin to 1989, when ‘Category’ was produced, rather than the here and now. I guess we are spoilt and have come to expect something a bit more. There is nothing wrong with them, they just could be better.

In contrast the marbles are a good and generous size. They are actually quite brilliant and feel substantial when you lift them from the board. Inevitably this is accompanied by a certificate smile on your face because you got the J and everyone else had failed before you. A certificate smile being that feeling you got at school when you were awarded a prize but couldn’t let your proud emotions show because that wouldn’t have been cool.

My game came with a spare marble too, which means I can mix up the balance of points on offer and I have a spare. Handy if you lose your marbles, not so handy if you have already lost them! Overall, the game has a nice and colourful, but subtle, feel to it. I personally think it is quite good looking, perhaps even suave! 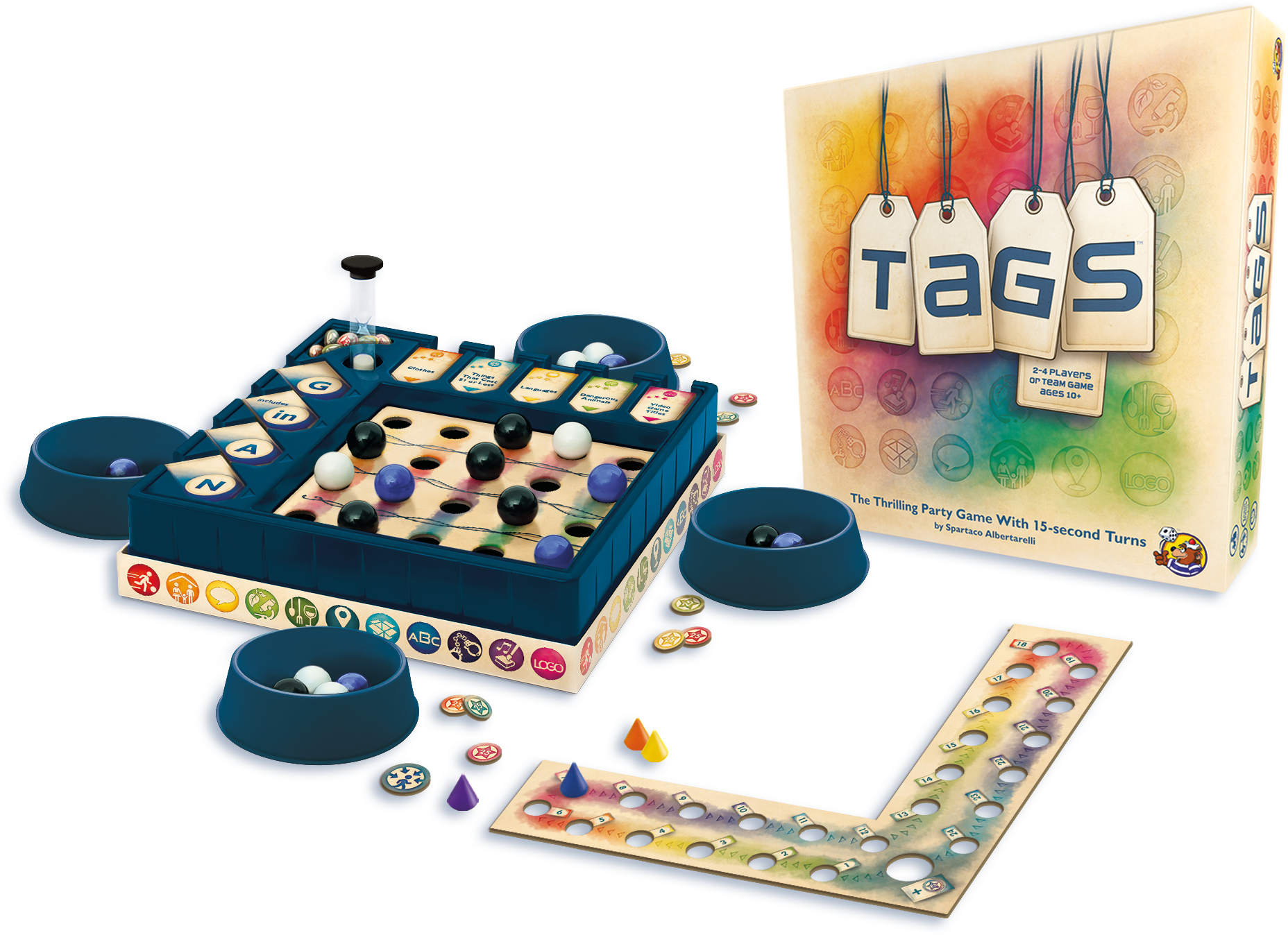 There are no hidden depths to this game, no mechanics to master and only minor tactics that can gain you the advantage. That said, it is a good game to play with non-gamers or as a filler.

To add resonance to this opinion I will state that my wife loves this sort of game. I have, therefore, played quite a few. She also loves disaster movies featuring hijacked planes and the like. These two facts are completely unconnected however, and I’m not even sure why I am sharing the latter. What I do really like, is that whilst you need an okay vocabulary, you do not need any particular specialist knowledge, a bit of general knowledge helps but this is far from Trivial Pursuits!

As part of my research I have read up about ‘Category’ and unsurprisingly it looks older. In essence, it is the same game slightly updated, refreshed and considerably expanded from the original. That doesn’t stop this game from being good though.

Does Tags have enough about it to muscle-in on the already heavily populated word-based game genre? For me, I would say yes, yes it does. The pace, the concept, the replay-ability, and those big marbles, all create a very good and engaging game.

If you already own Tags and enjoy it, or are looking for other inspiration, you might also like these similar games: 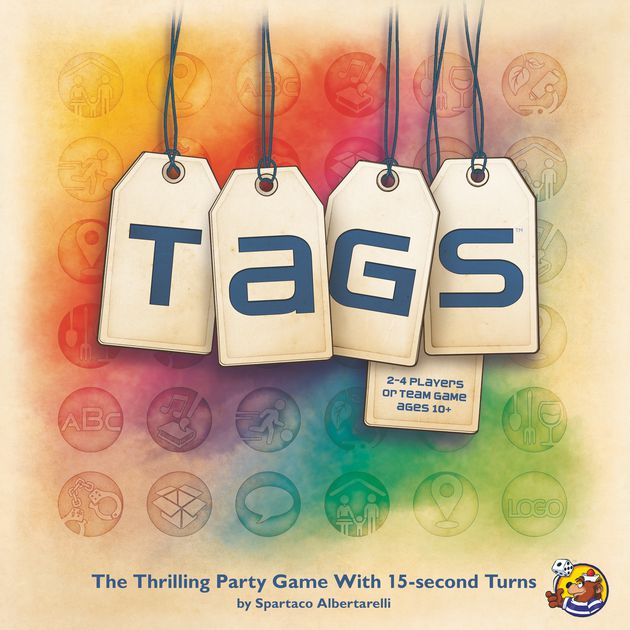 Top Of The Pops Review

Taskmaster The Board Game Review