It’s Christmas Day, my boys are opening their presents full of too-early-in-the-morning-for-me vigour and what to my wondering eyes should appear from Father Christmas but the Fortnite edition of Monopoly. Imagine my excitement… okay you don’t know me so I should explain my excitement… I would’ve been more excited with a lump of coal because it would burn longer. My ten year old son however, was the polar opposite. Well nearly, he had put Pokemon Monopoly on his list for Santa and I assume the old beardy bloke in his eternal wisdom presumed that some of his friends might actually rather play Fortnite Monopoly than a Pokemon edition and that perhaps my son would’ve asked for Fortnite Monopoly had he known of its existence. It was okay, he didn’t seem fussed either way.

Is it just another reskinned Monopoly with different characters and place names I hear you ask? Well actually, and rather surprisingly, no… and what’s more, I think it makes it better.

This version of Monopoly as the name suggests is a merchandise tie-in with the hit computer game in which you and your mates go and kill a load of other people and try and be the last man standing – think of a cartoon-like and less grizzly Hunger Games.

Back to the board game and the box says it is for ages 13+. My son is 10 going on 11 and with a little help from me regarding the rules he grasped it pretty quickly, as did my middle son who is 7. I doubt they would be able to play it together unsupervised, with me playing alongside they were both absolutely fine though. The box also states that it is for 2-7 players, I can’t see why this wouldn’t be true but I have only played it with 3, 4 and 5 players.

It boasts 27 pieces in different outfits, but call them “skins” if you want to be down with the kids, and this reflects one of the key aspects of the video game. The board is recognisable to all, but the places are areas of the electronic game and those familiar with it will recognise names such as Loot Lake, Dusty Divot and Tilted Towers.

Here is where the game starts to get different, because of the number of characters they are made from card, rather than little metal relics that you will be used to – “no biggie”. There is also no money, instead you are issued with 15 HP [Health Point] tokens and, wait for it, you start on whatever square you like, in the video game this would be where you “drop in” (after thanking the bus driver of course). You roll two dice, one of them is standard, which moves your character around the board, the other gives you an action that you can do before or after you move. The action die comes blank with stickers to stick on, please learn from my mistake and do not let your child stick these on, perhaps this is the real reason why you have to be aged 13 plus! This custom dice has four actions:

With that bamboozlement said, what else is different? Well, you don’t pay for properties you just get them if you land on them, a bit like other younger-kid friendly versions of Monopoly. If you land on a property that is owned you lose a varying amount of HP.

The community chests resemble the in-game loot chests that contain weapons and power ups. This is echoed with the rewards from these cards – and they are quite often game changers. The chest items are generally weapons which tie in with the game in terms of rarity. Some are single use, others stay with you, like Legendary Items which allow you to cause 4 HP damage instead of 1 when targeting players. What’s more you can combine them, often with brutal consequences for your opponent. The chance cards have been replaced with Storm cards, these reflect the impending and ever-shrinking poisonous storm cloud of the electronic version. These cards go over squares of the board (even ones owned by players) and generally cost you more HP points if you land on them. A Storm card is also drawn every time you pass Go, along with 2 HP (not the £200 you’re used to I know!)

When traversing the board you can never go over 15 HP which means you always have a chance of beating someone else. You are out of the game if you lose all your HP, any power ups are left on the square you died on, ready to be claimed by another player which is quite a nice twist that echoes the computer game. All you can do if you’re out is “take the L”.

The final, and perhaps best difference, is the playing time. All-day battles will never occur with this version, it’s more likely to take you around 20 to 40 minutes. 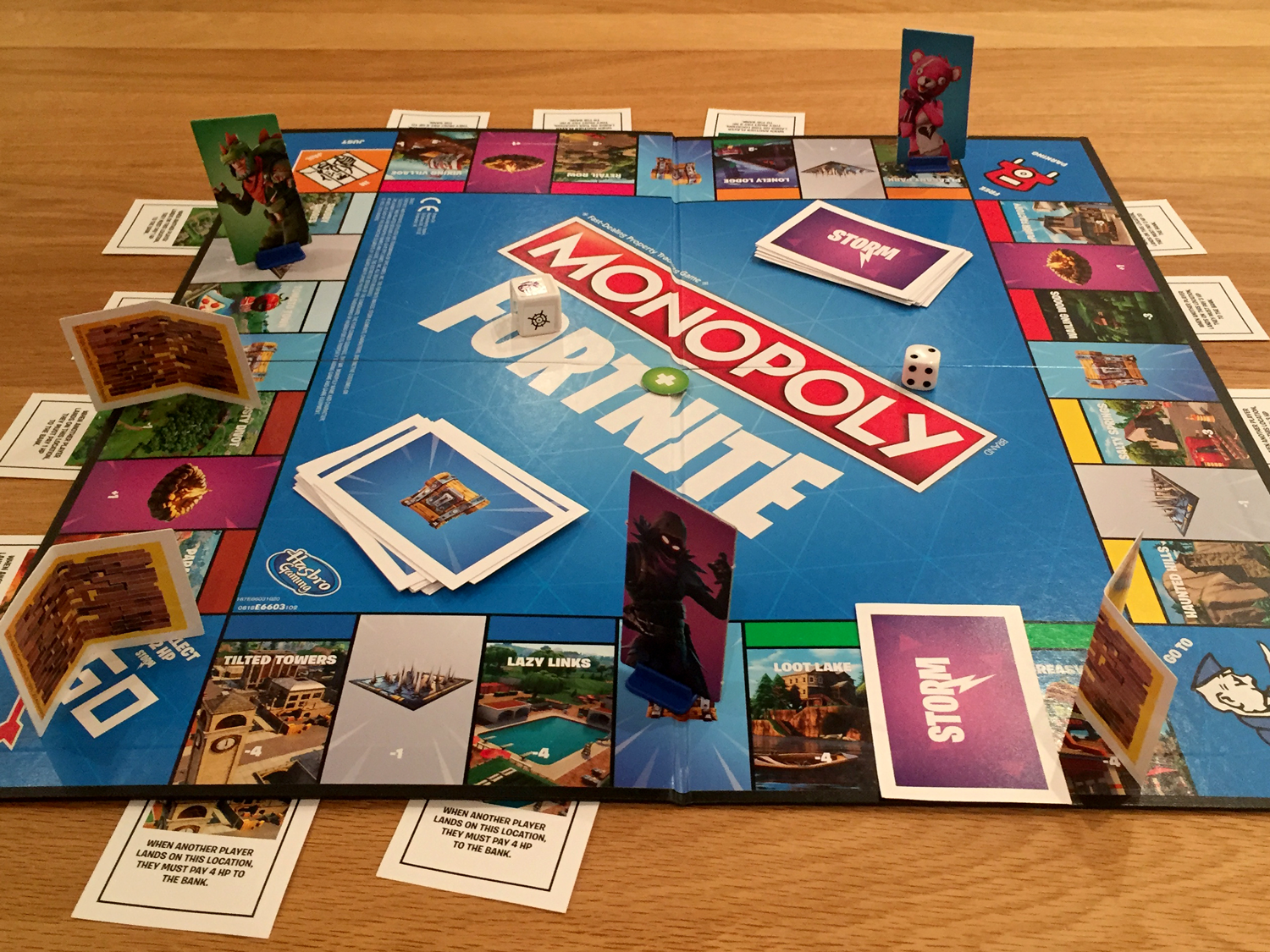 Perhaps it is because I approached it with zero expectation, but this weird little mash up of a game was a surprise. Unlike regular Monopoly I was okay to play another game of it the next day.

You can also play as a giant pink teddy bear or a man in a dinosaur costume and be cool. It is probably worth noting that this does not make you cool in real life, especially when picking your children up from school in similar fancy dress – apparently that’s “embarrassing”!

In contrast to what you might be used to, you can play this version without one player gaining total control. The gameplay itself strangely doesn’t seem as vindictive as in other versions of Monopoly, which is odd as it is about killing people not just robbing them of their home and money. It is harder to gang up on one person, I guess you could, but the ‘line of sight rule’ when shooting people hinders this, there is often therefore no choice who to target. This games has so far not created that hostile atmosphere you can get in regular Monopoly.

The trading mechanic that almost defines the regular version takes a definite back seat in this one, you still find yourself trying to wangle some power-ups in exchange for HP but it is certainly not as prevalent, nor for that matter is the properties as you don’t benefit that much from owning them, only owning a street has benefits, but even then it is a secondary part of the game.

Fortnite Monopoly is a game of luck. Chest cards and dice rolls are the main mechanics of the game and ultimately what decides the winner. If you are looking for a game with skill or strategy this isn’t it. The hardest decision you have to make is where to start and where to place a wall. I’ve played this quite a few times and my ten year old is just as likely to win as me. Wins and losses therefore don’t carry the same weight as in some other games. 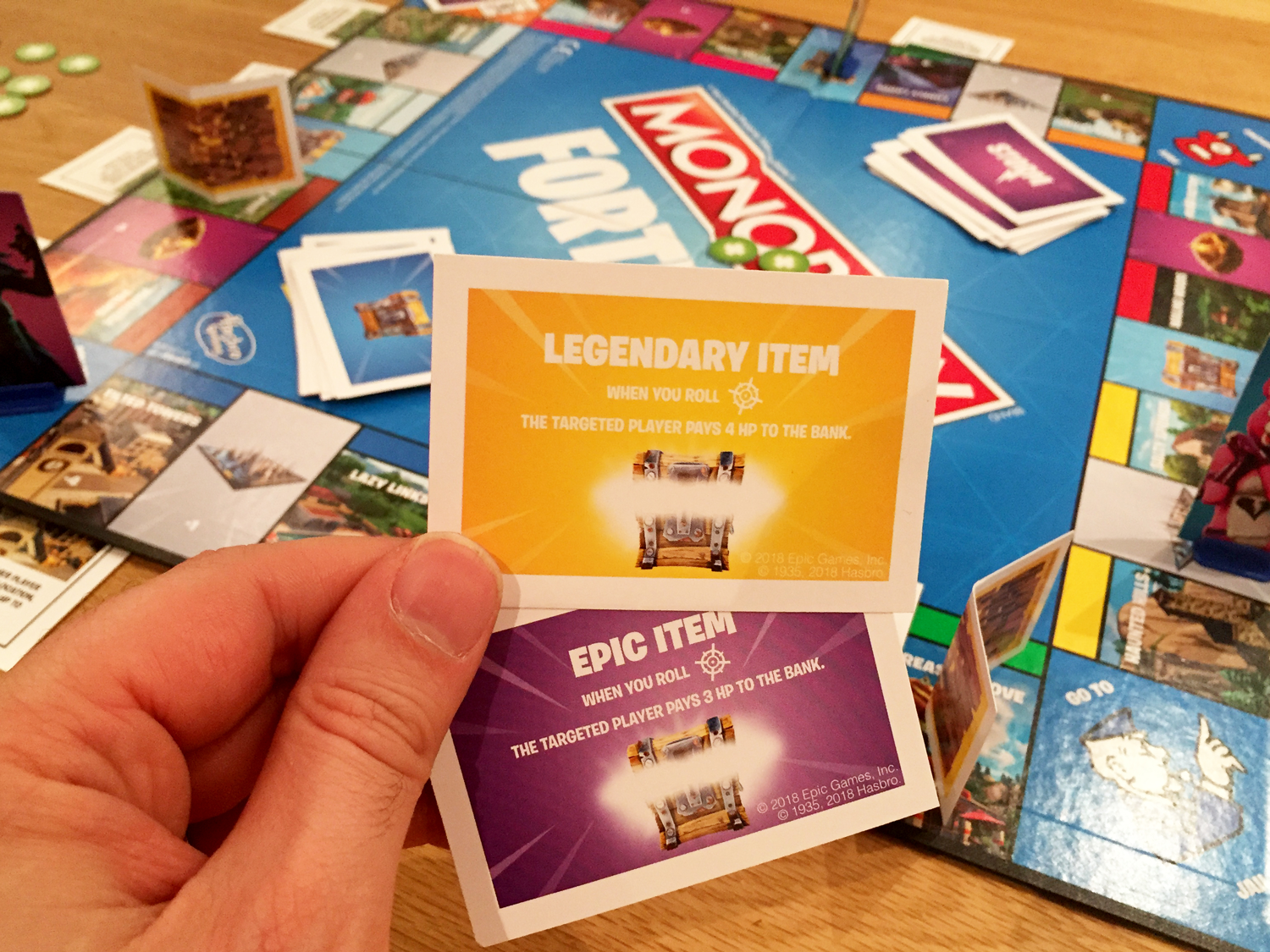 What my 10 year old thought

I asked my son to write down what he thought of the game, here’s what he wrote: “I don’t think it should be a 13+ just because it is Fortnite, my 7 year old brother can play it. I like the fact there is some variety of best Fortnite skins up to season 5, e.g. Skull Trooper, Black Knight, Rex Omega, Default, Raven and Cuddles Team Leader. There are also storm cards that can be advantageous or disadvantageous which I like and wall cards.” So there you go, bet you’re glad I shared that.

You know what to expect with Monopoly, the game board, cards and things are all of a good enough but ultimately meh quality. The characters are thick cardboard instead of metal enabling them to carry the same illustrations as in the game and they fit into those funny little plastic stand things that don’t have a cool name.

One thing that grates with me is that it doesn’t come with any sort of tray or way of separating the board from the cards and pieces which means they just languish and lollop around in the box getting muddled up or creased. This is utterly miserable and only made slightly better by the fact I am lucky enough to have a load of grip-seal bags I can use – if you haven’t, prepare to sigh and say “that’s a bit rubbish” when packing it away.

The instructions could be a bit clearer, especially around the wall mechanic but as long as you know you have to move first it makes more sense. You may want to consider some house rules too.

You’ve probably already looked at the score I have given this game and if it were solely me playing this game with my friends I would not rate it as highly. So why have I? Well, I’m not the target audience and my kids are, because of the Fortnite tie in they really enjoy it so it is rated through their eyes to a large degree.

I must confess I do prefer it to most other forms of Monopoly that are neglected in my cupboard gathering dust. For me, its best feature is that it isn’t actually just another version of Monopoly, although you will recognise the layout of the board, that is where comparisons stop and this is a game in its own right. Similarly, it isn’t Fortnite either. I would imagine a Fortnite board game could be executed so much better if it had broken away from the Monopoly brand. In fact, it could make a brilliant game now I come to think of it, oh hang on there was Last One Standing on Kickstarter – that was unashamedly influenced by this Battle Royale game, I wonder what happened to that? Regardless, this weird cocktail of the two is sort of okay, borderline good.

Fortnite Monopoly is definitely a game to buy if your children like Fortnite and they also like playing a board game. It is what it is, and that is certainly better than a lump of coal!

If you already own Fortnite Monopoly and enjoy it, or are looking for other inspiration, you might also like these similar games: 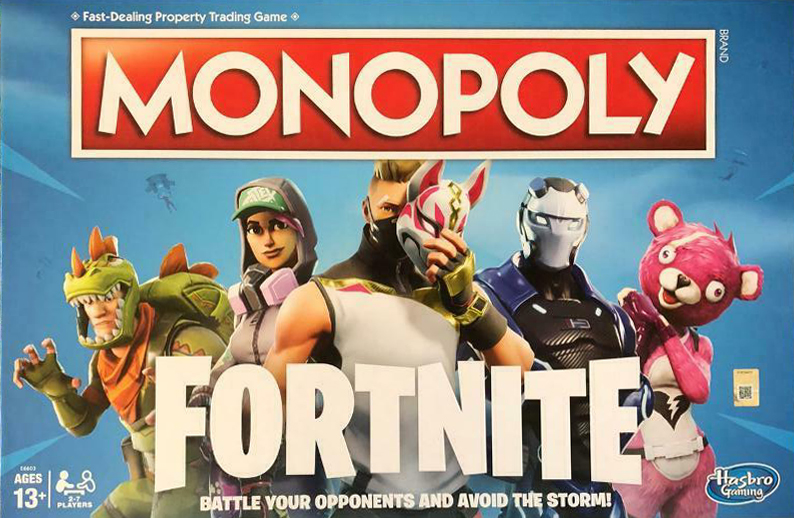 For clarity. We don’t get paid for our reviews. We got given this game by Father Christmas, this has not affected our review in any way.