I didn’t have to give any thought as to which board game to review first. Ticket To Ride was my leap into the modern board gaming world and therefore was a very natural place to start. It does hold a very special place in my heart, but don’t’ worry this review is not written through rose tinted glasses.

This original version, featuring an American map, was first released in 2004. Many additional maps and versions have been created subsequently and I’m sure you’ll read about some of those in the future! But for now step on board as the Board Game Review express is about to depart the station… full steam ahead…

The aim of Ticket to Ride is to obtain the most points. This is achieved by completing routes between two cities that are on destination ticket cards drawn from a deck. To complete these routes you will need to lay carriages, connecting various other cities together along the way. The longer the route, the more points you will get at the end of the game. The more carriages you lay between two cities will also affect your final score. Most tracks require certain colour carriages and to lay this track you will need to draw from a different deck of cards.

This may all sound a bit complicated, but actually the gameplay is simplified. On your go you can only perform one of three actions: draw destination cards to gain new routes, draw carriage cards to get from a to b, or lay carriages to claim a track. With these limited options the gameplay just makes sense.

Don’t get me wrong there is a bit more to it in terms of setup and how many cards you draw, how many you keep and that sort of thing, but I won’t get bogged down with that here – I will save that for a How To Play feature.

The game ends when one person gets down to 0, 1 or 2 train cars giving everyone one final go. Scores are then tallied with a bonus card coming into play for the longest continuous track. 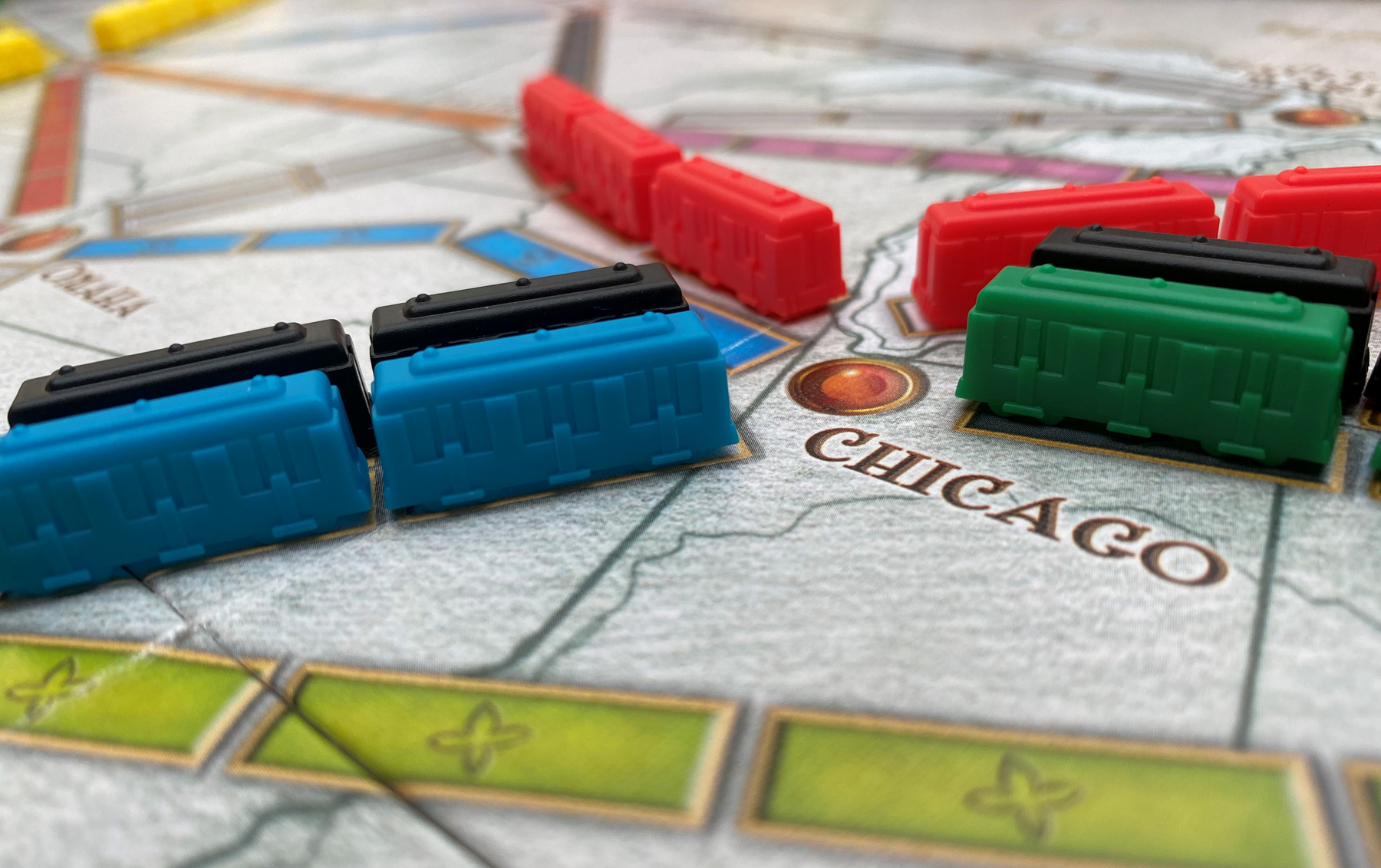 Once you’ve got the hang of the gameplay, layers of strategy are revealed. If everyone was sensible the start of the game would be a card drawing fest, gathering lots of carriages and routes and then planning the most efficient way of connecting all the cities. Players would then go on a track laying marathon.

That does not happen, especially with a higher player count. You see, the very clever board limits the amount of track between cities which adds an urgency to lay some track. This necessitates that you claim some crucial track early on to ensure your plans of becoming a railroad tycoon aren’t scuppered. This in turn forces other people to lay track, as they will be anxious you, and possibly other players, will block their route. And so it begins, a balancing act of build or draft.

Once Ticket To Ride gets a full head of steam it is actually quite stressful, but in a good way. You will be desperately drawing cards to give you the right number to lay track, nervously watching as others place their carriages hoping they don’t steal your route. You will also be keeping an eye out for the end of the game, hoping you have enough turns to carry out your master plan. This keeps all players interested and involved throughout the game.

One possible criticism of Ticket To Ride would be that the destination tickets could be more balanced across the board, something that is addressed with the 1910 Expansion. 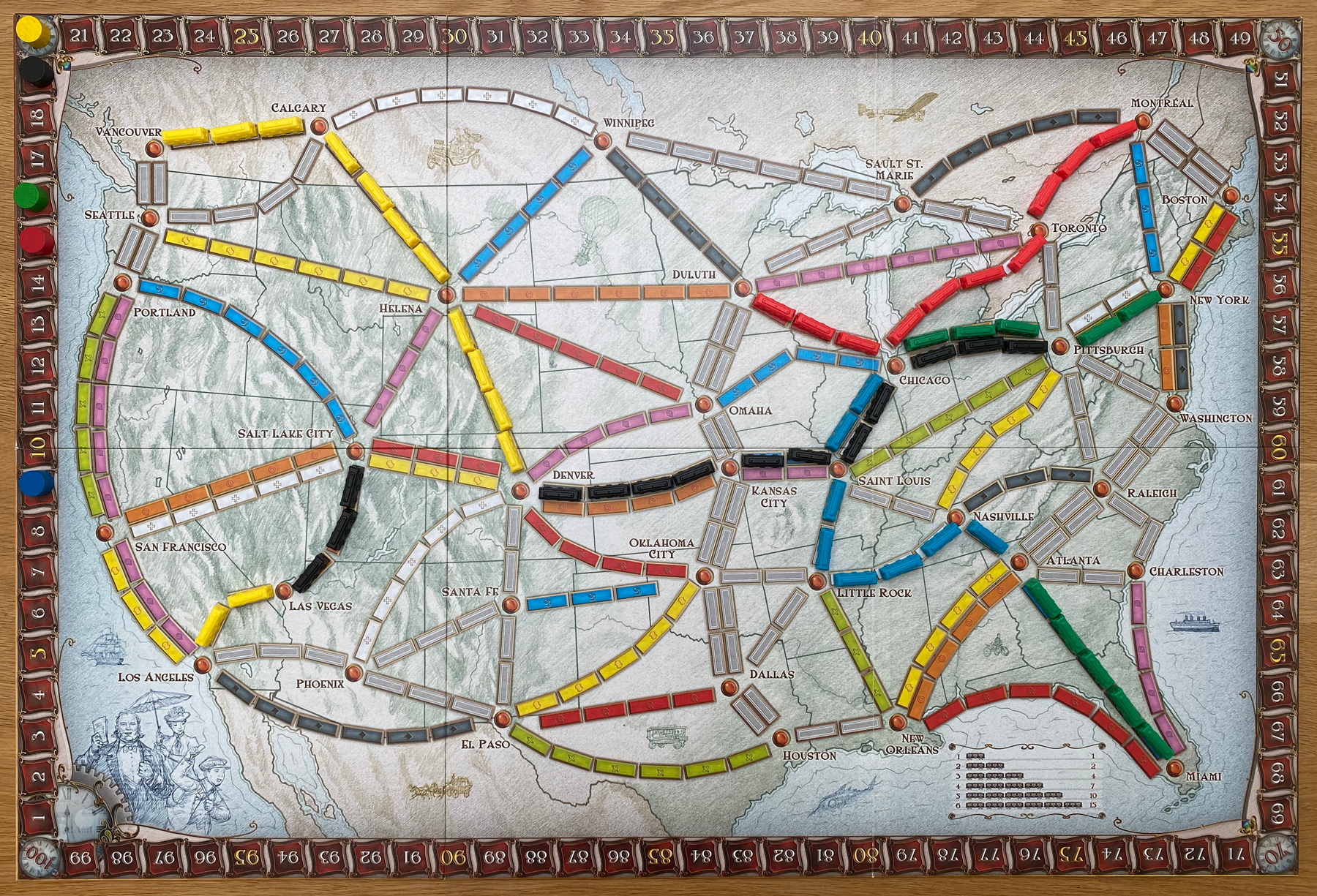 This is a good looking game. The board is a good size with colourful routes across it and a nifty score board around the edge. You need a bit of room to set up though as the board and the play area required is quite big.

The carriage or car cards are good looking enough. They could be a little bigger and I think Days of Wonder realised this quite early on as other versions have larger cards. The route cards are functional, but despite having dots to show locations these don’t always help you identify where exactly the city is on the board. I dare say this would be less of a problem for Americans but I’m not as familiar with where all the cities are geographically. You soon learn it though and it quickly isn’t a problem, other than the odd ‘err….’ moment when drawing destination ticket cards.

The little carriages themselves are brightly coloured plastic and are brilliant, they do exactly what they need to do – be seen and be counted.

Overall the railway theme is great and perfectly fitting. By which I don’t mean you need to don an anorak to play it! I mean the theme enhances the gameplay and it all works harmoniously.

Final Thoughts on Ticket To Ride

I have recommended Ticket To Ride to everyone I know. Everyone who has gone on to buy it has enjoyed it. This is the game you should be playing instead of Monopoly and others that you’ve grown up with. I literally cannot recommend this game enough. It is the perfect family game with anyone over the age of eight grasping the game and anyone over the age of eleven being truly competitive.

I have had many fun evenings playing with just one other person, but the element of running out of routes is lessened considerably. For me the sweet spot is three to five players. There are better two-player games out there, including other versions of this game specifically designed for lower player counts, such as the Nordic edition.

I’m so pleased that this is the first game I have reviewed for this website as it sets a high bench mark for all other games to be measured against. If Ticket To Ride isn’t in your board game cupboard, go buy it, you’ll be chuffed if you do!

Ticket To Ride is a classic game and there is a reason why it has won so many awards. Its accessibility for those not accustomed to the modern era of board gaming means everyone will enjoy it. Those in the board game community call games like these ‘Entry Level’. Ticket To Ride epitomises this term and is one of the best entry level games. It hooked me in, and now with a board game cupboard bursting with over 100 games, I still love playing Ticket To Ride. There is also enough strategy for avid board game players too amking it a great example of a ‘Crossover’ game. Having played it so many times and with quality components it is certainly great value for money.

If you already own Ticket To Ride and enjoy it, or are looking for other inspiration you might also like these similar games: 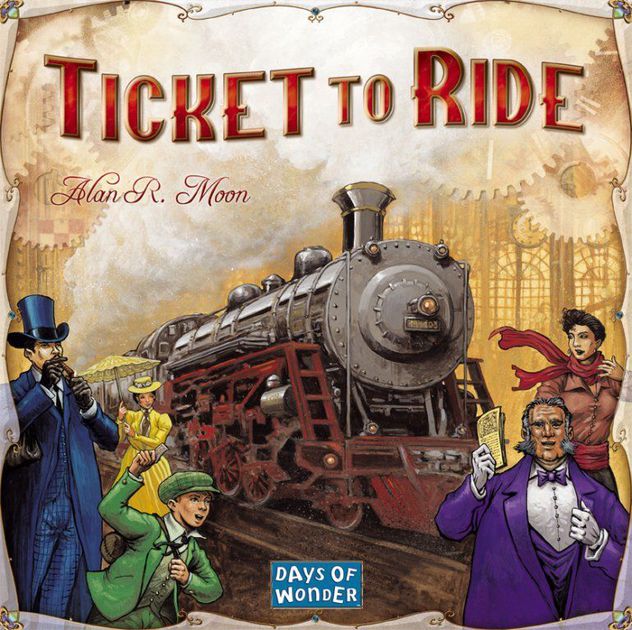 Buy Ticket to Ride
from Amazon