Konnichiwa! My family have been channelling our inner giant beasts and destroying Tokyo with some rampage dice-rolling for some time now. Every time we do, Japan seems to rebuild its de facto capital city. We then trample all over it again, and each other, to decide who will be the King of Tokyo.

This family game was designed by Richard Garfield in 2011 and is currently in its second edition published by Iello. Right, enough of the trailers, let’s review this smash hit… 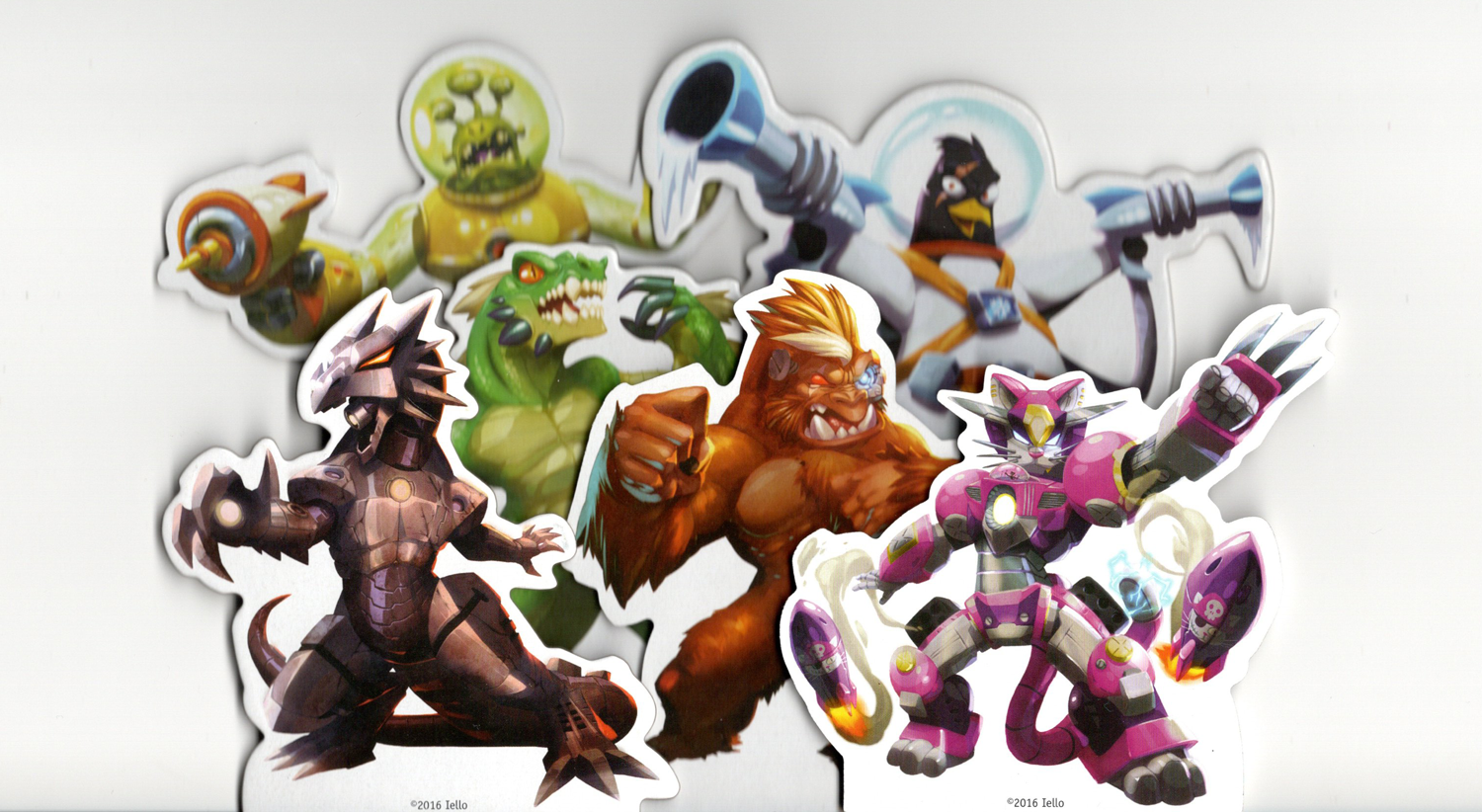 Each player takes one of the characters that look like they have leapt out of the big screen of a Japanese Shōwa era movie. These differ in look but not in abilities. The aim of the game is to survive and get 20 Victory Points, or alternatively destroy your opponents.

On their turn, each player rolls six dice, picking which dice to keep and which to reroll in a Yahtzee style way. The dice allow you to collect a set of three numbers to gain victory points, gain energy cubes, heal your character or smash another player (or players).

A deck of power up cards will supply players a choice of three cards that will enhance your beast or gain you advantages in some way. These can be purchased for energy cubes.

Players will then battle it out, in and around the board, which has two locations on it, the first Tokyo City and the second Tokyo Bay. The latter is only used on games with five or six players. If Tokyo City (or Bay) is ever empty at the start of a player’s turn they have to enter the city gaining them a victory point.

King of Tokyo is officially for 2-6 players but the 2 player option is a little lacking so really that should be 3-6. The box says it is suitable for those age 8+ but with a little help reading and explaining cards, most children 6+ will be able to play. Younger players can still be a part of the game with the dice rolling element.

The game goes around relatively fast and all players are involved removing health points or studying the power up cards. This is a light game, ultimately you are rolling dice, but there feels like there is some strategy. Being able to roll six dice and reroll any you want a further two times, mitigates some of the luck and you feel a bit like you are a master of your own destiny. The power up cards may be snapped up by another player before you, but something better might get overturned. So in comparison to some games, luck does play a bit more heavily with this one, but it is cleverly disguised and you feel like you are in control, especially when deciding to stay in Tokyo or not, or when choosing what dice to keep.

The power up cards vary quite dramatically and it doesn’t always feel like the cost is proportionate across the deck, but that sort of adds to the gamble of it all. Most cards you keep for the duration of the game but some you discard for a one-off bonus. The cards are generally worth nabbing and the balance of collecting energy, repairing hearts, doing damage or trying to gain victory points give you a difficult decision as to what to try and roll for.

There is some player elimination. This tends to be towards the end of a game so combatants will not be sitting on the touch line for long, but you can be unlucky early on which thwarts the enjoyment of that player.

This is a cool looking game without doubt. The player scorers are brilliant. They have two rotating wheels for your health and victory points and are very satisfying components indeed.

The player board will be smaller than you expect. All components, board, cards, tokens, look great. The cards have a cool comic book styling with outlandish powers that will make you smile. The energy cubes are translucent green and are none in our household as snot cubes – I think that is my fault (see our unboxing video to find out why).

Now the dice deserve a particular special mention. They are a little oversized and as a result, satisfyingly chunky. My five year old can barely hold all six in his little hands! I am a bit of a sucker for custom dice and these certainly quench that quirk in me. With their paws, hearts, lightning bolts and numbers, they are simply brilliant. 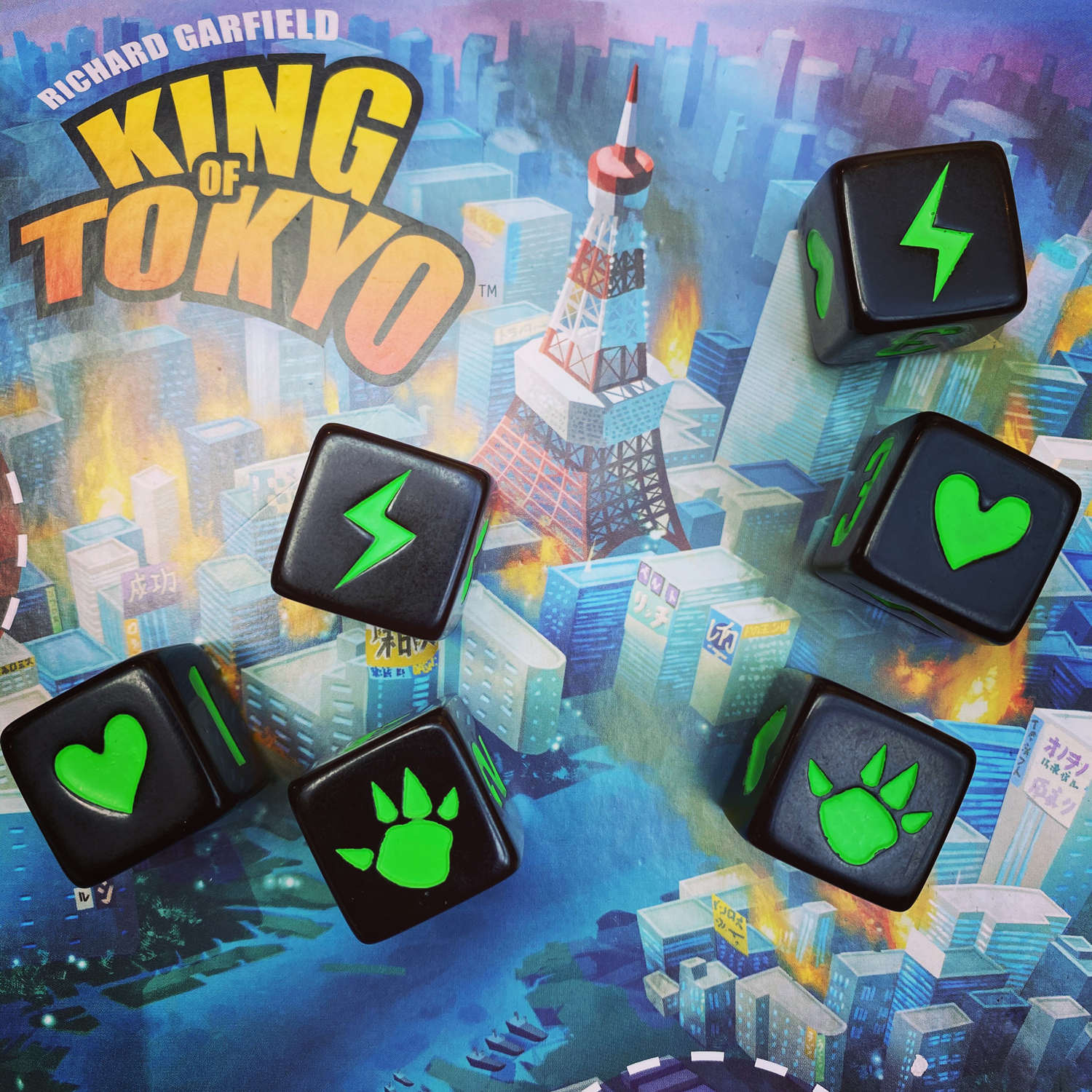 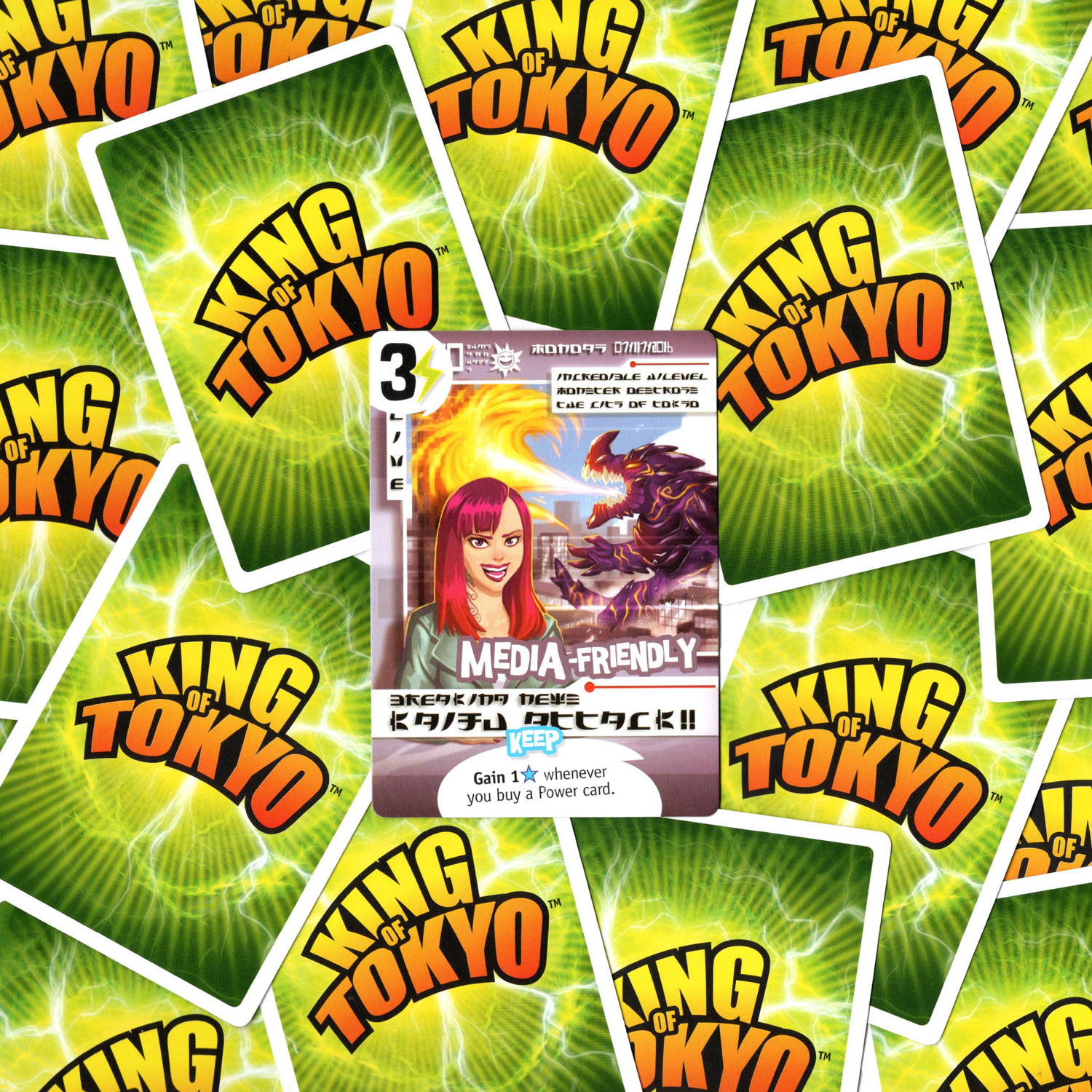 I asked my boys what they thought, as this is a game that children should enjoy and I thought it was worth sharing. Harrison (age 12) said: “I think it’s a good game, I like the characters, I like how they are different – I really like their names and illustrations on the characters and cards. I like the cards that give you special abilities. I think it is good how there is different ways to win by making other players lose their hearts or collecting 20 stars. I enjoy the advantages and disadvantages of being in Tokyo”

George (age 9) didn’t hesitate with his opinion: “It is a good game and I like the way you have to destroy each other as it’s fun”.

Max (age 5) had the following opinion: “I like the different characters, and smashing people, and getting stars for going into Tokyo, it’s good.”

There you go, straight out their mouths and relayed for you! 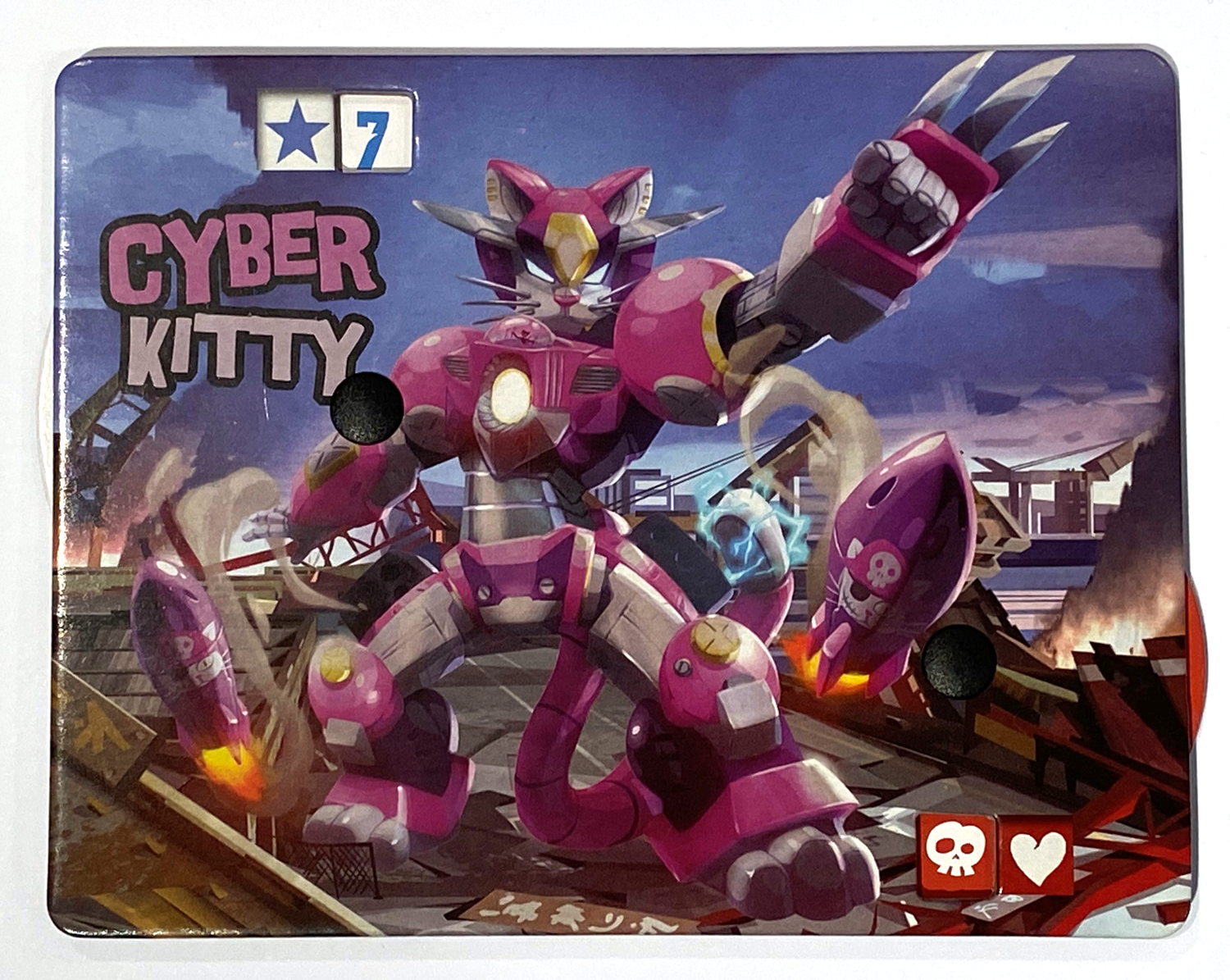 This is a brilliant entry-level family game and well worth considering as a game to play with your children or those new to board games. It looks great, plays smoothly and with the slight element of luck your children do have a chance of winning. It’s short set up time and play time is also a real bonus.

The theme and components really make this game. The artwork should entice most pre-teens/early teens to the table when other games may not appeal. The rules and mechanics are all simple enough for children to actually play without supervision, although clarification on some cards may be necessary and the occasional hissy fit may have to be dealt with!

I’m not particularly a fan of games that have player elimination. There would be no other way to deal with it in this game, so it is a necessary evil. There can also be a little bit of ganging up on a single opponent on occasions that may spoil someone’s enjoyment. Having your monsters have unique abilities only comes with the Power Up expansions – it does feel like it is an omission in the base game with hindsight, but it is available as an add-on.

I think it is fair to say that my whole family really like King of Tokyo. We have even gifted it to other families. It is a very good entry-level family game that keeps us entertained. It will get plenty of play time and for that reason it is well worth having in a collection. On the flip side of the coin it is unlikely to ever be the favourite game in your collection.

King of Tokyo really is a very good, fun family game. It is held in fond regard by many board game enthusiasts as it was many people’s gateway game. It is simple, light and has a really fantastic theme and I can see why people love it. My children really like it, as do I, but I must confess it doesn’t get to the table on game nights when they are in bed very often.

If you already own King of Tokyo and enjoy it, or are looking for other inspiration, you might also like these similar games:

Buy King of Tokyo
2nd Edition
from Out Of Town Games 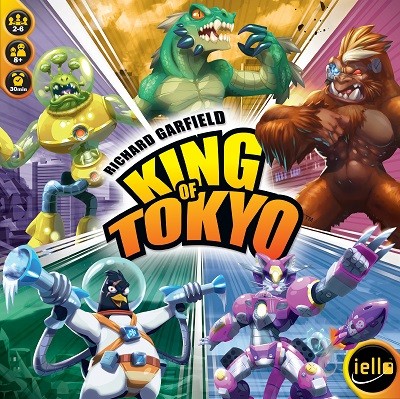