I always feel a pang of nostalgia when one of my kids want to play the card game Top Trumps, the premise is simple, players compare simple statistics to win cards. The trouble is that once you learn what score is high for each category you can soon dictate a game in a way Kim Jong-un would be proud of.

When the brand diversified into ‘Match’ a self-confessed ‘crazy cube game’ I was intrigued enough to make a purchase. As it was around £15 it wasn’t a significant gamble or investment.

What I now own is the illegitimate lovechild of Connect 4 and Tic Tac Toe with no inherited genes from Top Trumps! If you are hoping for a game like the card game this is not it. Other than the logo featured on the box this game has no connection to that nostalgic card game whatsoever, but it is still worthy of attention…

The aim of Top Trumps Match is to obtain five identical images in a row. When starting a game the cubes are arranged so that no more than two images on one row are identical. Once that is sorted, whoever goes first pushes through their top left cube, this lands on their opponent side for them to study. Once they have decided which of the six different images they want to face them, and where they want to place it, they push it back through another square. This in turn knocks another cube out of the board the other side.

Play goes quite quickly back and forth in this way with the cubes being rearranged until one player gains five identical images in a row. Two minor rules, you can never push it back through whence it came and you can never fill the blank top left corner unless it grants you your five-in-a-row.

Once you have five-in-a-row, you’ve very nearly won, but there is a twist. Before the game started each player draws two blind cards. If at the end of the game one of the loser’s cards match the winner’s five-in-a-row character they snatch victory from the clutches of defeat in a rather fun (and if done right, suspenseful) final luck-based revelation. 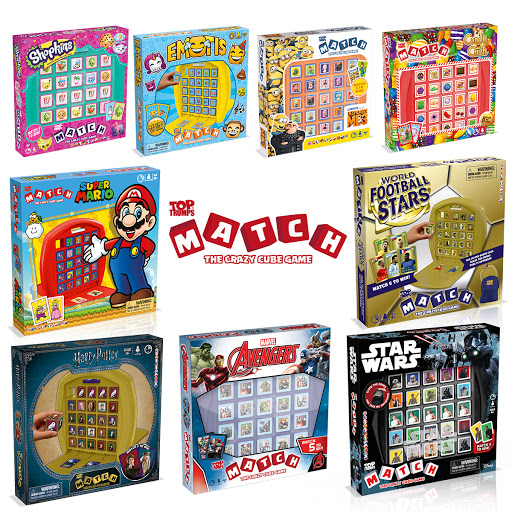 I like playing board games with my children, I have three boys varying in age from 4 to 10, and finding a game that has us equally matched is very difficult. After all, it will do them no favours in life if I let them win! Orchard Toys have delivered a number of games such as Rocket Game and Shopping List, but these largely rely on luck to create a level playing field and are aimed at younger children.

Top Trumps Match does deliver a game where anyone can win. Yes, there is an element of luck, but it succeeds through the lack of complex strategy. Five-in-a-row is a simple premise and there is very little way of predicting how your opponent is doing. You will both probably be trying to complete multiple rows at the same time, the best and only real option in the game. You also don’t know whether the images on the cube you are pushing through will help or hinder your opponent leaving you blissfully blind. The game therefore just works as a result.

The boxes say it is aged 4 plus (with the exception of the Star Wars version for some inexplicable reason which says 6 plus) and it depends on your child, but I think 6 plus would be more accurate. My 4 year old can play it, but to succeed needs a bit of help, my elder two boys grasp it and are just as likely to win as me, and not just with the card kicker at the end. It really is simple to grasp and much easier than Connect 4. I do really like the twist at the end, somehow a victory by card kicker is so much sweeter than an honest cube victory, not sure why, perhaps it’s just me!

UPDATE: Some new versions of Top Trump Match have slightly different rules for more advance play. The setup is slightly different and the two card kickers at the end instead serves as the cards you must get your five in a row with. 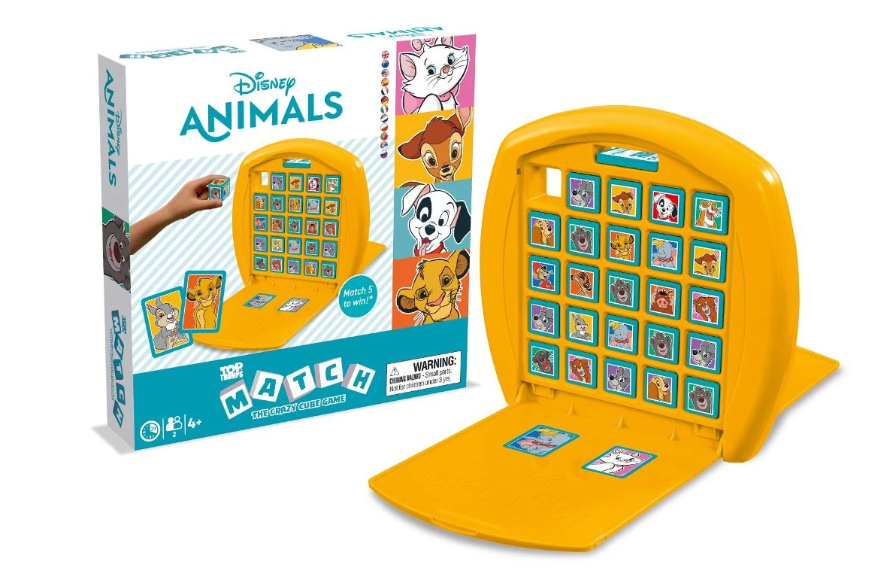 Top Trump Match is aimed at children and as such it ties in with many of the kid’s favourites, such as Marvel Avengers, Disney Princesses, Harry Potter, Star Wars and more. Be aware though, regardless of which version you choose they are all exactly the same game just with different branding to the cubes, cards and outer box. Therefore you only really need one.

The game would be good if they were just random symbols on the cubes, but let’s be honest your children are going to love it a lot more if you theme it with their favourite characters. The upright board hinders cheating and it is all of a good quality tough enough to withstand the younger players. The cubes are particularly nice quality.

In terms of storage, it folds away into a self-contained box which is easily transportable. If I was to gripe, the cards are a little flimsy and I discovered the storage slot for them at the top of the board a little late and so they got a little bumped sliding around in the case. I’ve played this a lot with my boys and they show signs of wear but not to an unplayable standard. It really is a very minor gripe! 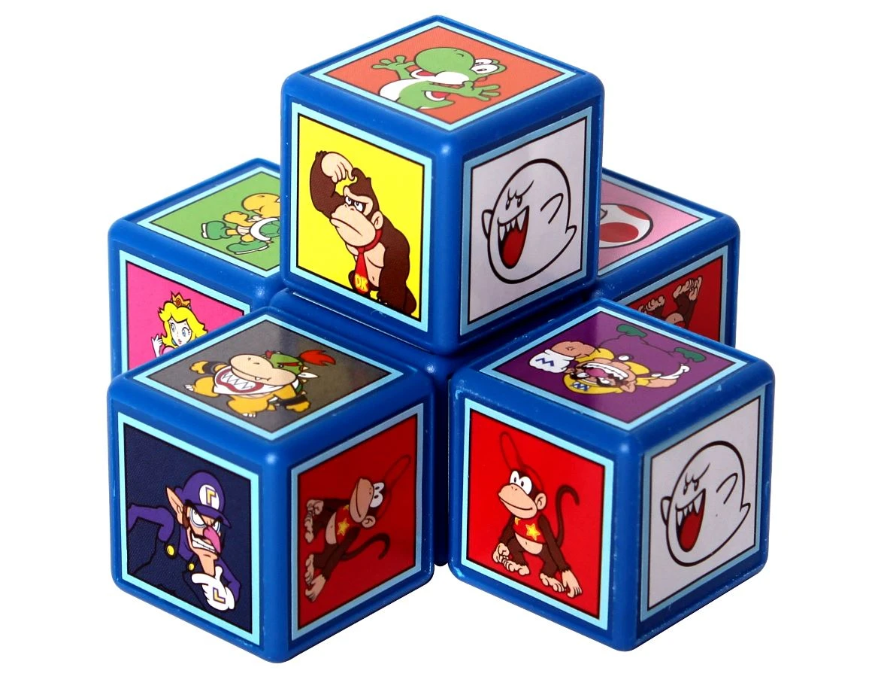 I’m not the target audience, so with this in mind I asked my boys what they thought…

My over-competitive ten year old said that he particularly liked “that you can lose but still have a chance of winning”.

My eight year old contemplated the answer a little longer before starting his ramble, the gist of which was that he enjoys his favourite characters on the cubes and cards. He also likes that he can win even when playing me or his older brother.

There are lots of children’s games on the market but the challenge is making a game simple enough for younger players to grasp and yet entertaining for adults too. A game intended for kids also has to have the ability to just leave the kids to it without adult supervision. Top Trumps Match does this and for that it has to be recommended.

It is a good children’s two player game and there aren’t that many of them really so this game, in one of its many variant pasted-on skins is well worth adding to the collection.

Balancing a game to be fun for young and old alike is a difficult task. Top Trump Match does just that by being good fun, albeit lightweight. It is simple to learn, simple to teach and strangely addictive. Children’s attention does not wander with the quick play time and it usually ends with one side saying “can we play again?”, what’s more – you won’t actually mind!

If you already own Top Trumps Match and enjoy it, or are looking for other inspiration, you might also like these similar games:

Buy Top Trumps Match
from Out Of Town Games