“Drown thyself? Drown cats and blind puppies” said Othello in Shakespeare’s tragedy of the same name, but this game has nothing to do with the Great Bard (apart from maybe a hint of inspiration). Nor has it anything to do with the drowning of pets, so let’s move swiftly on.

In one form or another, Othello has been around since the late 19th century and as such, no-one really knows its origins. What is definitive, is that in 1971 the game Othello was patented in Japan by Goro Hasegawa. It is his rules and game that are universally used today.

So, can a game that was first mentioned in an 1886 edition of ‘The Saturday Review’ hold up to the modern gamer well over a century later? Read on to find out!

You may have already encountered the two-player game Othello, or its very similar variant Reversi, at some stage. Reversi was one of the first games bundled with Microsoft Windows and Othello was one of Nintendo’s first Arcade games, so perhaps that is how you stumbled across it. If you haven’t the game is very easy to learn…

There is a pool of 64 identical discs that are black on one side and white on the other. The 8 x 8 board starts with two black and two white discs placed in a diagonal pattern in the middle of the board.

Play begins, and continues, by placing a disc of your assigned colour face up and flanking the opposing colour with a disc already in play. All discs trapped between yours, horizontally, vertically and diagonally get flipped over and become your colour.

If you cannot place a legitimate disc you miss a go. The winner is the player that wipes out the opponents colour, or more likely, the player with the most discs in their colour once the board is full. 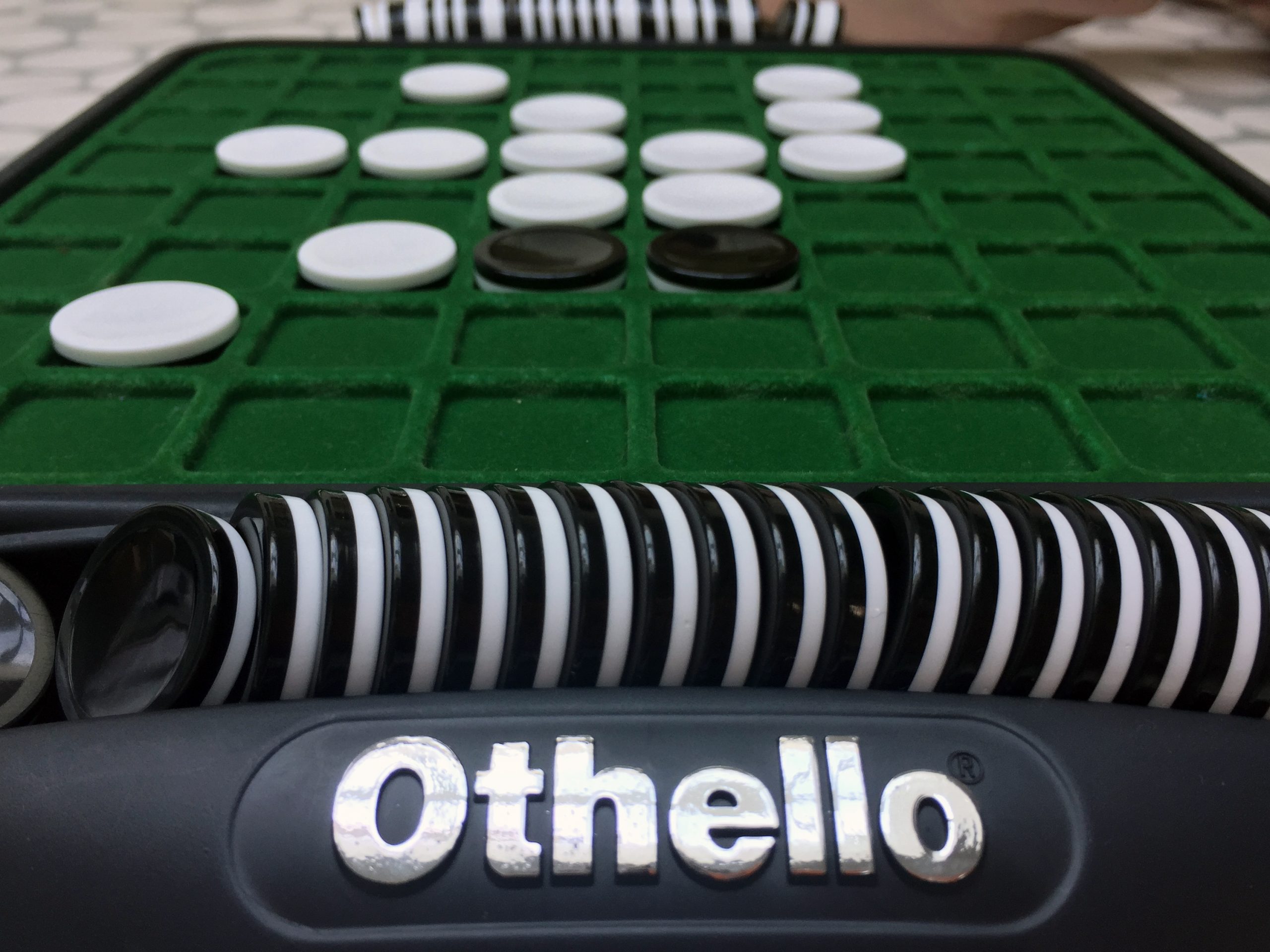 I was introduced to Othello quite young and I loved it. Having played it for over two and a half decades I can state confidently that the game’s strapline of ‘A minute to learn… a lifetime to master!’ is surprisingly accurate. You see I can teach someone who has never played the game how to play very quickly indeed, but frankly, it is unlikely they will beat me on their first go. However, I still haven’t mastered it, apparently I only will just before I’m dead and buried! I assume it will go something like: How did Nick die? He finally mastered Othello and he just keeled over. There are worse ways to go I suppose.

The box says it is suitable for seven years plus, and that’s spot on. That hopefully gives you plenty of life to master it! My eldest son particularly loves it, and my middle boy certainly enjoys it too. Although the younger players tend to go for the strategy of how many discs can I turn over in one turn – even if all the discs will be turned straight back over on the next turn. That said, if the abilities are roughly matched it doesn’t really matter. If you are looking for a game with a level playing field regardless of ability there are other games that do this much better.

I hasten to add that despite the age range this isn’t just a game for the younger players. For the slightly more advanced player there is enough strategy behind it to make you consider your moves. Most players soon realise the importance of edges and corners to dictate a game, but further tactics and the general ebb and flow makes the game enjoyable. There can be a bit of down time between goes as each player will consider  the following few moves in a chess-like way.

Like any game that doesn’t rely on luck to win, you can be hugely disadvantaged if you do not have the strategy or moves to give you the better chance of winning. A bit like playing chess, games can be a bit too one-sided. The reason my wife now refuses to play Othello! To quote her: ‘I’m just not very good at it’.

Game time is probably around 20-25 minutes and you will be flipping more discs than you do pancakes on Shrove Tuesday. 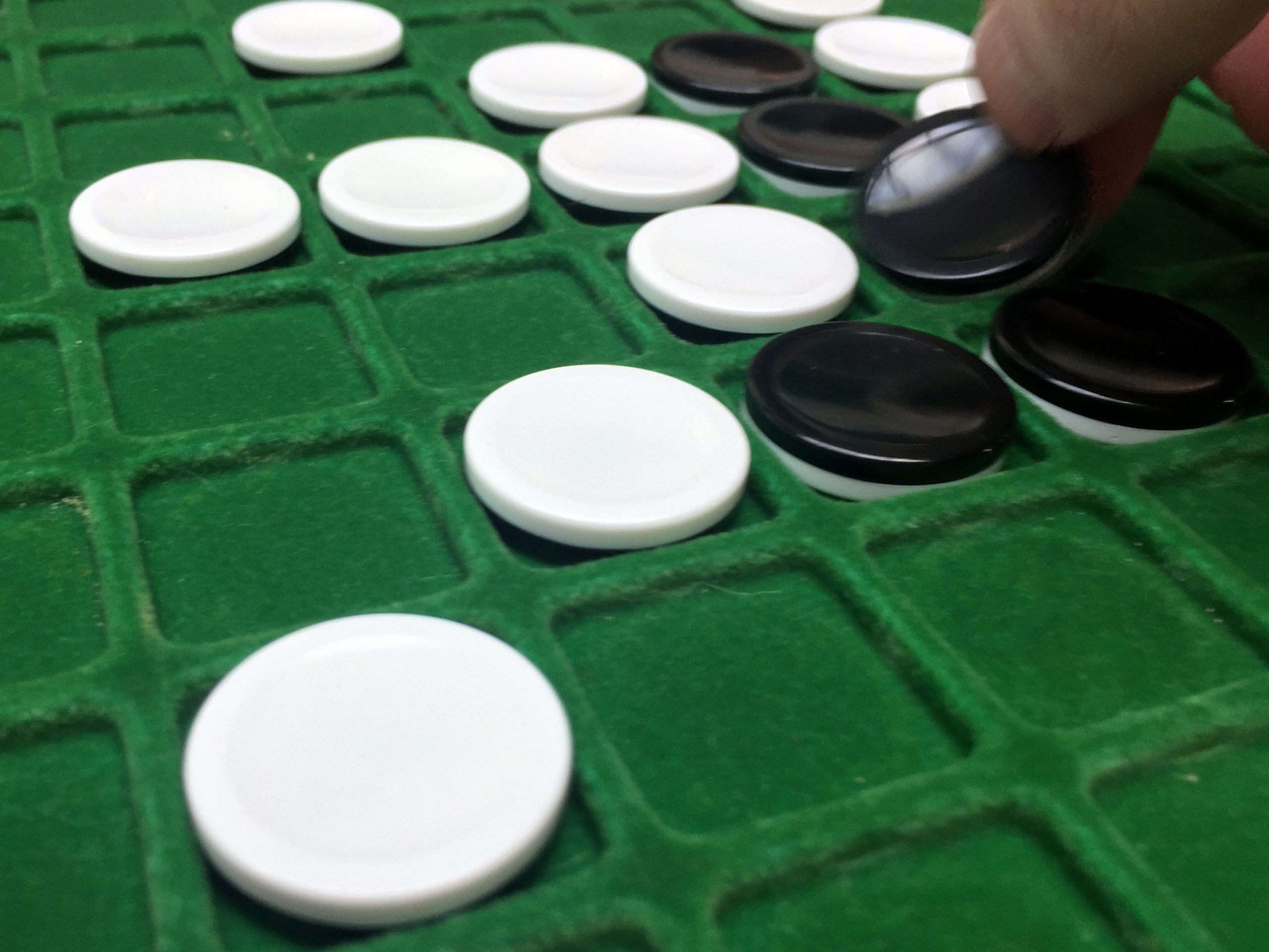 The discs are satisfying as playing pieces, they have this gentle undulation so they just feel nice in the fingers. The board has changed over the years – my modern game doesn’t have the roll-over covers to stop the discs from exiting their containers and jiggling around in the box. However, it offsets this by having a green baize-like playing board with ridges in the grid to stop the discs slip sliding around whilst flipping them over, a definite improvement on the flat boards of times gone by.

I also noticed that a new ‘no lose’ piece board is also available with rotating squares. A great alternative to children shuffling the discs randomly throughout your home!

Can Othello keep pace in the 21st century? Well, it is a completely fabricated fact that the hip hop band Blazin’ Squad used Othello as the inspiration for their song ‘Flip Reverse’, if it’s cool enough for them in the noughties it’s certainly a game to be considered!

Seriously though, in the 1970s Othello had to compete with the usual suspects: Monopoly, Cluedo, Scrabble, Guess Who, Battleships and Game of Life. As well as some weird games that were probably rubbish but I have fond memories of, such as Haunted House (with the glow-in-the-dark skull) and Go For Broke! By the 1980s Eurogames were just starting to gain momentum although most of the UK (including myself) were ignorant and still arguing over Monopoly or Pictionary every Christmas. Today, we are spoiled with a wealth of variety and a catalogue of games to keep us drooling over the next great release. It is therefore easy to overlook older games, such as Othello, that are still very good.

Earning the status of a ‘Classic’ game just because you have been around a long time is not the best accolade. For me, Othello earns its status by being not just a Classic game but an excellent one. In short, this simple but effective two player board game holds up to modern day scrutiny and I can see why it has enjoyed such longevity and success.

Earning the status of a Classic game just because you have been around a long time is not the best accolade. For me, Othello earns its status by being not just a Classic game but an excellent one. In short, this simple but effective board game holds up to modern day scrutiny and I can see why it has enjoyed such longevity and success.

If you already own Othello and enjoy it, or are looking for other inspiration, you might also like these similar games: 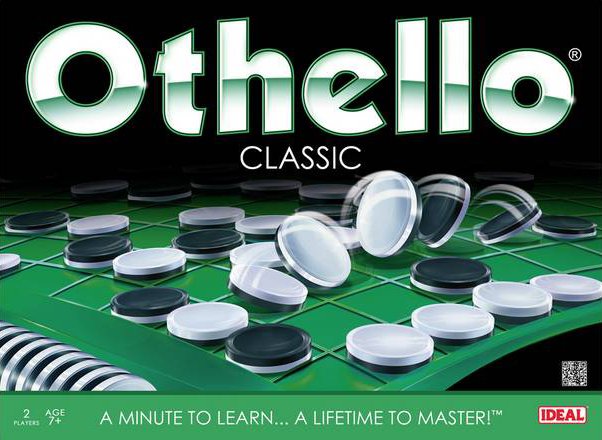