The Crew: The Quest For Planet Nine Review

Advert: this game was gifted by Kosmos Games, this has not affected our opinion.

Calling all wannabe Major Toms, this is ground control with a review of The Crew: The Quest for Planet Nine. I may be a bit late to the party for this game which came out in 2019 to a flurry of rave reviews and awards. Not just any awards either, The Crew has won the Kennerspiel des Jahres, Golden Geek Best Cooperative Game, the Meeples Choice and more. Yet, it hasn’t come under the scrutiny of us. Until now.

The delay in reviewing it is all my own fault. I am embarrassed how long it has taken to play and formulate an opinion on this one. In my defence, I have been thwarted by a pandemic and my own optimism. My journey started off playing with two people. Restrictions were lifted and I decided to get the full multi-player experience so started again. Further restrictions meant I went back to two and then upped the player count to three with my eldest son. To that end I have not managed to playtest this with all player counts so this is based on two and three players only. It’s been a rocky journey, as I imagine a real journey to Planet Nine would be. Regardless of all that, we are here now with the Board Game Review review. 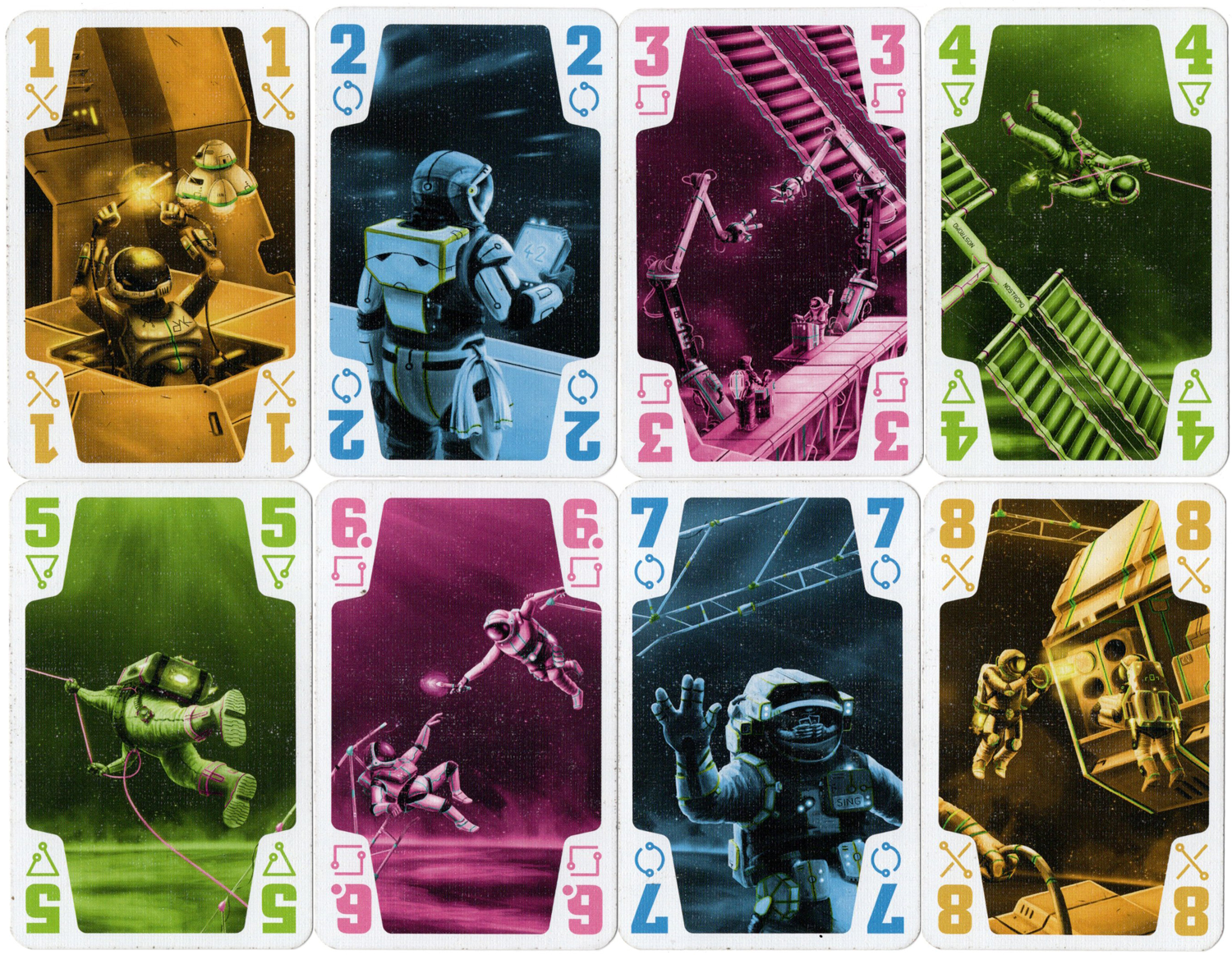 The Crew is a two to five player trick-taking card game aimed at ages ten and over. Those unfamiliar with taking tricks should know that in its simplest form, a trick taking game is where everyone plays one card from their hand, the cards are then evaluated to determine a winner. In The Crew, cards are suited in colour, with a trump card being rockets. During the game you will be working together to ensure certain players win certain cards. Sounds easy doesn’t it!

While the basic premise of The Crew is simple, the game has to be played silently. The only communication comes from token placements once per player, per round. Each round is scored on how many attempts were necessary to complete the task. All levels are accompanied by a paragraph of text in the so-called logbook. This charts your journey to Planet Nine and provides a narrative for the game. Players are required to keep their scores in the logbook and there is space for five teams, so you could play it with different people or replay it should you wish.

Quite often in the crew, players are required to win specific cards. These are assigned at random from a mini deck of cards. The logbook will then see you try to win these cards in a specific order or way. In some rounds one player will have to not win a single trick too. The logbook mixes it up nicely and ramps up the challenge to level fifty. 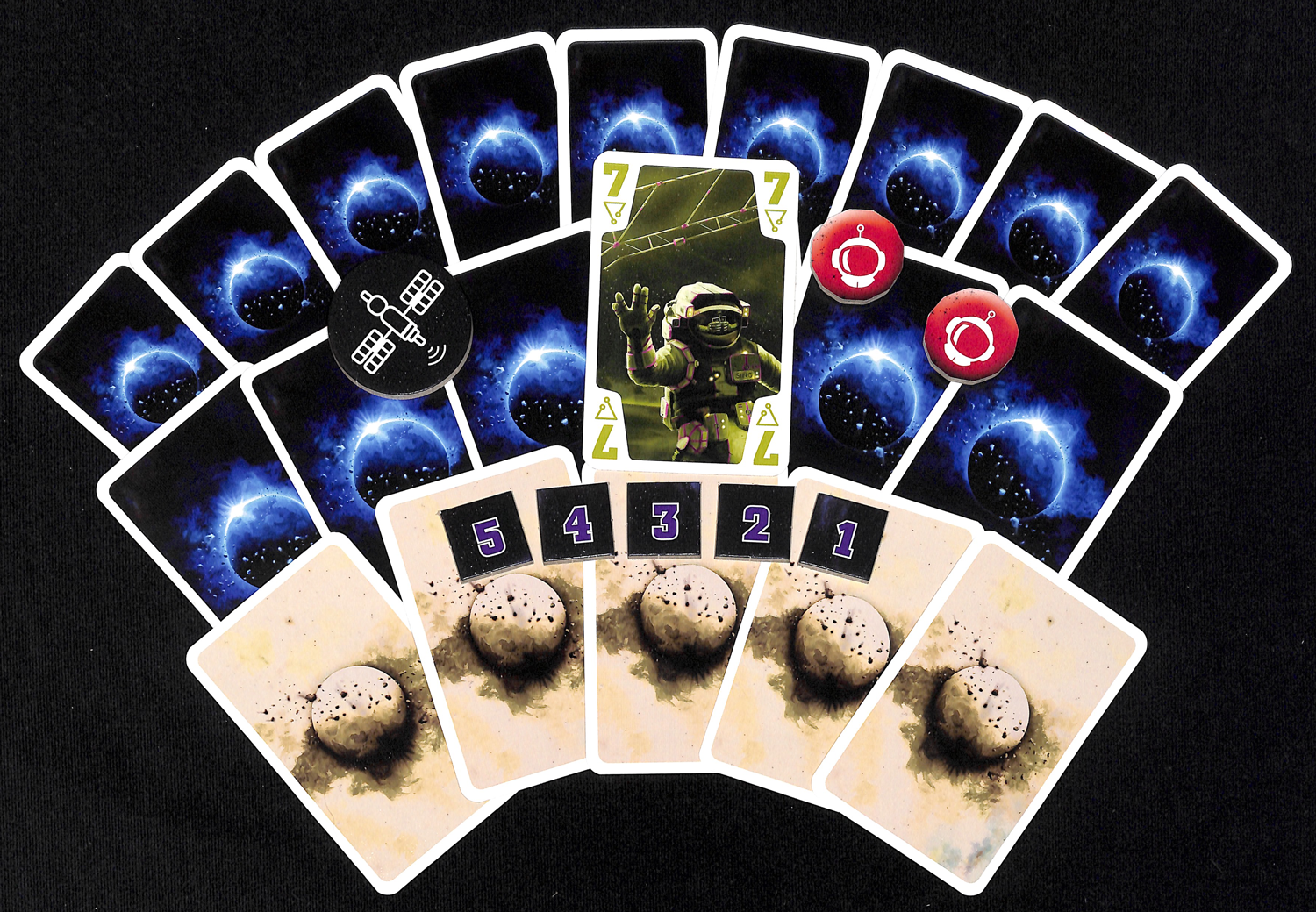 Trying to solve the puzzle of how to win a card, without chatting and working it through with your fellow players is taxing. My wife would quite often say, “Well we won that one but I have no idea how” with genuine befuddlement.

You can be thwarted by the randomness of the cards. Although the logbook tries to entice you on a more challenging journey, with the wrong cards winning an early level can often be more frustrating than a later one.

It is an interesting gaming experience, not unlike the challenge of The Mind, but with more depth and strategy. The Crew is a tricky puzzle to solve silently, but a very enjoyable one. Intriguingly the silence adds to the interaction rather than takes it away. It makes it a more intense gaming experience.

While The Crew says it is a three to five player game on the box, there is a two player variant. Here a third hand (excluding rockets) is dealt to JARVIS. This robotic third player is controlled by the captain each round and half their cards are visible at the start. It works rather well. Having played it with two and three, I can say that it’s certainly easier with two, but still very enjoyable. 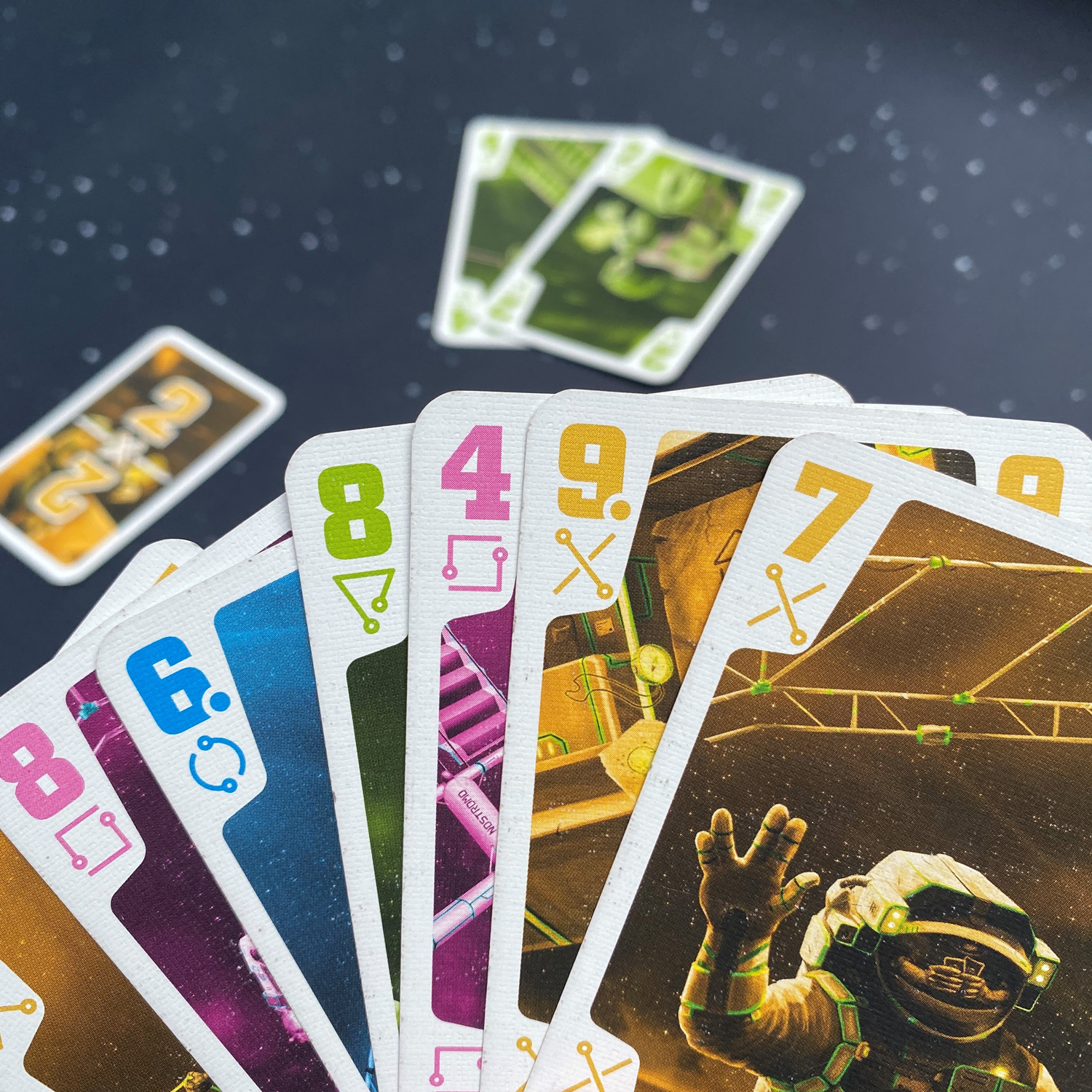 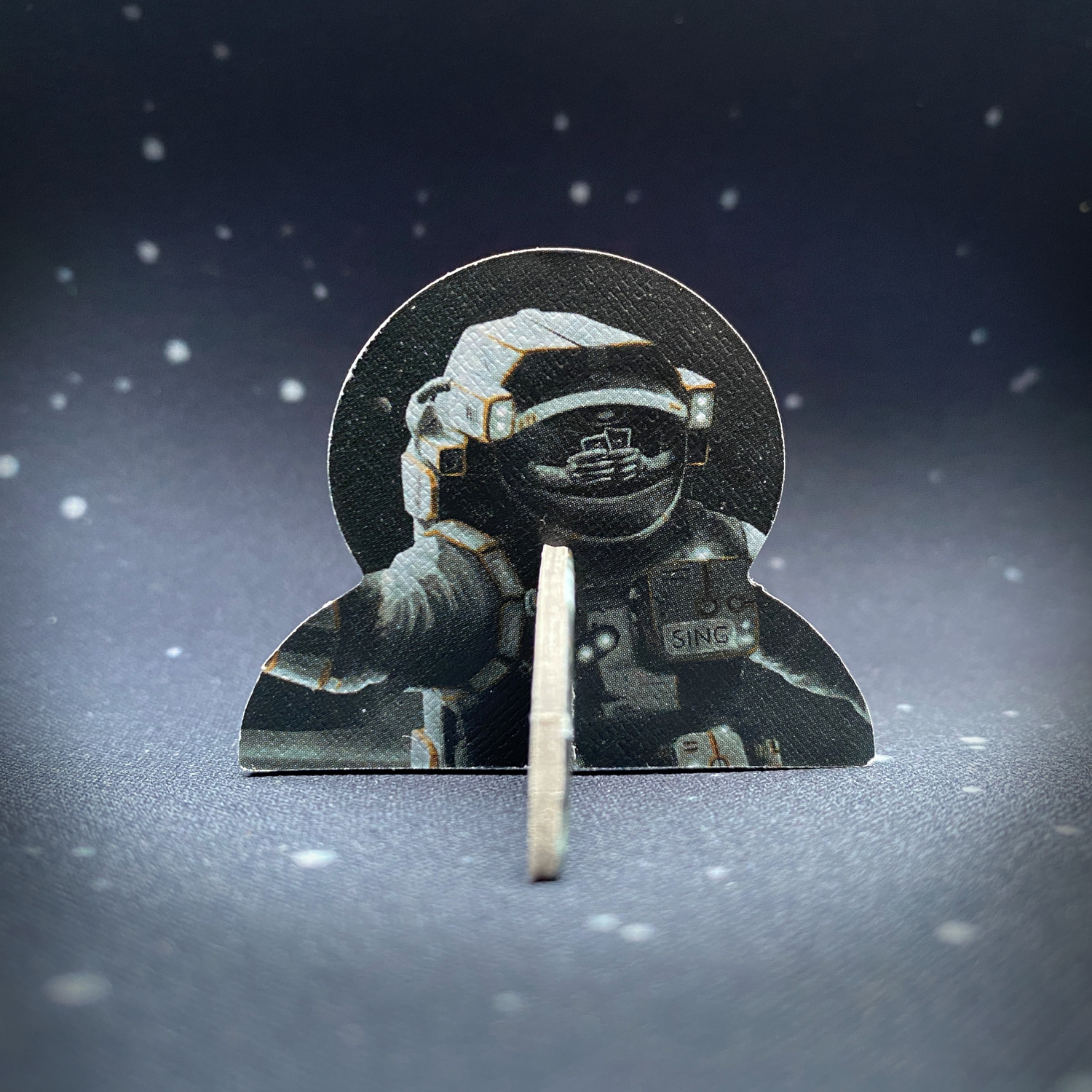 The game is compact. All components are good quality, as you would expect with a Kosmos game. The rulebook is comprehensive and a little daunting, but actually once you get your head around the basics you are better off starting to play and resort to the rules when and if you need clarification of a symbol. If you leave it a week between plays you will need to remind yourself what they all do anyway!

The standee that represents the captain each round is pretty cool. In the space helmet the reflection of cards is a very nice touch! The cards use a nice palette which work well. Like in Lost Cities, the cards of each colour can all join together to create a scene for an entirely superfluous reason. I like subtle details like that a lot so kudos for the attention to detail is due.

Final thoughts on The Crew: The Quest for Planet Nine

Despite my journey with The Crew being a bit stop/start, I have thoroughly enjoyed it. Every time I have played it, I have wistfully thought that it would be an amazing game to take on holiday. I can so easily imagine playing this on a balcony of a hot sunny villa with a glass of wine, filling time with a partner or another couple. The small box and small footprint of it would make it an ideal holiday partner.

Unfortunately, that environment was not the backdrop for my games of The Crew. Sunnier climes and relaxing poolside makes many things better, The Crew is still brilliant without that backdrop! It packs a lot of gameplay into the box and is an exciting puzzle. I was worried that a co-operative trick-taker may be a bit dull or repetitive, but it really isn’t. You are excited with each round that passes. You are also often bewildered by how you managed it! The light scenario that accompanies each round helps set the scene, telling enough of a story to get you invested.

The Crew: The Quest for Planet Nine deserves all the awards and attention that it got. It is a different trick-taking game in a very good way. I will certainly go on a trip to Planet Nine another day.

If you already own The Crew: The Quest for Planet Nine and enjoy it, or are looking for other inspiration, you might also like these similar games:

Buy The Crew: The Quest for Planet Nine

If you want to buy The Crew: The Quest for Planet Nine after reading our review click on one of our affiliate links below (note there has been no affiliate links until this point)

Buy The Crew:
The Quest for Planet Nine
from Out Of Town Games 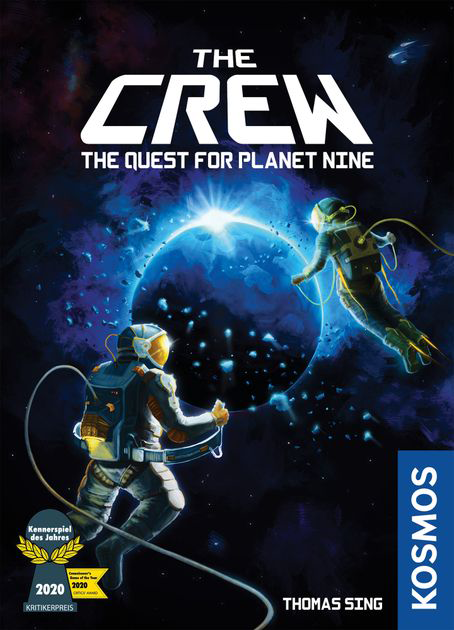 Buy The Crew:
The Quest for Planet Nine
from Amazon

For clarity. We don’t get paid for our reviews. We were kindly gifted this game by Kosmos Games, this has not affected our review in any way.