Explorers of the North Sea Review

Advert: this game was gifted by Garphill Games, this has not affected our opinion.

Everything is good and brown, I’m here again, with a sunshine smile upon my face. My friends are close at hand, and all my inhibitions have disappeared without a trace. I’m glad, oh, that I found, Ooh, somebody who I can rely on. This is the return of the space cowboy. – Okay so it’s an unusual opening to start a review about Vikings discovering new lands. For which I can only offer one simple explanation. The Viking meeples in Explorers of the North Sea remind me of Jamiroquai’s ‘Emergency on Planet Earth’ album cover.

The lyrics however, can translate to playing the game. Sat around my brown wooden table with mates playing board games, often with a glass of wine in hand is my happy place. In Shem Phillips, the designer of Explorers of the North Sea and Raiders of the North Sea, I have someone I can rely on. I have no idea what the space cowboy is, but then I didn’t when I listened to the song back in the 1990s, I assume it is a reference to anyone who plays board games!

Anyhow, I assume you are here to read about the game, rather than my tenuous links to funk and acid jazz music. So here you go… 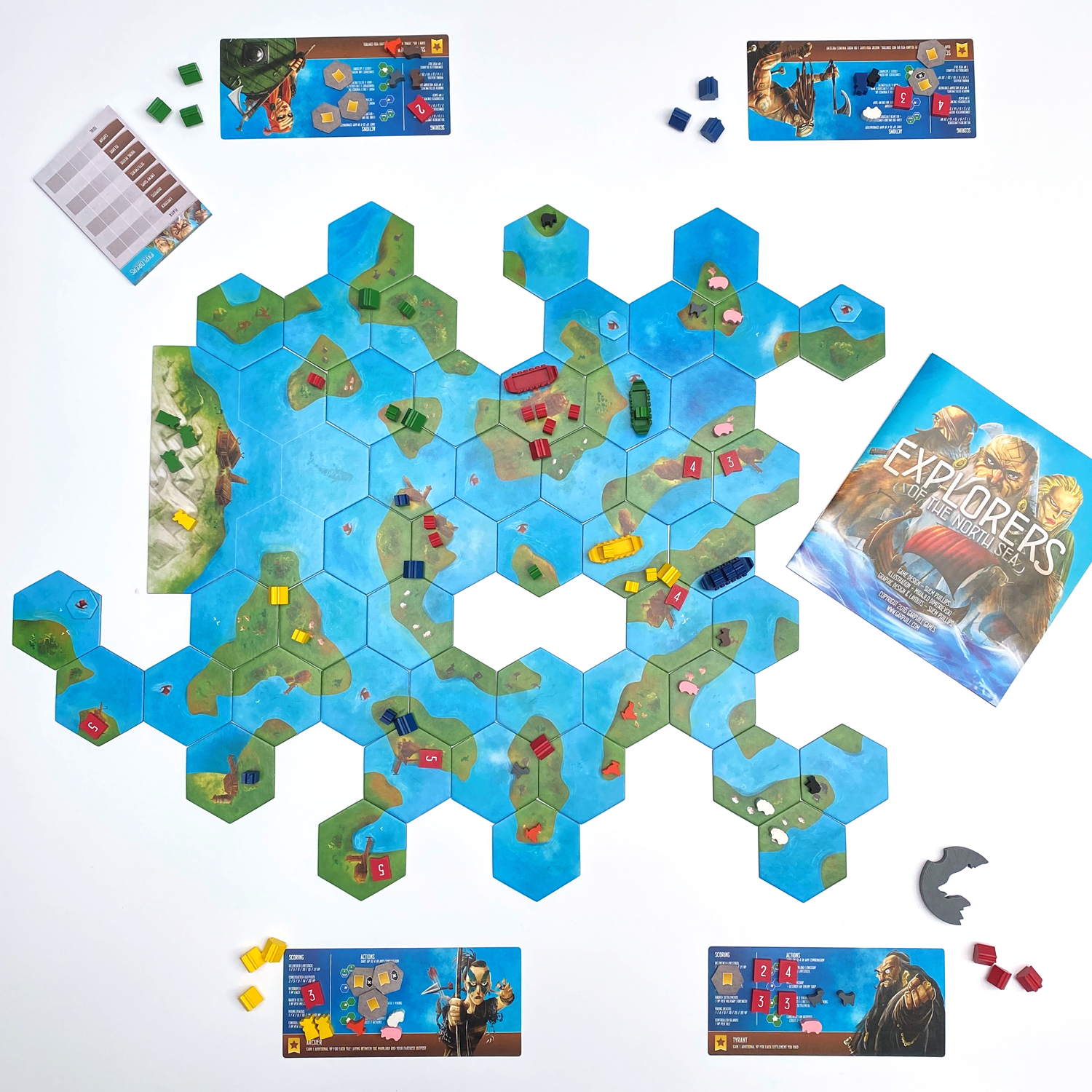 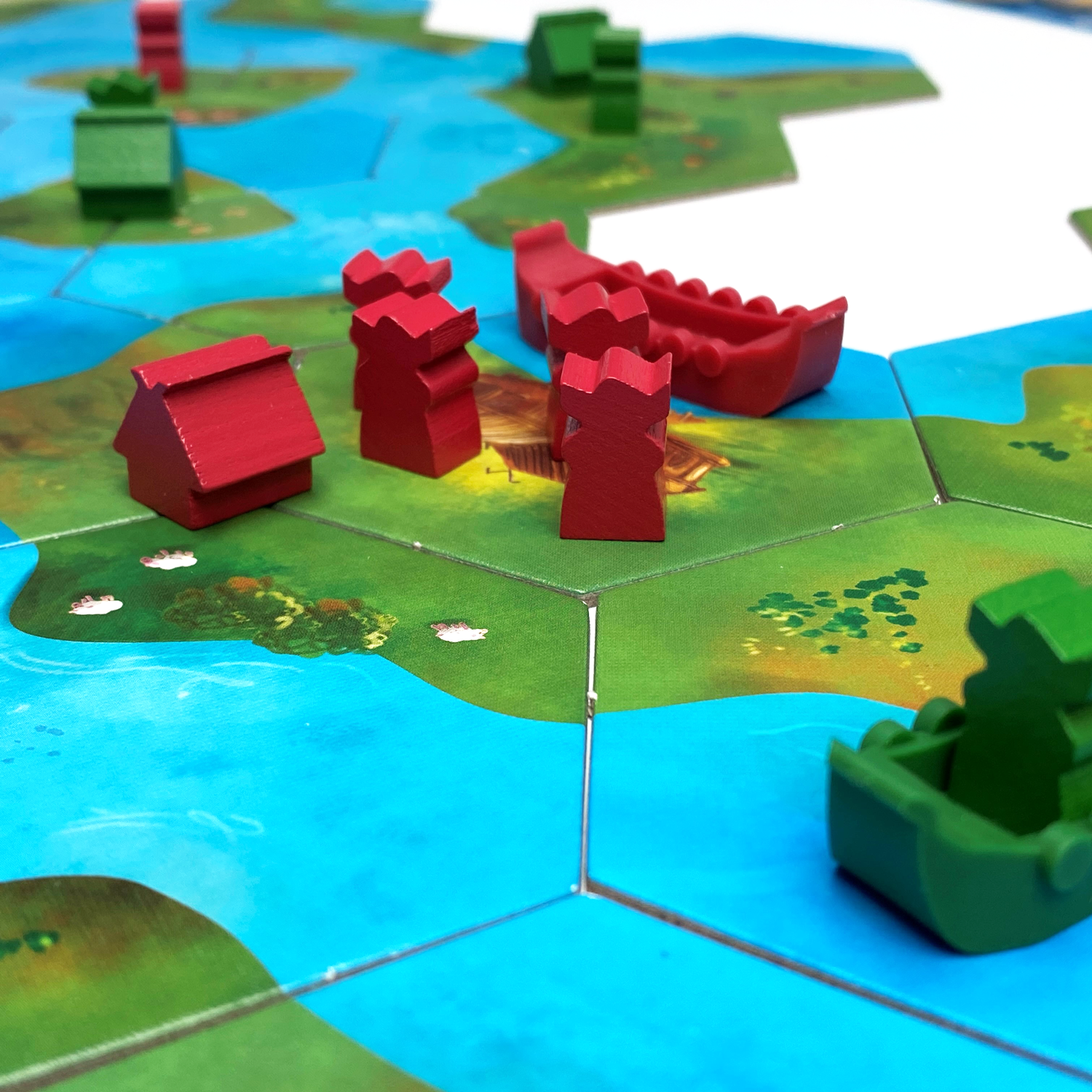 Setting up this two to four player game is a doddle. Distribute two captains to each player, they will choose one to keep and one to discard. These will give unique end game bonuses. Players are also equipped with three hexagonal tiles and outpost houses in their colour. Everyone will have a Viking longboat with two meeples already in it, the remaining meeples will be left on the beach of the starting tile. Pools of animals, enemy ships and raid banners and the remaining hexagonal tiles will be placed nearby.

In its simplest form, Explorers of the North Sea is a pick up and deliver set collection game. On your turn, you will place a tile, take four actions and pick up another tile. Actions comprise, moving your boat one tile, moving two meeples across land, unloading your boat, loading a boat, or using two actions to build an outpost on an island.

The aim is to gather resources in the form of animals, attack enemy ships (and possibly sending some of your crew to Valhalla), raid settlements or dominate an island. These, along with your unique captain bonus, will gain you points. When all tiles have been placed, the game ends. Whichever player has the most points after the end game scoring, is the winner. 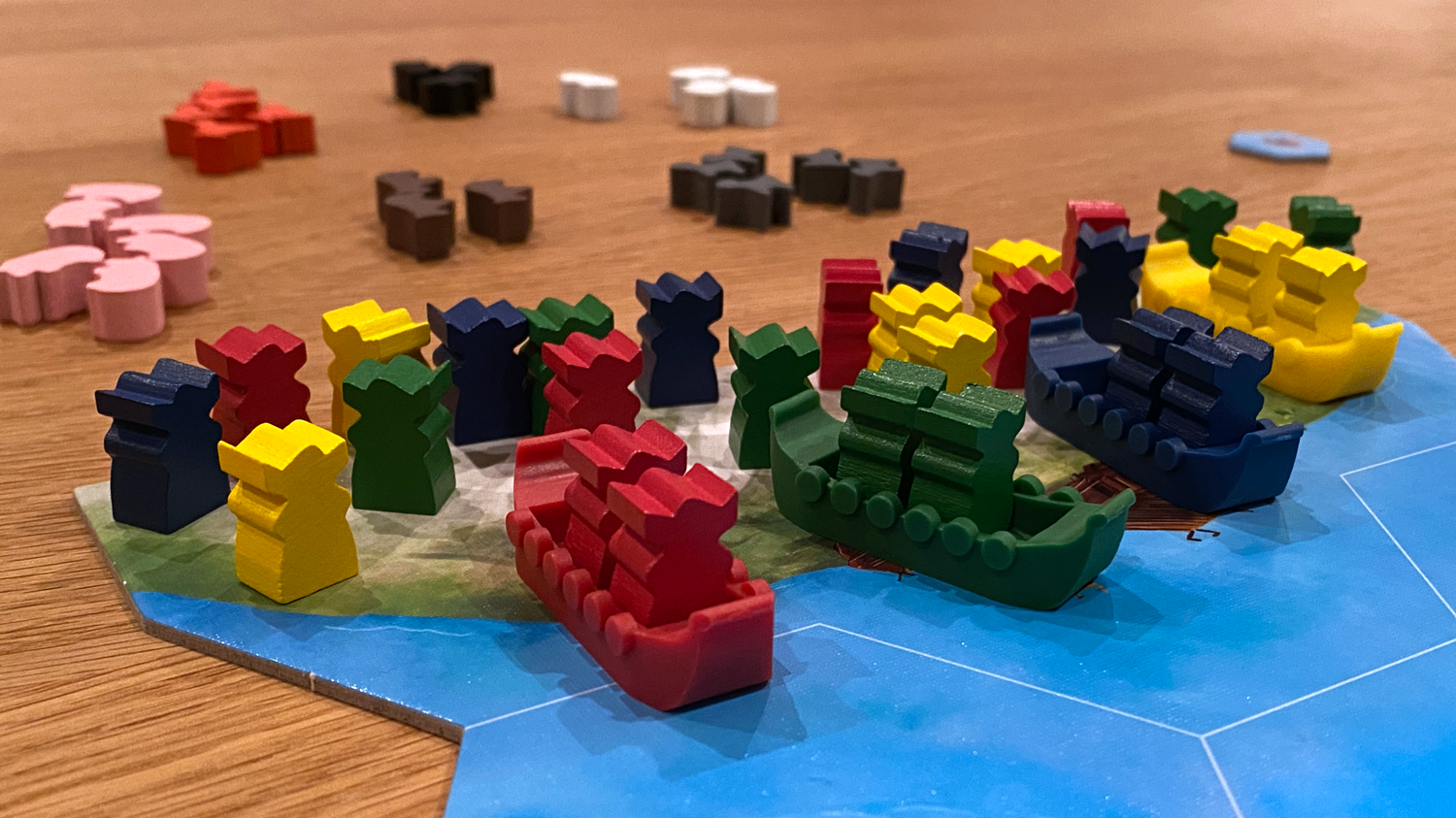 The simplicity of your turn in Explorers of the North Sea makes it brilliantly accessible. While it is lighter than some games, there is also plenty to think about and consider. The restriction of three tiles in your hand and only four actions restricts the decision making process. This means you have normally made your decision as to what you are going to do before it gets to your turn. As a result play moves round very swiftly. Therefore, regardless of player count, games tend to last between 45 minutes and an hour.

While there is a little bit of luck in what tiles you have in your hand there is usually an option open to you, even if it involves scuppering another Viking’s plan. To that end, you naturally try and steer away from your opponents if possible, or certainly we seem too. Controlling your own destiny seems to be our preferred style of play. However, you occasionally get up in the Viking grill of another player, especially when competing for islands.

The end of game bonuses are nicely balanced and from experience will generally gain similar points with only vague attention paid to them. Similar to many set collection games, you can never let your opponent get ahead in any one thing. While keeping an eye on what your opponents are up to, the strategy comes from the tile placement and working out the most efficient ways of getting from A to B and possibly to C and back again. While wondering when you should leave some people at B to go back to A and then go on to C. What I’m trying to say in a really bad way is this: it isn’t as easy as ABC! So, despite its lighter feel, there is still plenty of decision making and prioritising to be done. 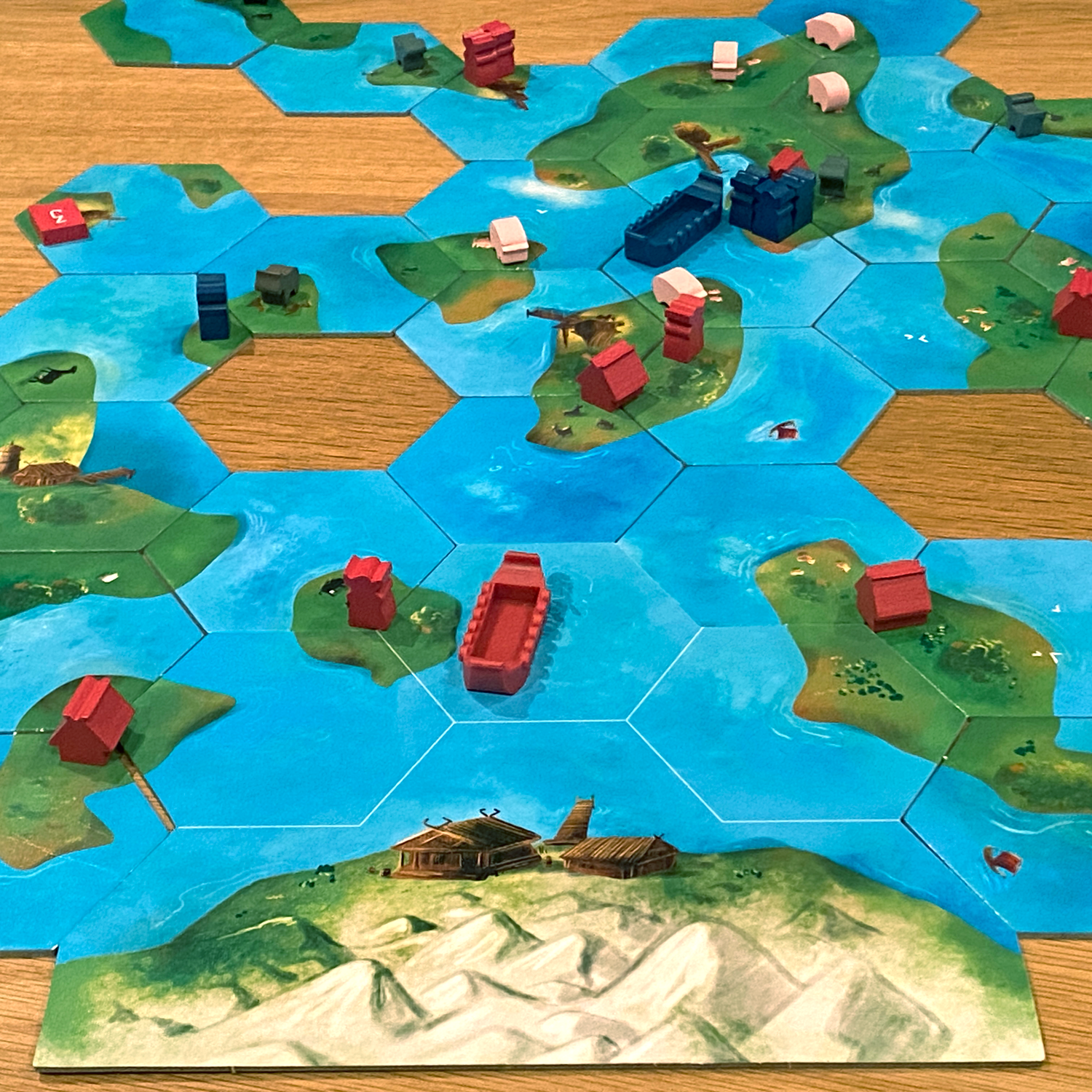 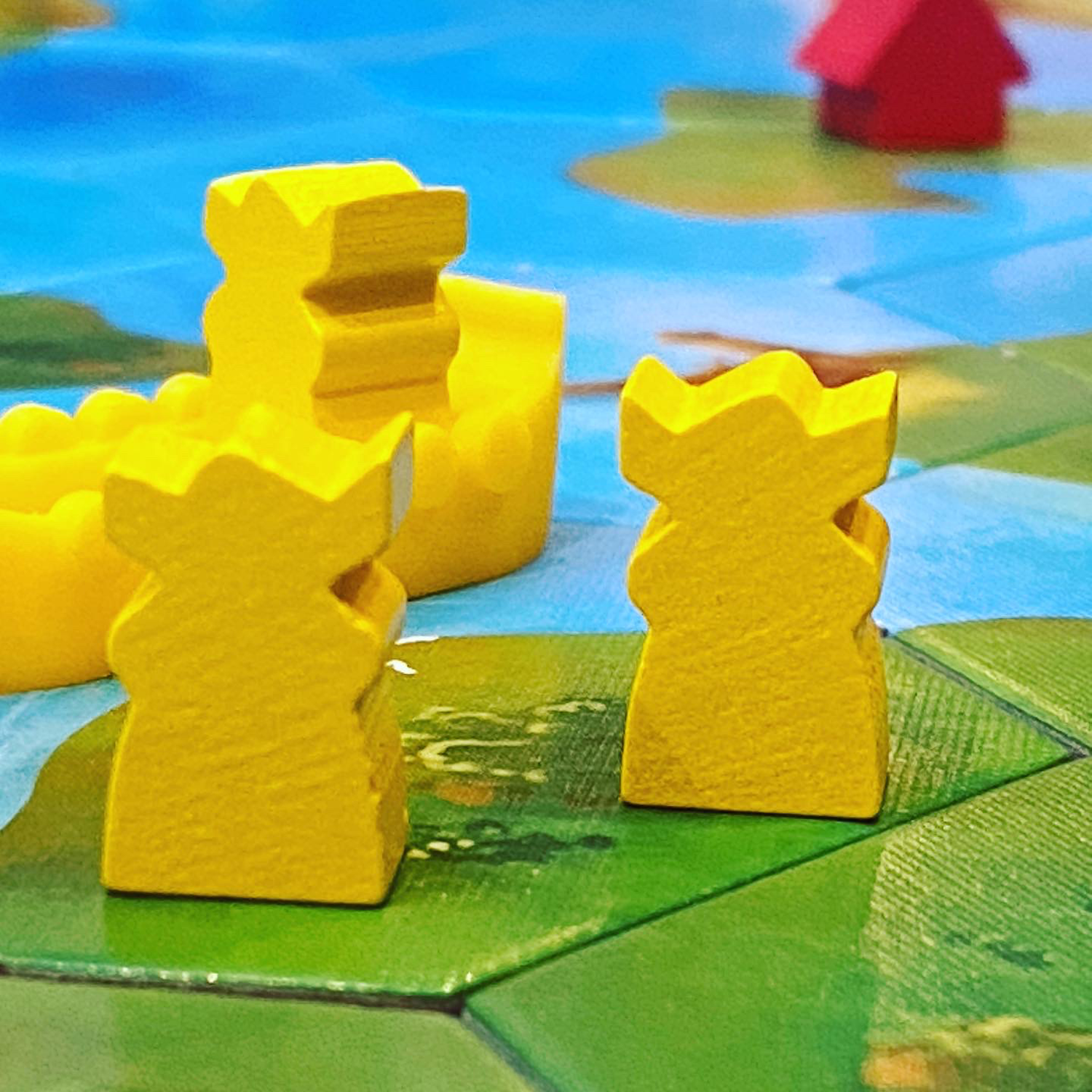 The two starting tiles are double-sided and start the game nicely. All the tiles have simple but attractive artwork. The hexagonal tiles that sprawl out across the table are very pleasing. It always reminds me of how maps get revealed as you explored computer games like Age of Empires or Minecraft. The way the tiles line up and align is very satisfying.

My only complaint is that the animals on the tiles can be a little hard to differentiate. I know my chicken from my sheep, but the goats, horses and cows can be a bit tricky to distinguish. The tokens that represent these animals however, are simple but fantastic.

The Jamiroquais, I mean Viking meeples, are similarly great as they bob around colourfully on their longboats. The card and box artwork of the captains is by The Mico. It therefore tallies with that of its predecessor, Raiders of the North Seas, and you know this is set in the same world. They also look rather awesome together on the Kallax, I call it my shelf of Shem.

Overall, this is a great looking game and I love how it looks at the end with the far reaching map. The rules were good and comprehensive too. 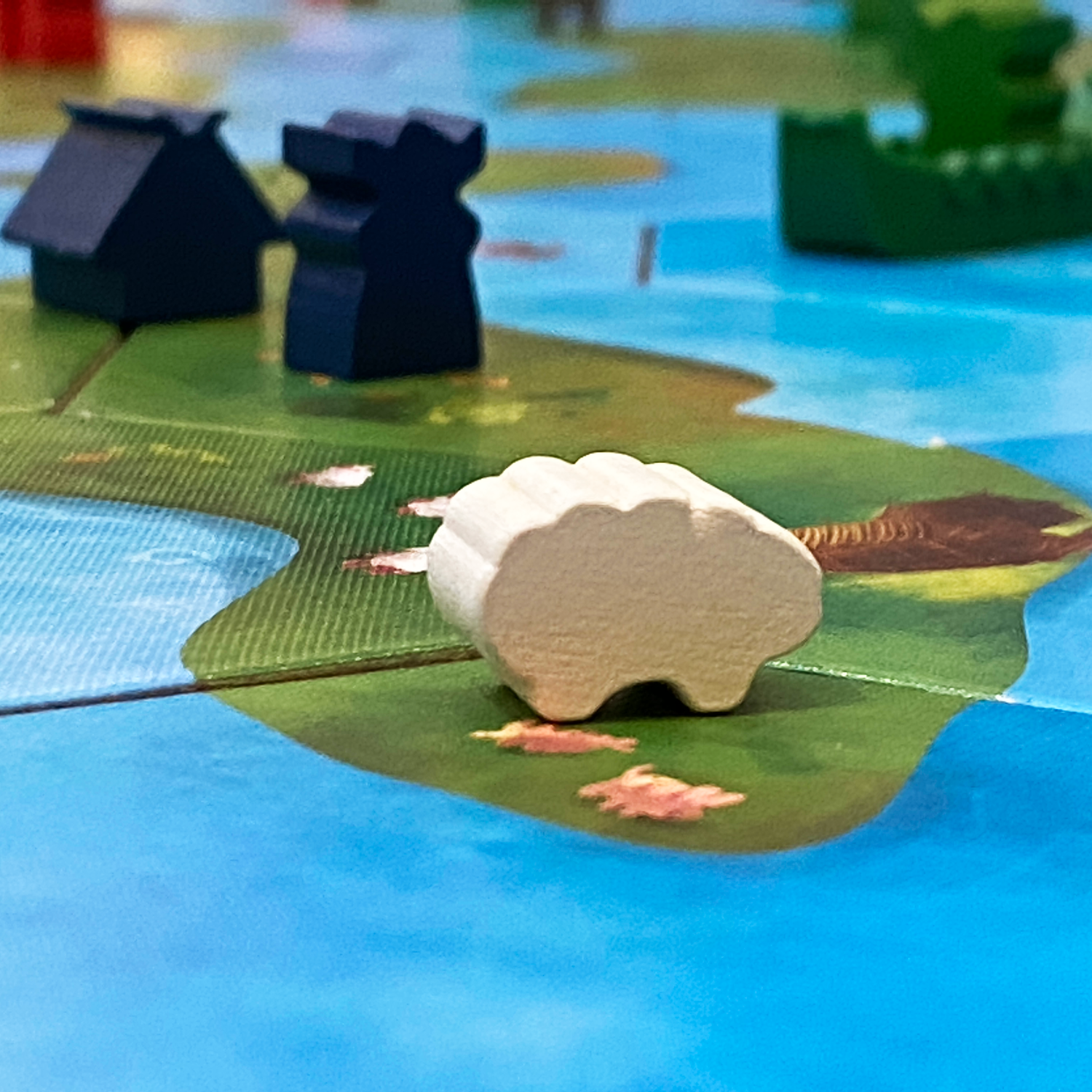 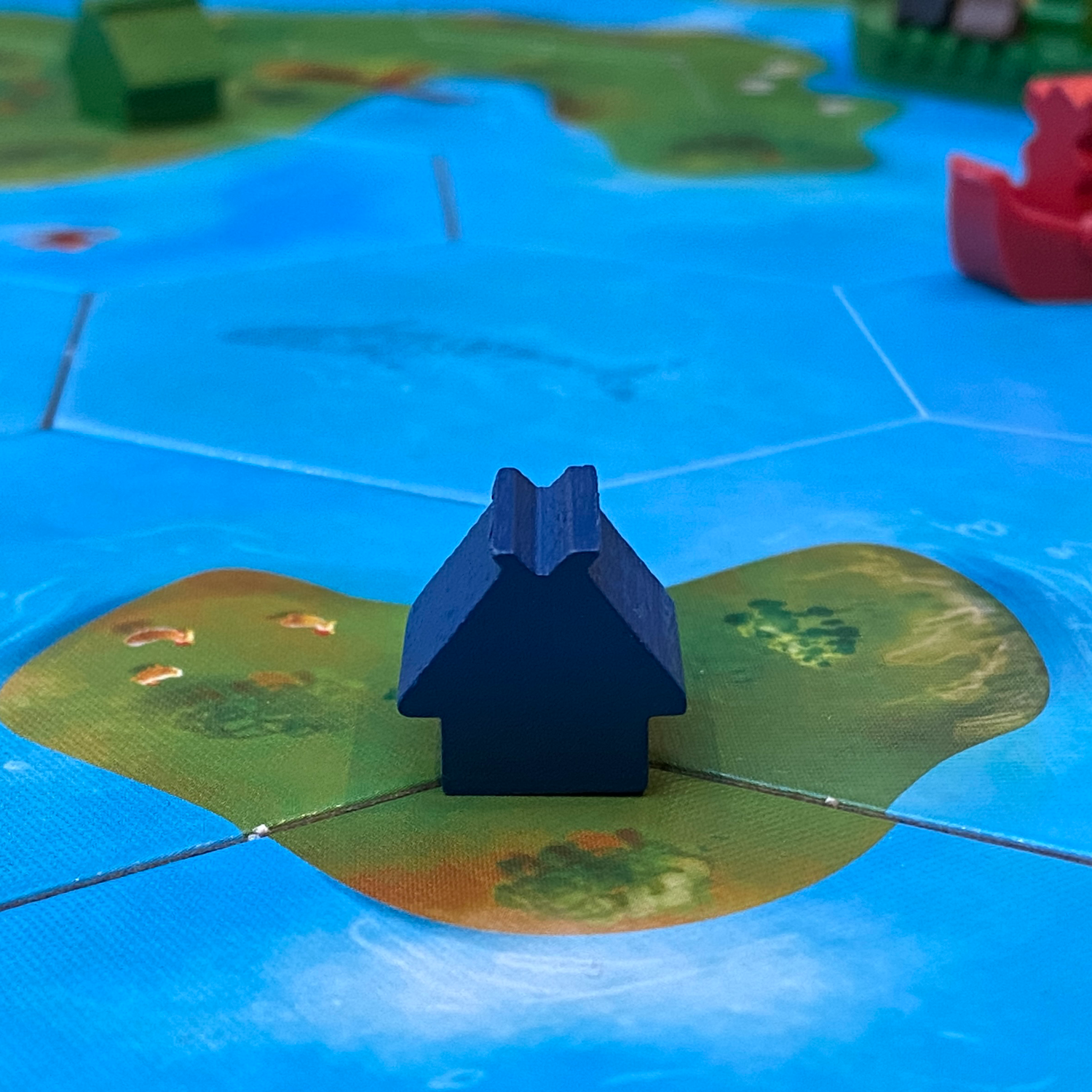 Harrison (12): I like the way it feels very familiar to other games we play, like Carcassonne with the laying of tiles almost like a jigsaw where they have to match on all sides. There are so many things you want to do to get points, but are restricted in a good way and have to weigh up your opponents moves and priorities as well as your own. It’s a great game!

George (9): It was a bit complicated at the start, but I soon got the hang of it. I like it.

Final thoughts on Explorers of the North Sea

Explorers of the North Sea is a brilliant pick up and deliver game. I really enjoy watching the game grow on the tabletop. I equally like the puzzle of it all. The fact that it doesn’t take forever and that it is played at a decent pace, while still offering something to think about is a boon. Having an option for a game after the kids have gone to bed that won’t see me burning the midnight oil is welcome.

Being able to play Explorers of the North Sea with my two older boys is testament to the wonderful simplicity of the gameplay.

I should state that this is a completely different game to its predecessors, Shipwrights of the North Sea and Raiders of the North Sea, the trilogy of games can however be patched together with the Rune Saga expansion. Despite them being completely different games it is almost irresistible to not compare them to one another. However, that doesn’t seem fair as this is a very good game in its own right and you don’t need to own the others to get enjoyment from it. I certainly have enjoyed my time being a space cowboy and an Explorer of the North Sea.

Overall, this is a brilliant game. It utilises the pick-up and deliver mechanism very well. Explorers of the North Sea offers a quick and accessible thinky puzzle which you will have a whale of a time playing.

If you already own Explorers of the North Sea and enjoy it, or are looking for other inspiration, you might also like these similar games:

Buy Explorers of the North Sea 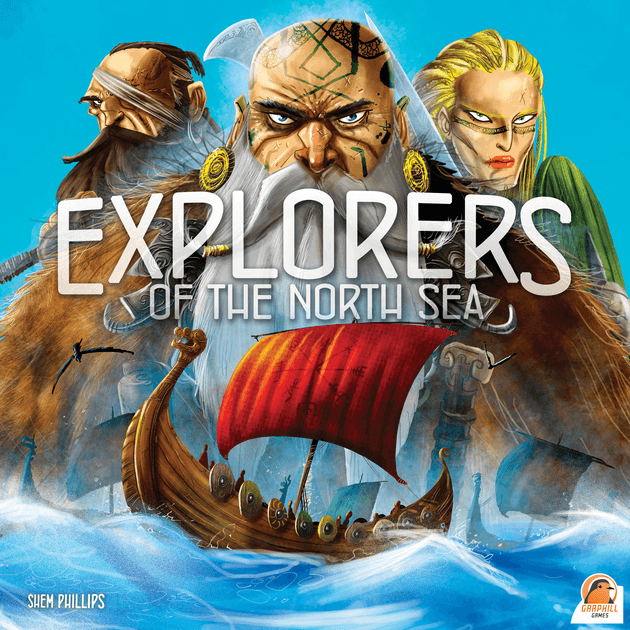 For clarity. We don’t get paid for our reviews. We were gifted this game by Garphill Games, this has not affected our review in any way.

Castles of Burgundy, Game of the Month – January 2021 The Crew: The Quest For Planet Nine Review