Carcassonne is deemed a classic board game by most. Released two decades ago it has sold over 10 million copies. Yet here I am still wanting to write a review of it. I guess most reviews will have been written around that time, before the plethora of games we have on offer today.

For me, classic is a curious word. If you were to buy a classic car for example, you know you will be tinkering under the bonnet and fixing patches of rust more often than you would like to. You’ll be scared to take it on a journey in the rain, in fact you’ll generally be too scared for it to leave the garage in case of a breakdown!

So is Carcassonne comparable to that classic motor? Is it an entry-level game that is easy to be mawkish about? One that you’re scared to take off the shelf in case it just isn’t up to scratch and not as good as you remember? Is it a game that needs expansions to patch up the rust that is beginning to show through? Shall I stop asking rhetorical questions and get on with the review? Yeah I probably should. 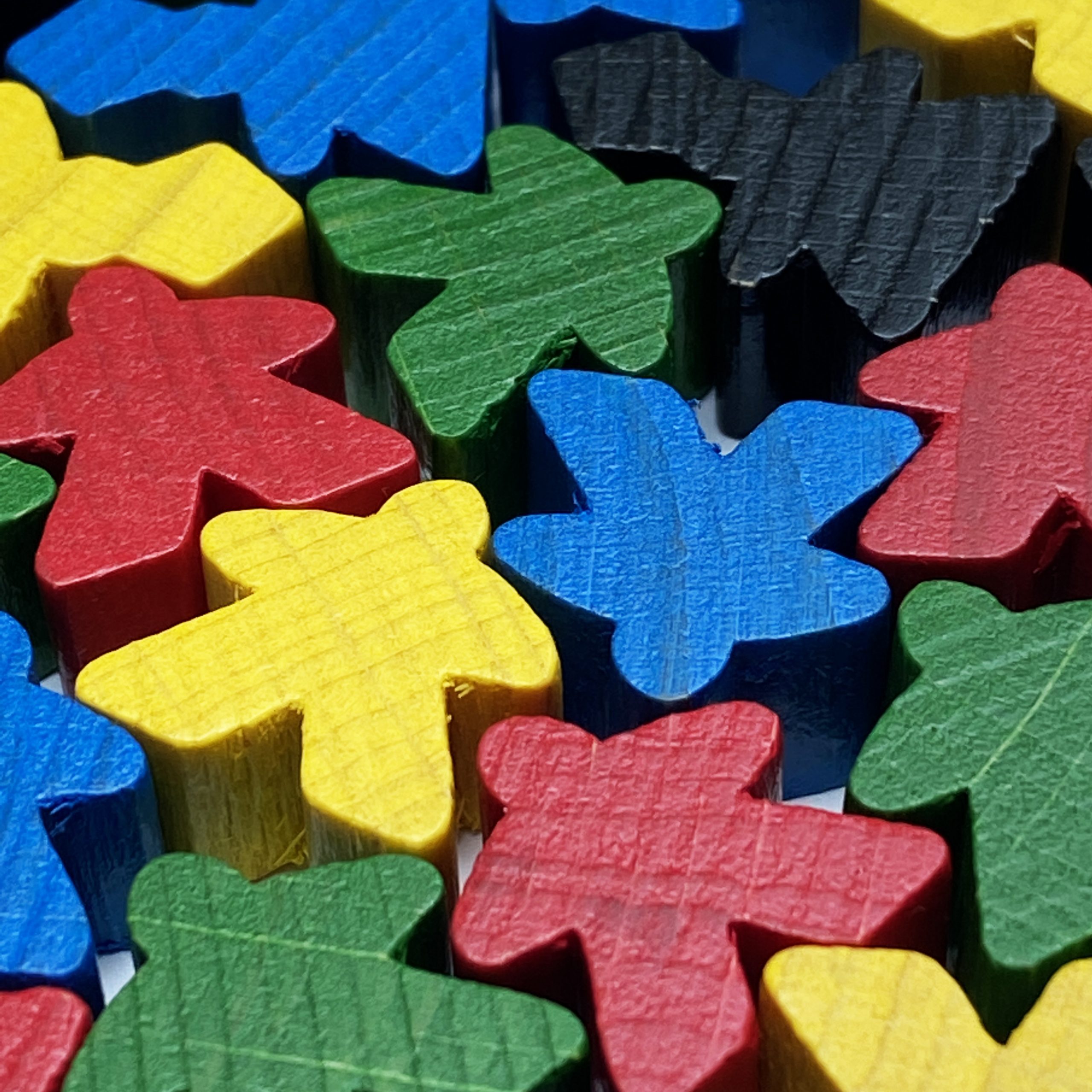 The now universal word ‘meeple’ was coined in November 2000 by Alison Hansel while playing Carcassonne, the fusion of ‘my’ and ‘people’ is now a synonymous term in the board gaming fraternity for any small figural playing piece.

Carcassonne sees 2-5 players compete for the most points to be the winner of the game. On their turn, players will draw a tile from a selection of facedown options and they will then place this tile to adjoining laid tiles making sure that any features fit together like a puzzle. They then have the option to place one of their meeples to claim either a road, city, field or monastery if it is on that tile and otherwise unclaimed.

Cities and roads keep being added to until they are finished. Cities are finished when the wall encircles the encampment and are scored at 2 points for every section of tile in the city. Therefore a city built with four tiles would be worth 8 points. Roads are completed when they end at a city, junction or monastery.

Meeples placed on fields become farmers, and remain on the field until the end of the game when they score depending on how many cities touch the field. Placing a meeple in a monastery converts it into a monk. It will score you nine points when you surround it in tiles, one point for every tile touching it.

With the exception of the farmers who don’t score until the end, whenever you score points, you get the meeple back into your hand to use again on other tiles. The game finishes when the draw piles run out and final scoring occurs. 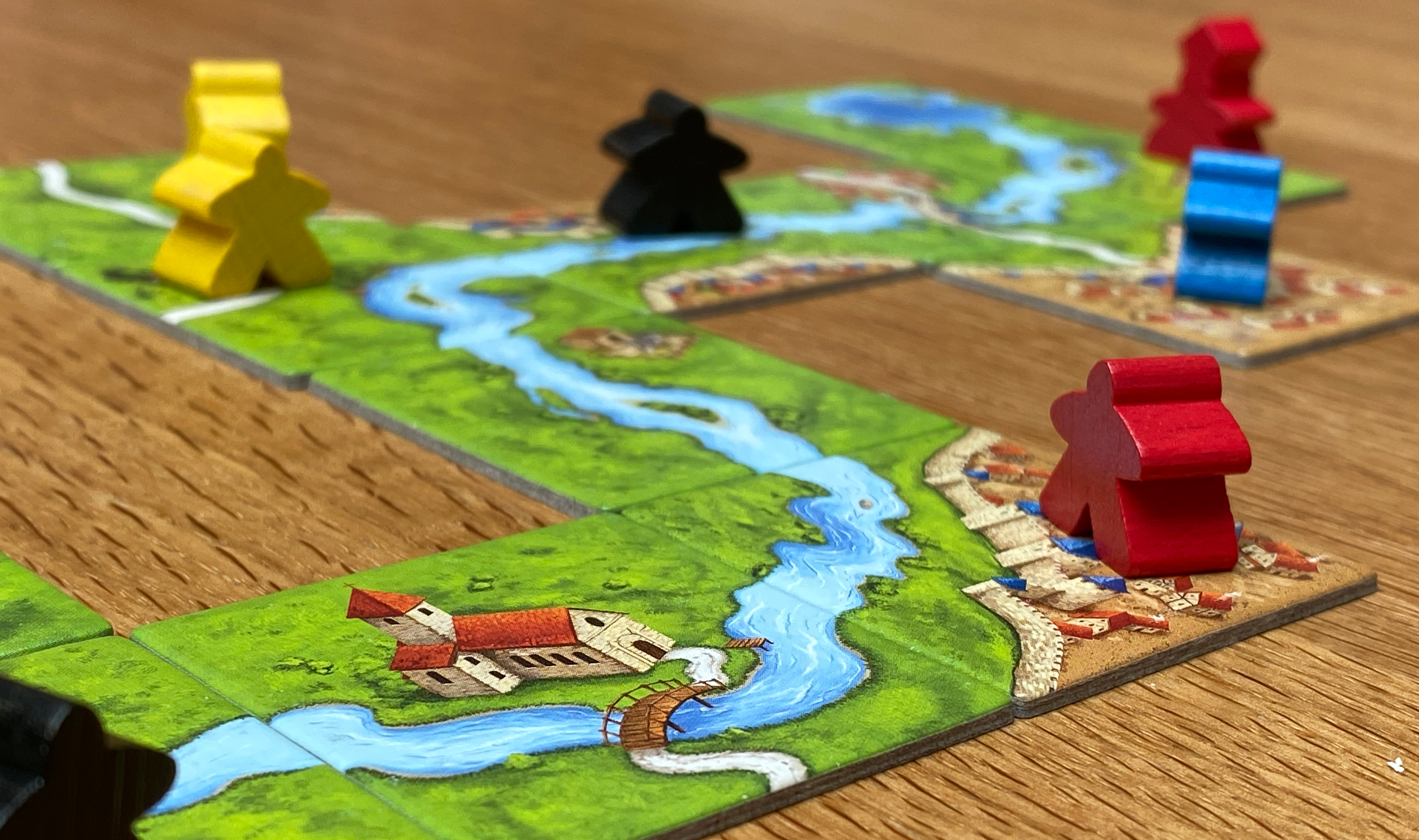 As of 2014, Carcassonne includes two mini expansions that you will likely never play without. The first expansion is The River. This gives you a selection of tiles that you have to start with, each is a section of a river that spreads the map out nicely at the start.

The other is The Abbott. This is an additional meeple differentiated by the pointy hat. They can be placed on monasteries or flower gardens but cannot claim cities or roads. Flower gardens and monasteries score the same as a normal monastery. The benefit of an abbot is that if you do not place a meeple on your turn. you can score the abbot. This awards a point for every tile the abbot is touching. A good way of getting some small quick points or neglecting an area that won’t be completed.

Carcassonne feels like a gentle stroll through the French countryside and it largely is. There is lots of luck in the tile you draw and how it fits but lots of choice to keep you engaged. Keeping many options open is often a good tactic. The game can pick up a gear if you choose to share cities, and ramps up again as you can also attempt to steal them from other players. This is often where the game gets a bit meatier as your meeples can be swallowed up in a tit-for-tat battle. This tactic may or may not pay off.

Although you score as you go, there is a final end of game scoring, so you can never be too sure who is going to win until the end. This keeps interest as you will rarely be completely out of a game unless you let your opponents create a mega city.

The game is simple to learn but has a bit of depth to the decision making process. There should be little analysis paralysis when playing, so downtime is only due to the calm pace allowing for conversation. No bad thing when introducing new gamers to the hobby.

The puzzle-like tile placement is very satisfying when you finally get that perfect piece but can be disappointing if it doesn’t quite fit! Seeing the map sprawl in front of you gives this game real table presence.

Not many games scale from 2 to more players as well as Carcassonne, the game changes and presents different opportunities at different player counts, particularly when sharing cities and roads. It is also a game that most ages will understand and be able to compete at. When playing with my children and new players I don’t include the farmers as these add further complexity that isn’t missed. 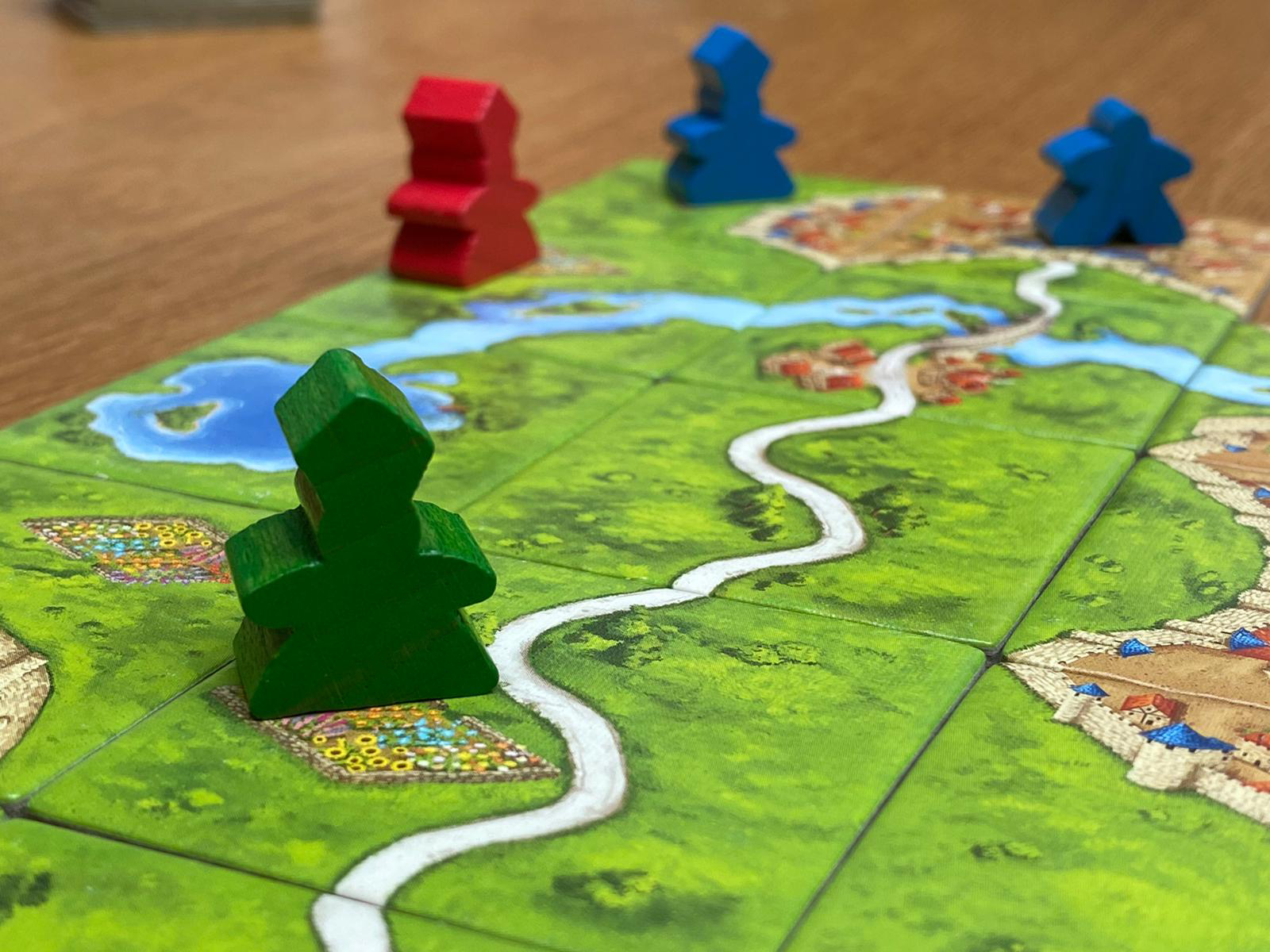 This review is for the Z-Man games version which caused a ridiculous uproar when released that the tiles were too bright and colourful. Oh, and don’t mention the change to the colour of the roofs – this caused uproar! Well, there comes a time where sentimentality can stifle progress. I like the tiles. I even prefer them to the images I have seen of the old pale and placid artwork of the original version. Change isn’t always a bad thing.

The meeples simplicity makes them brilliant especially in their bold colours. The tiles are good quality. I have played my copy countless times and they don’t show signs of wear. The instructions are clear and concise but may daunt those who aren’t used to reading rules. Take it step by step and you will be fine!

I know the box art looks a little dated but quickly bypass that. It is also a bit too big, but this leaves some room for the expansions that are available to purchase. The inside is nicely printed. I think it could’ve come with separate sealed bags for each different colour meeple but that’s me. 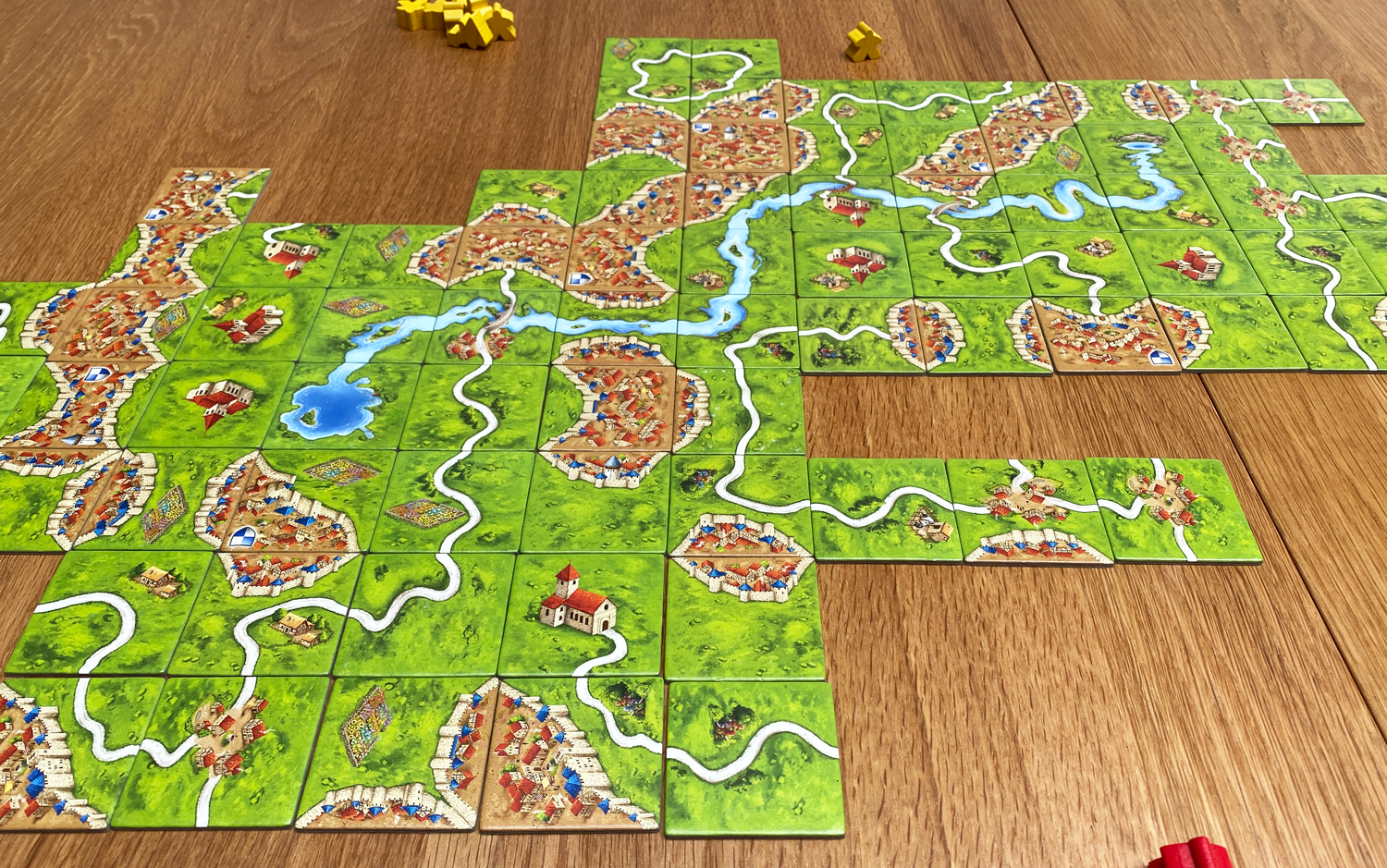 I have well over 100 games in my collection, considerably more if my wife isn’t reading this! Despite this, Carcassonne is still one of my favourite family games. Without farmers, 5 year old Max can play to win, he often won’t as he will get caught up in a meeple-sapping battle over a huge town, but he can be a stubborn whatsit!

Simply put, Carcassonne is a classic for a reason. It balances so much to make an entertaining and close game for all that play it. If you are new to modern board games, this is one of the first few you should buy. It works with 2 players just as well as 5, it works with the whole family and can similarly work with friends. Yes, there are other great games to progress onto, but this is a brilliant first rung on the ladder.

Carcassonne is one of my go to games to play with people who don’t really play board games. It is so easy to learn and pick up. The relatively quick and largely gentle play is in its favour. All this, coupled with a good dollop of strategy and you can certainly see why it has achieved its illustrious reputation. What’s more, it is well deserved.

If you already own Carcassonne and enjoy it, or are looking for other inspiration, you might also like these similar games: 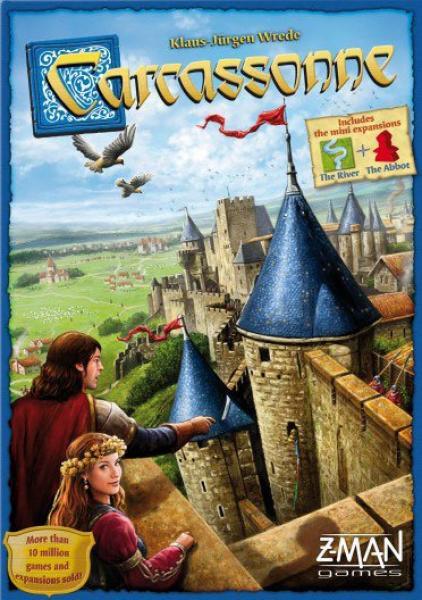