Advert: we were gifted this game from Zatu, this has not affected our opinion in any way.

Remember that movie with David Bowie in? The one where he’s in a maze and he has that conversation with Yoda “The babe with the power”, “What Power?” “Power of Voodoo” “Who do?” “You Do” before battling it out in an epic lightsabre duel. Oh hang on a minute I might’ve got a couple of films muddled up there.

So, do you remember that film with and X-Wing and the Death Star? Where they fly around a maze picking up pilots? Wait a second, that didn’t happen. None of this makes any sense! Then again, neither does a Star Wars themed version of Labyrinth from Ravensburger!

However, I am a big fan of Star Wars, and my family loves playing Labyrinth. I also have Salad Cream with my cheesy chips so I am no stranger to experimenting with weird combos! So let’s find out what sort of gaming cocktail has been created by Ravensburger.

Just a quick note before I dive in, there are a few different versions of Star Wars Labyrinth, check out the box lid in the photo below to make sure you are reading the review for the game you are interested in! 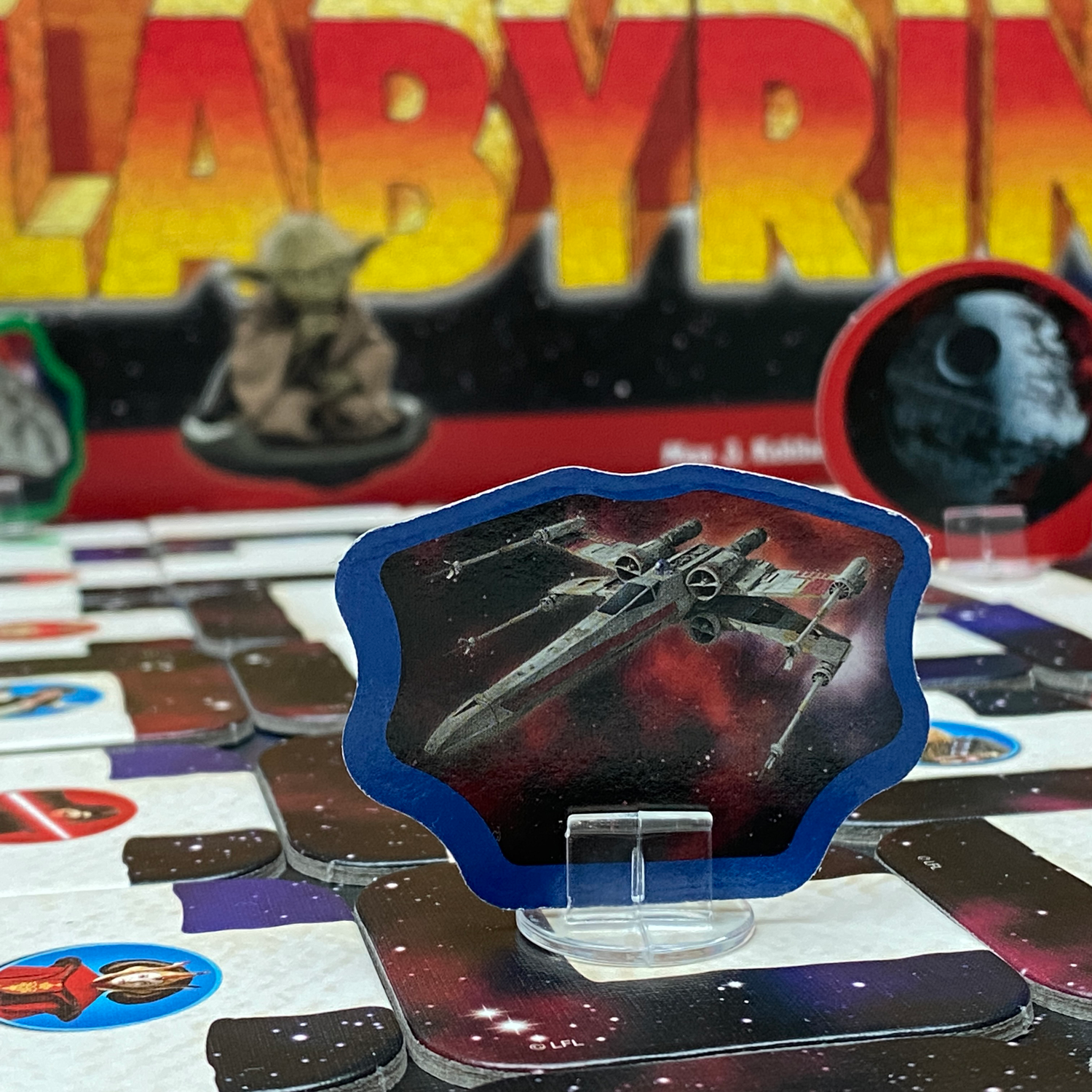 To setup Star Wars Labyrinth the instructions tell you to randomly place the tiles down on the board. I like to check that each of the two to four players can move a similar amount of squares and reach a similar number of characters so the game starts evenly. There will be one tile left over, don’t panic you will find out why in a minute. The character cards are distributed evenly between the players and kept face down. The relevant player tokens are placed in their corner of the board.

Players look at their top card, this Star Wars character is their destination. Collect all the characters in your pile of cards before anyone else does and you win the game.

Each player’s turn will comprise of two actions, the first is to slide the spare tile into the board. This creates an ever-changing maze that players need to adapt to. The second action is to move their piece as far as they can and need along the tunnels of the maze. If they can reach the treasure they can claim their card and look at the next card in their pile.

Playing the game really is as simple as that and that is why it is suitable for ages seven and up. 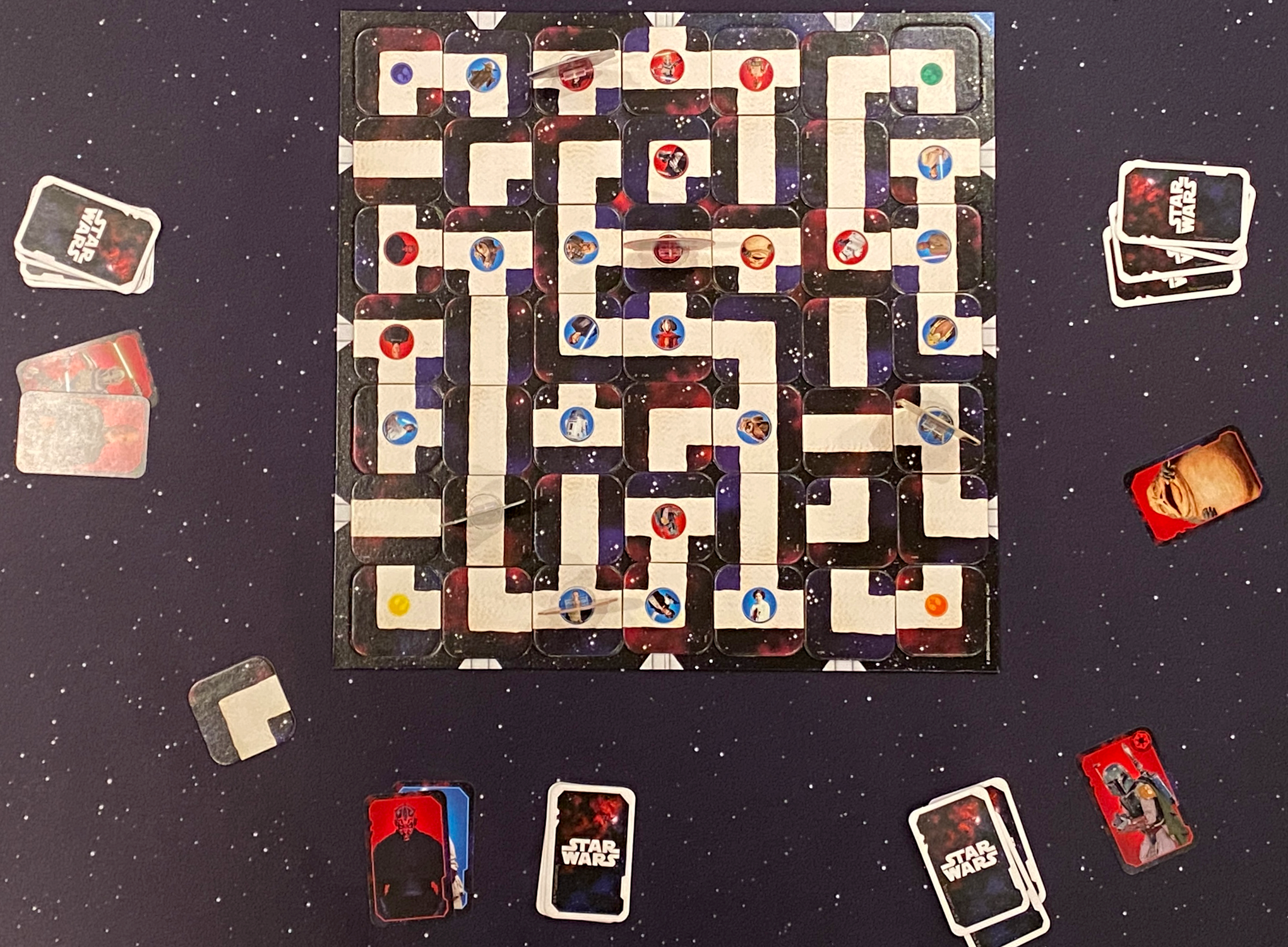 How it differs from the original

Well, I don’t want to state the obvious, but Star Wars Labyrinth is Star Wars themed –  the original wasn’t! If you know the original, the tokens you move around are now space ship standees and the cards are all now Star Wars themed. Pasted on theme aside, the only real difference is in a variant play option. This is where the Empire Strikes Back…

One of the tiles has an Imperial symbol on it, upon which is placed the Death Star standee. Four of the cards have the same symbol on them. If your objective is to claim one of these cards, instead of using your space ship to do so, you must use the Death Star instead.

Star Wars Labyrinth plays just like the original. You have this ever-changing maze to navigate your way through. My kids have grown up with Labyrinth, so are pretty good at winding their way around the board and equally good at changing the board to scuff each other up. Despite the age difference we all compete on an equal basis.

There is plenty of luck in the game. Which cards you draw, and how the maze shifts before your turn, plays a massive part in a player’s success. There is however, still enough of a puzzle to make you feel like you are invested and in control.

The additional Star Wars Death Star rules add a little bit. It can be fun when two players are trying to control the standee at the same time, but with only four cards that necessitate it, that fun battle rarely happens.

I will also say the more you play, the easier it becomes to find a path through the shifting maze. As a result, most kids age six or up will be fine, if playing with a grown up. 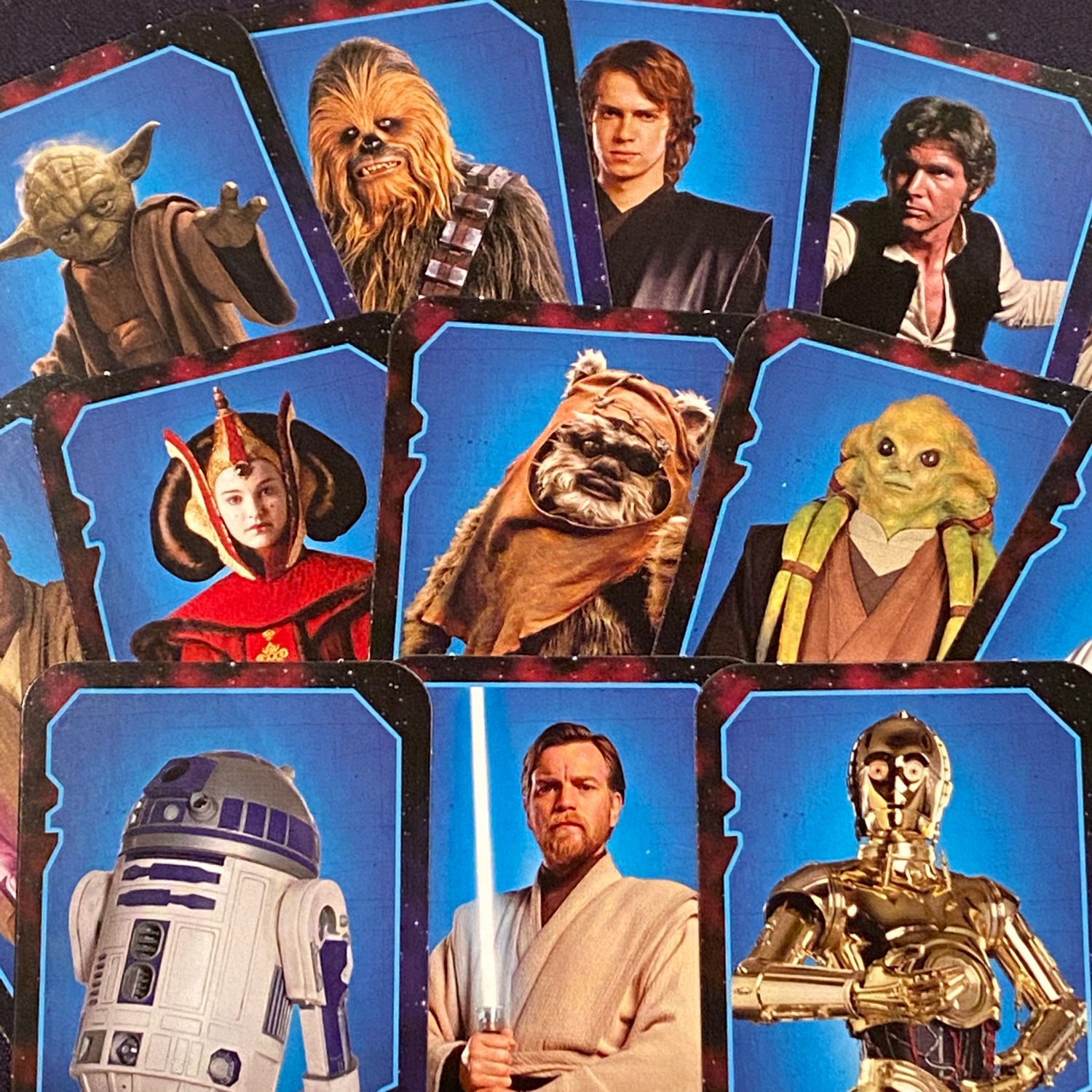 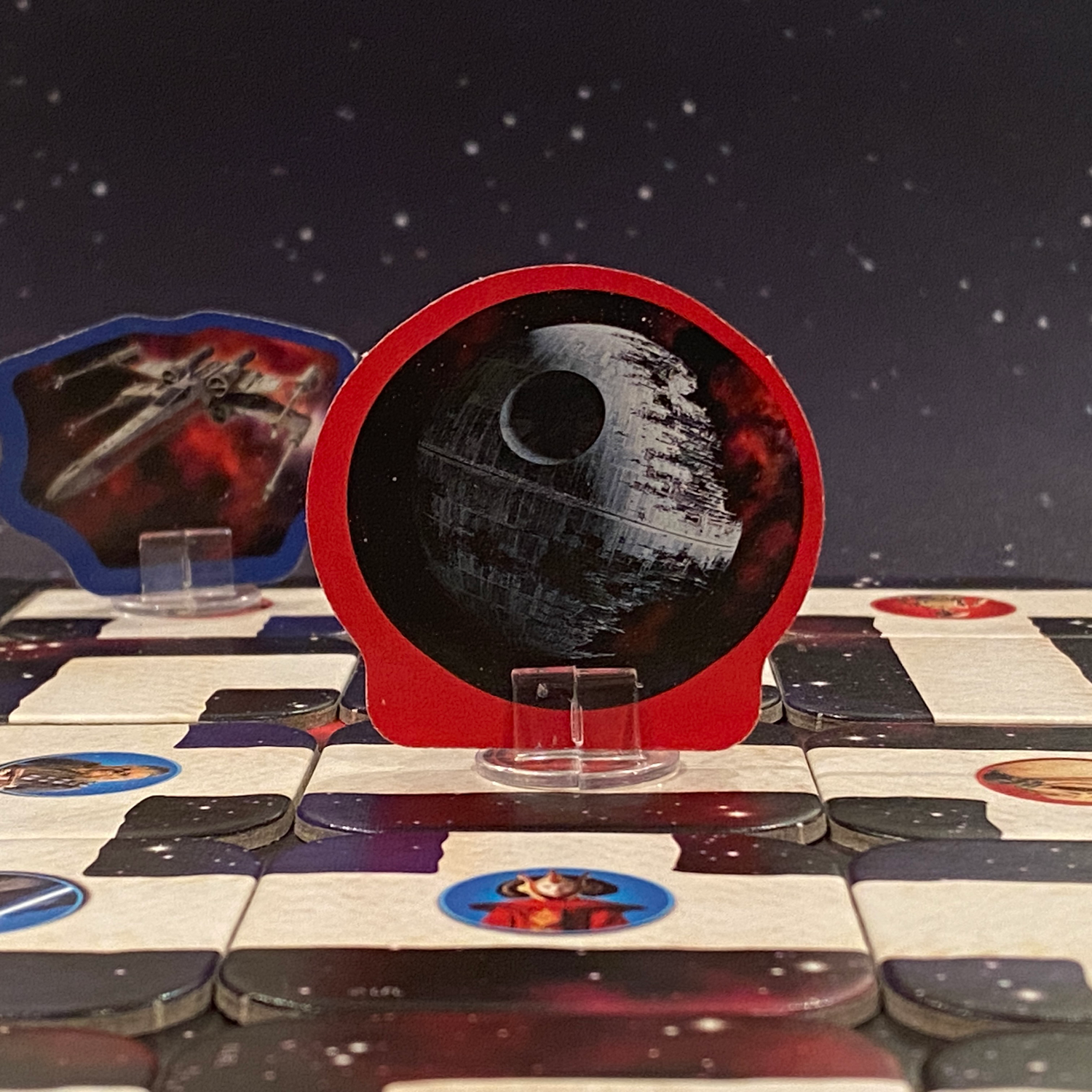 You know those really cool miniatures of wizards, warlocks and witches in the original Labyrinth game? Imagine how cool it would be if this version had your favourite Star Wars characters or ships brilliantly sculpted and traversing the maze. Well, you will have to imagine it, as you get little cardboard standees in this version. Now, there is nothing wrong with a standee, but I don’t think this iteration improves on its predecessor in that regard.

The cards have the characters as lifted from the movies and many of your favourites from the first six movies will be included. None of the stars of the later three movies make an appearance. Well actually Kylo Ren is on the box for some inexplicable reason, but is nowhere to be seen inside the box! I’m not so sure on the red and blue backgrounds, think it makes them look a bit cheap.

The tiles are the same great quality as the other versions. Occasionally they get a bit stuck as you slide the tiles along, but this is only due to your own misalignment and isn’t a major issue.

Overall, the components are good. The rules are also relatively straight forward.

Harrison (12): I like both versions a lot. I enjoy how the Death Star mixes is up. When two players have to control the Death Star at the same time it makes it trickier in a good way, and a bit more competitive.

George (9): It’s great to have all the characters and I like the Death Star.

Max (6): It is brilliant. The Death Star made it better than normal. 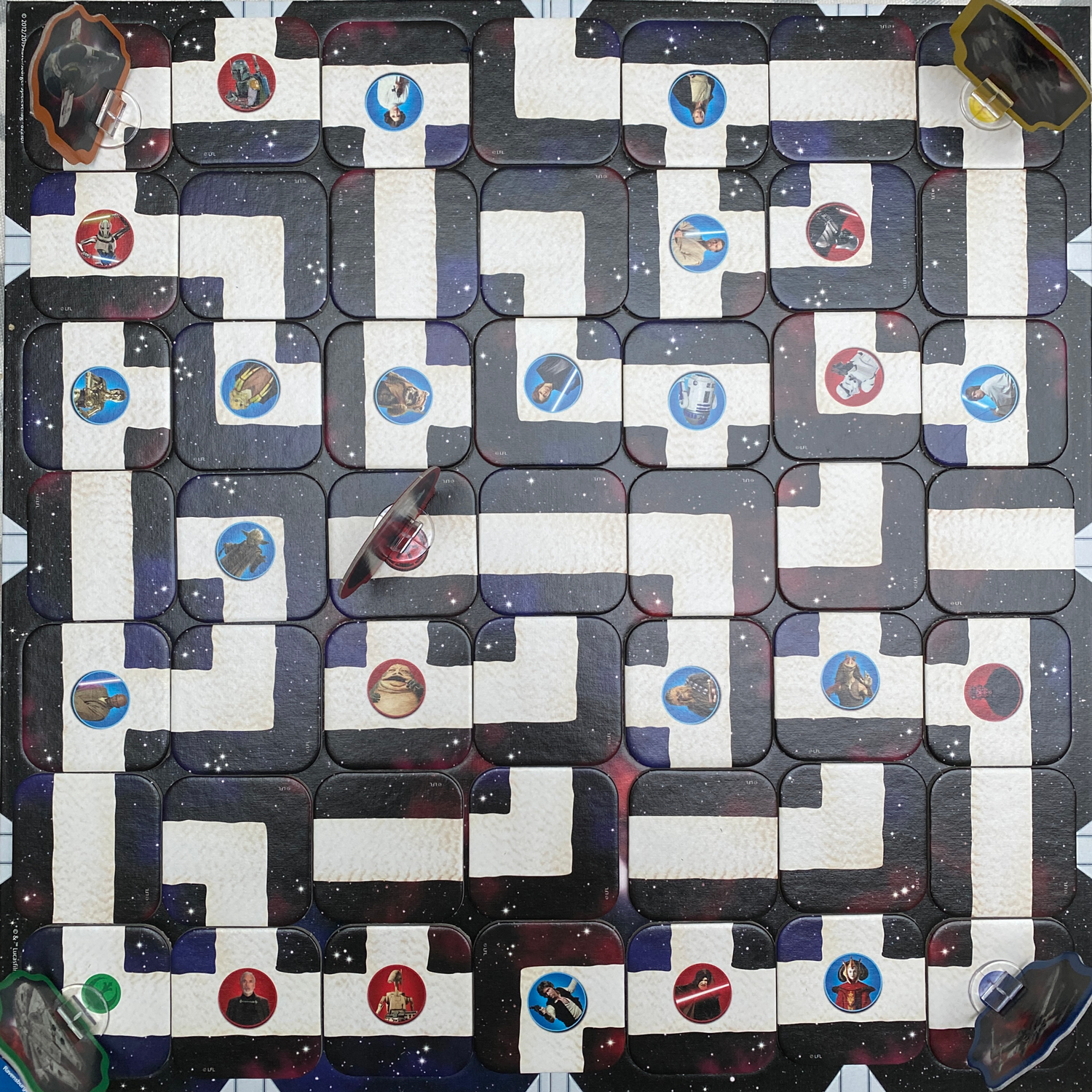 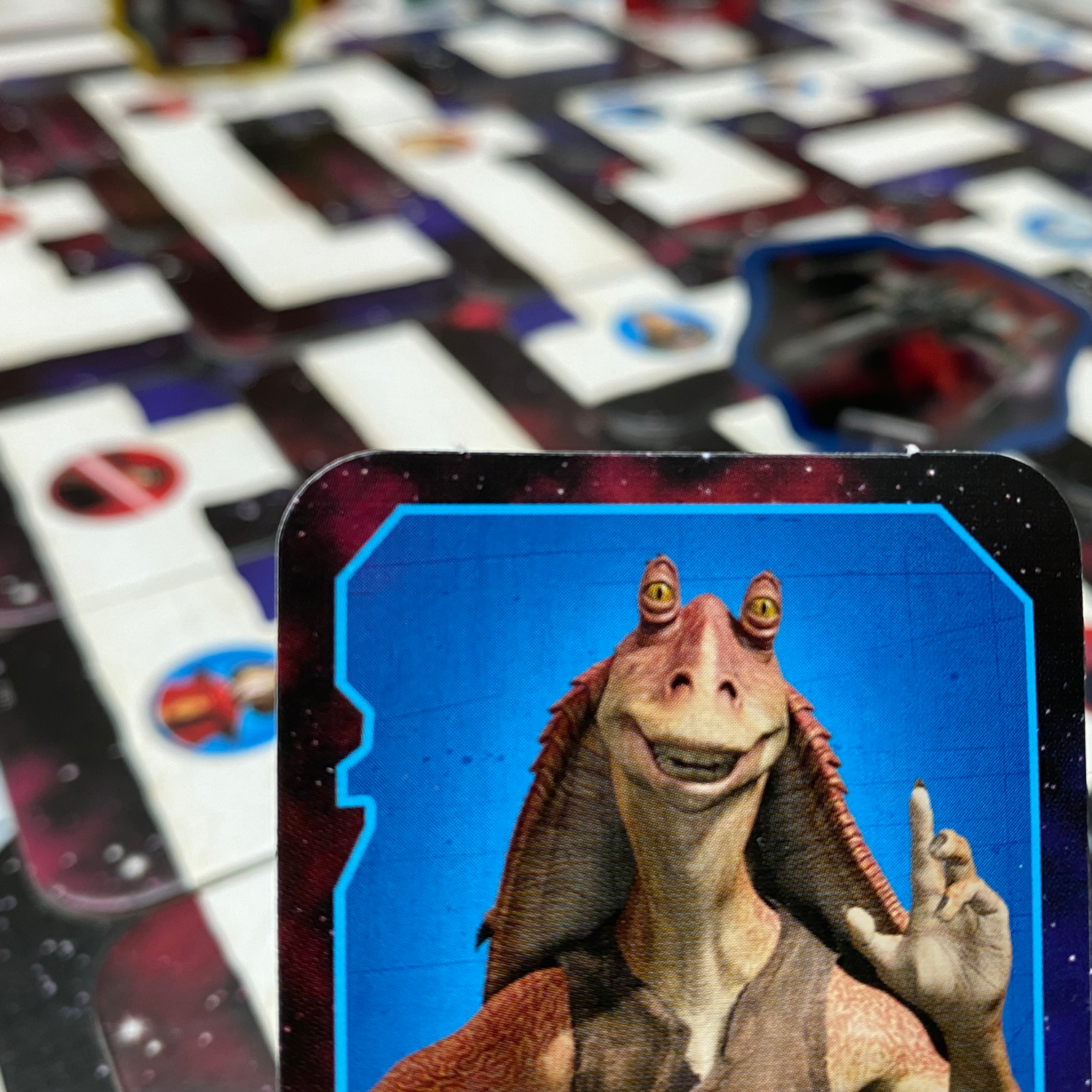 Okay, so I feel a bit deceptive as I have kept something from you all the way through this review. It will be a deal-breaker for many Star Wars fans, and that is Jar-Jar Binks is on one of the cards.

If you haven’t stopped reading at that point, that gives me a new hope.

The Star Wars theme for me just doesn’t make much sense. I reiterate that I am a Star Wars fan. I understand the original version scavenging a maze for treasure, it makes perfect sense. I also totally understand the Harry Potter version with magically shifting corridors like the staircases at Hogwarts. The Star Wars version just feels like they are cashing in on a brand.

Labyrinth is a splendid family game. I really do recommend it if you have any children under the age of 10. The board game won’t hold up often in a more grown-up environment. Yet, as a so-called adult, I do enjoy playing this with my children. My boys like the Star Wars theme as you can tell above. Perhaps it is their viewpoint that matters more than mine. On this occasion, my thoughts betray me and my lack of faith could be disturbing. Ultimately whichever theme you go for, the game is fundamentally very good beneath whatever styling you choose.

Labyrinth is a brilliant game. As a huge Star Wars fan I should love this even more than the original, but candidly I don’t. There is a minor rule change that can be fun, but I prefer the original version.

If you already own [insert name] and enjoy it, or are looking for other inspiration, you might also like these similar games: 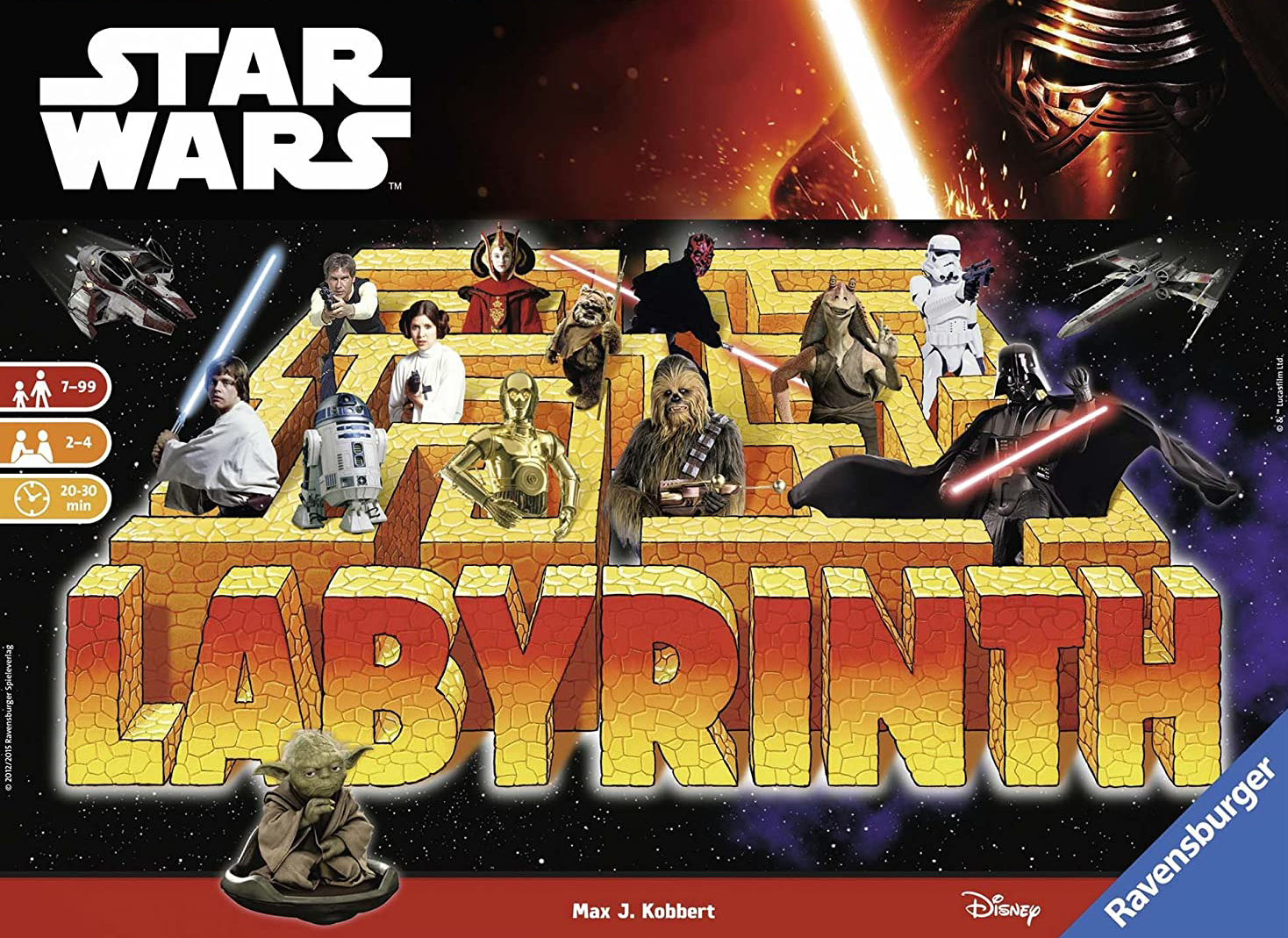 For clarity. We don’t get paid for our reviews. We were kindly given this game by Zatu, this has not affected our review in any way.

Taskmaster The Board Game Review Castles of Burgundy, Game of the Month – January 2021