Advert: this game was gifted by Iello, this has not affected our opinion.

Board games arriving in the post is one of the best feelings in the world. The first glimpse of the box in the flesh, the look at all the info on the back! Then, for me, the wait for the children to want to do an unboxing video comes and the excitement has to be put on hold, when all I really want to do is rip off the shrink, and read the rulebook. When Kitara arrived I was lucky that I could record the unboxing video immediately, as I really wanted to get this one to the table.

In my excitement, I misinterpreted a rule. We’ve all done it, haven’t we? In my defence, this was a new game and very few resources were out there to learn from. So I contacted the designer, Eric B. Vogel via BGG to ask how a certain situation occurred as I was clearly missing something. Well I was, and embarrassingly it was that I hadn’t read the rules properly. Always good to have that pointed out by the game’s designer! I have to say I love the board game community. Its accessibility, positivity and shared enthusiasm from designer down to consumer is like no other. So onward with a review of Kitara, oh and don’t worry this review is based on the correct rule set! 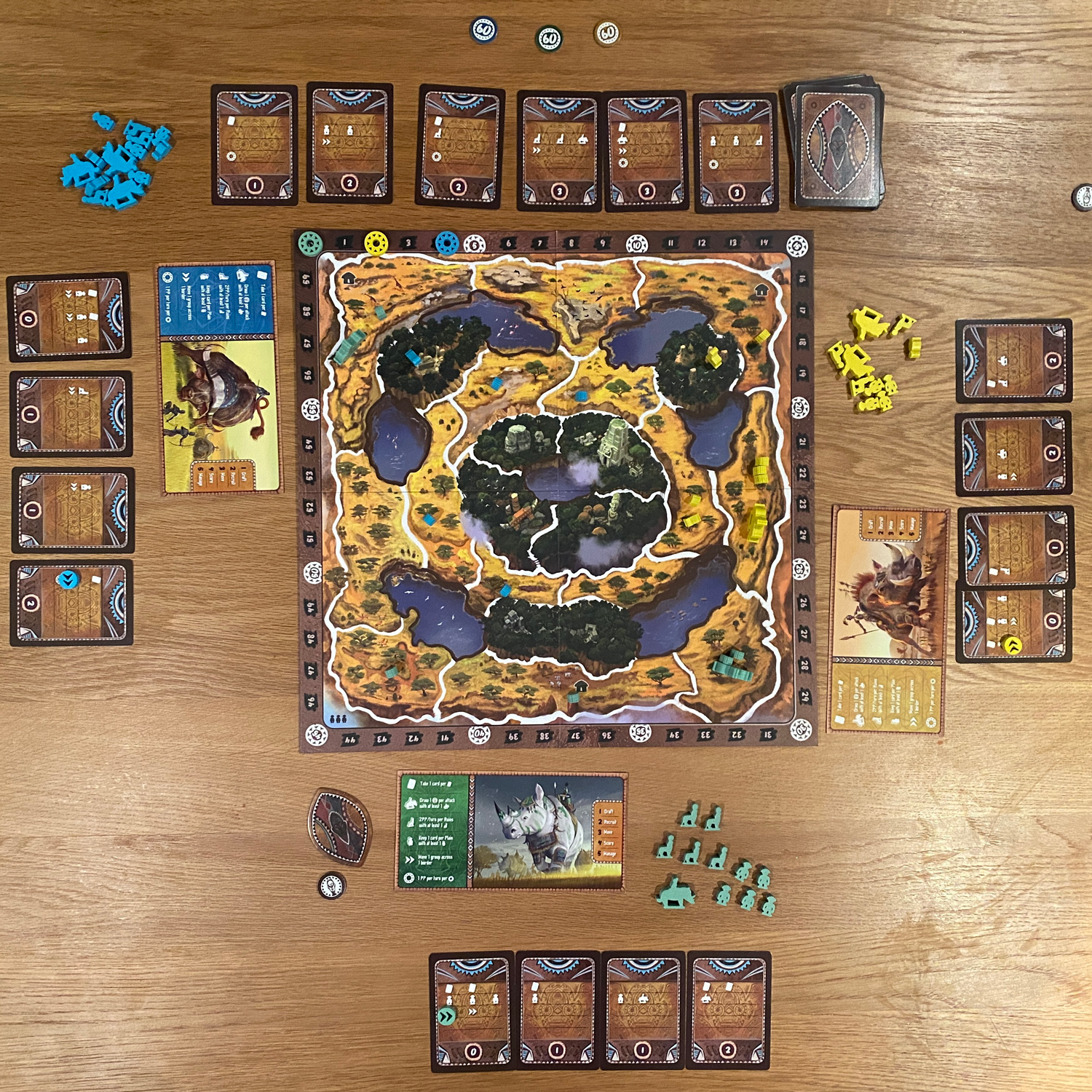 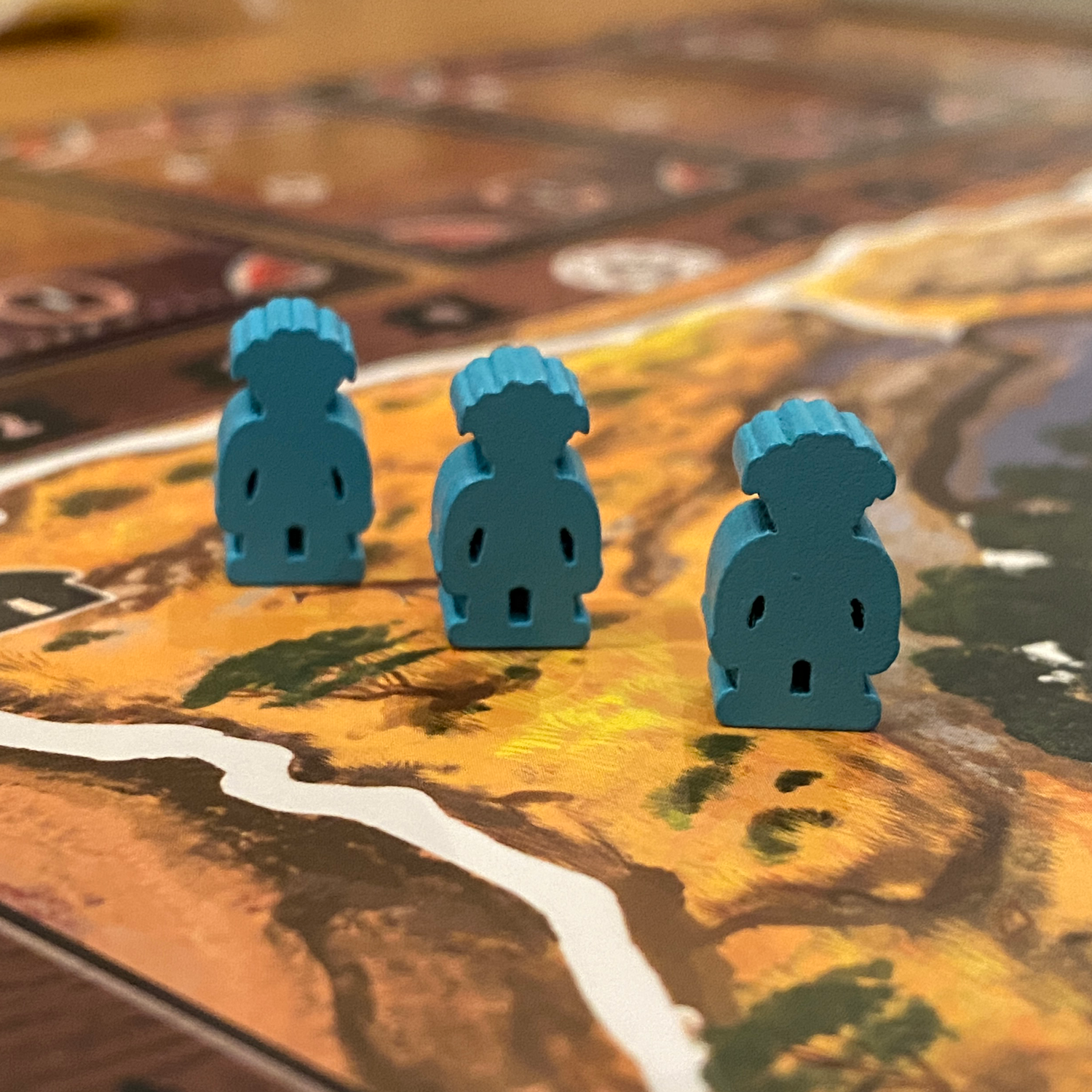 Kitara is a card drafting, tableau building, area control game for 2-4 players. All competing for the most victory points to win the game.

There are three different boards for each player count. At the start of the game, each player is issued with a tribe and a starting card.

Workers come in three forms. The basic Warrior who needs to ideally be on Savanna spaces to feed the workers. Master-Animals are centaur-like beasts and will gain two points on Ruin spaces. Finally, the rhino-riding Hero who will grant bonuses if they are used in attacks.

Three warriors for each player are placed on the board to start with. Turns of the game are structured into five phases. Drafting a new card, recruiting any pawns, moving and attacking, scoring and finally managing your Kingdom (feed your workers).

Your tableau of cards will dictate what you can do. These cards will establish how many cards you can draft from, the number of movements and how many troops you can have on the map. Some cards also offer victory points. Cards need to be fed during the management phase and to do so Warriors need to be on as many Savanna spaces as there are cards, otherwise you will be saying goodbye to some.

Attacking is simple: if you have more pawns than your opponent when moving into one of their lands they are forced to retreat. If a Hero is included in your attacking force then you have the added advantage of diving into a blind bag and pulling out a victory point token. Although you can pull from the bag many times in a turn you can only keep one VP token per go.

The cards have different ages on them and when you reach age 5 the game ends, after a final turn some end of game scoring occurs and the winner is crowned. 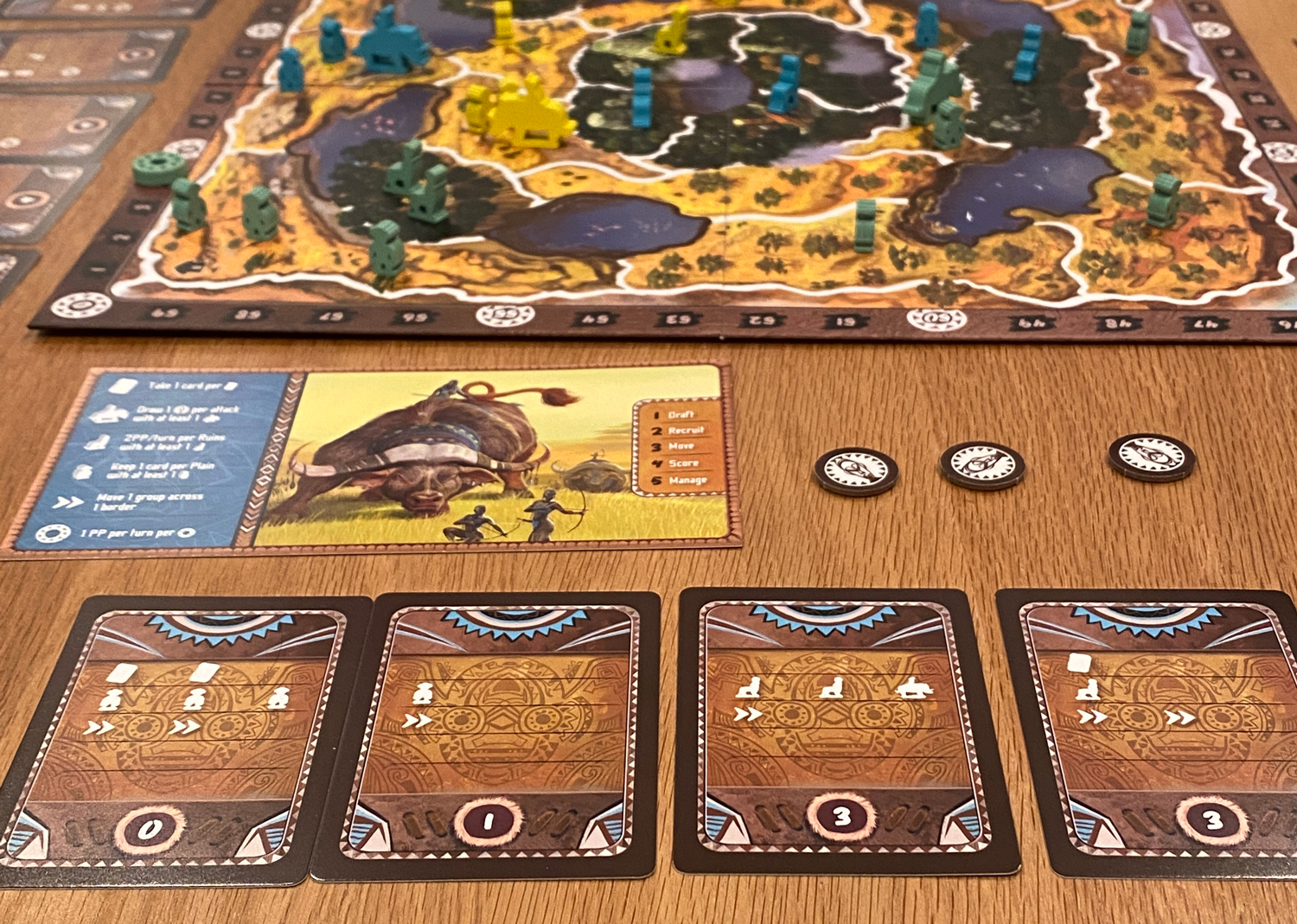 The quickest and easiest way to describe Kitara would be to say that it is the lovechild of Small World and Black Panther. I mean it doesn’t have all the cool tech of Wakanda but it certainly has the vibe of it.

In Kitara, you are playing on a small map. There are a lot of options to do on your turn that are constricted by the tableau you build. Because your choice is limited during the draft early on, it can be tricky to get the cards you want. In a two player game an additional card is discarded every turn to try and balance this.

I think the way combat is undertaken is superb. Instead of losing troops, the defending player retreats to the nearest location This reinforces the back line and quite often hinders further attacks. It can be annoying to lose Savannas but would be intolerable if you were losing troops. It really is a clever way of dealing with combat and makes it seem considerably less malicious than in some other games. For me, this makes it great for a competitive family.

If all players were to gang up on one player it wouldn’t be much fun. However, the combat resolution does hinder that a bit as an attacked player becomes stronger, so it naturally ebbs and flows away from that type of play.

Kitara works at all player counts. There is more downtime with more players. This is because you cannot be sure what cards will be available and how the map will look until the previous player has finished their go.

The board game comes with two decks of cards to mix things up. Blue and red decks are well balanced and offer a welcome variation. 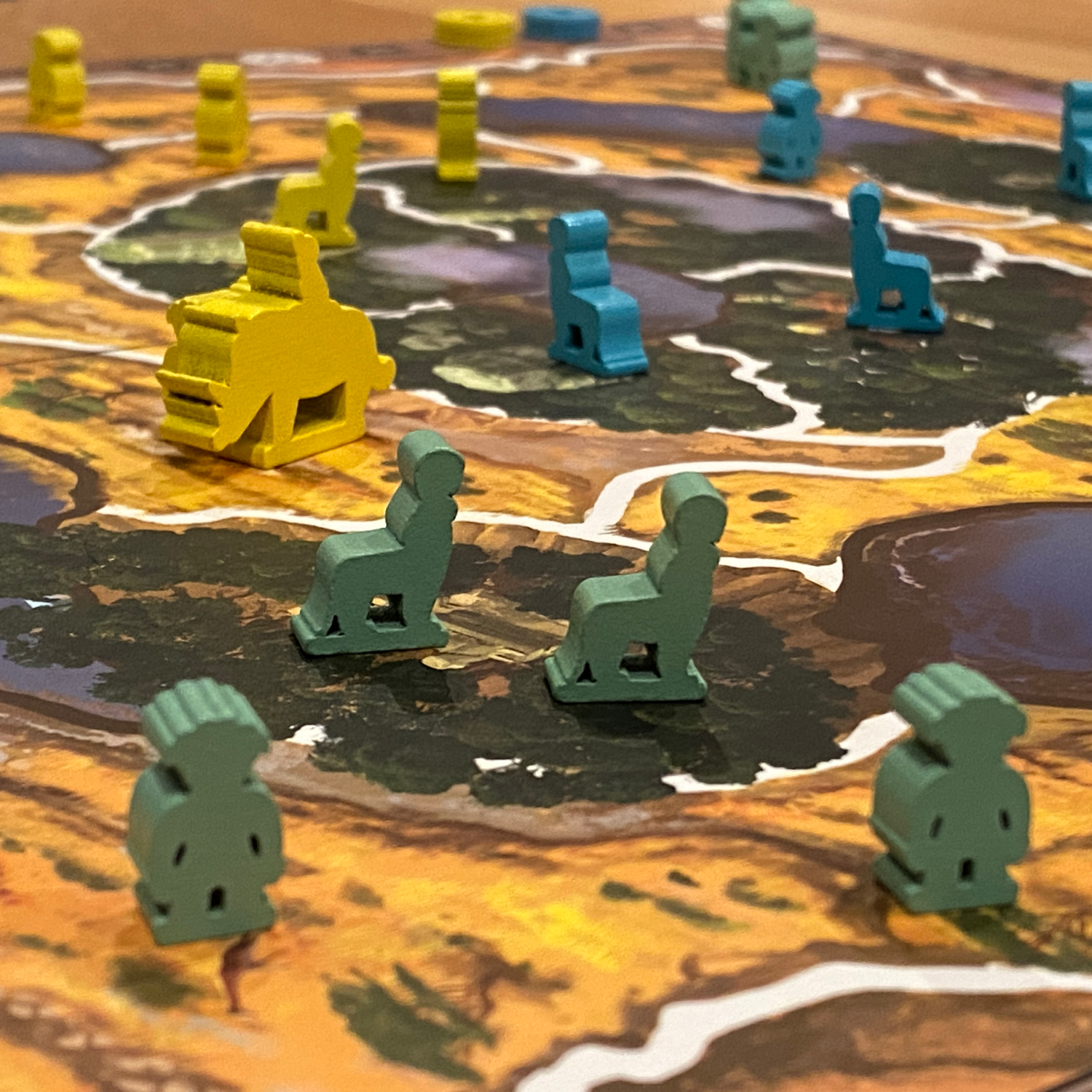 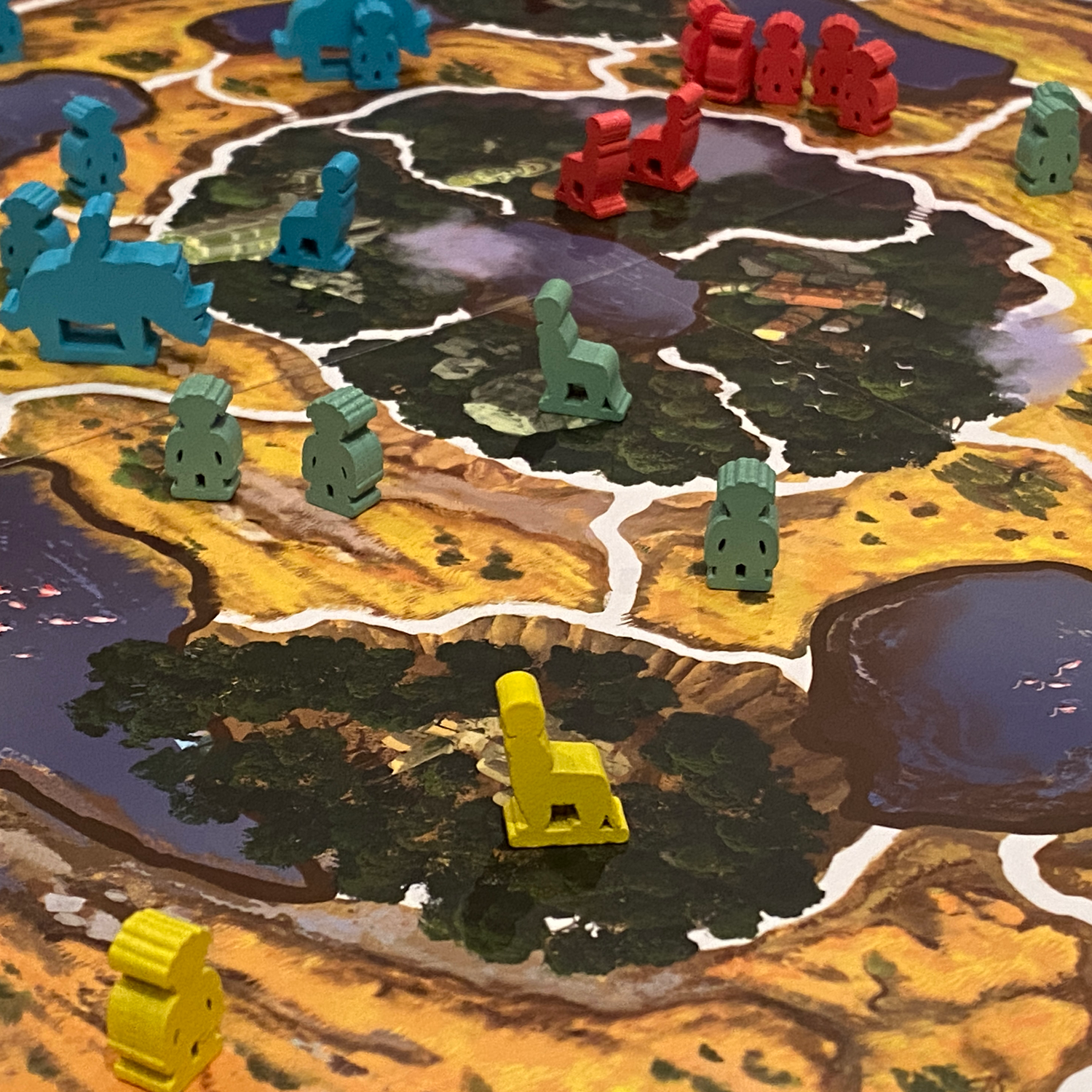 The components are brilliant, I mean look at all those wooden tokens and their awesome colouring, no complaints from me there, just a massive thumb’s up! The cards are clear and the board is a joy to play on too. My only minor gripe would be that age 5 cards that spark the end of the game could be more obvious, with say a different colour border or over-emphasised number, as they can easily be missed.

A lesser man, might say that the rulebook was not clear enough and made me make a mistake. Sadly, I can’t point the finger of blame at anyone other than myself. However, in my chat with the designer I did discover that you are never allowed to discard your start card and that isn’t in the rules. I think that can be forgiven as I can’t see why you ever would. Unless that is, you got a rule wrong like me! 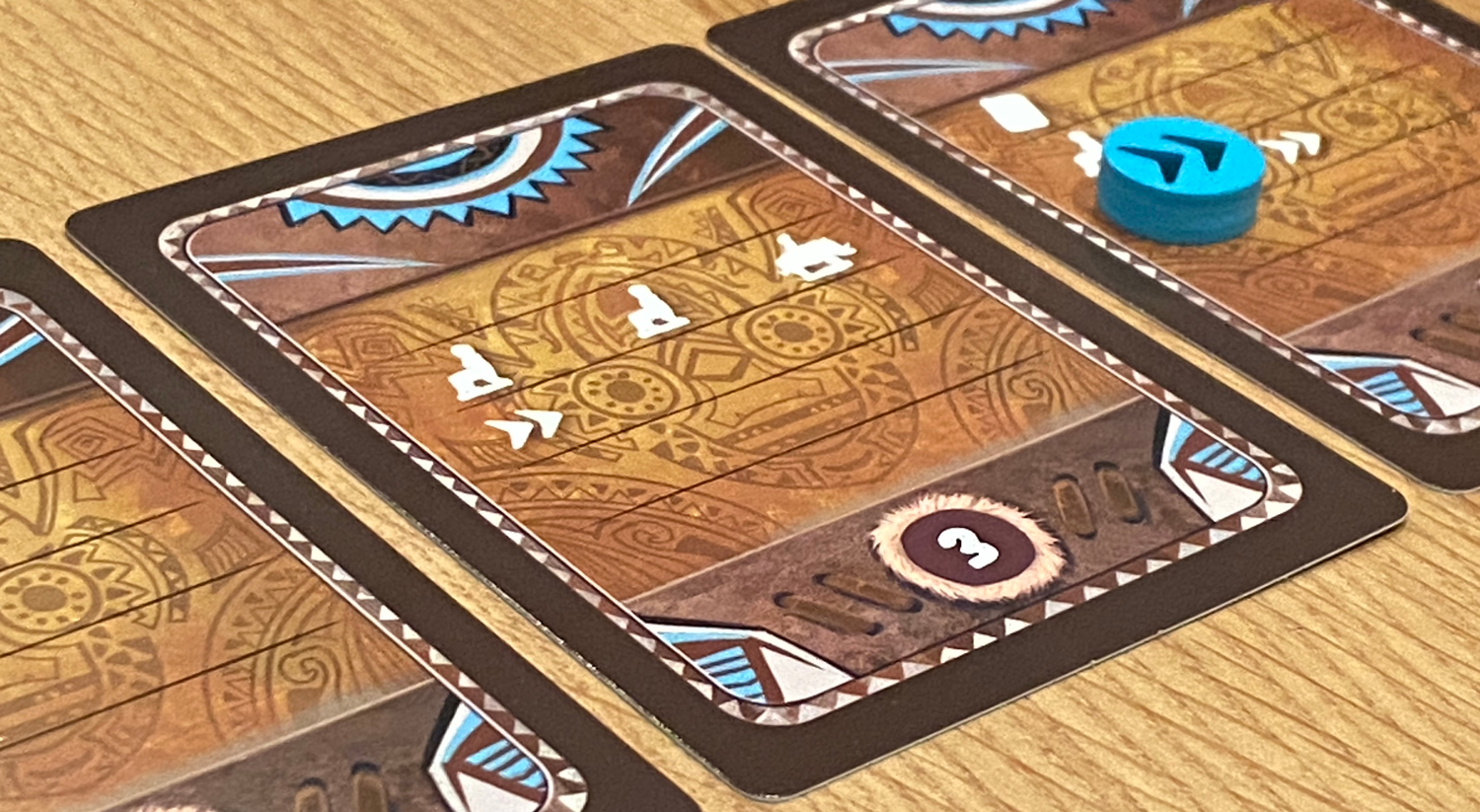 Kitara has some interesting decisions to make with a few different ways of gaining victory points. This variety allows for different strategies to come to the fore. Kitara also regularly provides very close games with narrow victories where anyone can win. I like that in a game.

Two and three player games are where it shines for me. The play time of around 45 minutes is also about right for the weight of it. Kitara never ends too quickly nor does it burden the table for longer than it should, even with minor analysis paralysis.

It is a lovely production, the board looks brilliant towards the end of the game with all the tribes on the board.

I really enjoy playing Kitara. It provides enough to make the brain cells whir and chug along, but with simple turn phases that makes it accessible for those aged ten plus. Once you correctly read the rules of course!

Kitara is a brilliant family game. It provides fantastic components and offers enough strategy to keep all players entertained for the duration. I particularly enjoy the way combat is resolved too.

If you already own Kitara and enjoy it, or are looking for other inspiration, you might also like these similar games:

Buy Kitara
from Out Of Town Games 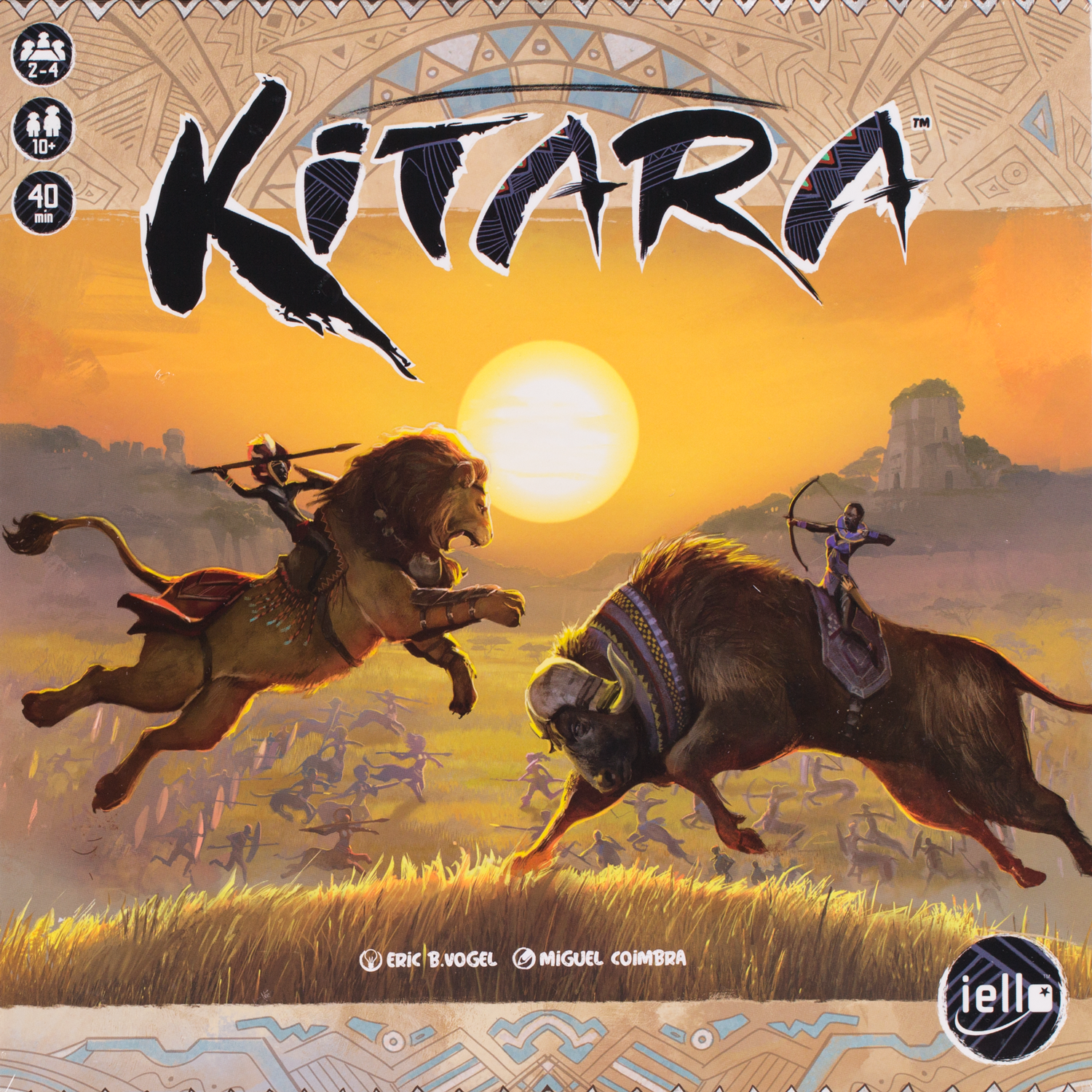 For clarity. We don’t get paid for our reviews. We were kindly gifted this game by Iello, this has not affected our review in any way.