King & Assassins is a two player asymmetrical medieval strategy board game by Polish designer Łukasz Woźniak. The game was first published in 2013 with this deluxe edition appearing in 2018. It is published by Krakow-based Galakta who translate and republish a lot of major games in Poland. Don’t panic the instructions are in English!

This turn-based game involves a mix of strategy, decision making, bluffing and a pinch of luck. It is also the closest thing you will get to a board game version of the computer game Assassin’s Creed.

The backstory is that the evil tyrant of a king has returned with his loyal knights and decided to go for a wander around the city streets, despite the civil unrest. However, there are assassins among the angry mob that are waiting to make an attempt on the king’s life.

Regardless of which side of the board you decide to play, you set up with playing pieces on designated squares. The pompous king is surrounded by his bolshie knights and the angry mob are placed on their squares. The wannabe killer then choses three townsfolk that will become assassins in disguise.

Movement is dictated by a pile of 27 cards. Each cards state how many action points the two players can use. The king and his knights go first and you are off and playing. The king is a bit lame and can generally only move one or two spaces at a time, but the knights can jump up and down from buildings and push the miserable protestors around. Some cards allow knights to capture a random citizen who may or may not be an assassin in disguise. Between them the knights usually get five to seven action points. If you run out of action cards playing as the king and he isn’t safely back home – the opponent wins.

The assassin then gets to move the grumpy protestors around, jumping up and down buildings if need be too. Via their movements they will try and bluff the king as to who the assassin may be. They can also reveal themselves as an assassin swapping out the playing piece to attack knights and/or the king and have slightly different ways of using their action points. Movement is a bit more limited as this player will only get four or five action points. Bearing in mind it takes two points to wound the king and a further two to kill him, these get used up pretty quick.

The two sides of the board changes the set up ever so slightly. The only real difference is that one board side has the king set up on one of two locations after the assassins are chosen and has one fewer cards in the draw pile. Ultimately play is the same on both. 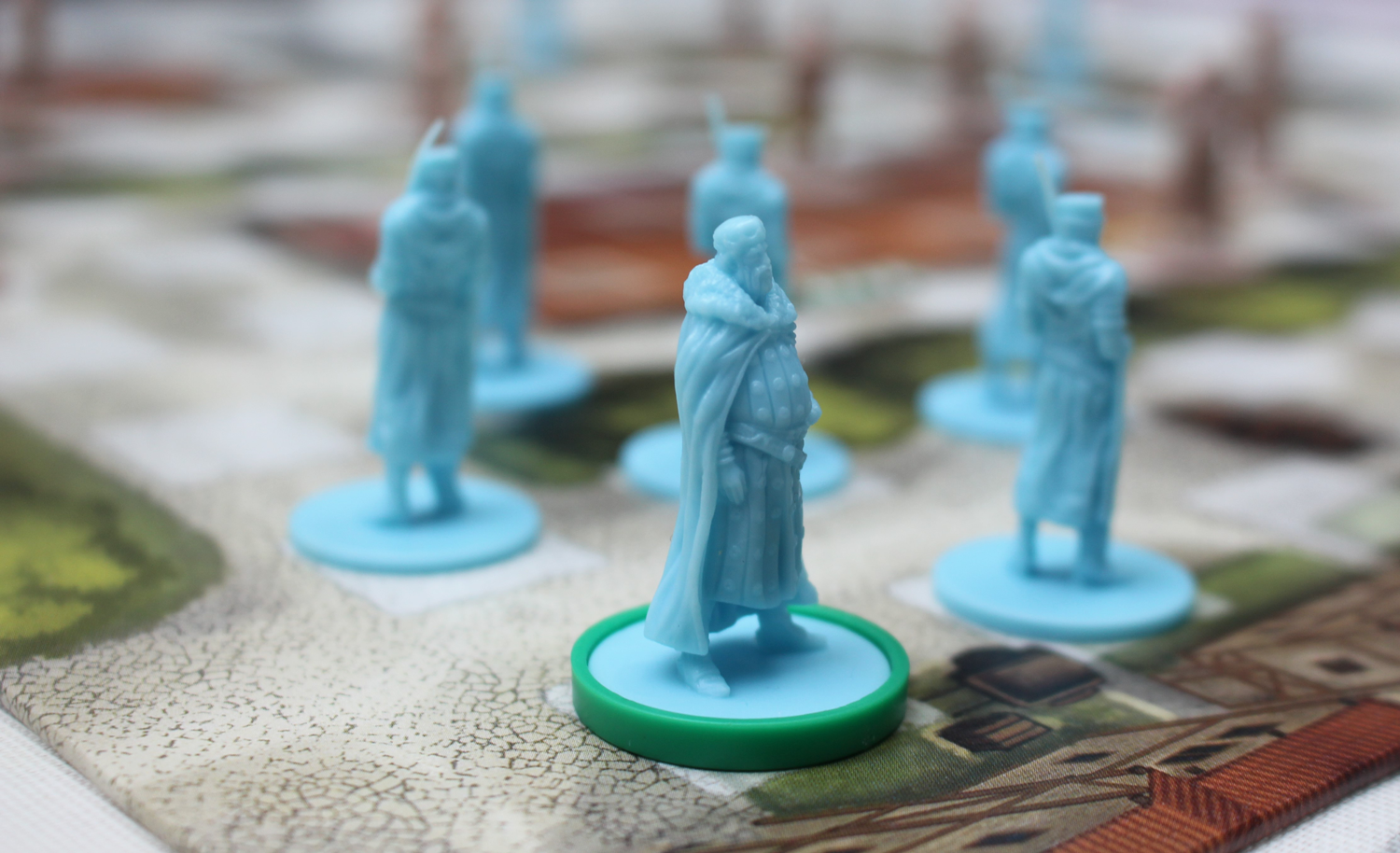 My wife likes winning and she seems to do so disproportionately with this game, so we play it often. When we have finished playing one game, we then turn the board around and adopt the other stance. This obviously doubles the play time to about 50 minutes. Having played King & Assassins from both positions I can honestly say that the challenge of winning from either viewpoint is equal.

When playing the game there is a bit of waiting for your opponents turn. It is trickier to allocate your action points playing as the king as you need to try and protect him as much as possible. The king also doesn’t have many spare moves so he pretty much has to be travelling towards his destination every turn.

In every game there is a moment when you have to leave your king slightly exposed and hope that the Assassin is not about to reveal themselves. Seeing your opponents moves play out is vital. Assassins will try and gauge which way the king is going and if there is a vulnerability, or a way in which you can position yourself to be a pain. The king will be considering every move of the townsfolk in case they can deduce who the assassin might be. So there is no down time and concentration levels have to be high. This keeps you constantly engaged.

There is elements of luck that come into play, the knights can capture a player on about half of their goes when a card permits it. It is bad luck if the first person they take is one of your would-be murderers just by chance. Similarly if they have a 50/50 chance of taking one of two players and they chose your assassin it’s a bit of a kick in the teeth. Playing from the other perspective, the king will probably be vulnerable at least once in the game (more if he decides to push his luck). When this vulnerability presents itself it will be unknown if the person with the opportunity can strike the king or not.

When I play there isn’t much talking, but I bet with some players a chattier game might allow for other bluffing techniques, you will find your style of play but for me interaction is a bit lower than some games. 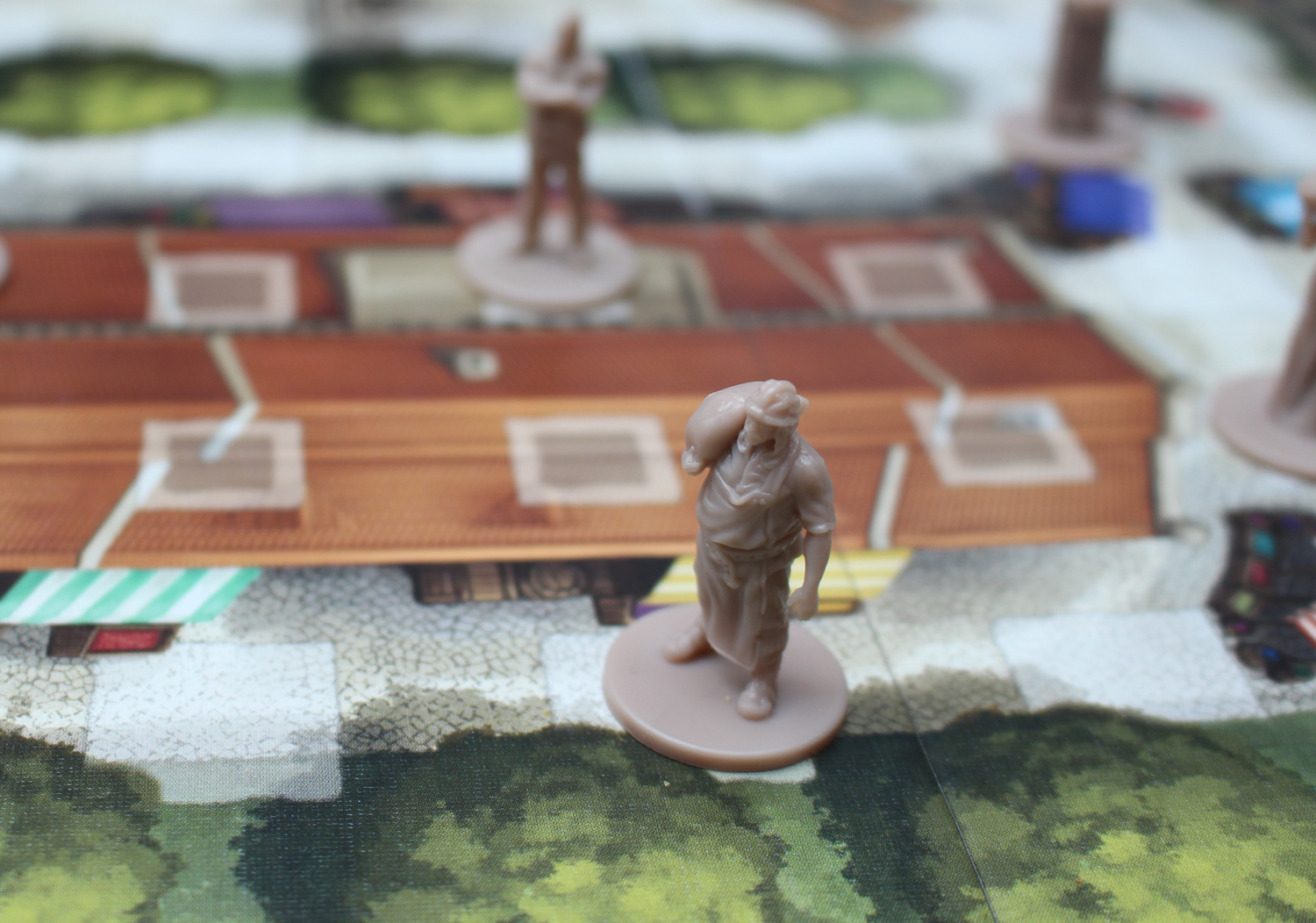 King & Assassins is beautifully themed. You really do soak up the atmosphere of the medieval market town as you move the nicely detailed miniatures around the game board. You also get some snap on and off discs that fit round the assassins highlighting them, Both sides of the board look amazing and present their own logistical challenges. The cards have awesome artwork in-keeping with the theme too.

So this all sounds amazing so far, but there must be a catch right? Well yes there is a slight hitch. The awesome miniatures are fantastically detailed and all adopt a different pose. However, the first few times anyone plays this, it is really difficult to work out which brown figurine relates to which colourful card. Looking at images of the older version the playing pieces replicated the cards perfectly so it was considerably easier to pick out who was your assassin in disguise. You do get round this and only once have I inadvertently lost an assassin through mistaken identity.

If you are a dab hand with a tiny paintbrush these miniatures are crying out to be painted. If you follow the colours on the cards, working out who’s who would be ten times easier. Thus solving the above issue. So much so, I have and you can see my amateur efforts below. 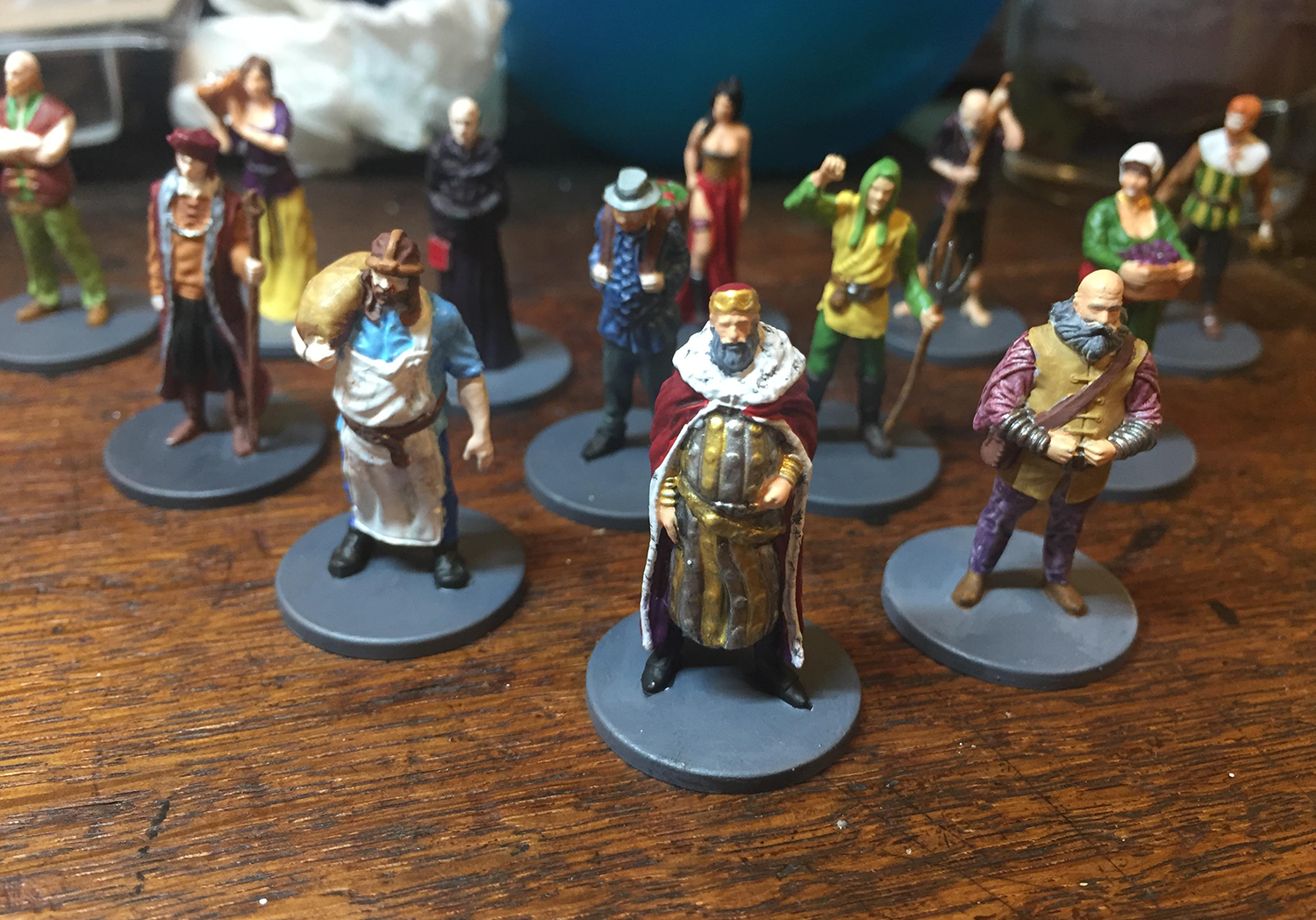 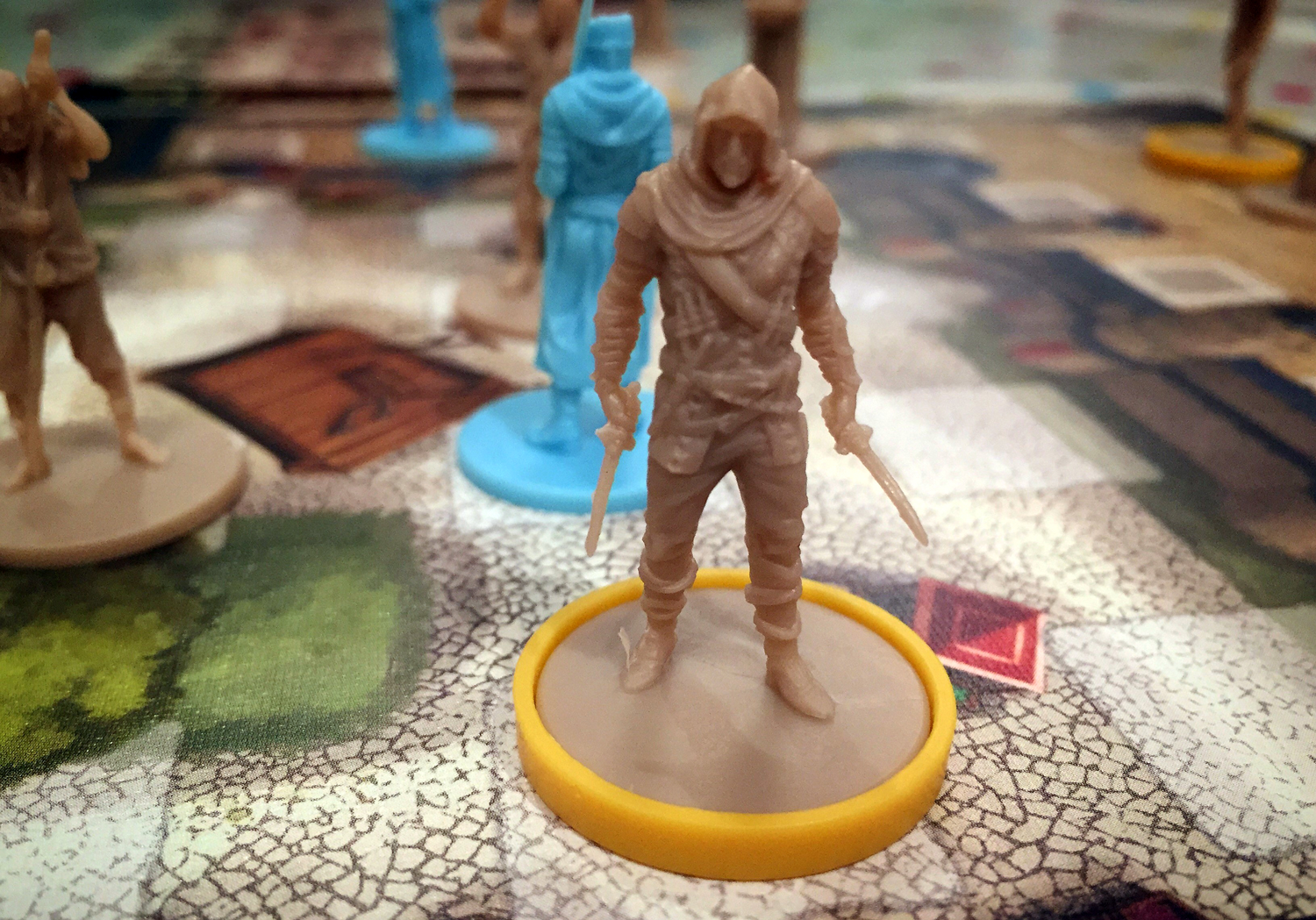 Both my wife and I have also played this with our 11 year old son, he gets it completely. I don’t think he would necessarily be able to play with another 11 year old, but he might if the other child had previously played with an adult too. The rules are ultimately quite straight forward as there is limited movements and options. So the box suggestion of 14 plus seems a tad high. Board Game Geek list it as 10 plus so perhaps it has been adjusted.

I have to say this is a very clever little two player game. It feels like a modern day chess but with bluffing. Thematically this game is immersive and you can’t help but care about winning. King & Assassins is quick to learn and there is a handy quick reference sheet showing how all the action points can be used. All positives for me.

Considering the asymmetrical play, this game is superbly balanced. Ultimately you are engaged and often engrossed when playing, there are times where your pulse might rise a little too. The hidden role mechanism is also an interesting one and really does add to the strategy and tactics that both sides have to adopt. It is a lighter weight game, generally playing around 20-30 minutes – that means you might just have time to do a role reversal!

There really doesn’t seem to be an ideal strategy for either side as something that worked once will not necessarily work the next time, especially if you play against the same opponent. So you both have to constantly adapt, or try something new as you learn how each other play the game. This, coupled with the two sided board allows for some pretty good replayability.

If you are looking for a new two player game this has to be a serious contender. In fact, it really should be in your board game collection if it isn’t already. I cannot remember how I stumbled across King & Assassins, but oh my, am I glad I did. I think you will too!

If you already own King and Assassins and enjoy it, or are looking for other inspiration, you might also like these similar games:

If you want to buy King and Assassins Deluxe Edition after reading our review click on one of our affiliate links below:
(note there has been no affiliate links until this point) 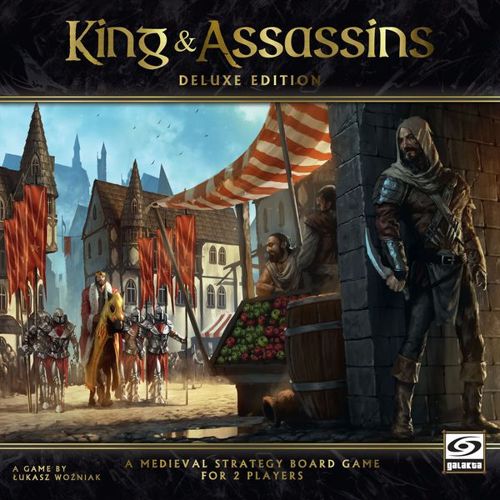