Advert: this game was gifted by Games by Bicycle, this has not affected our opinion.

When I think of the New York Stock Exchange I imagine, probably stereotypically, of people shouting down telephones “buy, buy, sell” with their sleeves rolled up. Their desks would have half their lunch strewn across it, before a bevy of blinking computer screens.

I dare say this was not the image that the 24 founding brokers of the New York Stock Exchange envisaged when they gathered outside Wall Street in 1792. So instead of the hullaballoo of the modern floor, in their latest light strategy game Games by Bicycle transport you back to the more gentile, yet perhaps more unpredictable, days of market trading. 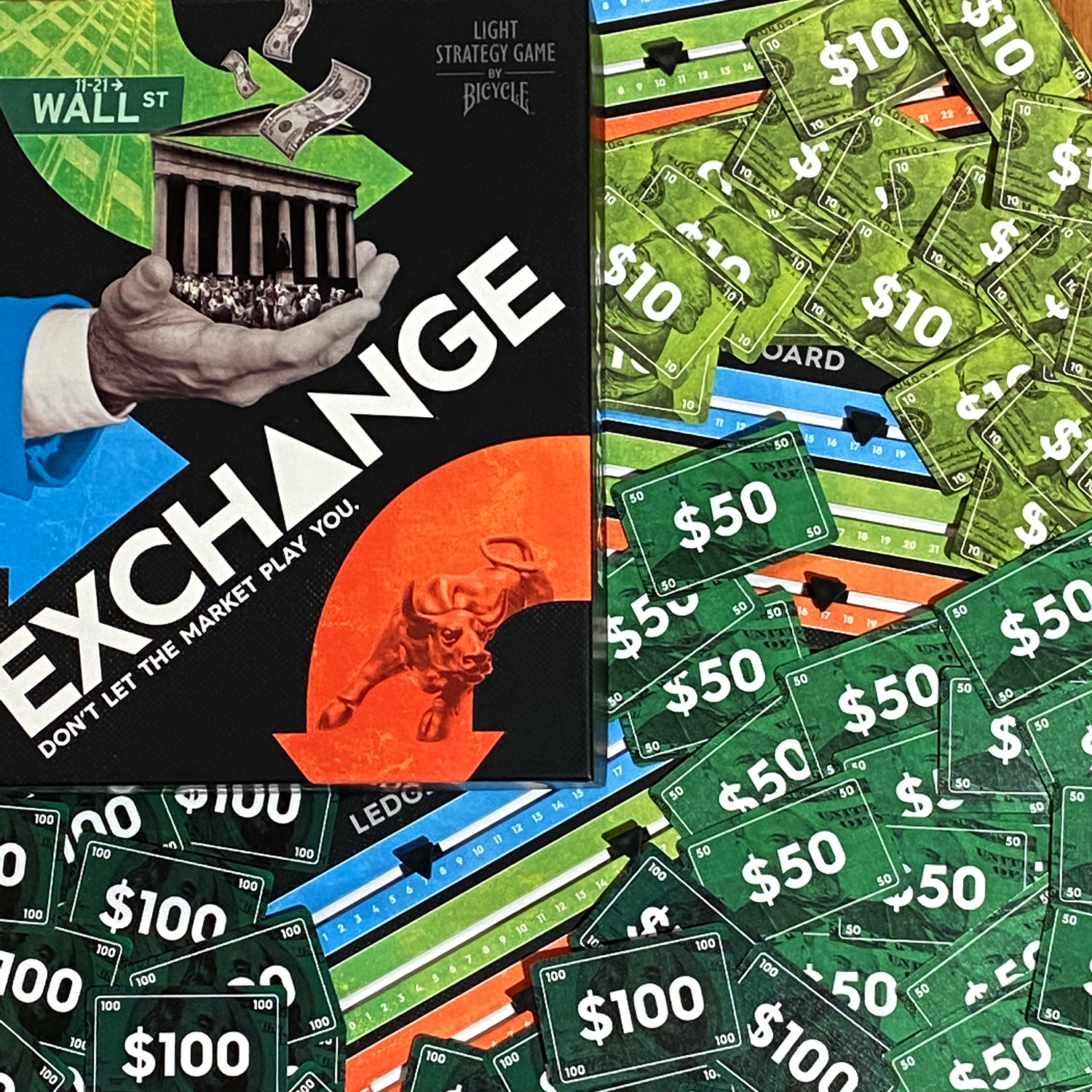 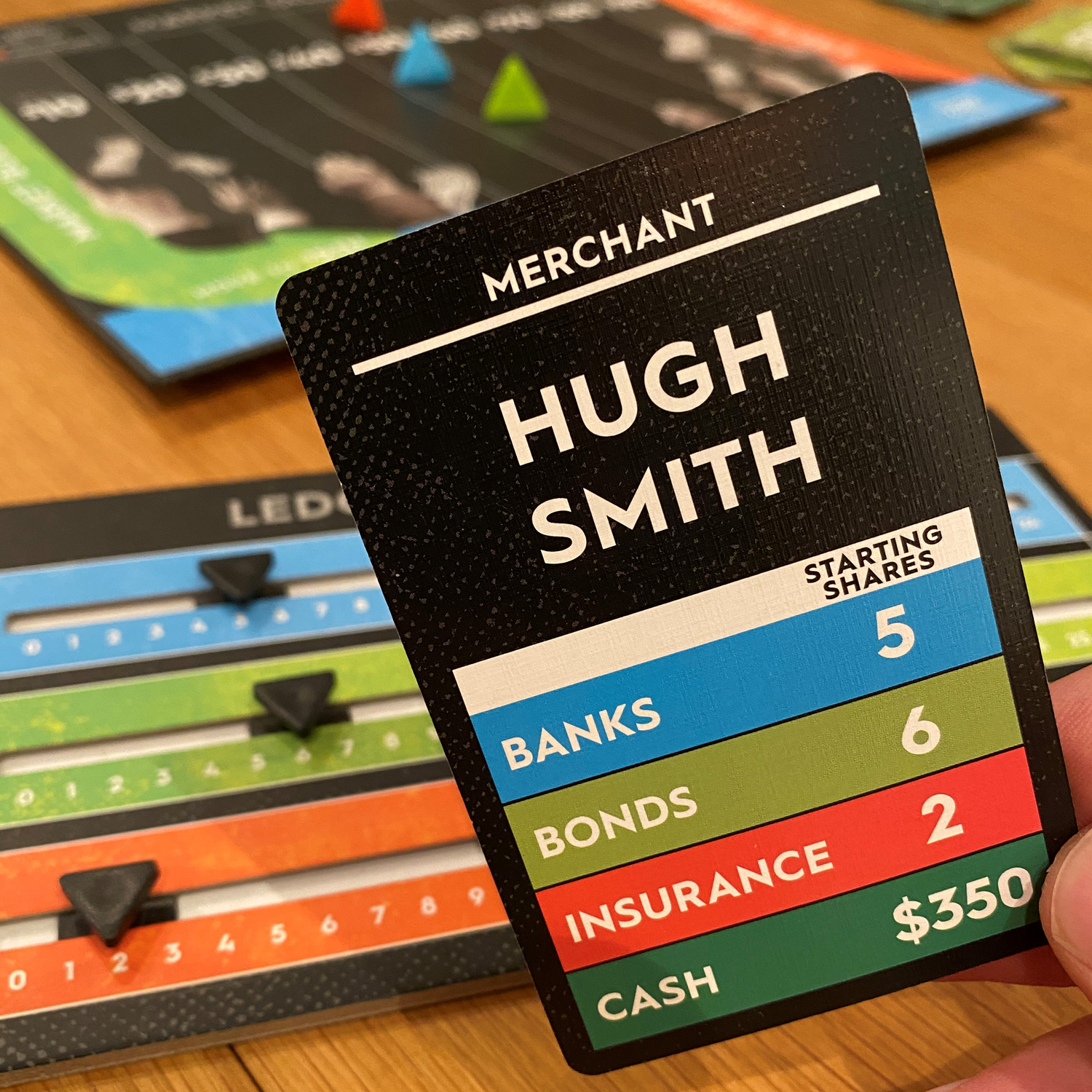 Selling high and buying low is the key to success in the Exchange. Having the highest net worth is the name of the game. However, the shrewd player will be fully prepared to predict the external market forces and become aware if the market bubble for a commodity is going to pop!

The game lasts over five rounds and seats 3-6 wannabe traders. At the start of the game each player will be dealt two characters. These are named after the founders. Choosing one dictates how many of each commodity and how much cash you start with. Commodities are tracked on individual ledger boards which need to be adjusted at the end of each of the five rounds.

There are three commodities available for trading: Banks, Bonds and Insurance. The current price of these is displayed on a central Market Value Board. During each round players will have to make three decisions called phases. First, they have to choose what commodity to trade in. Secondly, how much of that commodity they are willing to buy or sell. The third phase players choose how they will affect the market value for the commodity, by increasing any of the three by plus or minus $10.

After these phases, players read out a Market Force card that usually affects the market. Players can pay $50 to see the card before making their decision. After the first round the player with the most money becomes the lobbyist giving them an extra chance to affect the value of a commodity, like phase 3.

Once players have revealed their selection, the market value board is adjusted and players buy or sell their commodities at the new price. After 5 rounds the market closes and there is one final swathe of market adjustment to value the final shares on players’ ledger boards. 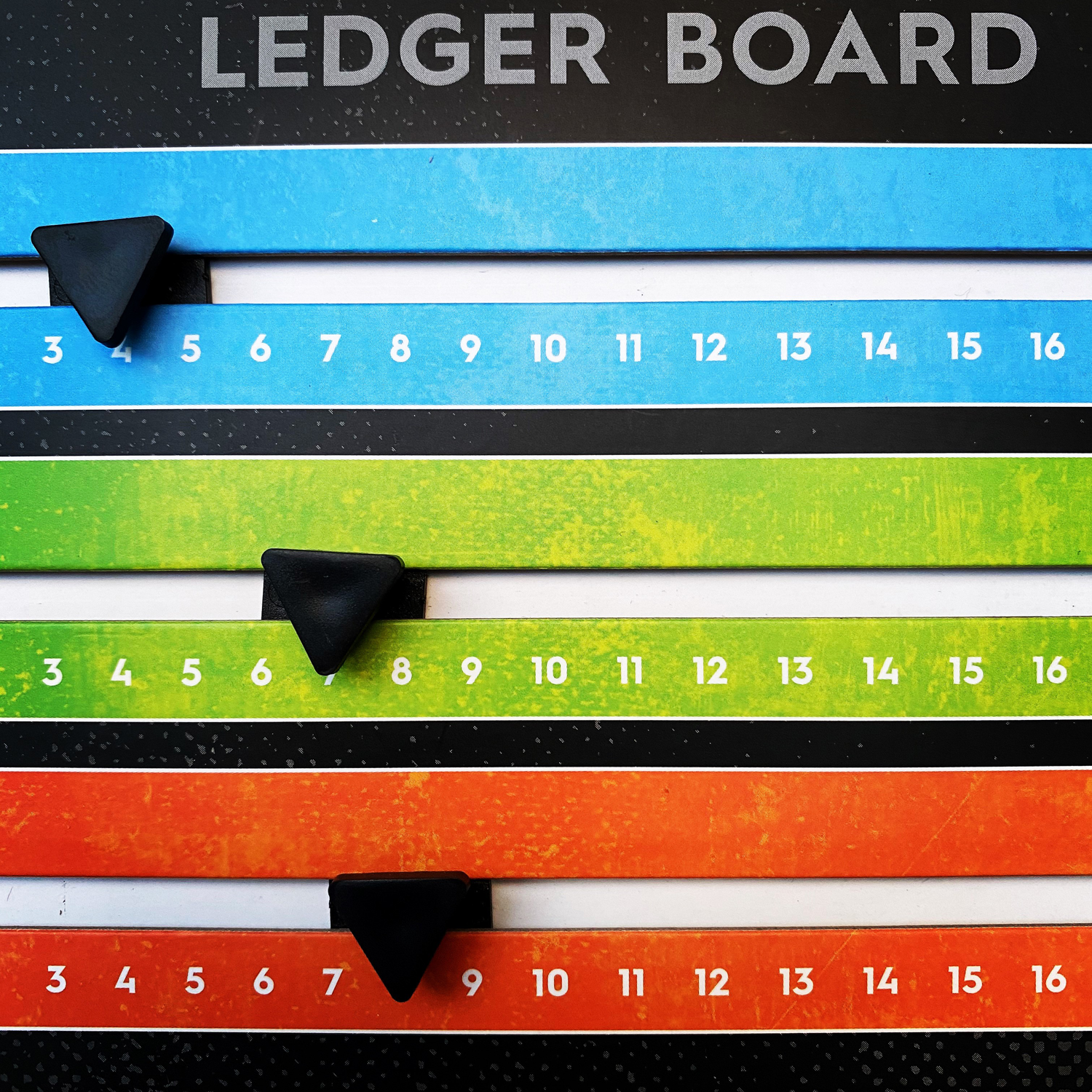 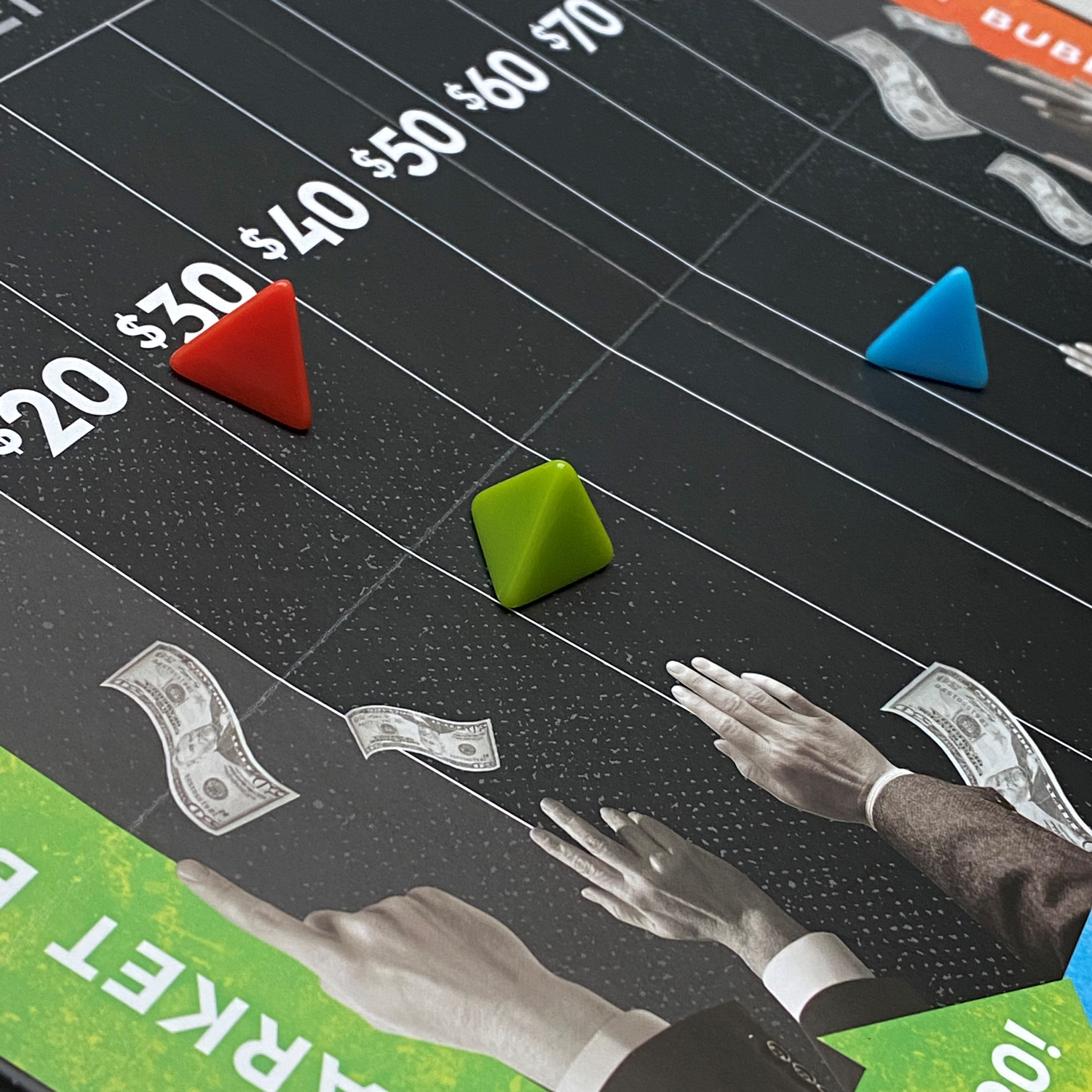 Exchange is really easy to pick up and learn. I taught it to my 9 year old son and it was only interpreting the market forces cards that he struggled with on his first play. The central playing board should have in big, bold letters ‘Sell High and Buy Low’ as a reminder to all players the basis of the game. For some reason new players will always affect the market incorrectly at least once in their first game. This is usually followed by some expletives and the inevitable line “I didn’t mean to do that!”

Rookie mistakes and basic trading errors aside, this never ramps up to the fervour of a real life trading floor. The pace is quick though and the five rounds pass very quickly.

Paying to see the market forces is a definite advantage, but the light strategy of the game is more embedded in watching your opponents. Gauging what they are likely to do with the money and commodities that they already have makes you feel like you can make educated assumptions. That said, it is not without its hiccups. You will find yourself paying considerably more or receiving considerably less for commodities more often than you would like. The game really punishes you if you cannot afford your purchases.

It is the unpredictability of the swing in commodity values that gives this game a good dose of fun. You will be cursing other players more often than you will be giving yourself a pat on the back for the perfect trade! But that is the random amusement the game offers.

There is only so much you can do in terms of art with a dry subject like playing the stock market. Exchange uses a palette of orange, green and blue with black to create a stylish looking game. The board is fully functional and the pyramidal tokens denoting the current value of a commodity are strangely satisfying.

The personal ledger boards are brilliant with their sliding markers. They have proven rigid enough to last and not lose your current stock level, but with a good ease of movement when need be. The other cards are clear and easy to read and echo where necessary the three colours of the game.

The cards have little wallets to present your phase choices in. These are reminiscent of the little packets you get ‘After Eight’ chocolates in. You will be pleased to hear they are less flimsy and bigger than these though and do the job nicely.

The rulebook ultimately tells you everything you need to know but could be streamlined a little.

Finally there is the spondoolies. Available in $10, £50 and $100 denominations. This is my only real gripe. There just isn’t enough money included in the game. In every game I have played when working out the final scores we have run out of money, reaching for a pen and pad to work out what we are owed. More $100 or even a handful of $500 would’ve easily solved this and it’s a shame that one of the world’s biggest card companies scrimped on this component. 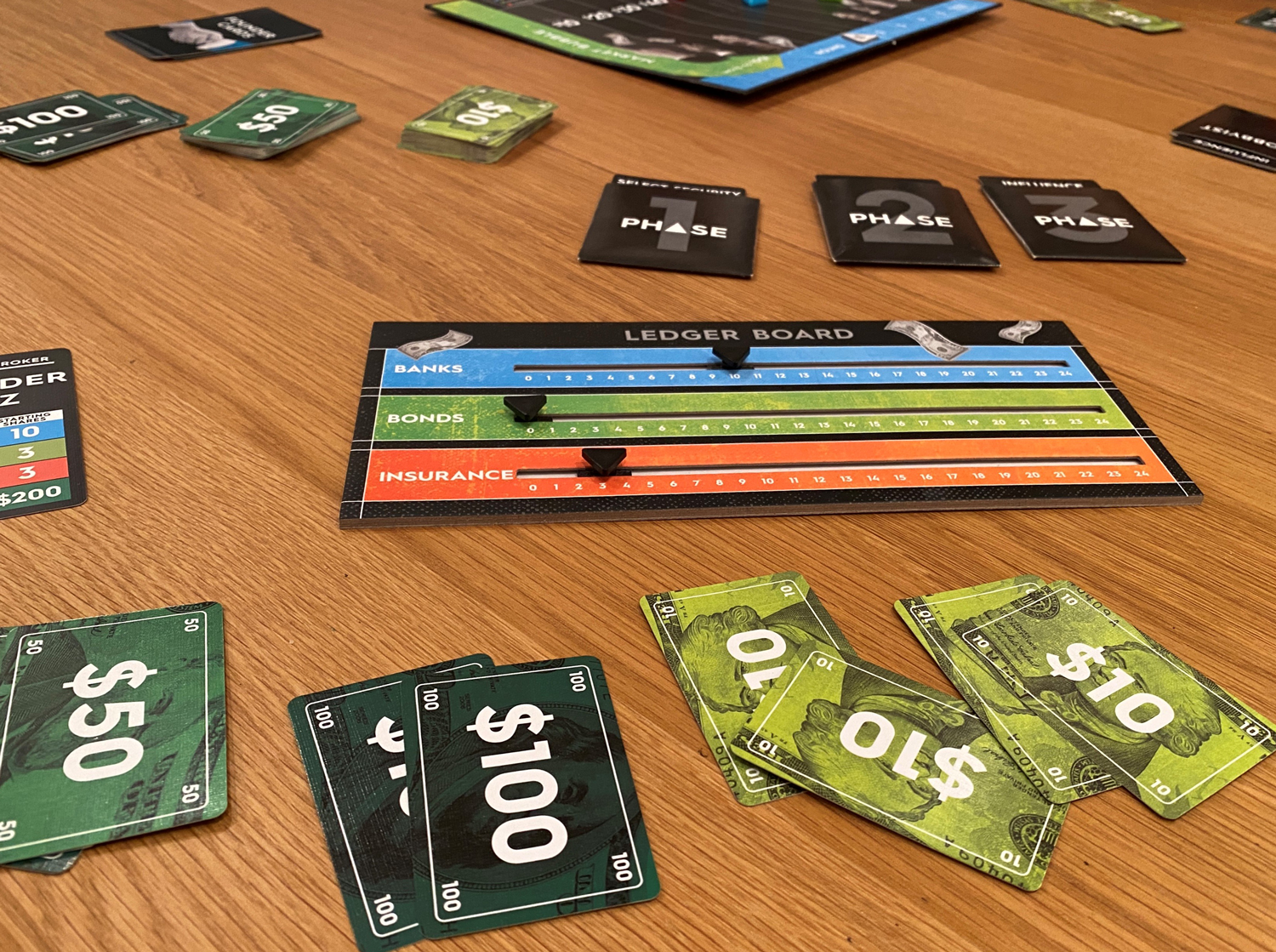 Whether Exchange truly delivers on the market trading theme is up for debate. For me it has enough essence of the stock market that it can be forgiven for the slightly slower pace. If you are looking for the frenzied experience of trading you would perhaps be better off with the card game Pit. The lighter play really does make it accessible for all. However, the game is quick to play with very little downtime as turns are taken in unison.

The volatile and shifting nature of the market board makes it all the more fun. This part of the game reminds me of Colt Express, particularly that moment when your forward planning goes out the window because of another players’ short-sighted and selfish moves! Although it is unpredictable, the luck is mitigated by studying your opponents and considering their next moves, while deciding on your own. Exchange is a really good option for that quick game to play after dinner with non-board gaming friends!

I am pleased I own Exchange, but sadly it will probably not get to the table as often as some others on the shelf. Whenever it does venture onto the table though, I know it will be an enjoyable experience.

There is plenty of entertainment waiting in the box of Exchange. It is quick to learn, has some light strategy and engages all players at the same time. The chaotic unpredictability really adds to the game and theme.

If you already ownExchange and enjoy it, or are looking for other inspiration, you might also like these similar games: