Advert: we were gifted this game by the designer, this has not affected our opinion.

My blogger buddy and fellow reviewer Jim, of What Board Game fame, has been applying pear pressure for me to write my preview of the card game Funki Fruit, as it is on Kickstarter now. The thing is, I received a copy of Funki Fruits quite late, almost at the start of their Kickstarter campaign. Plum-believably, I have been berry busy frantically playtesting the game to share my thoughts with you. I’ve oranged everything and I hope you ap-peach-iate my hard work. I have afterall, gone to grape lengths for you.

So, do I love the game from my head tomato? Is it one in a melon? The pick of the bunch? Well, I will tell you more in my preview so let’s cherry on… 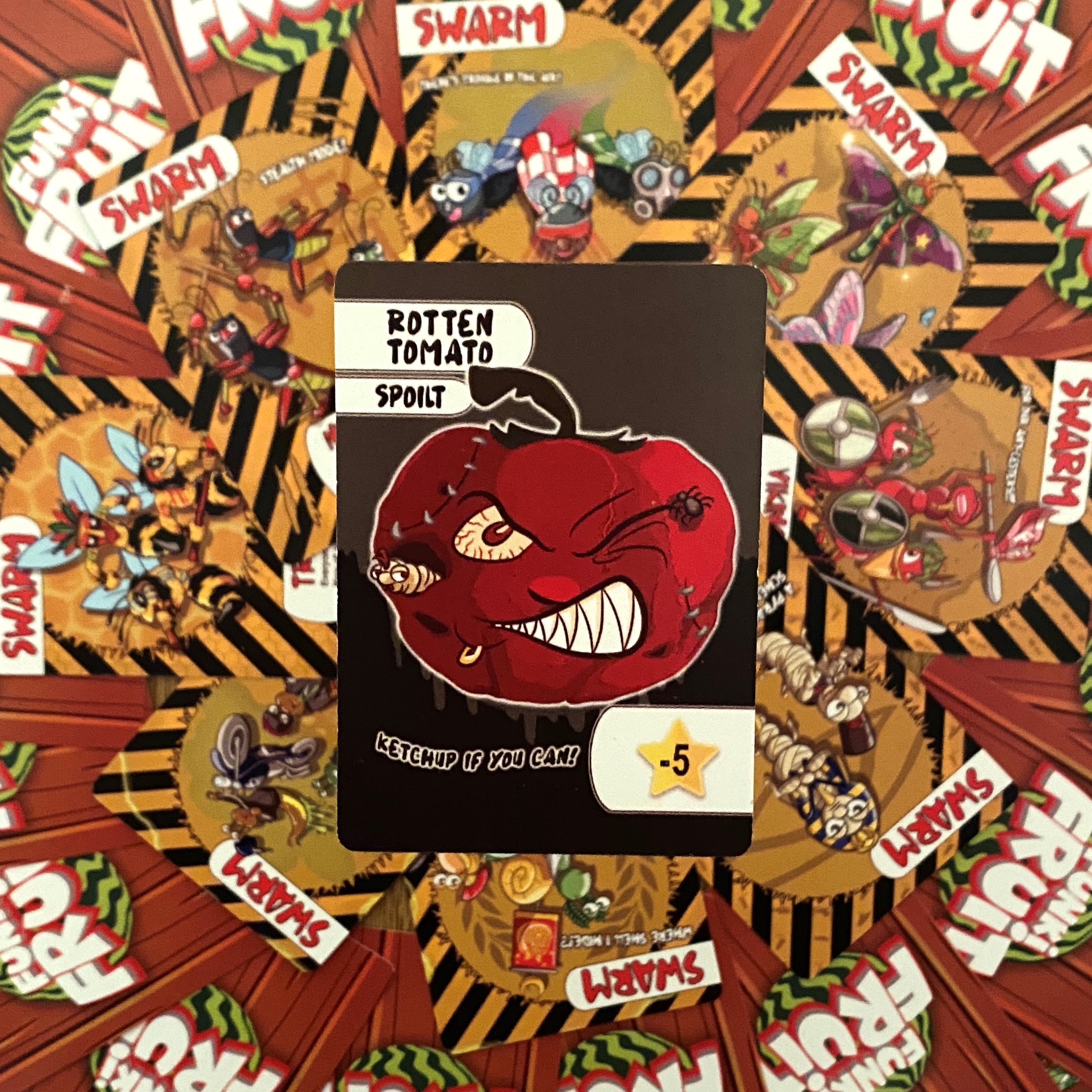 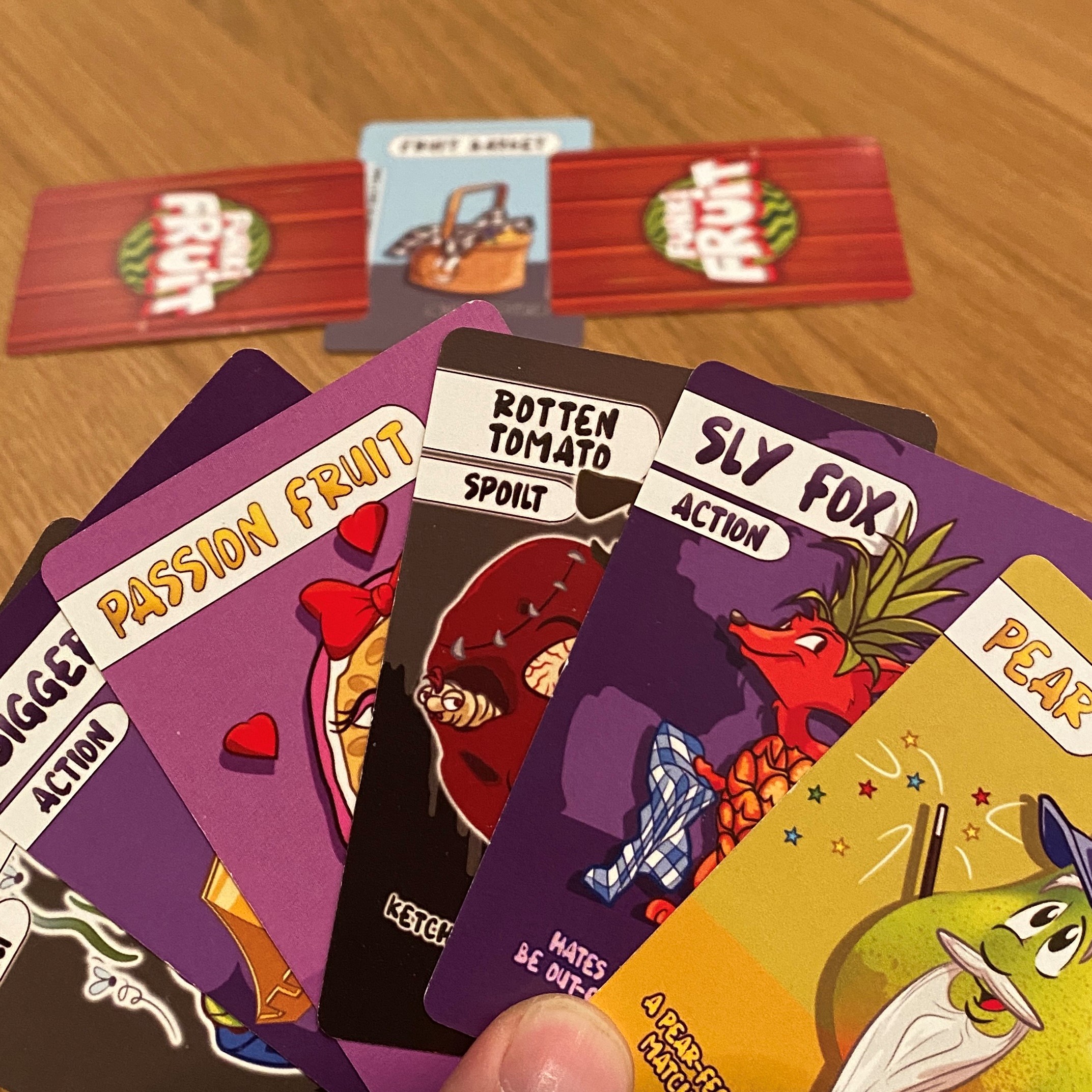 A hand of cards
from Funki Fruit

Puns and play on words aside, Funki Fruits is a card game where 2-5 players aim to collect sets of fruit. It is for ages 10 plus, but my 9 year old beat us all fair and square on his first play! Each type of fruit scores differently and there are different menus for the various player counts. Removing and adding these from the deck each time is a little bit of a faff in my preview copy, but I have been assured that this has been addressed with iconography for the Kickstarter version.

Learning to play is easy, not least because of a clever A, B, C, D, turn phase. A is to play Action cards. These will generally hinder an opponent or benefit you in some way. B is for Basket where you can store or swap up to two cards, making them hopefully harder to steal. C is draw Cards, the first is from the draw deck which you show to all players, the second can be from either of the two discard piles or a blind draw from the main deck. D is for Discard, and this is what you will have to do if you have over 10 cards in your hand at the end of your go.

The rules are great and even have a codex of cards for clarification, not that you will need it, as it is all pretty straight forward.

The game lasts almost an entire deck but finishes when the fourth Swarm card appears. There are eight swarm cards in the game, all but one are mean! In fact, throughout the game there is plenty of ‘take that’ opportunities, but as long as you don’t always target the same player, you will accept it as part of the fun of the game.

At the end, you score the cards remaining in your hand and the person with the most points is declared the winner. At this point I would personally like a score pad, which may well be a stretch goal… we will collectively have to back it to find out! 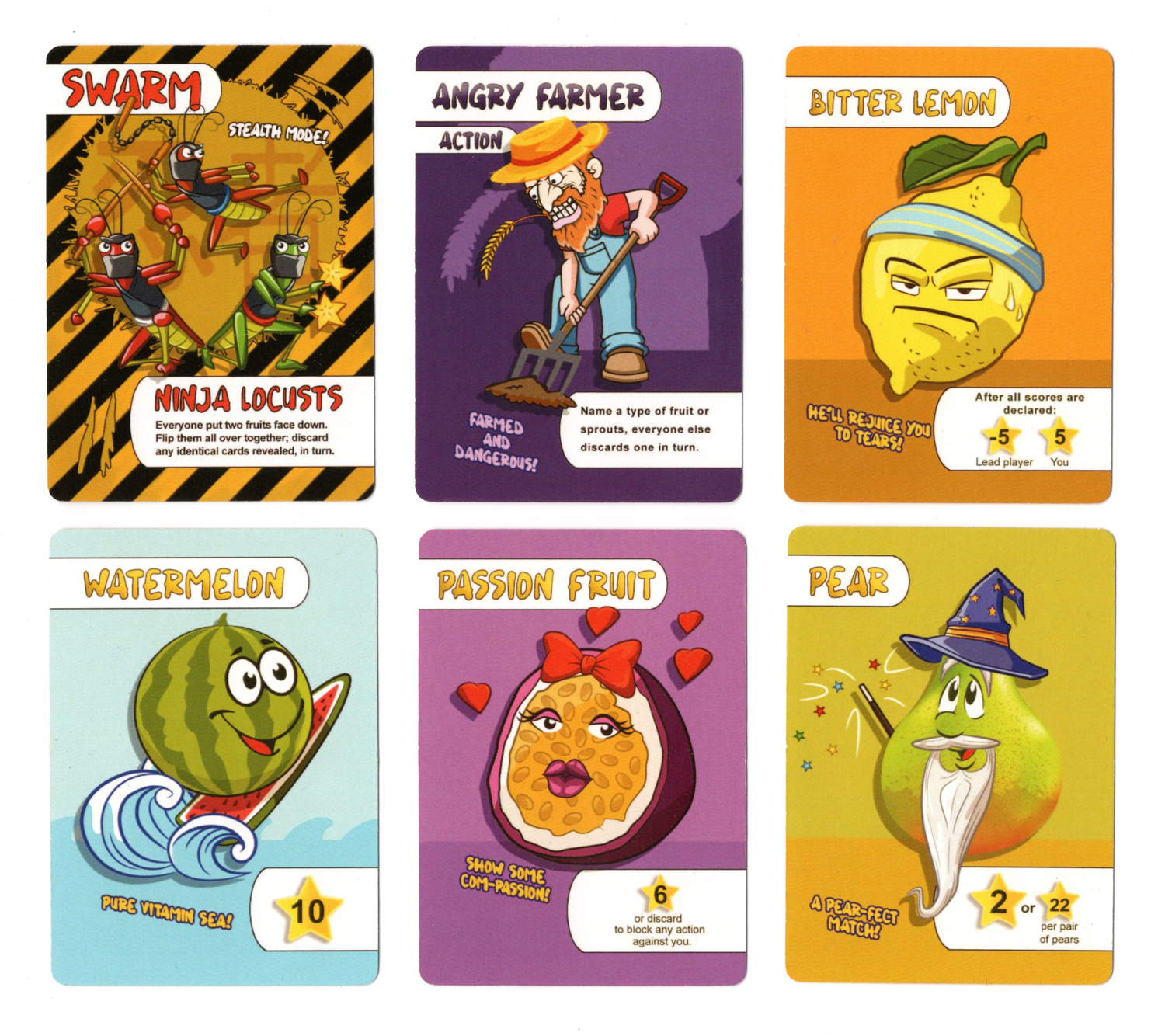 A selection of cards
from Funki Fruit card game
Check out the puns!

There is a lot to like about this game. The anthropomorphic fruit illustrations coupled with amusing puns make the cards great fun to have in your hand. In fact, the puns are worthy of a Board Game Review introduction – perhaps that isn’t saying much!

Comparisons could be drawn with Sushi Go Party and Point Salad, and that is no bad thing, there is certainly enough that is different in Funki Fruit to make it worth backing. The abundant selection of cards offer plenty of variation on which set to collect. The strategy of trying to work out what other people are collecting, and therefore how to nobble them, is a terrific part of the game. The random nature of some of the action cards and swarm cards gives this game lots of replay-ability too. It certainly feels good value at £15 (+P&P).

Our family have really enjoyed playing Funki Fruit and we certainly think you will too. This isn’t a gamble on Kickstarter in terms of gameplay, there is an ample amount of entertainment in this small box. The Funki Fruit Kickstarter campaign is ending in a fortnight so you better back it quick, it’s halfway through the campaign and also halfway towards its target – but it needs more backers as it certainly deserves to be funded!

The Tabletop Find It Book Preview