Advert: this game was gifted by Games by Bicycle, this has not affected our review.

The Bicycle brand has been known to me for some time, having performed the odd magic trick, I know Bicycle is the go-to brand for playing cards. In fact they have been the bestselling playing card brand in the world for more than 130 years! Now what I didn’t know was that they have fairly recently ventured into a range of family games. The latest offering was released on the 16th June, called The Alpha.

Board Game Review were lucky enough to be among the first to play this game in the UK and so we can offer you this early review of this light strategy family game. 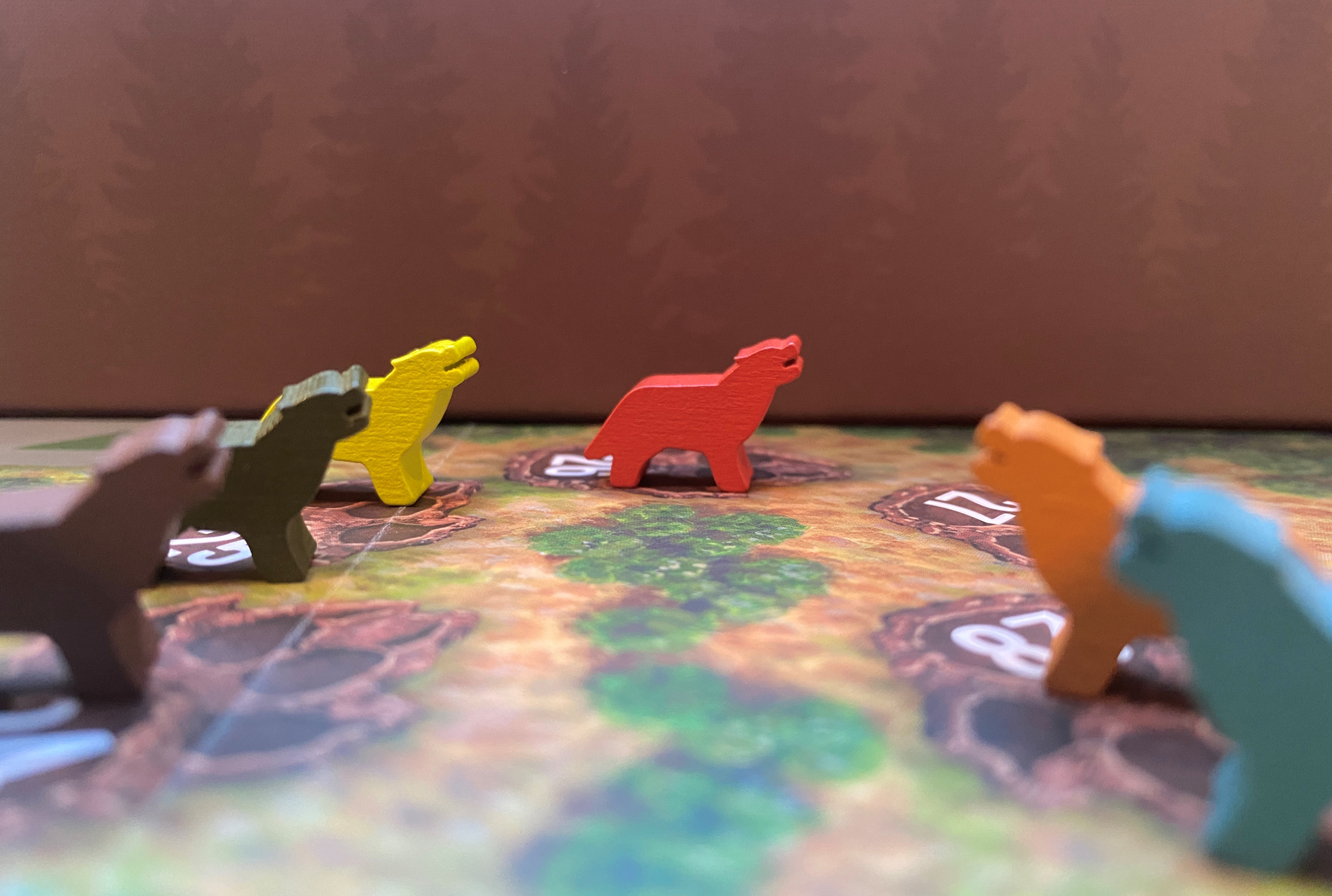 The Alpha sees players control a pack of wolves on the hunt for food, aiming to become the dominant pack. To do this the 3-6 players must decide on which prey to hunt. Some prey is easier to catch, others are more difficult, but the reward for this risk can be far greater.

To establish dominance in an area players take turns placing their player tokens on a target animal. This prey ranges from a fish to a bison. The player with the most tokens on a targeted animal gets to roll a dice to resolve how successful the hunt is. If tokens are equal, or the dice rolled causes a conflict, players use the prisoner’s dilemma mechanic to choose whether to fight or share the spoils of the hunt. The successful players get to move their scorer along the food track on the board. The leading player becomes the Alpha for the next round. Play continues like this over five rounds. 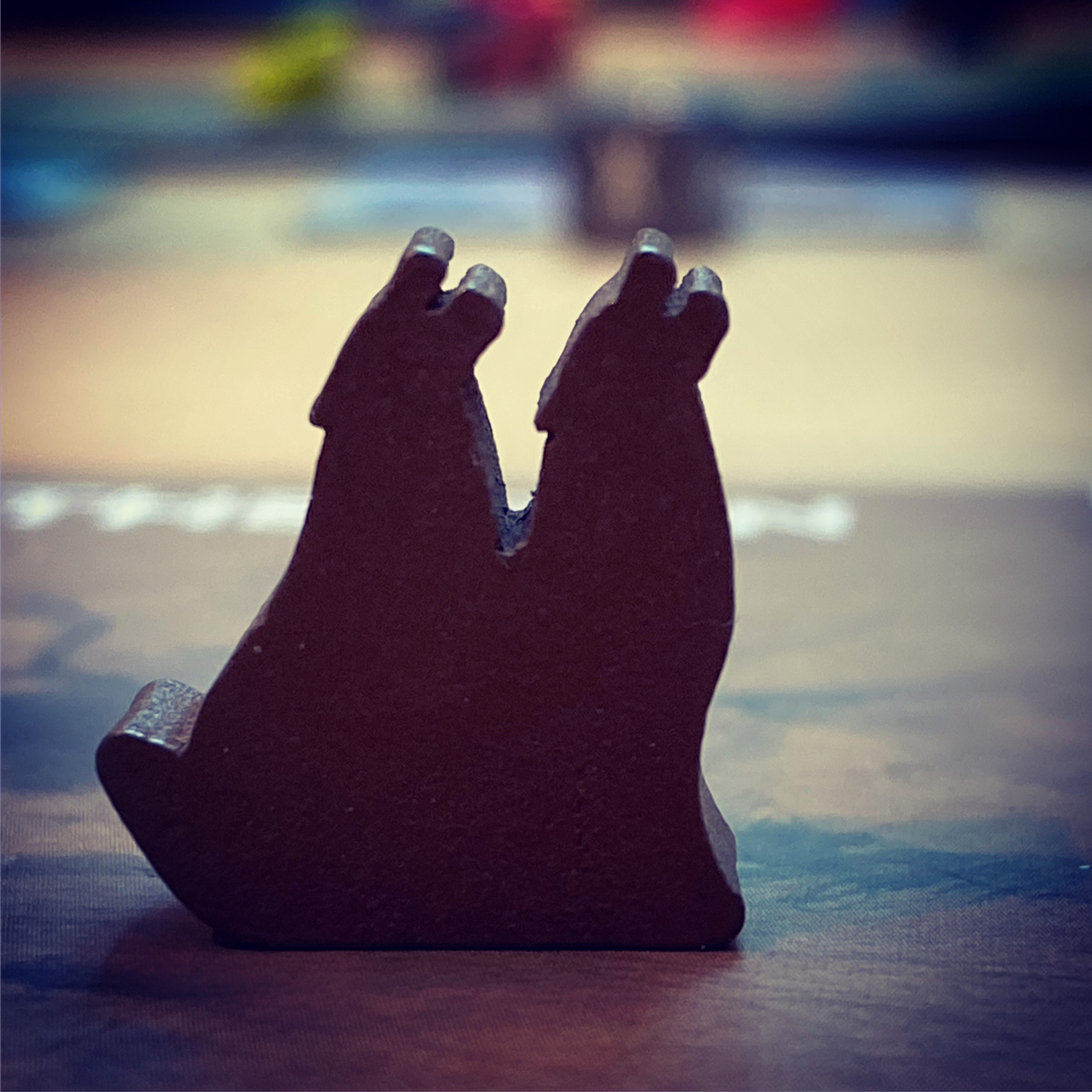 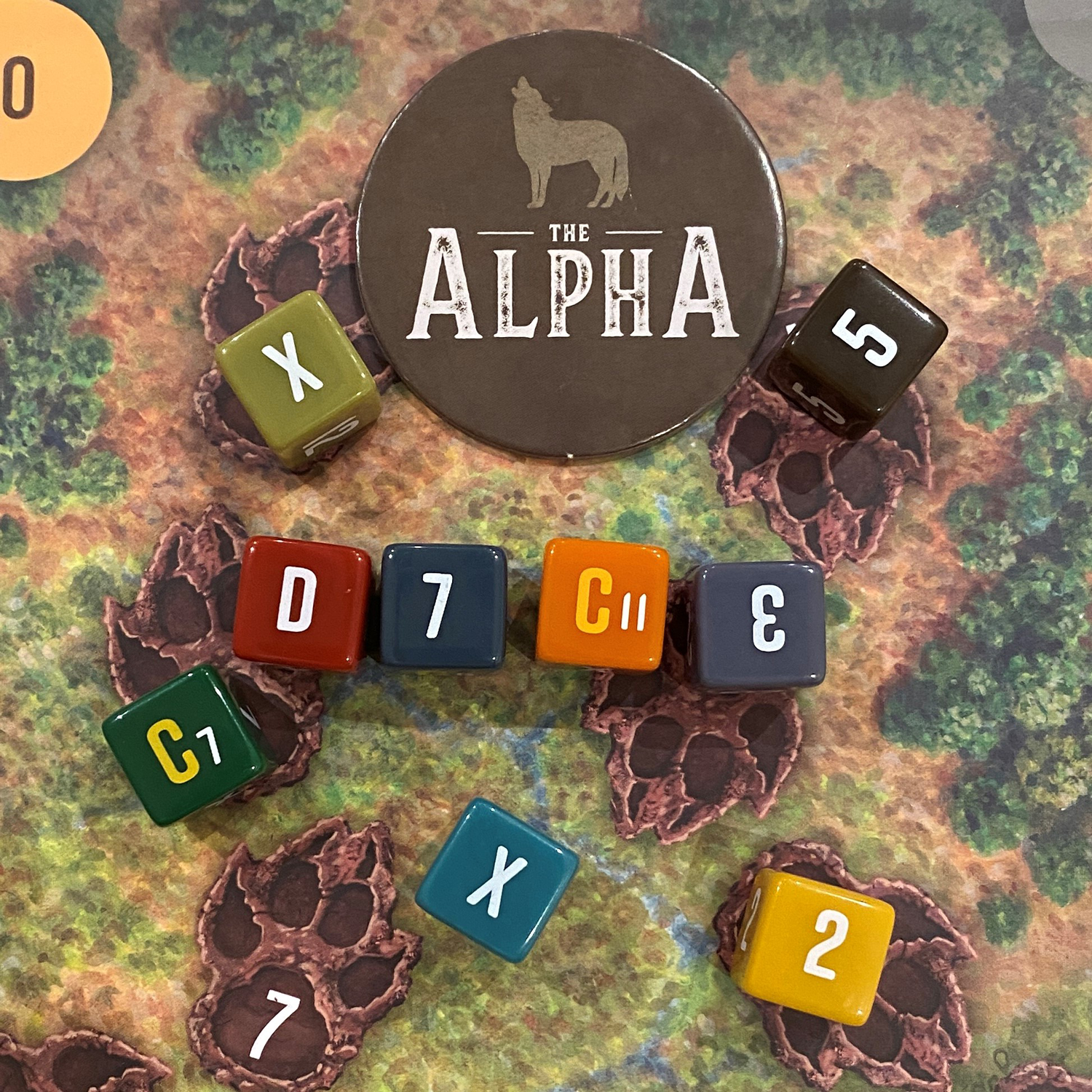 The Alpha is a really easy game to pick up. There is a huge amount of luck, as there is with any game that uses dice as resolution. This luck however is cleverly disguised like a wolf in sheep’s clothing, whereby you feel like you are making more strategic decisions than perhaps you actually are.

The luck in The Alpha does make it more inclusive. Its relatively quick play time (once everyone knows how to play) is a bonus for non-gamers and families. It also offers something different in terms of a filler or wind down game for the end of a game night. It really is a breeze to play and although the box suggests ten plus, younger players will be absolutely fine and dandy playing along. My 5 year old can play and although he may not win, he can really scupper other players and as a result generally doesn’t come last either.

That isn’t to say there is no strategy. You have to choose where to divert your attention and which battles are worth trying to dominate. Another quandary is when and where to use your double wolf token. You also need to be aware going into the deep forest costs you a negative place on the score board and the risk of getting nothing from that prey also needs to be considered. If you gain the lead, you have to work out how you will maintain it. Do you flex your alpha muscles and keep gambling, or play it safer. The livestock hunt seems to be the most risky as rolling the dice for this has a 50% chance of your wolf dying and being removed from the game, but rolling that dice is quite exciting as a result!

The conflict resolution adds a great extra dimension to the game. Choosing to fight or share adds an opportunity to bluff. If three or more are battling for dominance it gets particularly tasty. You see, if everyone decides to share there is peace and harmony and you all go off with your respective scraps. If one fights and the others all share, the hunt is stolen by the aggressive wolf. If more than two players fight, their wolves get injured and need to heal limiting placement on their next turn, any players that chose to share then get the scraps to themselves. The so-called prisoner’s dilemma is the best part of the game for me and necessary to give the game a bit of extra bite. 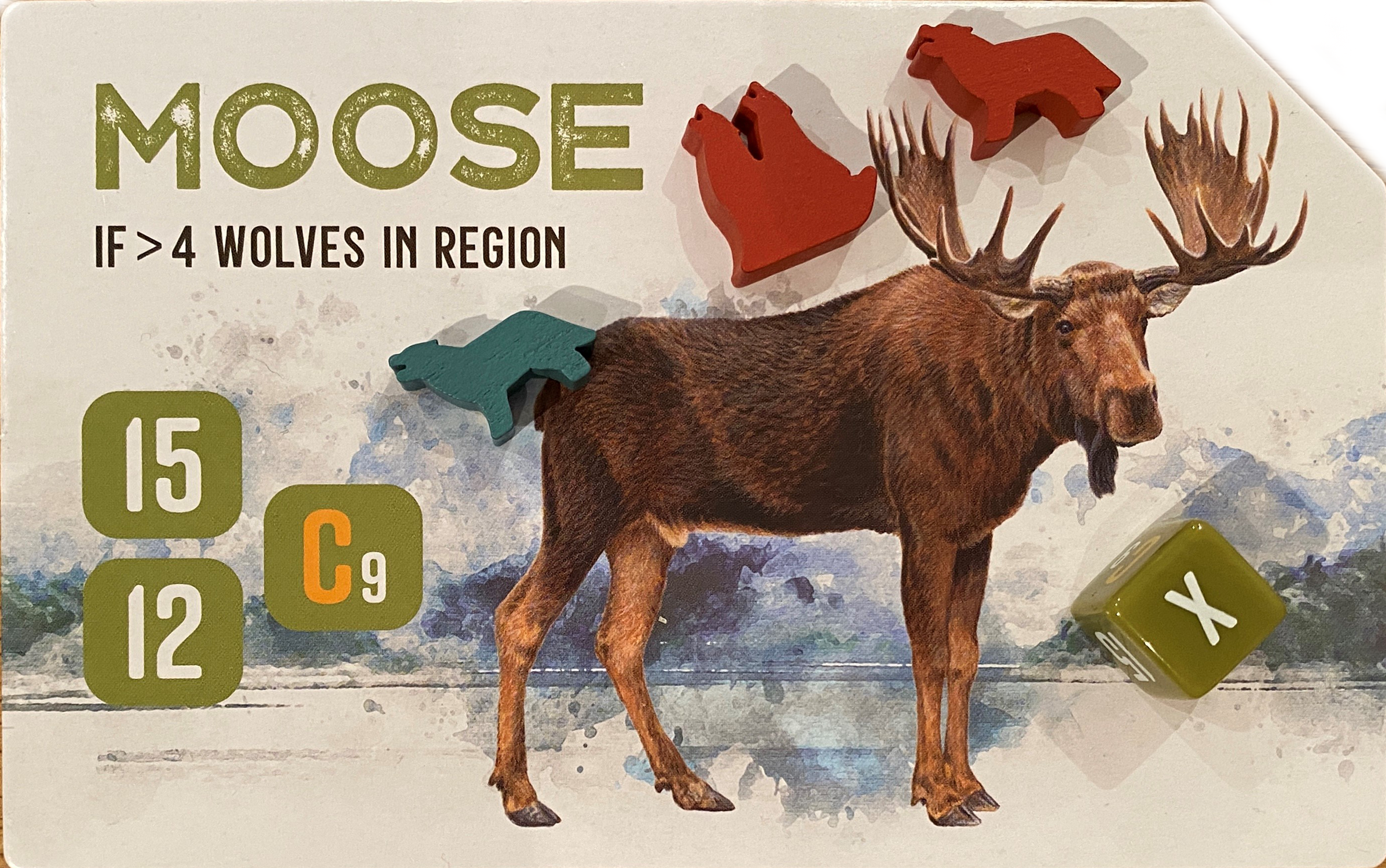 The rule book tries to overcomplicate the game. Too much information isn’t normally a bad thing, but it could be scaled down a bit. There are plenty of examples of how each phase works and plenty more around resolving conflicts, these will be handy when first learning the game.

The insert is nicely organised but vertical stackers will not be pleased. For a reason unbeknownst to me the designer chose to have the game board sit over only half the components, so three of the compartments for wolves is uncovered leaving them to rattle around inside the box. For me this is an obvious design flaw and one that looks to be easily fixable had they thought of it.

The Alpha is nicely illustrated by a park ranger and has a lovely hand-painted appeal throughout. The score board or food tracker is great and nicely designed. All the components are good quality but the board, instructions and prey markers are all overshadowed by two other components…

The dice are fantastic and are in lovely tones of colour that match the artwork on the prey they represent. They aren’t oversized or particularly glitzy but their glossy colourful appearance gives them presence.

The other amazing component is the wolf tokens. These are offered in a lovely range of unusual colours too. I think they are brilliant looking and are a joy to play with. 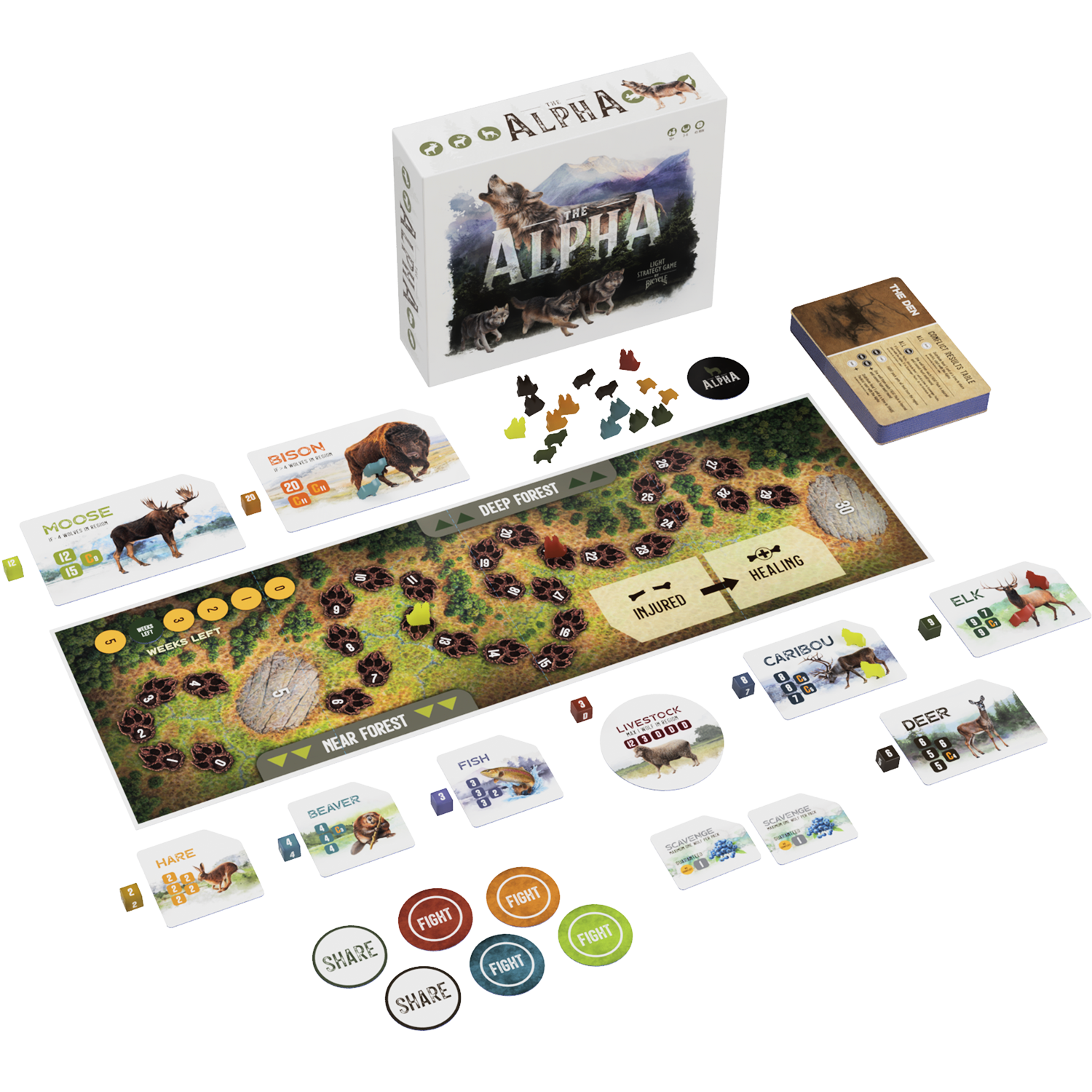 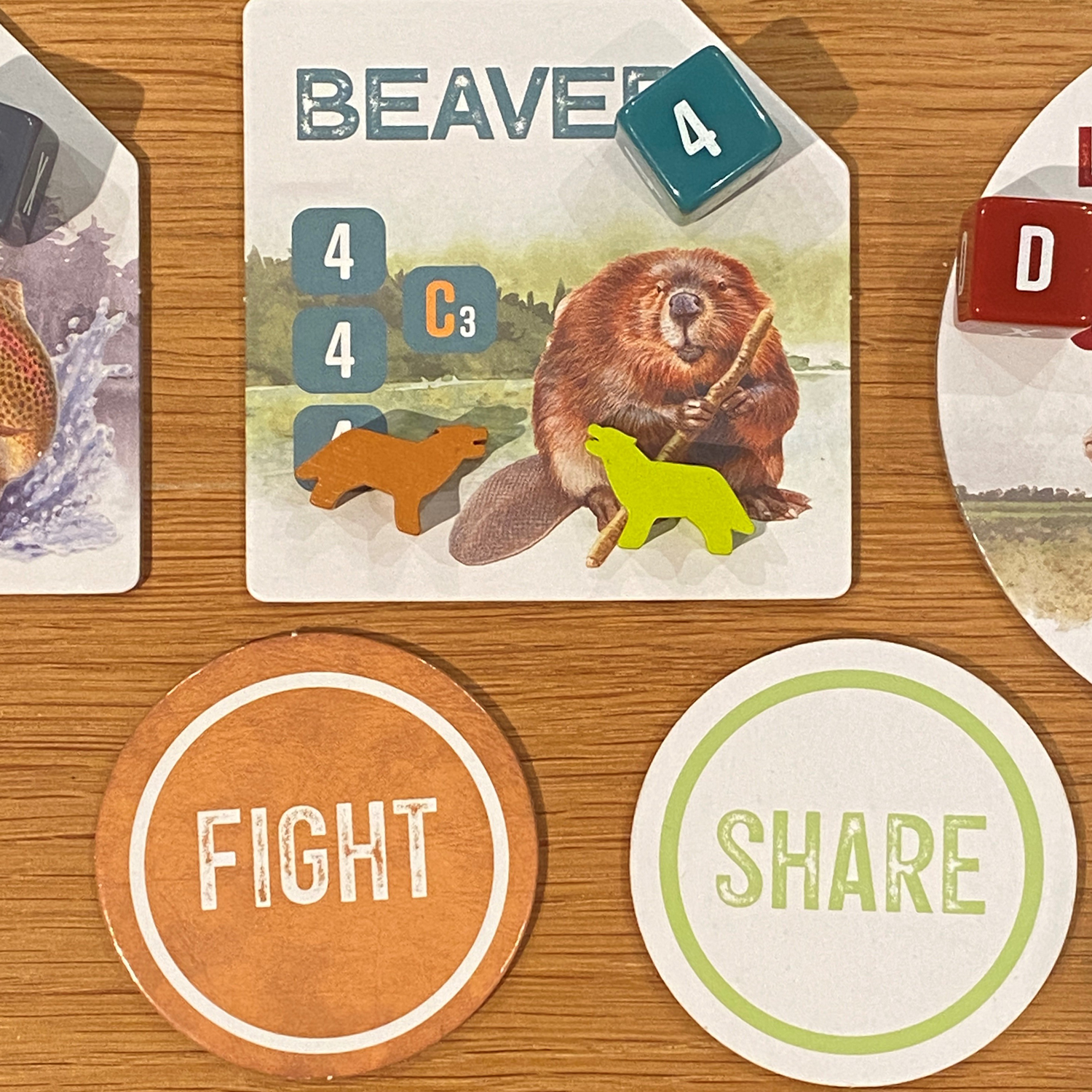 What my kids thought

I always like to check what my boys think, Max (5) said “I love it, the wolves are so cute – they are my favourite.” George (9) said he enjoys the fight and share part, and wishes there was more of it in the game.

While Harrison (12), who doesn’t normally like luck in games, said “I like the luck of the game, especially when other players have bad luck and roll x’s! Even though there is luck it feels like it is tactical luck.”

Without any prompting I feel like they have pretty much each captured a different aspect of the game that is good.

Final thoughts on The Alpha

I really like The Alpha. The components are very good quality and the gameplay feels quick and fun. There is some strategy, but analysis paralysis should be rare.

I understand more seasoned gamers might not like that it is a lighter game. For me, sometimes that is exactly what I want to play, especially when playing with younger cubs or after a heavier game. The Alpha fills that void quite nicely without being so light you don’t have to think at all. Because of the risk and reward balance of the prey and dice all players have a chance if they can roughly keep track of the leader.

The occasional moments of bluffing will not be for everyone but for me this is one of the best parts of the game.

The Alpha is unlikely to become your favourite game in your collection. If you buy it however, it will certainly be played enough to earn its place on the shelf.

Be sure to watch our unboxing video of The Alpha too!

There is a lot of things to like about The Alpha from Bicycle. The theme, components, gameplay, risk, rewards, bluffing and luck all make playing the game an absolute pleasure to play. For the family and entry level gamer market it is targeting it does a fantastic job of being both accessible and fun for all.

If you already own The Alpha and enjoy it, or are looking for other inspiration, you might also like these similar games: 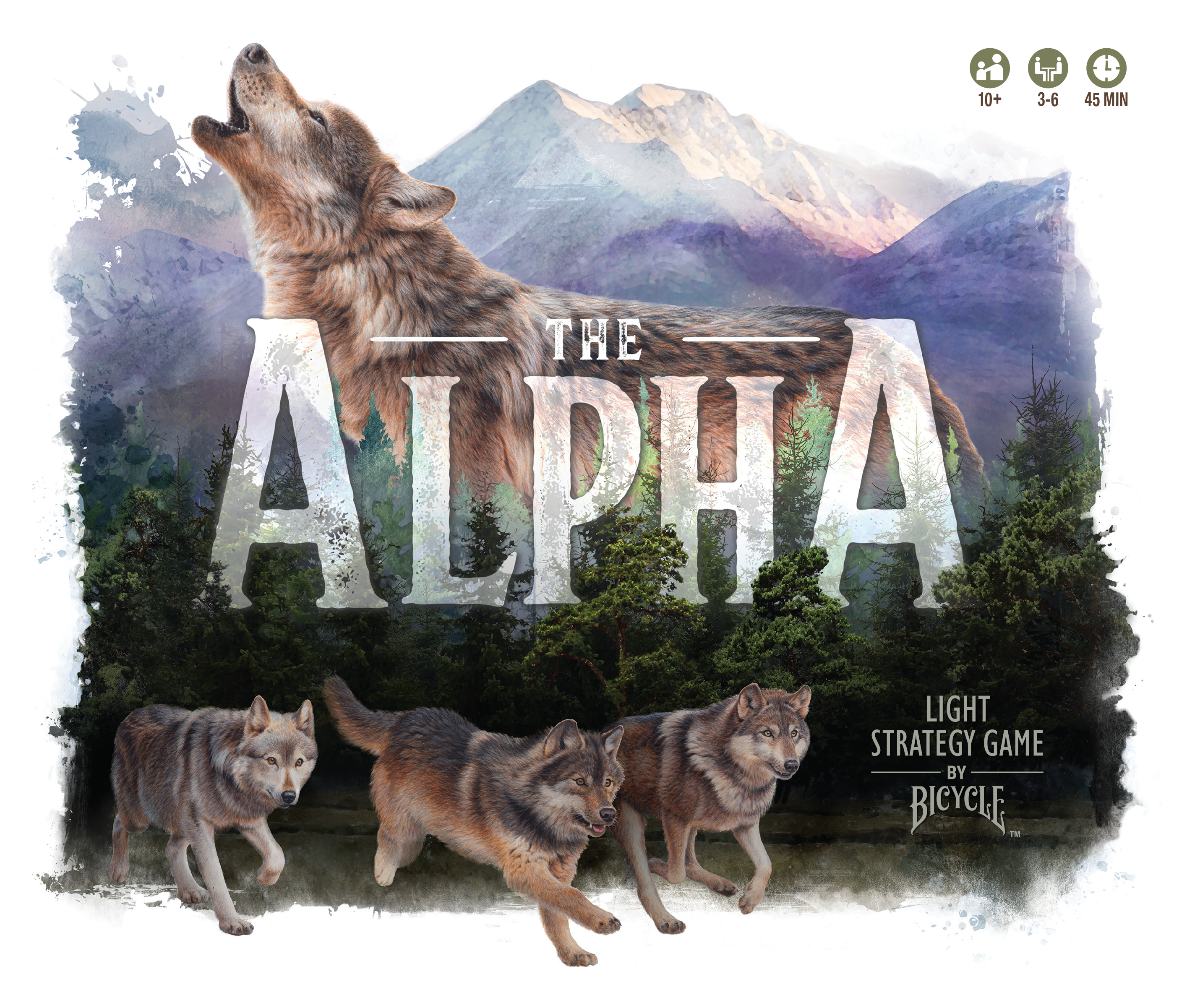 Buy You’ve Got Crabs
from Amazon