Advert: this game was gifted by Golden Ginty Games, this has not affected our opinion.

I grew up with a Miniature Schnauzer. Buster was brilliant. I could completely forgive his stinky farts from the special food he had to eat. I could also overlook his left over dinner being engrained in his little grey beard. He was a great pet, but old before his years and so he never really got into the habit of hiding and stealing things. Yet this is a trait I know many dogs have and it is the inspiration behind the card game Canine Kleptomaniacs. Created by the Jones family under the guise of ‘Golden Ginty Games’.

Their own family pet Amber (Ginty) is the inspiration behind the family game which was originally funded on Kickstarter. Amber can often be seen snaffling stuff on their Instagram page too. 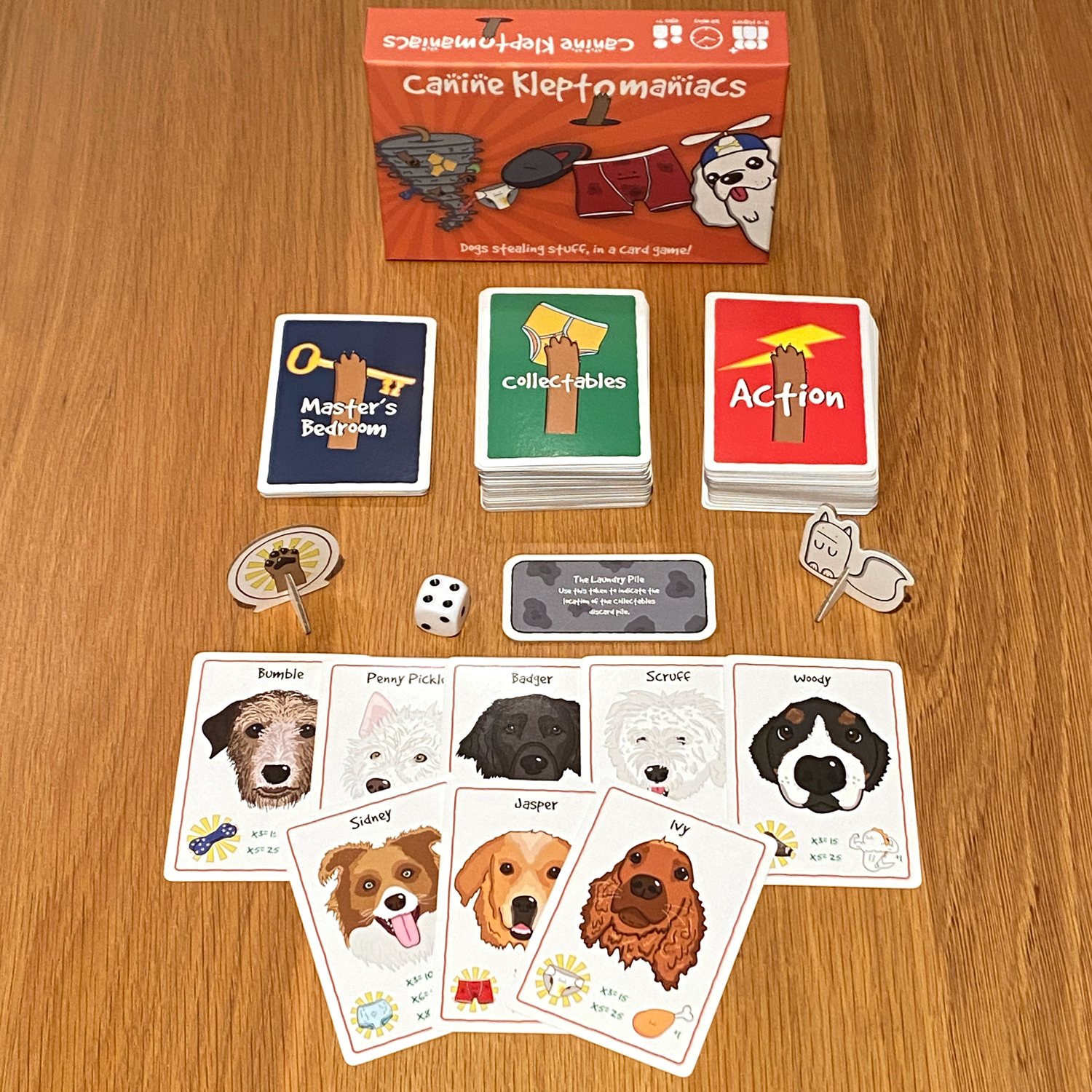 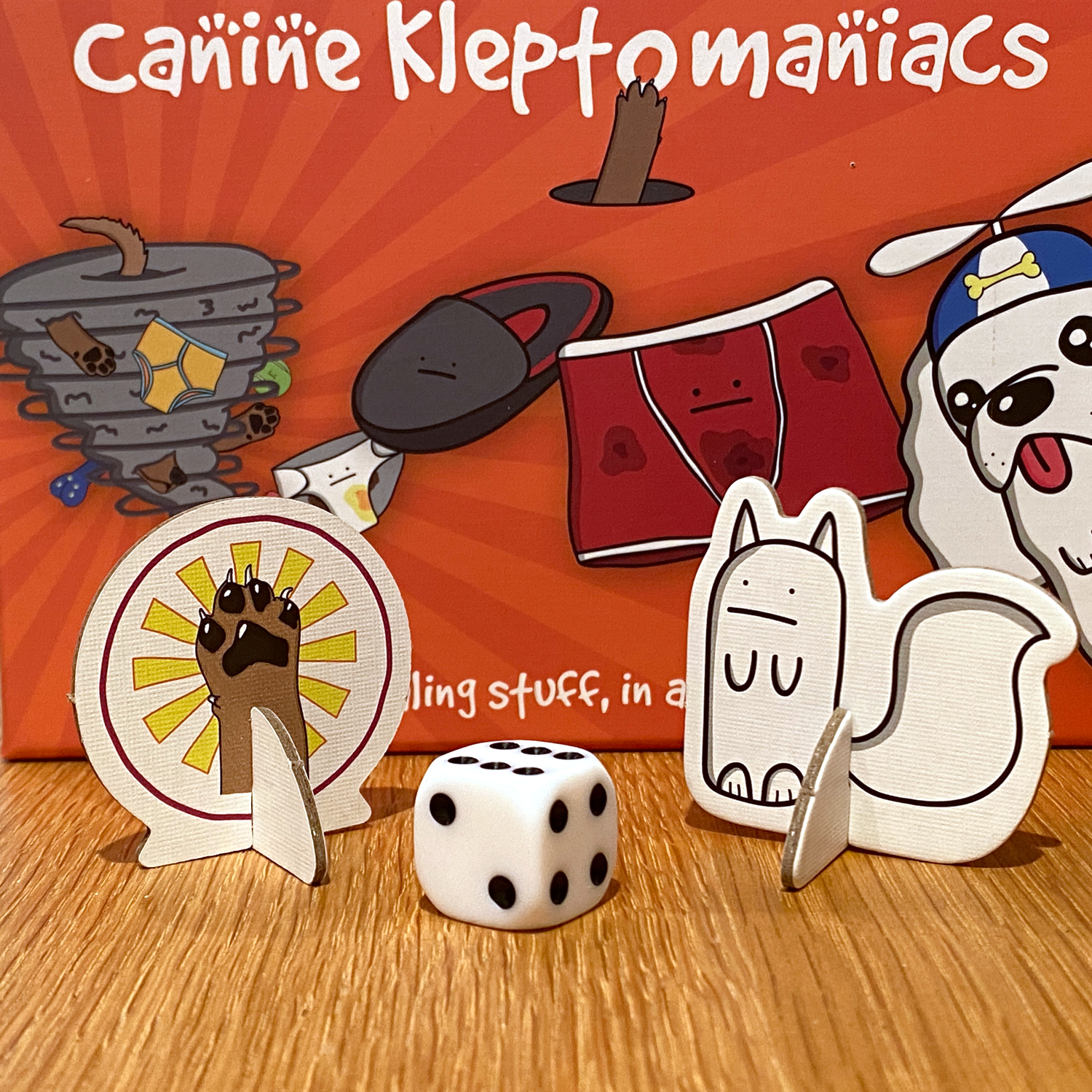 The game is quite easy to set up with three central draw decks. The three types of cards are Action, Collectables and Master’s Bedroom. A certain amount of ‘hiding places’ have to be shared out and inserted into the Action pile too. In addition to a Hiding Place, each player is assigned a dog character and five collectable cards as a starting hand.

On your turn, you will either take an Action card and follow its instructions, or lay or adjust the collectable cards in your hiding place. If hiding collectables these need to be squirreled away in sets of two or more cards of the same type.

The collectables all have different point values from a measly 5 points for the common Sweaty Boxers to the dizzy heights of 20 points for the rarer Golden Y Fronts. Your doggo character will also give you an end-of-game bonus for a certain type of collectable.

In Canine Kleptomaniacs there are 17 different Action cards all with different feats. Some of these give you a chance to enter the Master’s Bedroom, which unlocks further bonuses that can be advantageous for additional scoring.

Another aspect of the game is trading cards, which can be done at any time between players, as long as you don’t exceed ten cards in your hand.

Scoring happens at the end of the game and only cards that have been placed in Hiding Places count. To these points are added the special collectables and the Master Bedroom Cards, including any Doggo card bonuses. The player with the most points wins the game. 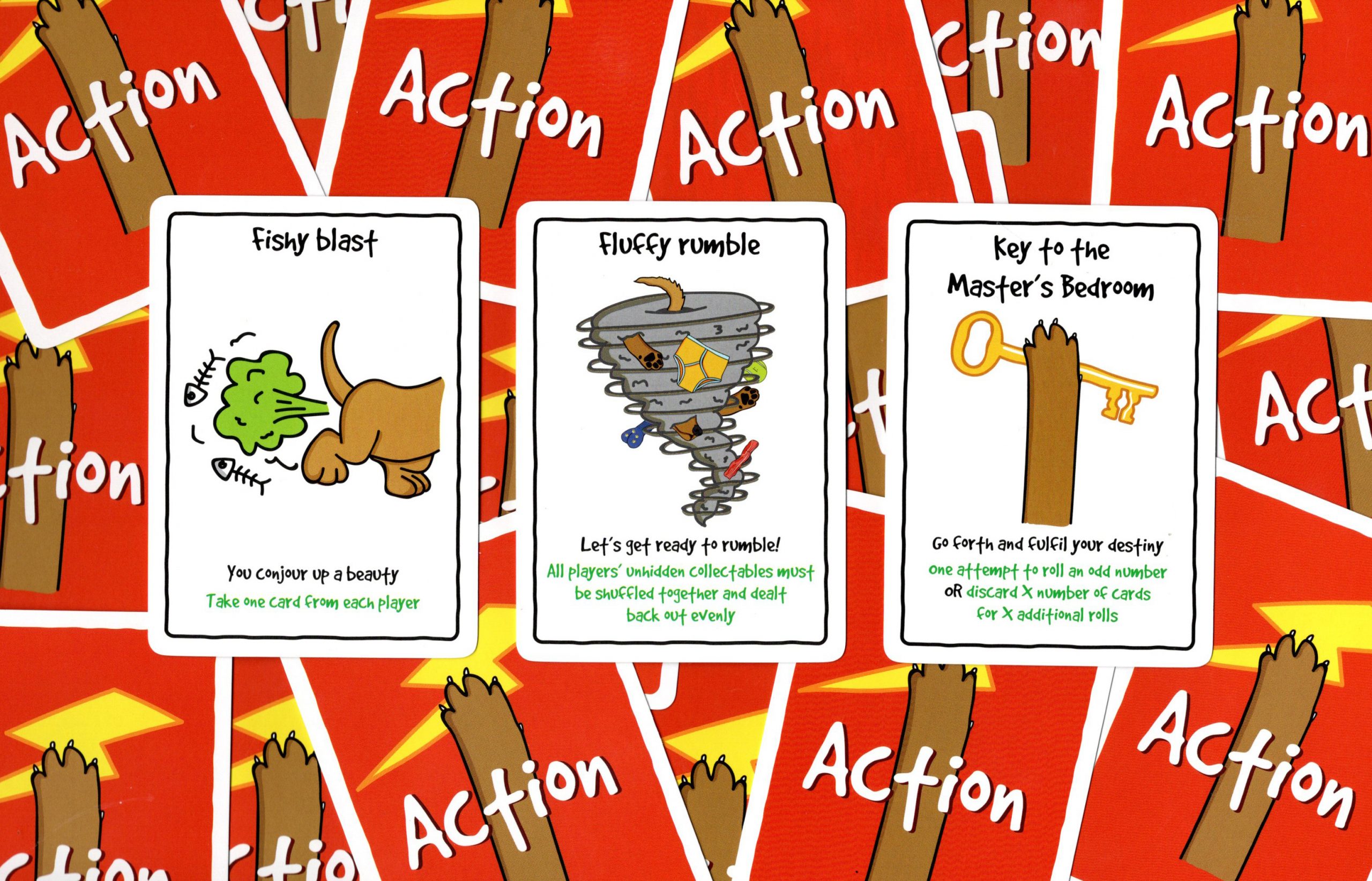 It took a few games to really settle into this game. The Action cards are good fun and riddled with doggy humour with a nice mix of stealing from other players and bonuses for yourself. There are a lot of them and as a result I found myself often reaching for clarification in the rules. Once you have got your head around the variety, it is a relatively easy game to teach. However, if you don’t play it for a while you will be reaching for the rules again.

Play does work its way around the table quite quickly and the limited options as to what you can do does aid this. Some down time does occur on higher player counts.

Within the game there is even a mini game of Plundering Pooch, like rock, paper, scissors for those who draw a certain card first.

There is a little bit of ‘take that’ in the game but stealing other people’s cards is integral. It seems there always is a ‘right person’ you should try and steal from so it rarely feels vindictive.

Although it doesn’t necessarily feel it, the game is quite heavily luck based and there isn’t an awful lot you can do to mitigate it other than hope for some successful trades. If you go on an unfortunate run of cards you can be handicapped quite quickly. The skill comes in when you are deciding how and what cards to hide.

I think the age of 7+ could be a bit low for some as there is a bit of reading on the cards. The quantity of different ones, also makes it difficult to memorise what each card does for the younger player.

For those that love the game, there is an Expansion Pack called ‘Covert Ops’ due out soon.

The rulebook of Canine Kleptomaniac is very good with excellent card explanations. However, there are a few key points lacking from the first edition I received. Mainly around the Master’s Bedroom bonuses and the additional Squirrel standee. The latter’s rule is only on the punchboard it comes with so don’t throw it away! The designer has addressed this in the second printing and published further clarifications on their website so it can be largely forgiven.

The two standees are nice. I learnt the squirrel was the first illustration created for the game and was originally drawn by the designer’s son. All the art has its own distinctive style, some of it’s a bit grim in theme, like ‘Li’l Jimmy’s nappy’, but most people will be amused rather than appalled. I love how all the collectables have a face on that gives them a little character. 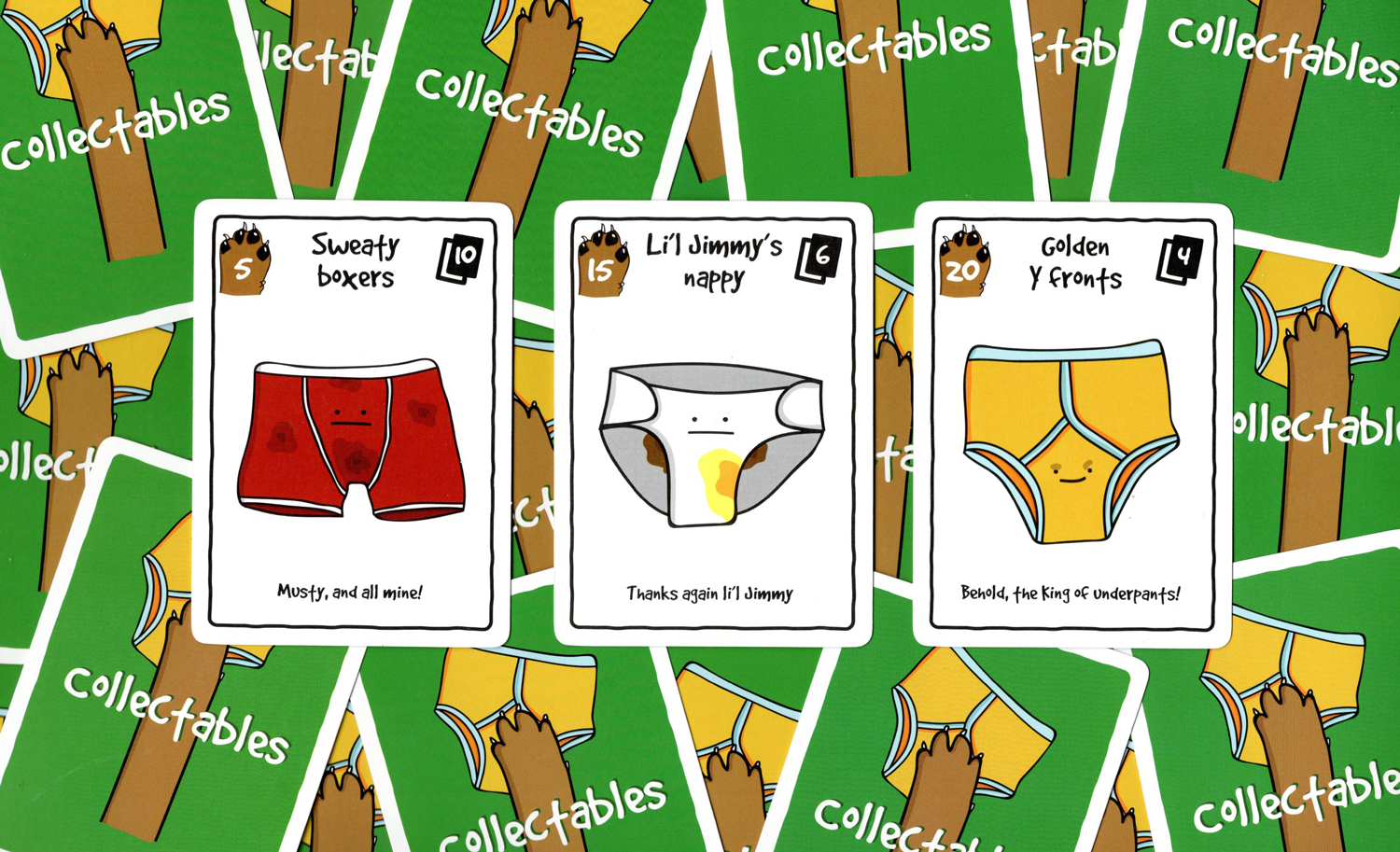 I have been lucky enough to chat to the designer on Instagram and I have discovered it really is a family created game. I really like that quality of this being a properly independent undertaking. This is a family game designed and created by a family – that’s quite special.

The few foibles with the rules shouldn’t put you off, especially as these have been addressed on their website and revised for the second printing.

I think if you have a pilfering pup in your household and you can identify with the theme more, you will certainly get some added enjoyment from the game. Even if you don’t there is plenty of fun to be had from the contents of this little box.

Part of this game’s endearing quality is that it has been made by a family who wanted to turn their idea into a reality. The idea of pups pilfering is great. Overall, Canine Kleptomaniacs is a fun family card game.

If you already own Canine Kleptomaniacs and enjoy it, or are looking for other inspiration, you might also like these similar games: 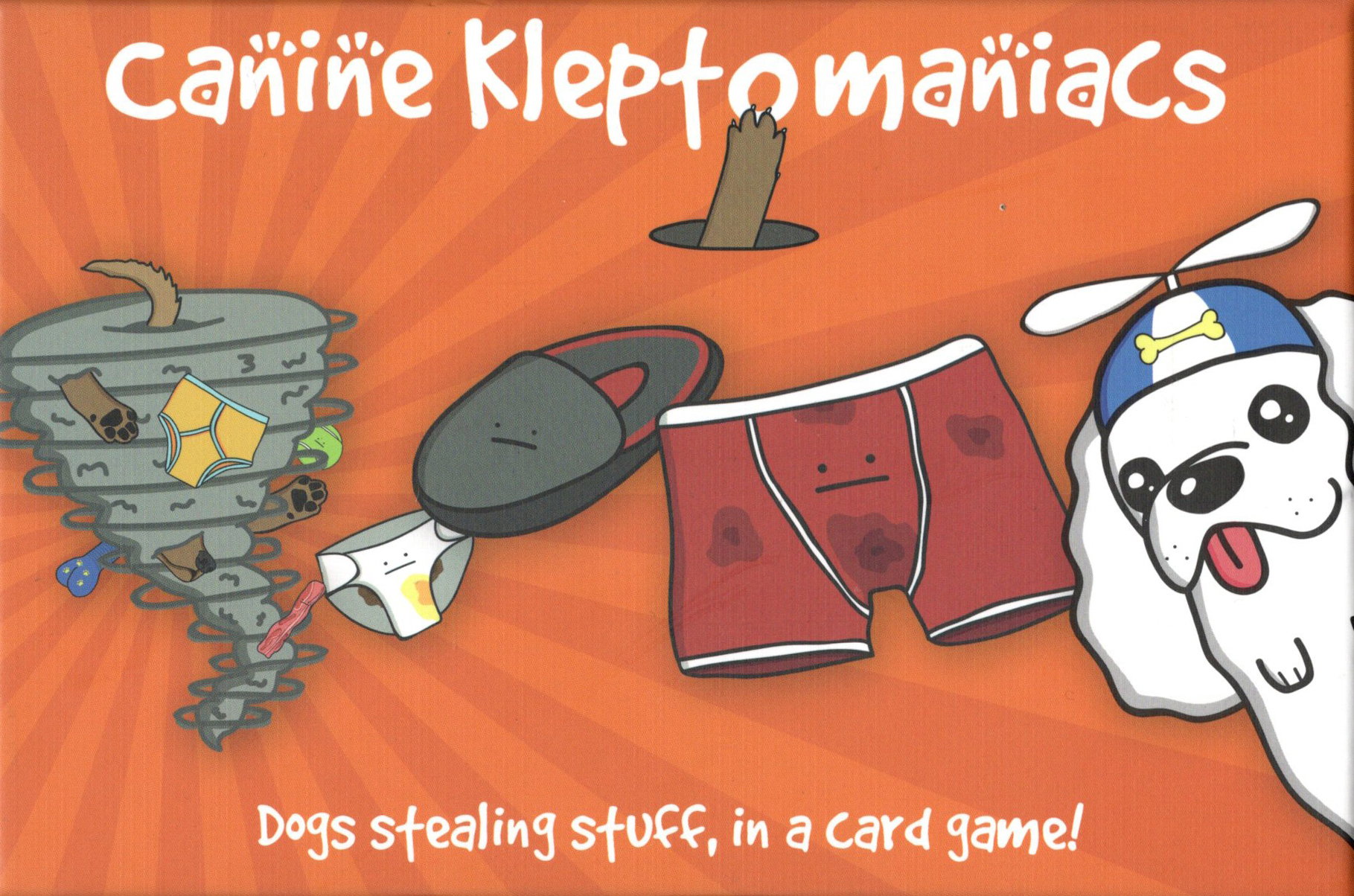 For clarity. We don’t get paid for our reviews. We were gifted this game by the publisher for an unbiased review, this has not affected our review in any way.