Advert: we were gifted this game by Arcane Wonders, this has not affected our opinion.

Prepare to earn your stripes and be rewarded for your strategic military prowess in Air, Land & Sea, a two player card game that may have flown under your radar!

War, huh. What is it good for? Well, Edwin Starr thought absolutely nothing! While I’m not trying to condone starting a war, I will say ancient and modern warfare has been the theme of many great board games. The Second World War for example has appeared in tabletop form with games such as Memoir 44 and Undaunted: Normandy. Designed by Jon Perry and published by Arcane Wonders, Air, Land & Sea joins these ranks. 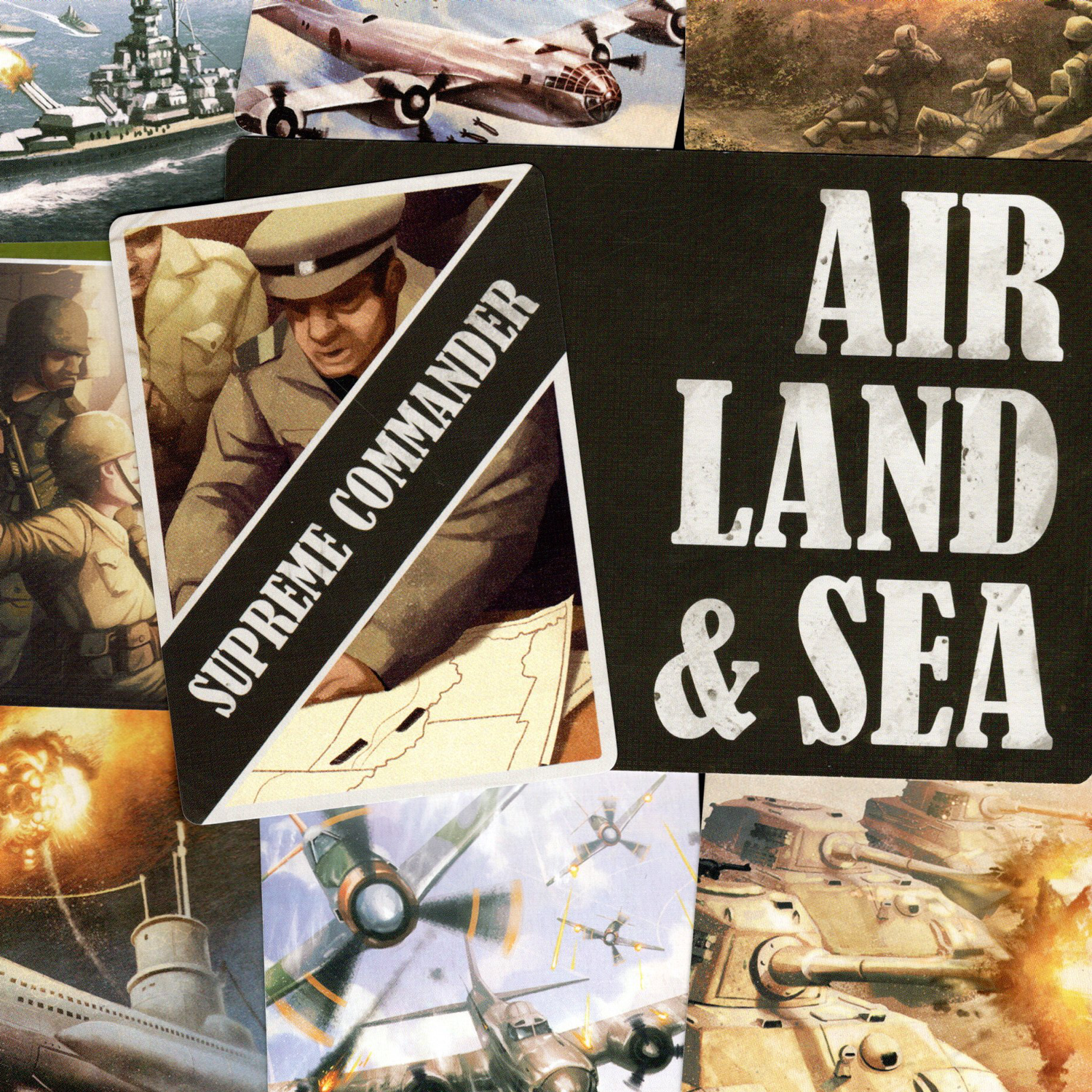 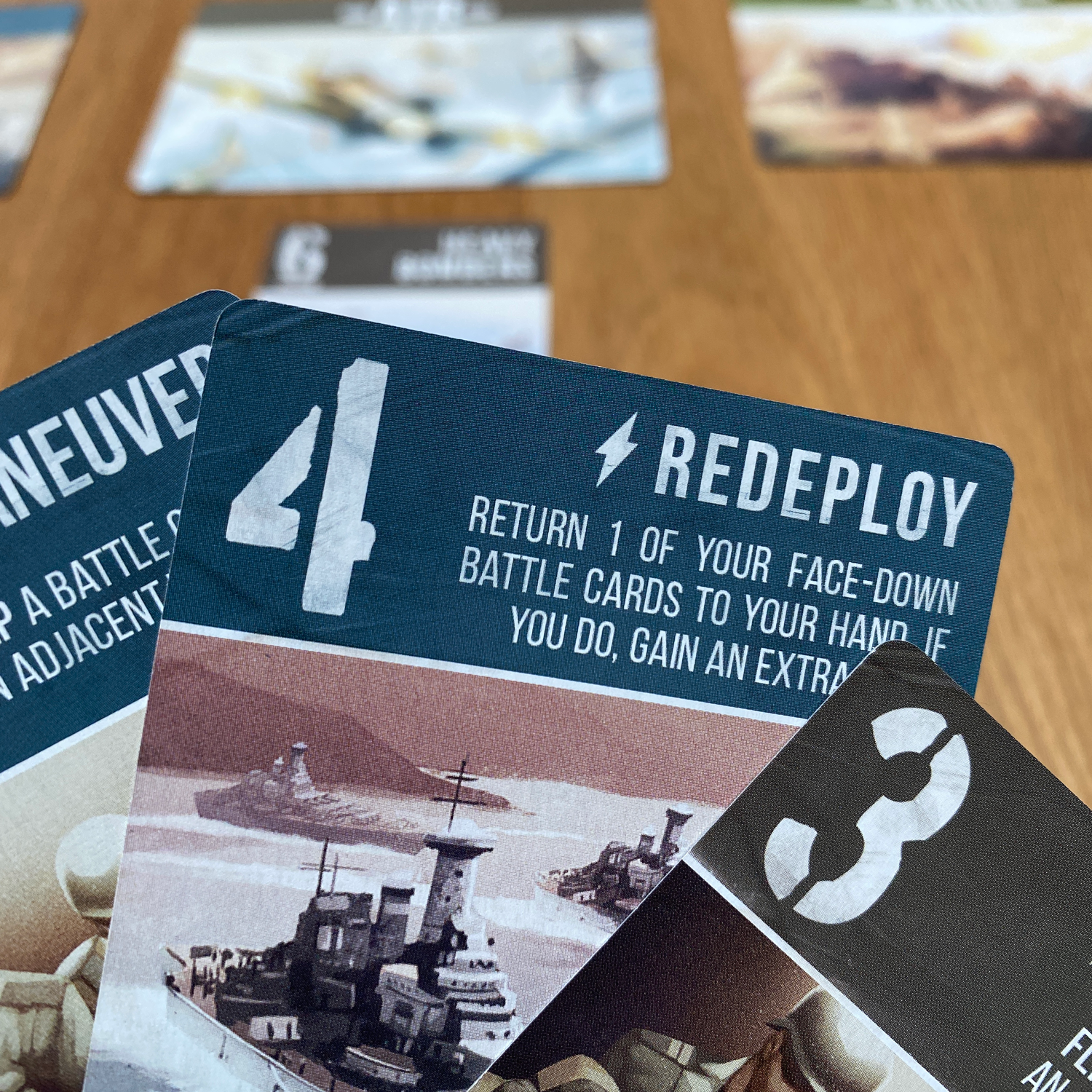 To win the game you need to be the first to obtain twelve victory points (or 18 for a longer encounter). The game is very quick to set-up. The three theatres of war: Air, Land and Sea, are represented by three cards separating the two adversaries. Six cards are then dealt to each player from the deck of just eighteen. The first and second player is decided and the relevant ‘Supreme Leader’ cards distributed. Each round the first player swaps as you would expect.

Looking at your hand you have to plan your moves wisely. You have to lay your card in the corresponding theatre. For example, if it is a naval card it has to be played in Sea. Alternatively you can play a card face down in any theatre.

Face down cards are worth two points at the end of the game, other cards will be worth their face up value between one and six. All but the heavyweight six point cards however, have special abilities, these range from flipping your or your opponent’s cards over to gaining an extra card from the draw deck buckshee, or making face down cards worth more.

If you have the most points in two of the theatres, you win six points. If points are tied in any of the theatres the first player wins it. As I said, the first player changes every round though so it is perfectly fair. So in theory you only need two outright victories to win the game. However, at any time you can retreat from the battle and grant your opponent fewer points. Allowing you to survive to fight another round. 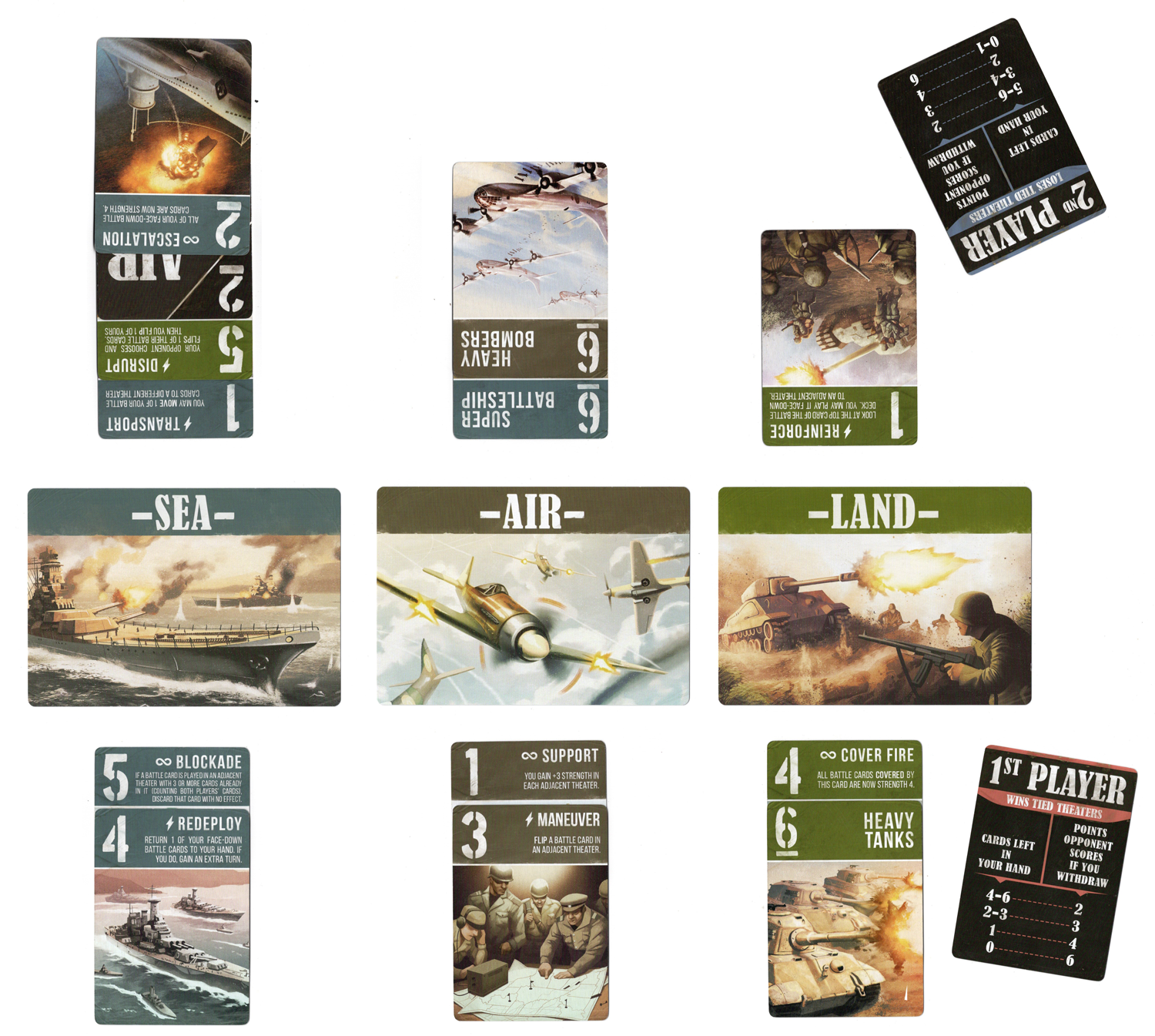 Sitting down and setting up Air, Land & Sea is refreshingly easy. The gameplay couldn’t be simpler. Yet the strategy behind every decision is immense. Which card to play first, where to play the card and how you can maximise each card’s ability feel key decisions on how to turn the tide of the war.

The option to retreat, further complicates things and is a brilliant addition to the game. You will start most rounds with blind optimism and a gung ho outlook. As things play out and your coding of the cards starts to dwindle you may try to adapt and react or perhaps you should be retiring instead of attempting the kamikaze. The earlier you retreat, the better, as less points are given away. This balancing act of whether to listen to your fight or flight response is great and a bit like folding in poker. If you grab victory in the face of defeat it really is your finest hour!

The box says it is for ages 14+ but I reckon that can be reduced to 8-10 depending on the child. 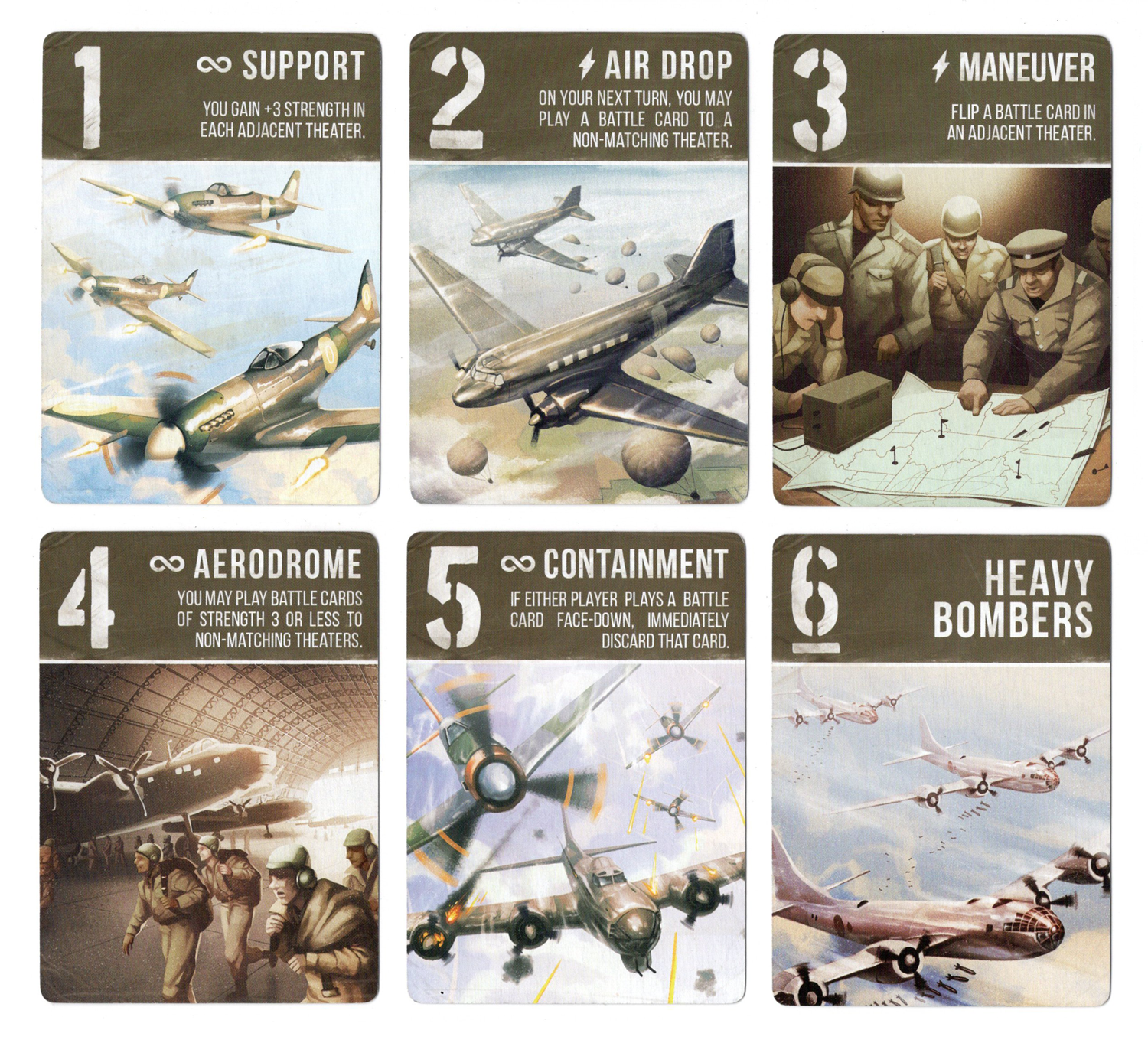 There really isn’t much in the box to discuss. Despite the lack of components, the theme is prevalent and offered through the great typography and design.

The cards have some great illustrations adorning them by Valerio Buonfantino and Stephen Gibson, that show some of the hurly-burly of wartime. The victory point tokens are good and everything is nice quality. The insert of the box is cool too.

When learning, I think I needed to cross reference a couple of interpretations, but overall it was easy to learn and the rule book was good. Also, once you know and understand the sixteen cards it all gets much easier! In case you need there is also further card explanations on their website you can find here.

The compact size does mean this will always travel with me when I am going away without creating a yomp. 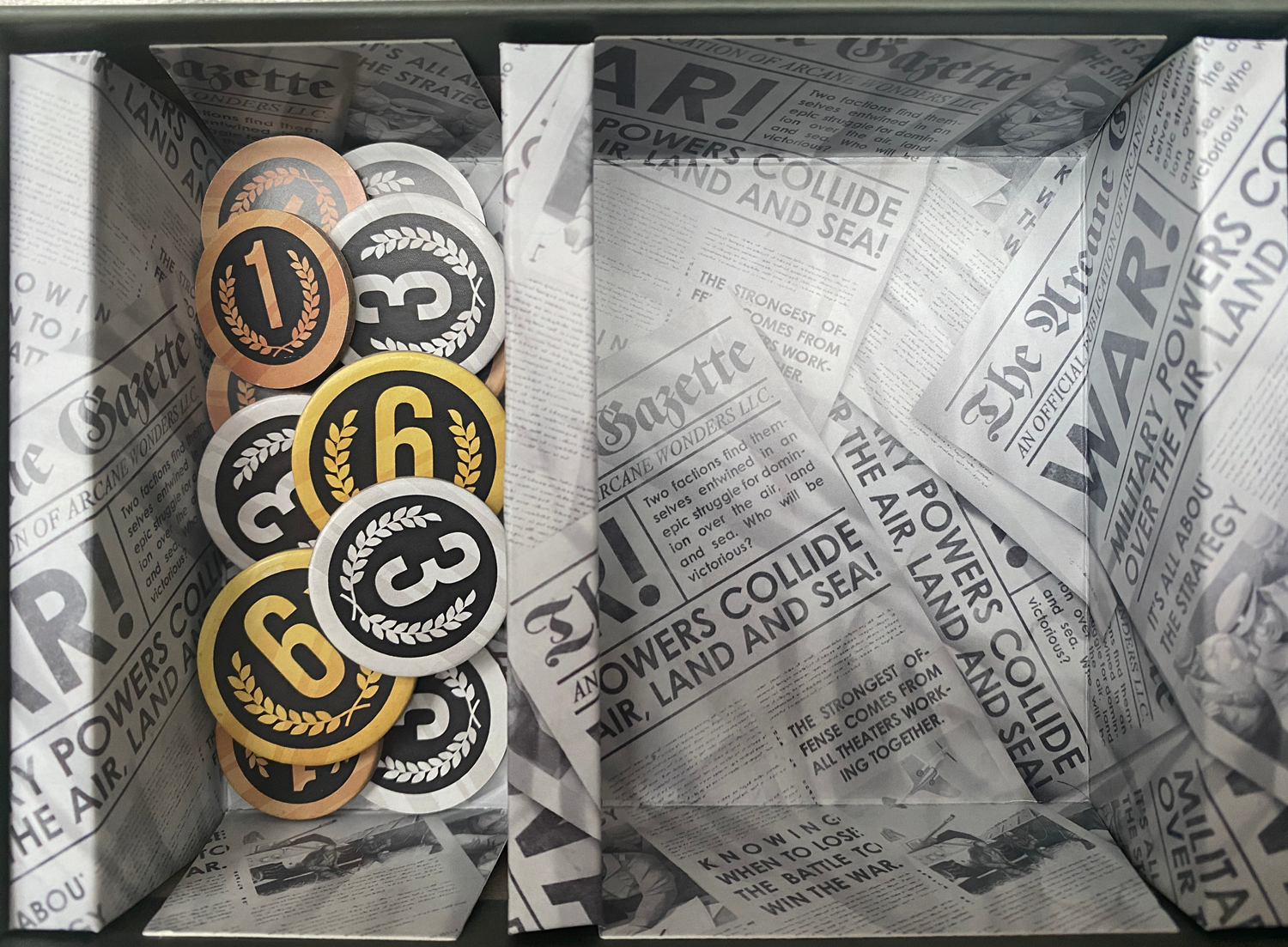 So many games that play quickly as a filler are often on the lighter side. I love the amount of strategy that has been packed into this little box. It is perfect for that moment you want some strategy without having to hunker down for more than 15-30.

Air, Land & Sea is a head-to-head card game duel in its simplest and purest form. Edited exquisitely to have the minimum inside the box to still offer maximum gameplay. I am blown away by how much can be achieved with so little and I’m full of admiration for the designer, Jon Perry.

The military theme may put some people off. It certainly didn’t instantly warm my wife to the game. If you feel like that, I urge you to try and push on through. You probably don’t love trains but I bet you’ve enjoyed Ticket to Ride at some point!

Questions could be raised over the replayability with so few cards. To put this directly in the crosshairs it has plenty. The more you know the cards and the game, the more the strategy becomes prevalent giving the game added depth. It’s also a game I look forward to playing time and time again.

This is a brilliant two player game. Refined to the minimum yet providing the maximum from the sum of its parts. The theme may not be for everyone, but the coding and tactical strategy is in abundance and if that sounds like something you would want in your locker, be sure to add it to your kit bag today!

If you already own Air, Land & Sea and enjoy it, or are looking for other inspiration, you might also like these similar games: 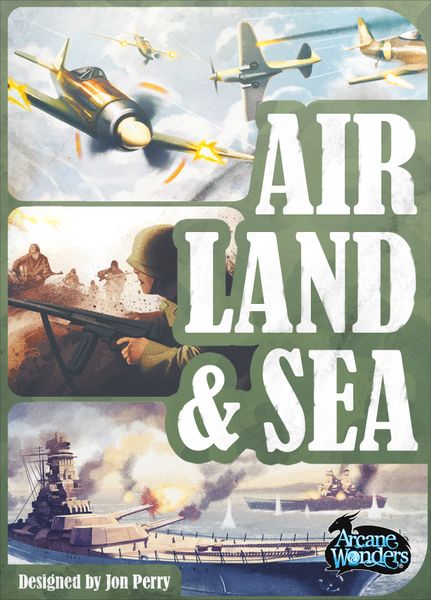 For clarity. We don’t get paid for our reviews. We were given this game by Arcane Wonders, this has not affected our review in any way.