It was OutKast who sung the line “shake it like a polaroid picture”. The reference of a polaroid picture is probably unfathomable for some generations now. The tenuous link with the American hip-hop duo and the board game hobby can be perfectly exemplified with Panic Mansion from Blue Orange Games, especially if I could use its overseas nom de plume, Shaky Manor.

Now obviously I could’ve referenced Shakin’ Stevens in my introductory paragraph, but then that would’ve made me “Cry Just a Little Bit”. Another unfathomable reference for some generations. Anyway, enough silly musical references, you want to find out about Panic Mansion…

Panic Mansion is a dexterity game for two to four players. Each player is armed with an eight room mansion, a brave explorer meeple and a host of other cool components.

The game revolves around a deck of cards. These cards dictate which components need to be together in which one room. No other components are allowed to be in the room that aren’t on the card.

To get the components into the various room players tap, jiggle and shake the components around the Panic Mansion. The winner of five of these challenges wins the game.

Players dictate the starting places of the components for the player on the right. The game is really that simple.

The game is designed by Asger Harding Granerud and Daniel Skjold Pedersen, the duo behind Deep Blue and Copenhagen. 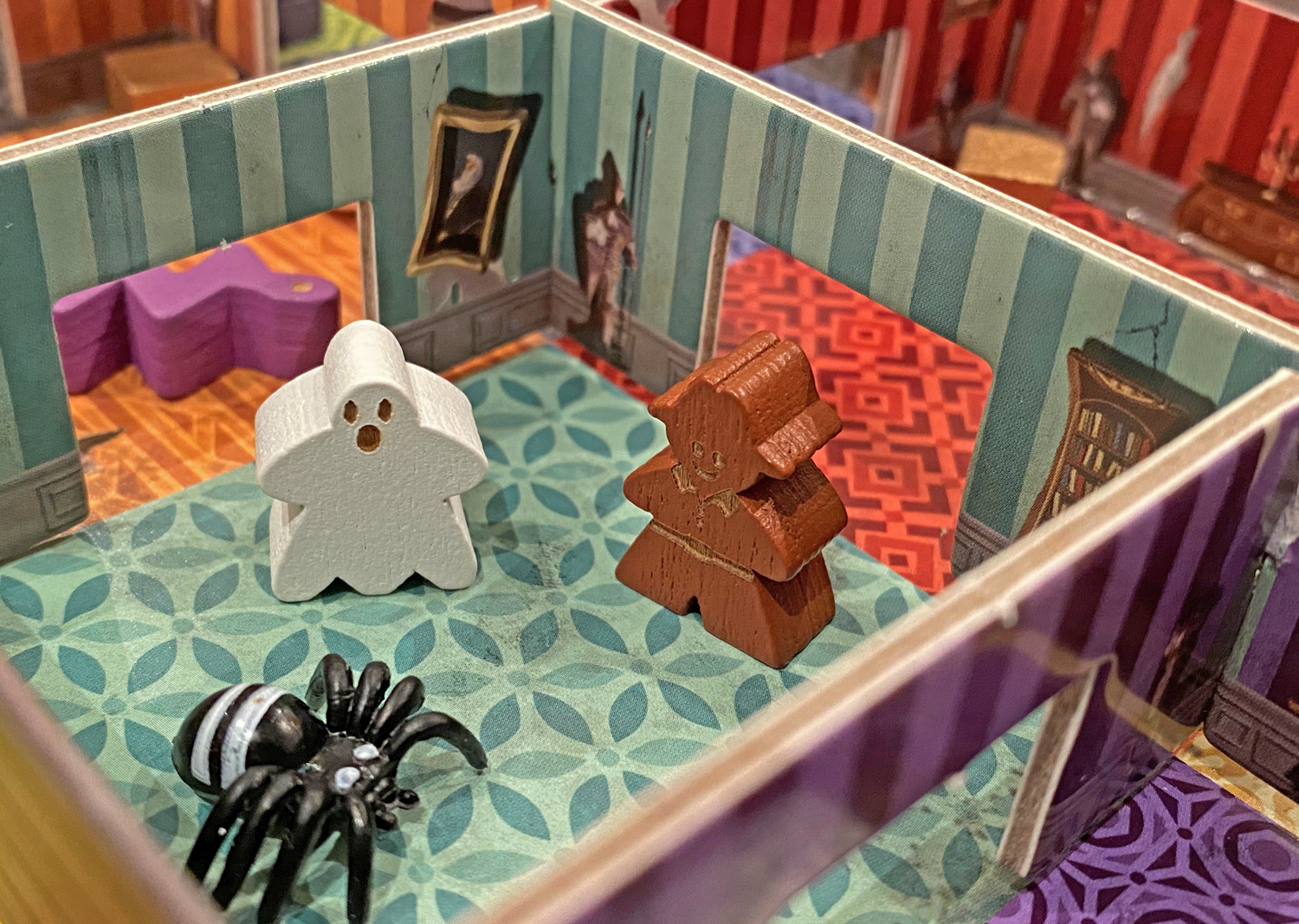 The super easy rules and gameplay make this an infinitely accessible game suitable for all ages. In terms of family play, you are probably not playing on a level playing field with younger players, but you will all be having fun.

There is shaking, tapping and the occasional flying eyeball. Interspersed with ‘Get in the…’, ‘oh nearly…’, ‘grrrr’, ‘GAH!’ and other noises you would expect to read in the Beano. That is as far as interaction gets though, as the shaking of the boards is very insular. You do not ever feel like you have time to see how other people are getting on.

It is quite a frantic game, but this comes in short sharp waves. With natural punctuation from the overturning of the cards.

It is one of those scarce games that is fun for adults but also one that you can actually explain to children and let them play on their own. Assuming you are okay with the fact you there will probably be one period of play paused while someone finds a ghost on the floor which fled from the manor with an overzealous shake from an over-excited youngling. 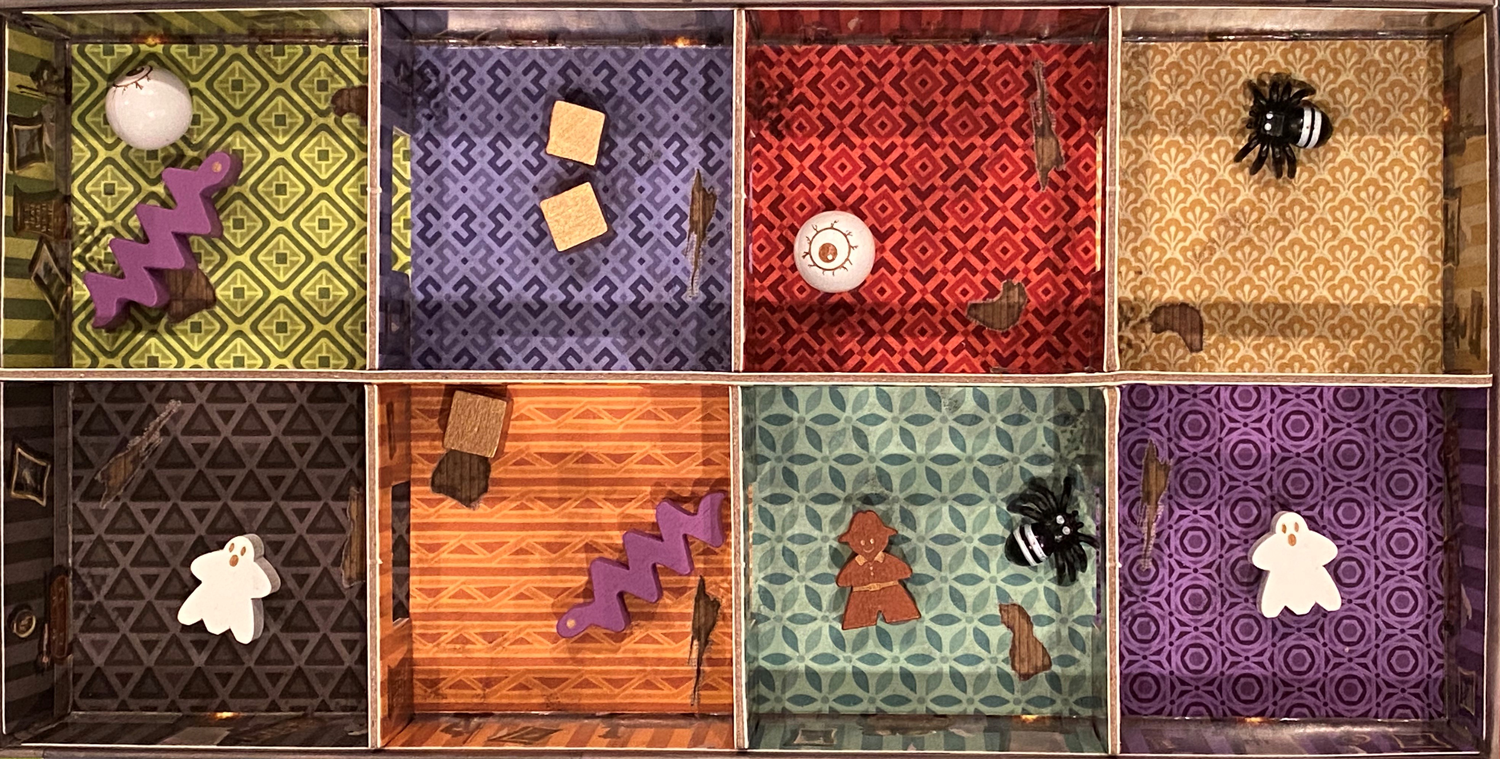 Most of the components in Panic Mansion are impressive. The wooden explorer and ghost meeples are simply the best. The wooden snakes, plastic spiders and everso annoying super-fast rolling eyeballs are all great too. The golden cube crates could be better, but the other components make you look at these with rose-tinted glasses!

The four playing boards you do have to put together yourself and the dividing walls don’t feel quite as sturdy or rigidly in place as I would like. I confess this is me being slightly pernickety. At the same time I would’ve loved a clear Mylar-style plastic lid to stop components from escaping from the manor house, that’s probably just me.

All the components and boards pack away fully set up in the box. If you happen to be in your friendly local game store you can even demo the game before you buy it. You see, the base of the box has a window revealing a set up manor house ready for you to shake and tap. Kudos to the designers for this, it is a really nice touch.

It is good for children to play unsupervised as they will get every aspect of it. An argument over a rule is as rare as unicorn poo as the rules are so few and so simple to grasp it would never be a problem.

If my board game collection was stolen [shudders], I’m not sure Panic Mansion would be top of the list of games that I would rush out and rebuy. However, the concept is simple and fun and the components are very good. Overall I am pleased that I own it as we do play it.

Realistically Panic Mansion is a bit of a novelty. A party game or family game that you will have great fun with for 10-20 super-competitive minutes every so often. However, it is sadly unlikely to hit the table as often as some others.

If you already own Panic Mansion and enjoy it, or are looking for other inspiration, you might also like these similar games: 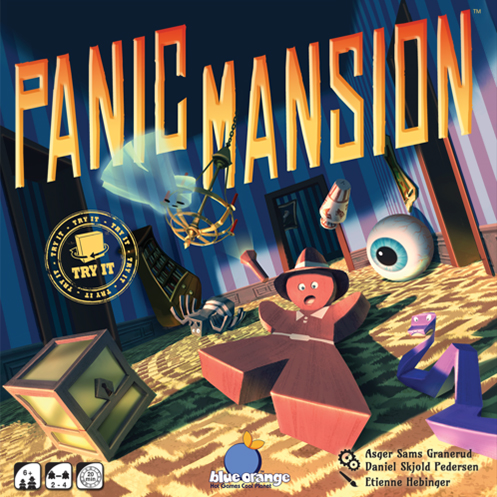 For clarity. We don’t get paid for our reviews. We were kindly given this game for Christmas from a relative, this has not affected our review in any way.