The world’s gone mad! These days bribing drunken dwarves in taverns to join your army with the aim of impressing the king is frowned upon. Fortunately though, you can at least still re-enact such times in the board game Nidavellir. Okay, so that’s not quite how the rulebook narrates it, but it’s how it works in my head.

It may not be everyone’s ideal setting for a game, but only a court jester would overlook this one based on its theme. So grab a pint and glug down my review of the board game, Nidavellir.

The first time you play you will need to build the coin market holder, this is really easy to do and fits in the box once erect so is a one-off. As a horizontal stacker on my board game shelves, I can brag that I also store my coins in the rack inside the box for easier set up -a luxury that vertical stackers would certainly not be able to entertain!

Which coins, gems and cards are used in each game does vary for different player counts to ensure the game is balanced. This never takes that long so isn’t much of a burden, but something to be aware of. The instructions and components do a good job of letting you know what should be included though so I will leave you to consult that.

Each player will need a board, a set of coins and a randomly assigned gem. Arrange the bonus hero cards on the racks provided and shuffle the First and Second era cards and form two face down draw piles. Lay the pub signs down the middle of the table and place the relevant number of dwarf cards in each tavern. You are ready to play Nidavellir! 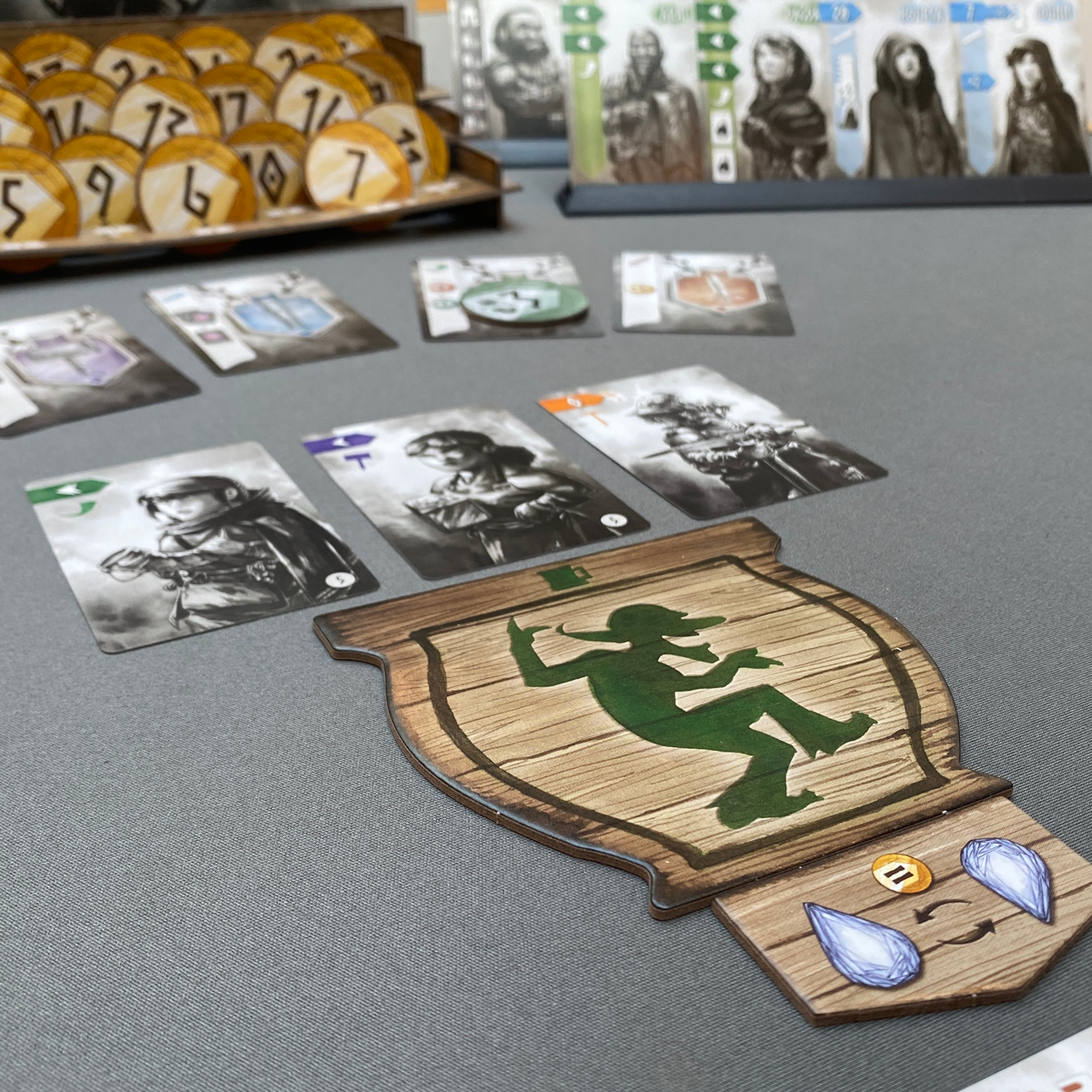 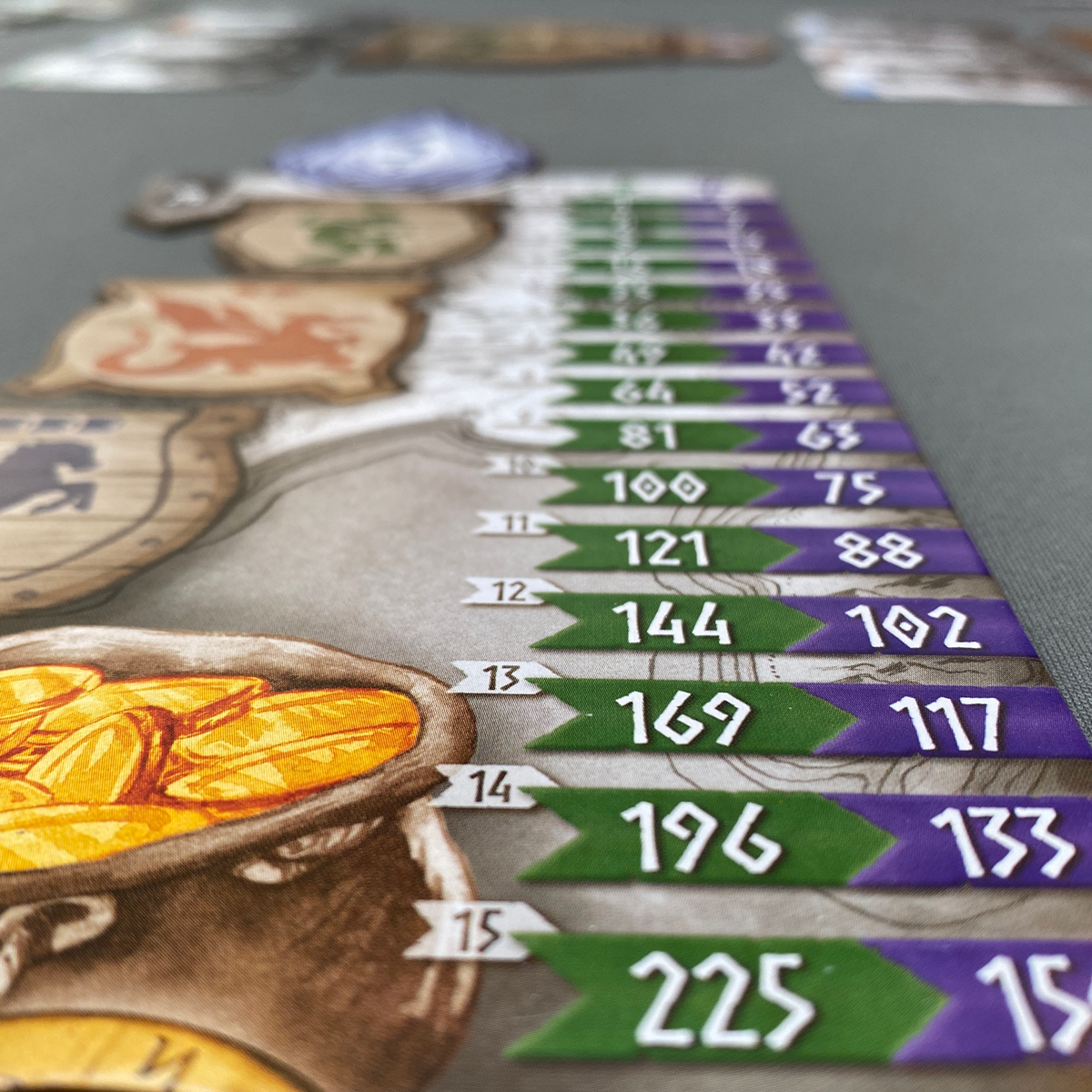 On your turn you will look at the offering of warriors on the table. You will then allocate a single coin as a secret bid allocated to each tavern, leaving you with two coins left over. Bidding a zero value coin allows you to upgrade the two coins you didn’t use. Potentially allowing you to flex your bidding muscles in a future round and score more points at the end of the game.

Players then reveal their bids, tavern-by-tavern, with the highest value coin getting to recruit a warrior first. Once all three taverns have been explored, more cards are dealt and the process is repeated.

Whenever, you complete a row containing each type of class of warrior you can attract a hero to your ranks, all are great and will aid you in gaining more points, or helping with your strategy.

Midway through the game the first era cards run out. At this point the king arrives to inspect your troops. Bonuses will be awarded for having the most dwarves of each class which will benefit you in some way shape or form. All are good, but some are better than others.

The second era cards are then played into the taverns with the gameplay continuing as before. Once all the cards are played, scores are tallied and the winning dwarf army announced. 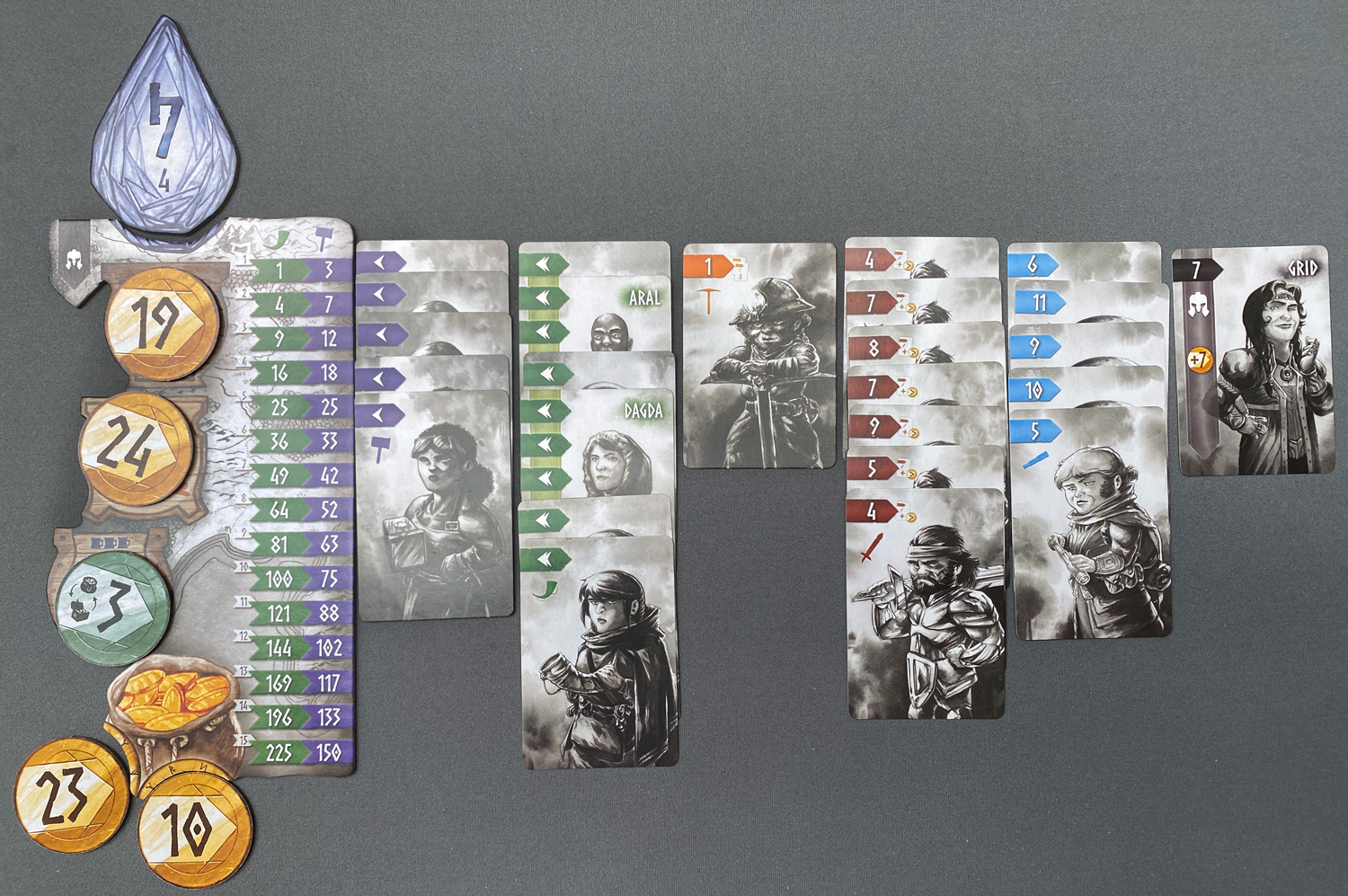 This is an easy to learn and easy to teach game that has a variety of strategies for players to explore. There is plenty to think about, what to bid where and what coins to upgrade is the first challenge and then which warriors to recruit to maximise the scoring potential available. If your own personal quandary isn’t enough to contend with you will be glancing at other player’s tableau to ensure you aren’t leaving them a fantastic card too.

The auction mechanic works fantastically well, even at two players which may surprise some people. I call it an auction mechanic as technically it is, but it feels more like a betting mechanic to me. It works so well in Nidavellir because there is a fantastic mechanism for settling tie-breaks involving gems of different values that gets swapped around whenever they are involved in settling a tie. I think the necessity of upgrading coins also stops you using your trump coins all the time too.

The upgrading of coins is a fascinating part of the game, really simple but really clever and the game would not be the same without it. I like how sometimes, when a coin isn’t available, you can claim the coin of the next value up, which can really help at higher player counts.

Not all heroes and mid-way bonuses are equal, but that adds to the strategy of the game. Some you will race for, others are nice to have but not essential. There are however, three characters in the game that are quite overpowered. The rulebook suggests to leave these out when first playing. They change the game so much I rarely add them in. I find they reduce the enjoyment of the game, rather than enhance it.

Speaking of player counts, I like this game at 2, 3, 4 and 5 players, so all the possible player counts. The speed in which the game is played does not alter that dramatically from 2 to 5 players as play moves around at a good pace.

Playtime as a whole is relatively quick. Although not particularly heavy, Nidavellir offers enough strategy and things to think about to be a fantastic option for a mid-week, after work game. 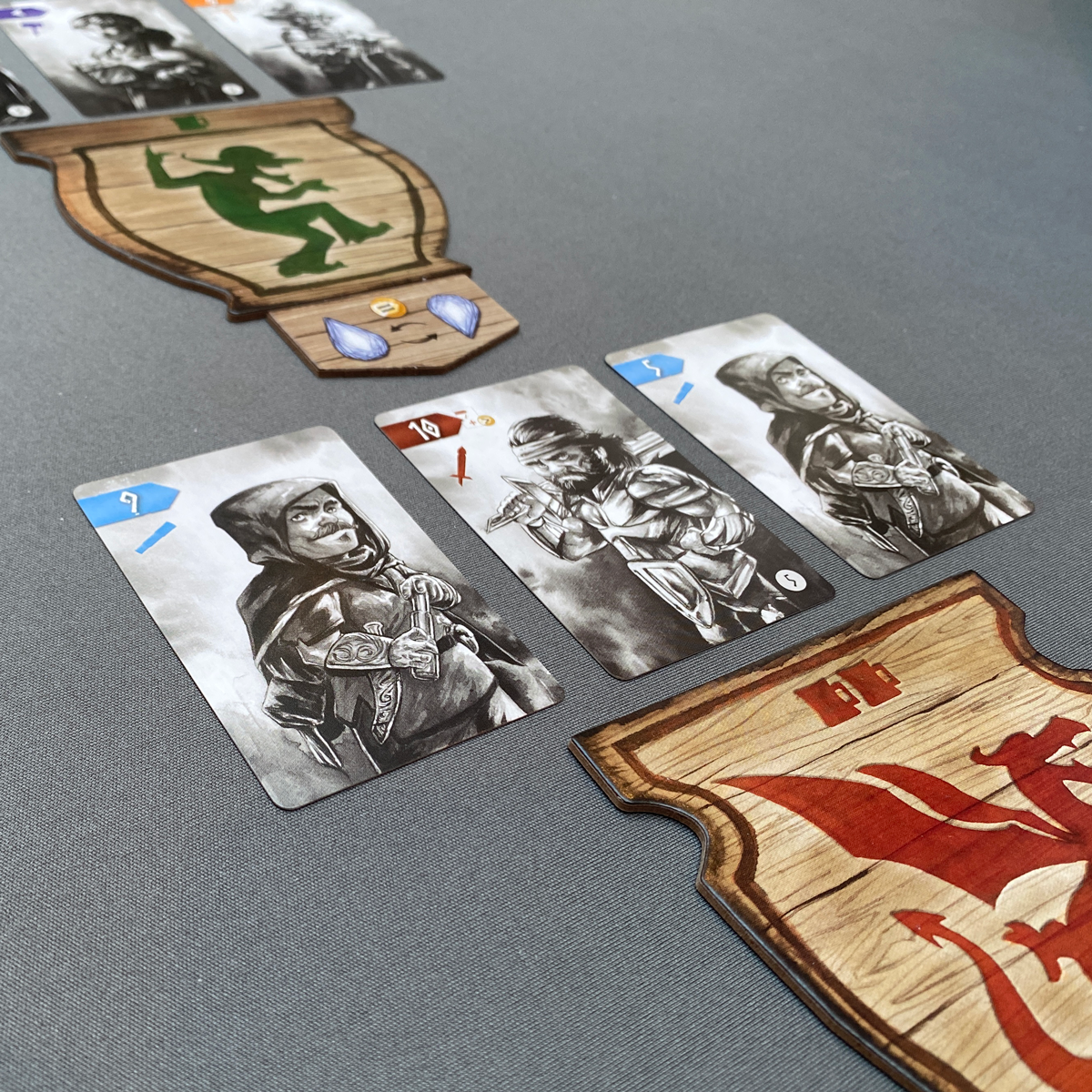 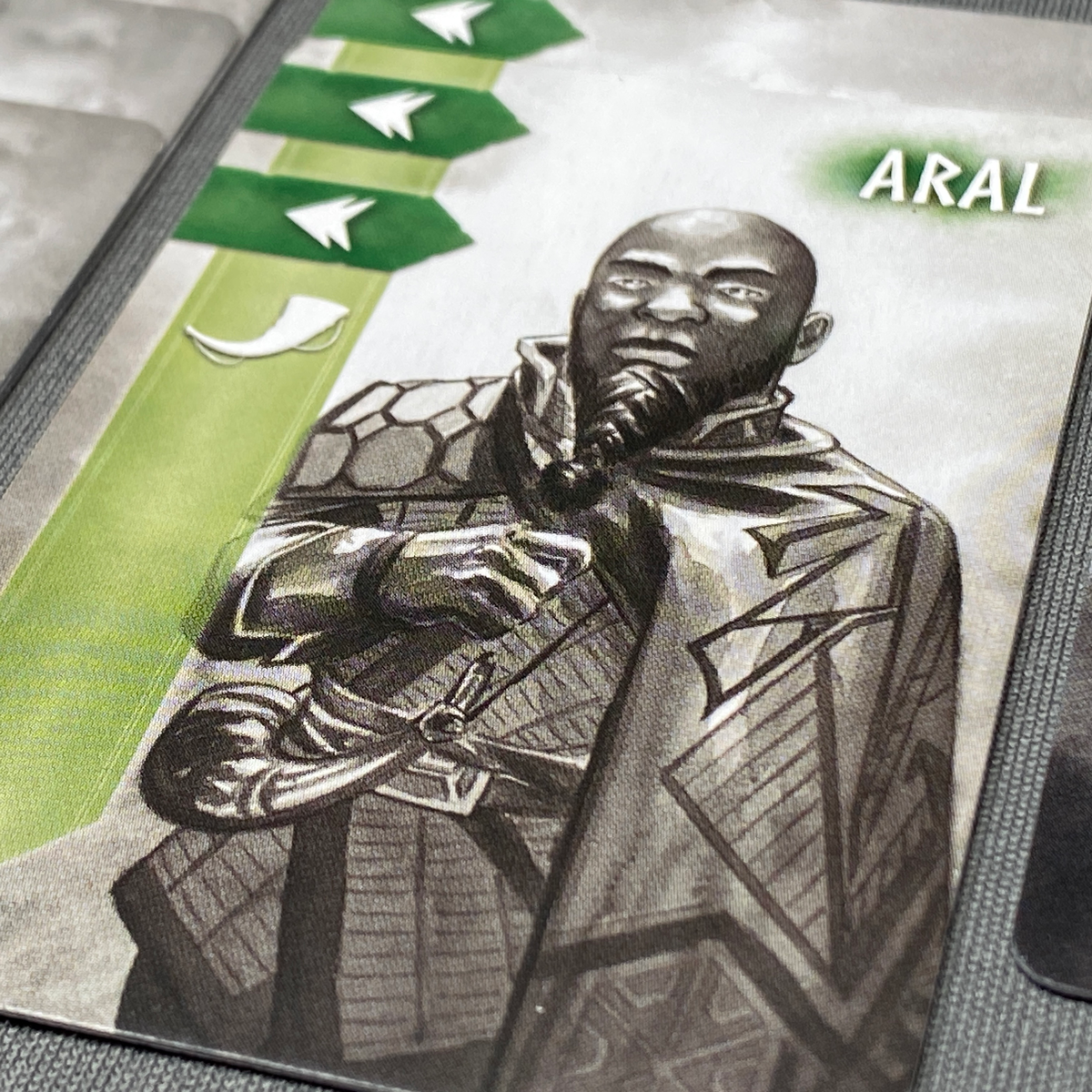 Firstly, the box art is a bit misleading. For me, it looks like a heavier game than it is. The box art alone nearly put my wife off as she thought it was going to be some fantasy game that it just isn’t. My wife pushed past that barrier and has found a game that she loves.

While the game is straight forward the rulebook covers all bases which means it takes a little bit of wading through. It soon starts to click when playing through it though.

I really like the card art, especially the more individual artwork on the hero cards. The black and white style may not be for everyone, but it works for me. There is also a spattering of diversity displayed on them too.

The coin holder is a bit rickety, if you are handy with some glue it can certainly be shored up. The coins themselves are fine, would I have liked these to be pimped a little bit more, well yes of course, metal coins would’ve been incredible, but the cardboard coins are fine. Similarly, the gems and player boards are all okay.

I think the game would’ve really benefitted from player aids that briefly synopsised the scoring of each class and the halfway bonuses. They would be nice to have, especially when introducing the game to new people.

Overall, though what’s in the box is great. The components are well thought out and of a good standard 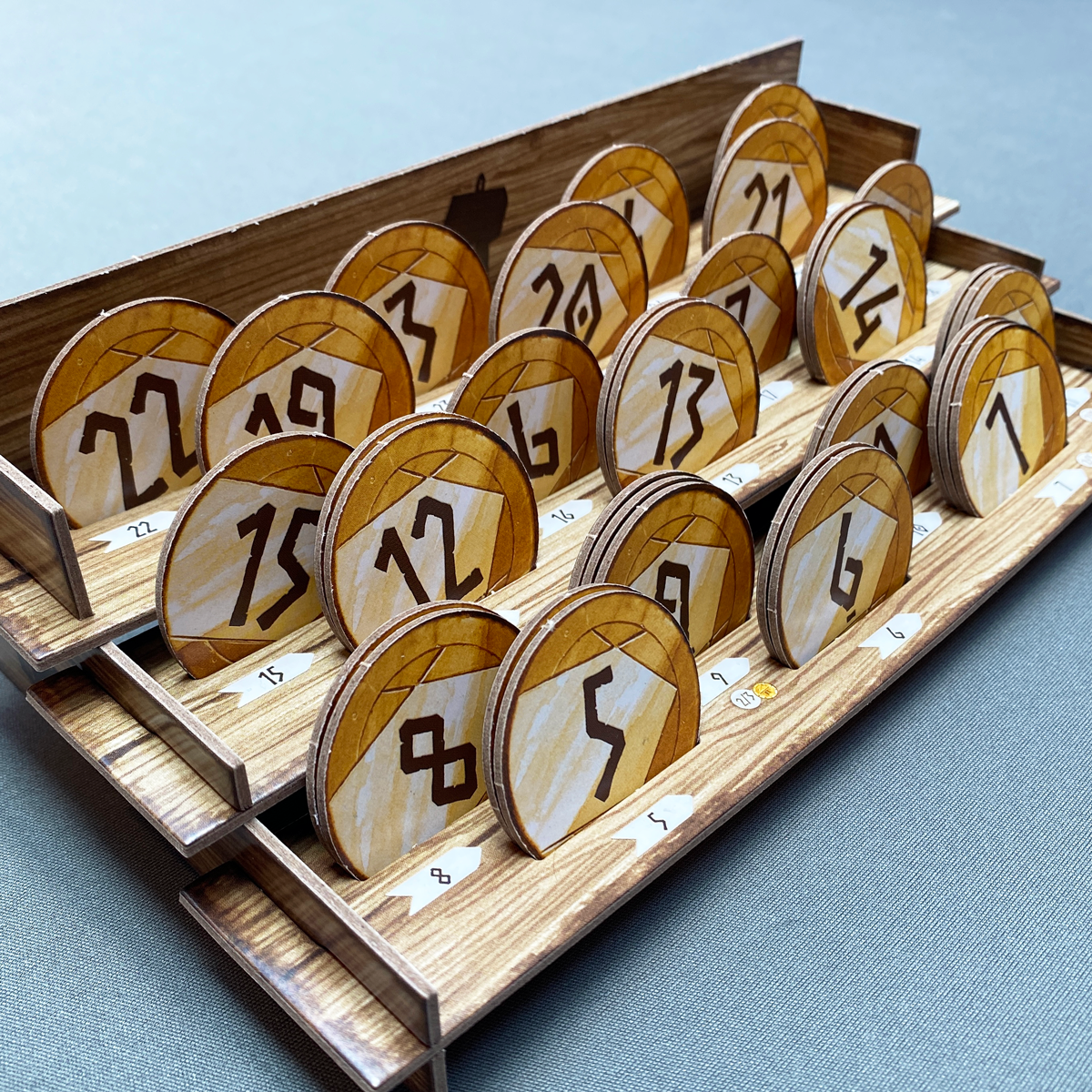 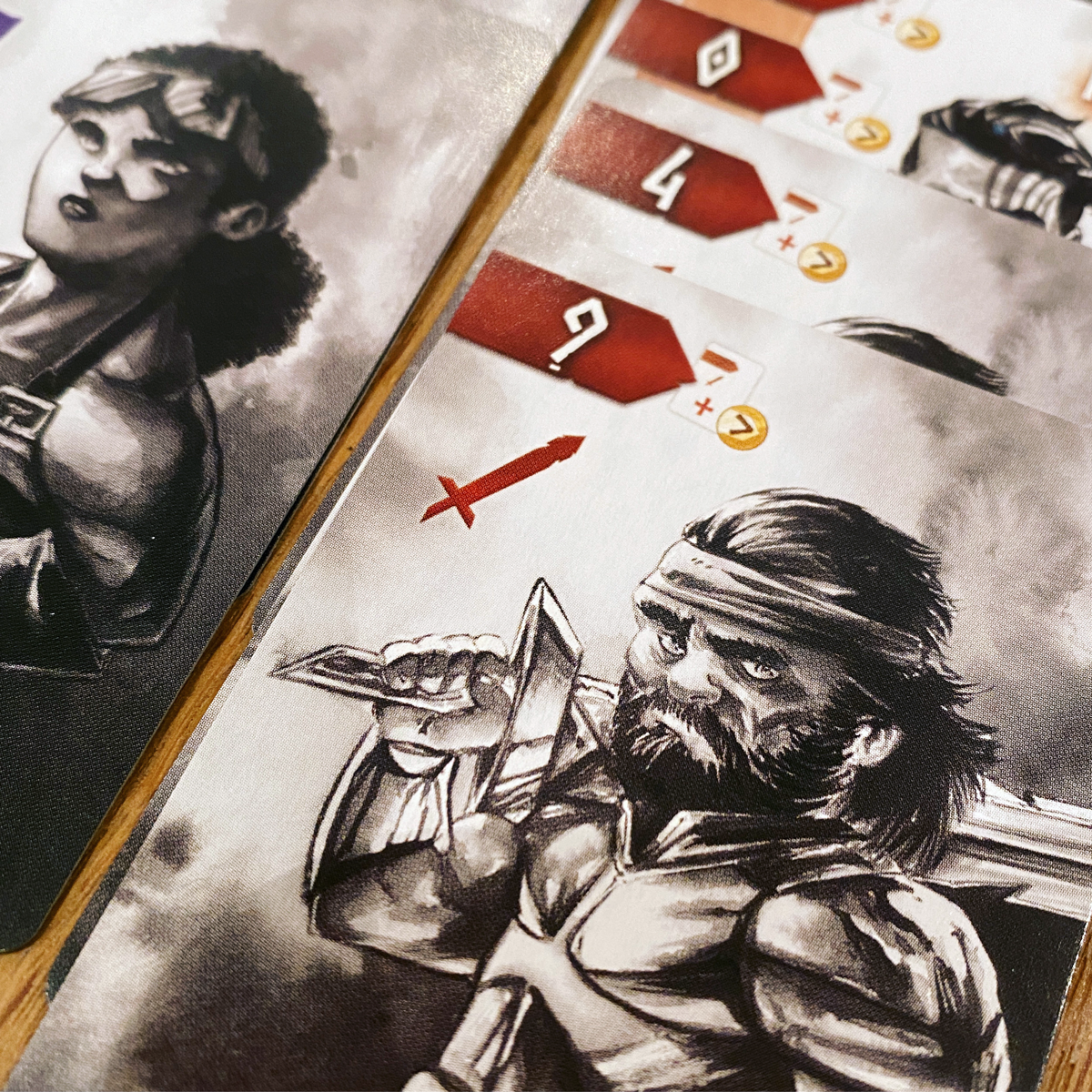 Harrison (14): It’s good, I really like Nidavellir. The tiebreak mechanism is very clever with the gems and how they are resolved, making it fairer and funner. I also like the bonuses you get when the King visits halfway through. My favourite tribe is the red, that’s what I usually go for.

I dislike a game where during final scoring you can end up with negative points or just scrape the barrel to get into double figures. Fortunately that is not the case with Nidavellir, as your scores will regularly get to three figures and generally still be close.

There is plenty to explore in Nidavellir too. Delving into different strategies of dwarf factions or racing for heroes is interesting. Add to this the upgrading of coins and balancing this with winning the bids in each tavern adds nicely to the point salad on offer.

Because you recruit the warriors in taverns, I feel compelled to compare Nidavellir to a beer. As a beverage it would thematically be a stout. It would go down smoothly and rarely cause you to burp. What’s more, it certainly won’t give you a headache, maybe a mild pain in the temples from the final scoring, but nothing a brisk walk outside wouldn’t shake off!

Nidavellir is a really brilliant and straight-forward set collection game packaged up in a theme you will either love or not mind. Fortunately, I am hugely in favour or building a dwarf army, as are most people I have introduced this game to!

I would recommend not judging this board game by its box art cover. Nidavellir offers engaging set collection in quite a pure form. Even with a bidding mechanic, this board game is absolutely brilliant at all player counts. I have no problem recommending it as a game you should try out if you get the opportunity. I have to say, it is one of my favourite purchases of recent times!

If you already own Nidavellir and enjoy it, or are looking for other inspiration, you might also like these similar games:

Buy Nidavellir
from Out of Town Games

For clarity: we don’t get paid for our reviews, I paid for this game with my children’s inheritance. We have tried not to let this affect our review in any way.

Skora, Game of the Month – May 2022 Akropolis Review