If you are unfamiliar with Desmond the Moon Bear, Mine Turtle, Skateboard Cow and the Kid Who Likes Trains, then you probably don’t know Mr Muffin either. Although only appearing a few times in the asdfmovies (pronounced ass-duff), Mr Muffin went on to feature in an annoyingly catchy song elaborating on how he just wants to be eaten and die. He also has put his name to the brand new card game from Big Potato Games in conjunction with the asdfmovie team – Muffin Time.

For those that need more of an introduction, you are obviously not one of the 11million viewers of the asdfmovie complete collection on YouTube. All 12 episodes can be viewed in under 23 minutes, so you haven’t got much of an excuse not to watch TomSka’s creation.

Now I probably should warn you that, despite the linear emoticon look, asdfmovies could be deemed more than a little macabre. The short sketches are very funny though, albeit via dark humour. The wackiness reminds me of Monty Python, but just a bit more violent. The zany fun of the cartoons transfers to the game and gameplay of Muffin Time exceptionally well. Almost as brilliantly as me linking to the next section of the review. 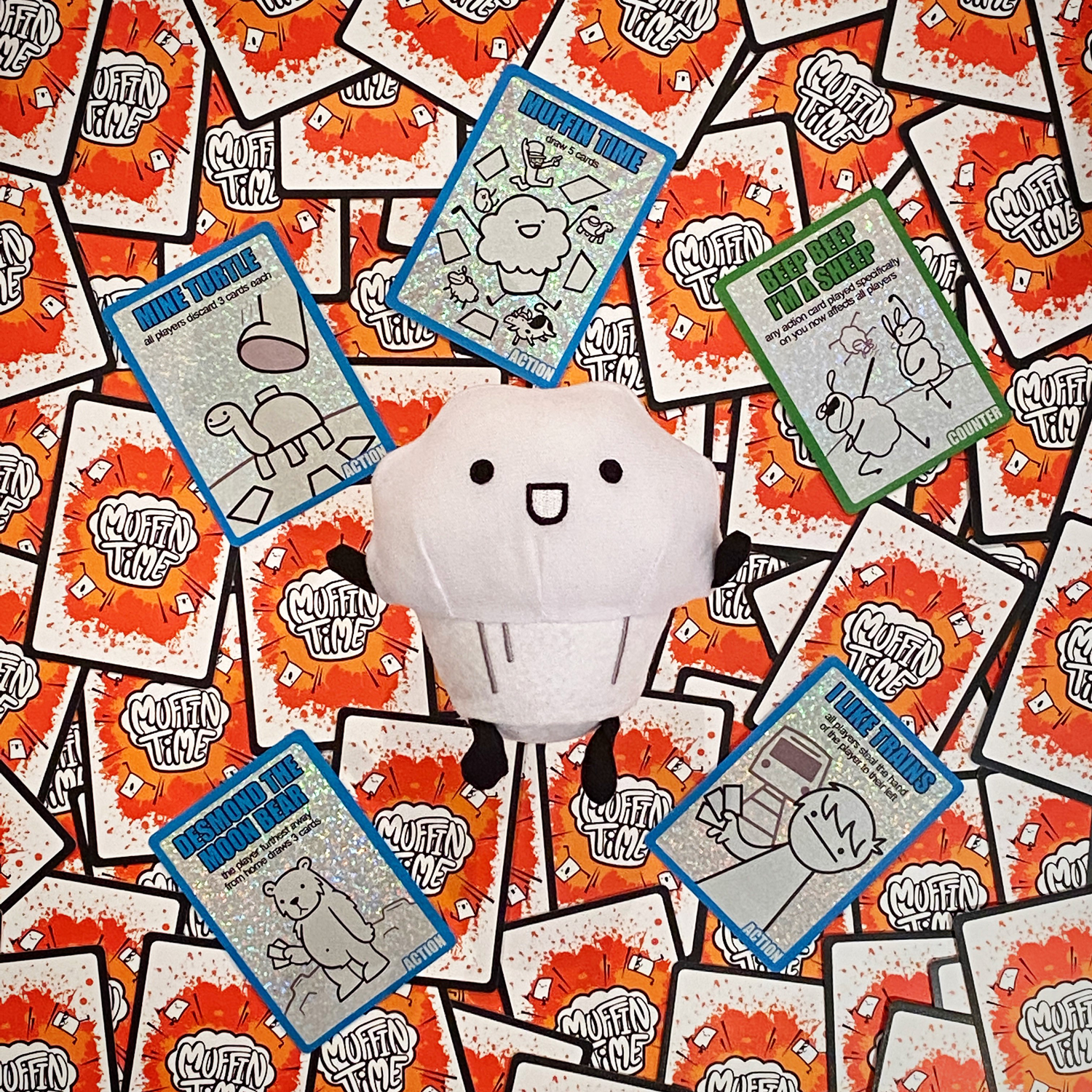 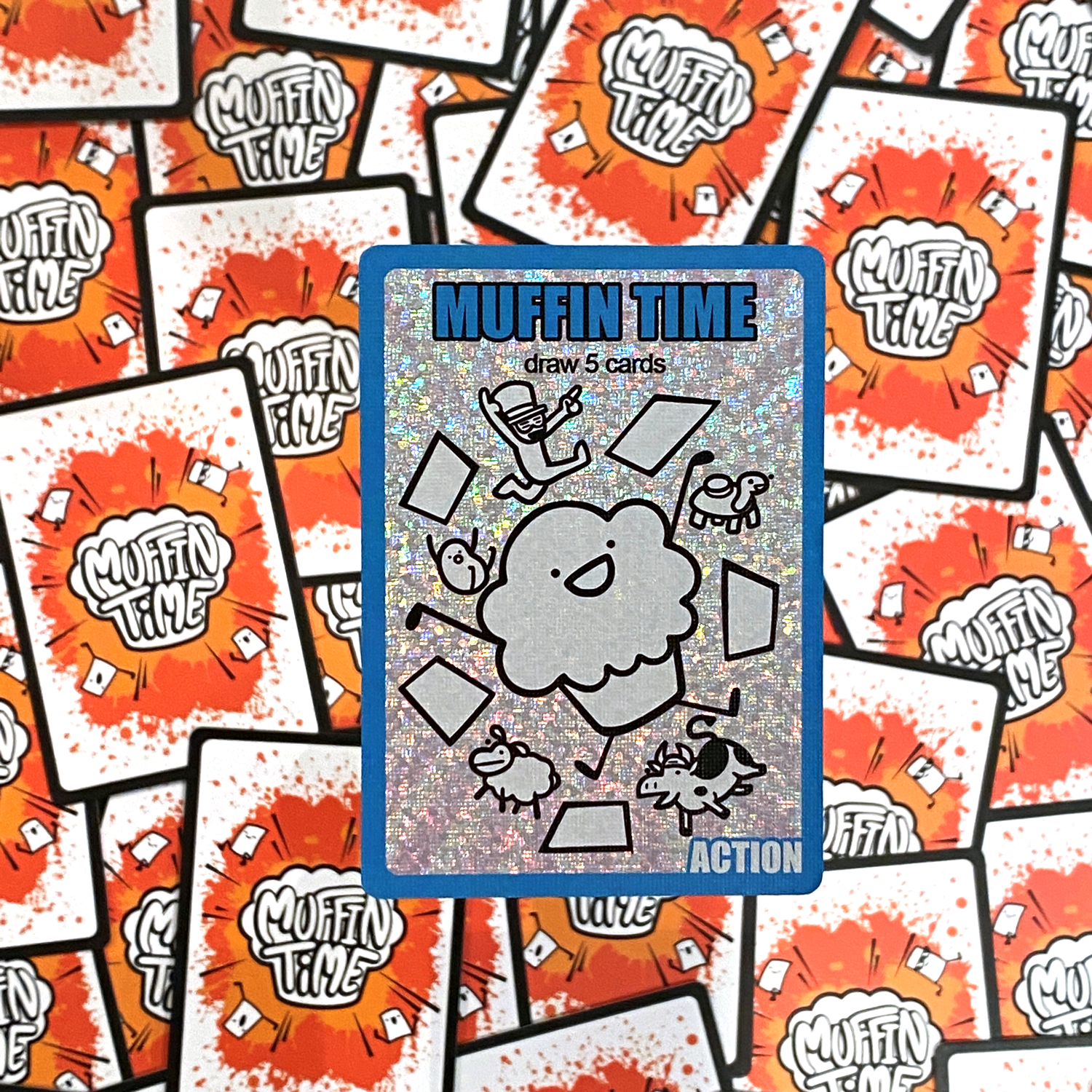 You start the game with three random cards. On your turn the first thing you can do is play a Trap card if you have one. These are exactly as they sound, and to quote Admiral Ackbar in Star Wars ‘It’s a trap!’. Those familiar with Big Potato Games’ Don’t Get Got will understand these cards already. For those that aren’t, Trap cards will activate when something happens, this might be someone asking what the time is for example, this will trigger a bonus for its owner, or a punishment for the ambushed player.

A player can then either draw a card from the draw deck, or play an Action card. Action cards usually force you or another player to draw, steal or discard cards. Other mayhem can ensue as some action cards force you to restart the game, or pass your cards to the player on your left, or even change the number of cards needed to win. Mini Games can also be triggered with some Action cards, these add a little more quirky enjoyment.

Your only defence against these Action cards is the Counter cards. These tend to block the advancements of your attacker and are very much akin to Nope cards in Exploding Kittens.

I’m not entirely sure why I’m telling you how to play. You see, the game creators made an awesome short video that sums it up perfectly. You can watch it here.

There is a lot of absurdity across the cards which, as a family of fans of the asdfmovies, we really enjoy. I know they are probably too young for them, but my three boys stumbled across the cartoons and laugh out loud at the skits. Our smart speakers will also often be blaring out the ‘Muffin Song’, as well as ‘Everybody Do the Flop’, ‘I Like Trains’, ‘Mine Turtle’ and ‘Beep, Beep I’m a Sheep’. All equally ridiculously catchy and annoying! You will see what I mean if you watch our unboxing of the Kickstarter edition over on YouTube.

The recommended age is 13+ and unquestionably this is mostly down to the themes of some of the cards rather than a reflection of the complexity of the game. There needs to be comprehension and interpretation of the cards too. If you don’t mind your children seeing the odd emoticon stabbing on a card, 10+ would be my recommendation. I hasten to add, the violence is akin to the sort of thing you would see in the Itchy & Scratchy show on the Simpsons. As it is in line outline it feels watered down. I really don’t think this game will encourage young people to start blowing up turtles!

It is an unpredictable game. While you may attempt strategy, the chaotic gameplay will shake up your plans like someone trying to get the dregs out of a glass ketchup bottle. I wouldn’t be surprised if one of the cards left you with a lap full of tomato ketchup – it really is that offbeat!

This unpredictability is also reflected in the play time. Literally someone could win in two rounds, or you could be playing for over an hour in an epic battle of card laying. With two players the game is a little lacking and it is much easier to scheme a victory. Add more players into the mix and winning is tricky. The moment you announce its Muffin Time, you basically stick a target to your forehead. From this point all other players will try to mix up the number of cards in your hand. For obvious reasons, this prolongs the game time inexplicably. Even if you have counter cards, playing them reduces your hand below ten.

This erratic game time won’t appeal to everyone. So some people might want to set a timer and agree that if no one wins before it goes off, the player closest to ten cards wins. 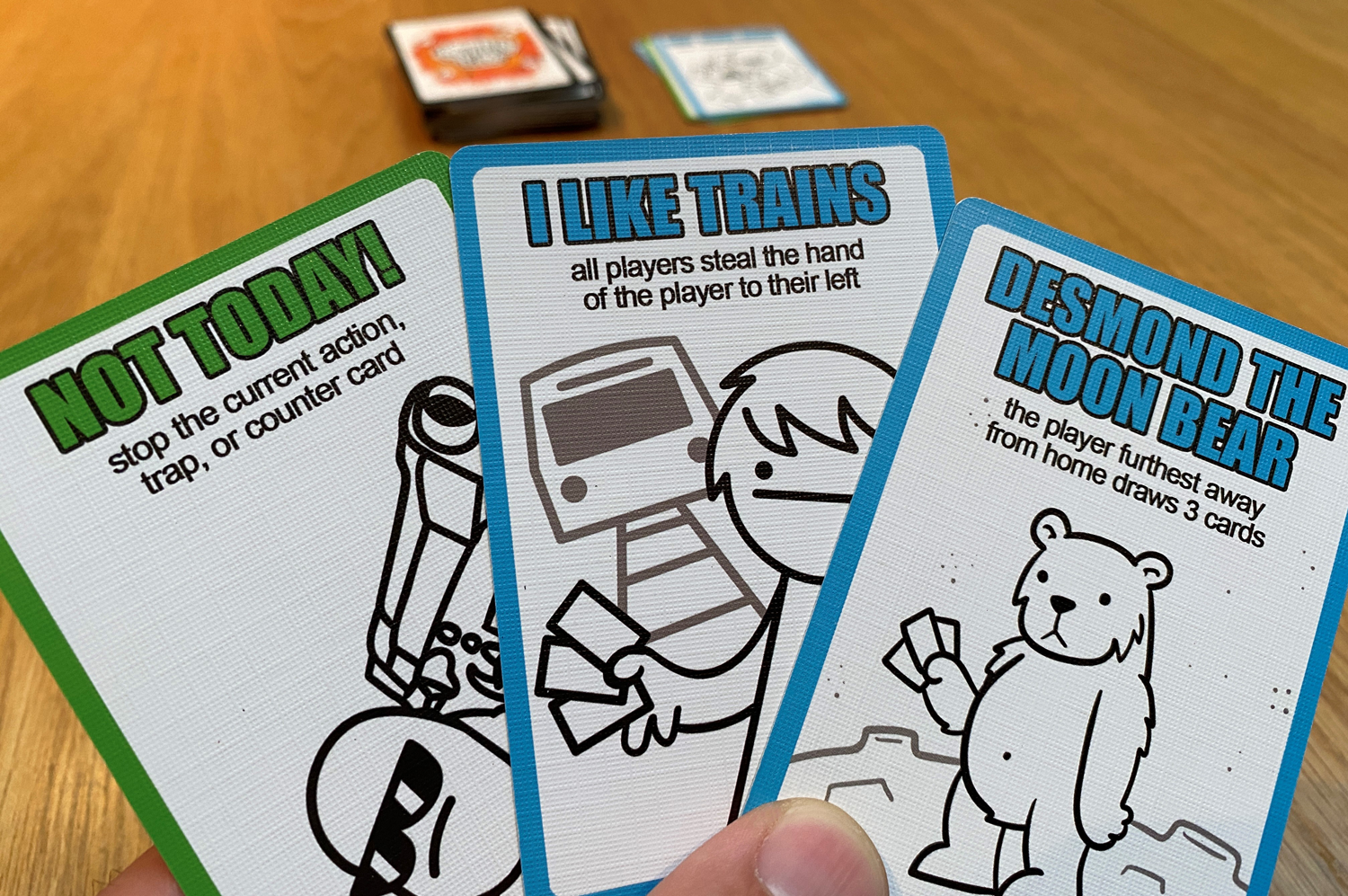 Well, I backed this on Kickstarter so I have got a pretty swish version. I’m not bragging but mine came with a holographic box, 40 extra cards, 10 of which are holographic, a Mr Muffin plushie, pin badge and playmat. I like all these extras a lot. The additional cards are nice, but the rest of the Kickstarter exclusives are all very superficial. Honestly, the standard version will still bring a whole heap of tumultuous fun. I also ordered two expansion packs: the Rainbow Pack and the Pie Flavour Pack, each with 40 additional cards. Although not essential, if these come to retail I would recommend obtaining them. These 80 additional cards are very handy to keep things fresh and different.

The cards themselves are on a nice linen stock. The artwork and wording is tremendously entertaining and really adds to the gameplay. The box is bigger than it needs to be for a deck of cards. If your gifting this as a present you’ll be pleased, if your storage is at capacity you might not! I can see plenty of copies of this one exchanging hands at Christmas! Wow, sorry, I just said the C word in July! 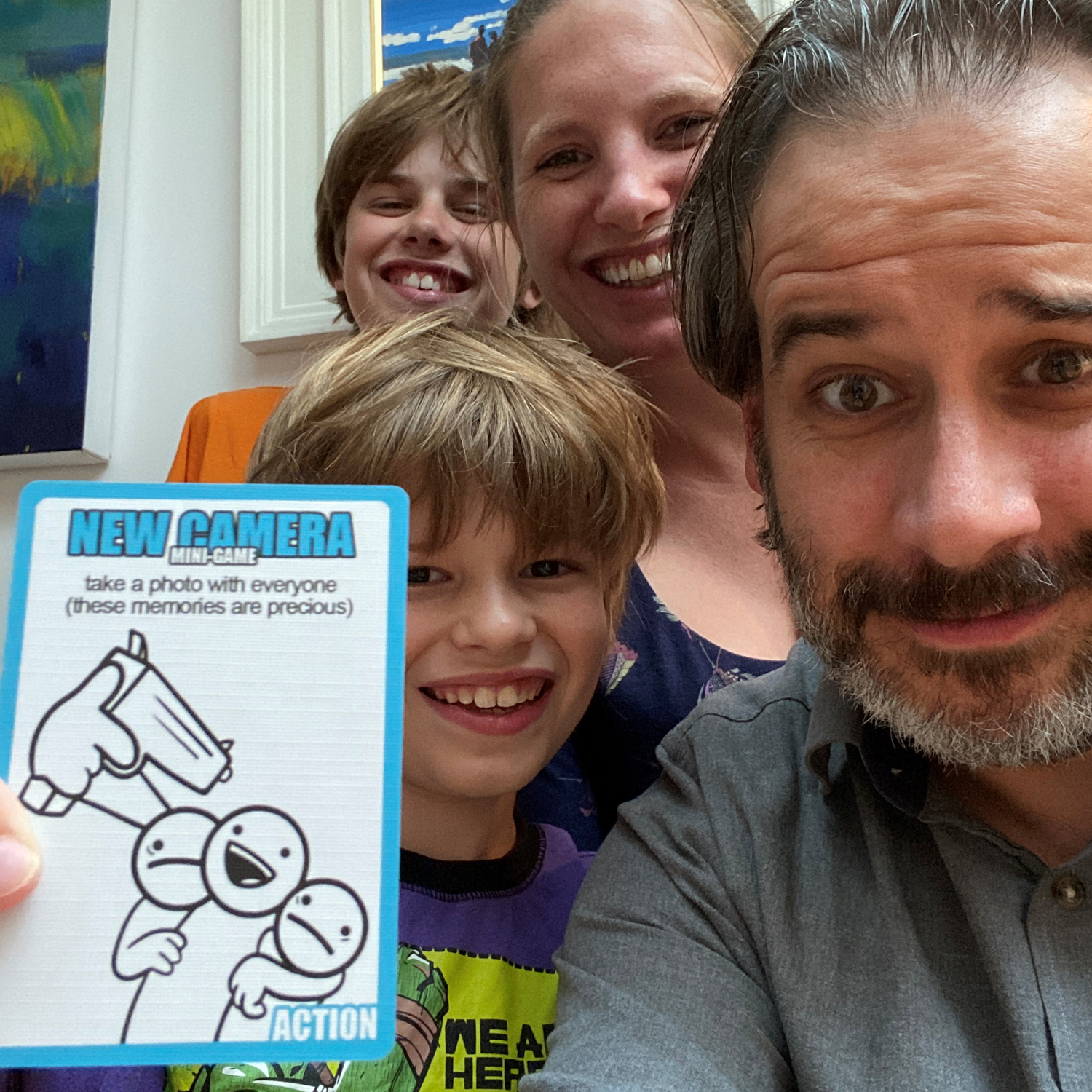 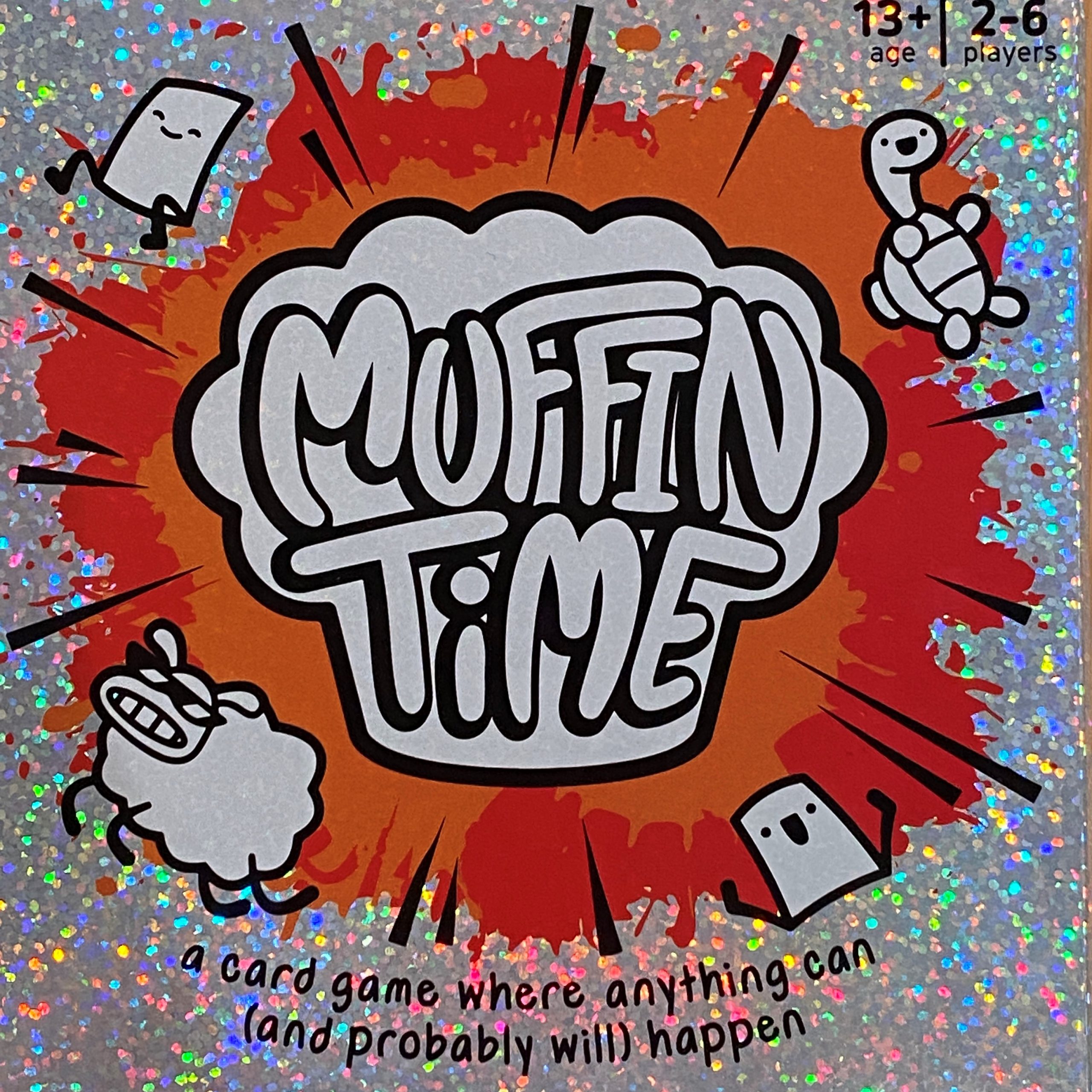 There are many card games that have similar elements to Muffin Time. Fluxx, has similar chaotic rule changes, Exploding Kittens and Uno have similar ‘take that’ mechanics that thwart your opponents. And, while it is fair to draw comparisons to these (and others), Muffin Time certainly offers something different. Mostly in the amusing art and ways that the asdfmovie characters are translated into the gameplay. The level of chaos and wackiness is currently unrivalled.

It is quick to learn and each card states what it does.  It is therefore ideal to play with non-gamers and more seasoned board gamers alike. It’s a party game that can translate to game nights. This adaptability alone, makes Muffin Time a worthy addition to your collection.

I will add, although it is anarchic fun, tactics do come into play. These have to be coupled with a reactive strategy that changes with the game. You also have to read cards carefully as their usefulness may not be apparent unless you interpret them correctly. To this end the rules state that if something isn’t covered in the rules, players should ‘argue about it until a majority of players agree on an outcome, try not to resort to violence’. Which gives a good account of the vibe of Muffin Time.

What else can I say, I like trains! And I really like Muffin Time! Now I’m gonna die, die, die.

The dark humour and morose undertones will not be for everyone, but if you are a fan of asdfmovies or don’t mind some mild bonkers violence and suicidal muffins this game is a whole heap of fun that you will keep returning to.

If you already own Muffin Time and enjoy it, or are looking for other inspiration, you might also like these similar games:

The images in this review are from the Kickstarter package and will differ from the retail version now available. For clarity. We don’t get paid for our reviews. We purchased this game with our own money, this has not affected our review in any way.