Advert: this game was gifted by Kosmos Games, this has not affected our opinion.

Back in November 2020 I made the two player card game Lost Cities my game of the month. I still really enjoy it and actually just writing its name makes me want to get the clever card game to the table again. Rewind a little bit further and you will see that in February 2020, I interviewed the designer Reiner Knizia. He was a fascinating character and a brilliant interviewee. Fast forward and you will know I have fallen head over heels in love with the roll and write Ganz Schön Clever. With all this in mind, imagine my excitement when I heard that Knizia was revisiting the Lost Cities franchise to create a roll and write version for Kosmos. If you can’t imagine my excitement, it was like a small child waiting in the queue of an ice cream van. That was my level of excitement.

So does it live up to my own expectations? Read on to find out! 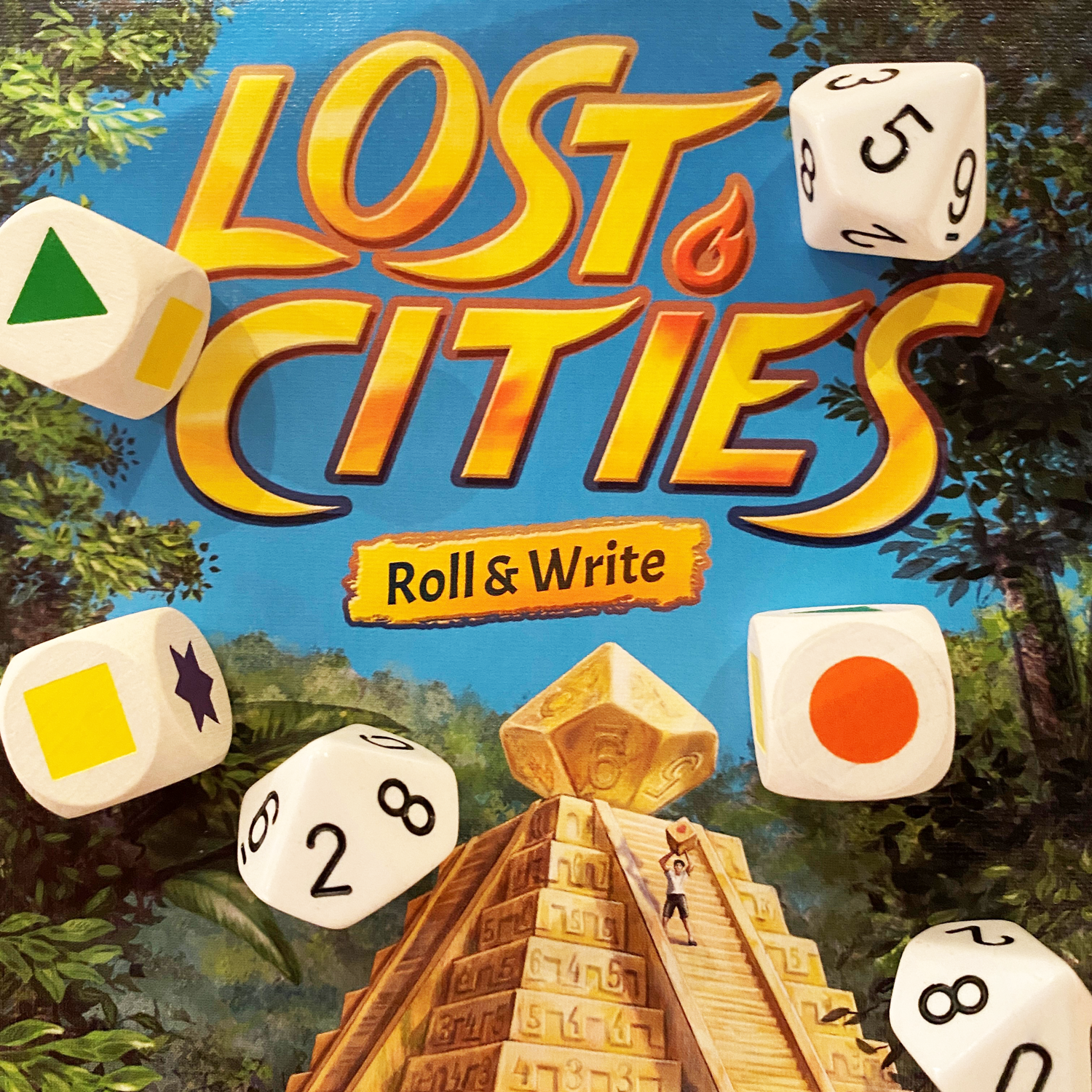 To set up, give each of the two to five players a pen (not included) and a score sheet. A dice tray is optional. You are now ready to play Lost Cities Roll and Write! If you know how to play that is. Read on to find out if you don’t already know!

Players will take it in turn to roll the six custom dice. The active player will choose one numbered dice and one coloured dice to play. These colours correspond with the colours on the score sheet which in turn represent the explorations you will embark on. Inactive players can choose from the remaining dice but are under no obligation to take any.

Expeditions are expensive so you need to ensure you embark on the right journeys to maximise points. You must journey up the column by using either the same or higher number than the previous number in a column. Thus at the start of a game low numbers are best. A zero at the start of your column will double your points but a zero can also be used as a ten at the top of your column.

Points in Lost Cities Roll & Write vary depending on how high you venture up each column. If you don’t venture far enough you could be in negative points, and negative points can be doubled too! There is a band towards the top of the columns called a ‘bridge’. The first player to pass a bridge gains 20 bonus points.

As you progress up each column you will unlock other bonuses, an arrow will allow you to write a number of your choice in any column. An urn is a treasure and these have their own tracker to the right of the score pad. There is also a final column for when an active player cannot take, or chooses not to take, dice on their turn. If you are the first to reach the top of this tracker you will lose all points from exhaustion.

The game ends when all bridges have been crossed or all players suffer from exhaustion. Scores are tallied and the winner is announced. 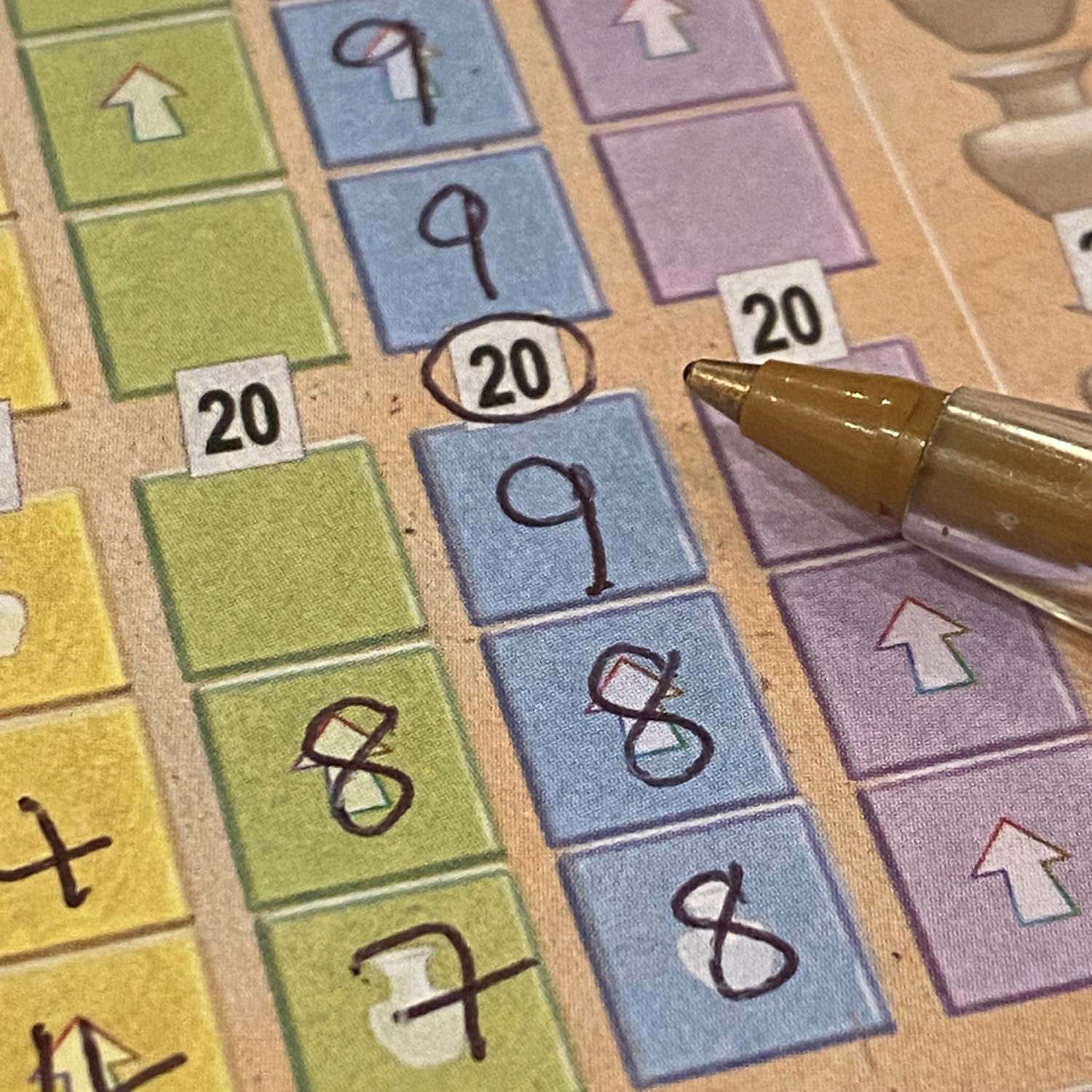 You probably know by now I don’t do a lot of solo gaming. Yet I was still taken aback that Lost Cities Roll & Write didn’t come with a solo variant out of the box as so many do.

So here is a solo variant I have come up with, feel free to try it and refine it as you see fit. Tinker with it as much as you want, after all I am not the legendary Knizia!

As the active player roll 6 dice and pick 2, as a passive player roll 4 and choose whether to pick any dice to recreate the normal game. If you choose not to take the dice as an active player, cross of two dice in the final column rather than the normal one until you reach the bridge. After the bridge, cross off the last three dice one at a time. The game ends when you are exhausted or you have passed any four of the bridges. Final scoring is the same. You are playing to beat your previous high score. I would love to work out a table to measure yourself against, but like I said, I am not the legendary Knizia!

Candidly, I wouldn’t buy it to play solo on the back of my variant! I would like to say a big thank you though to my wife, and Tora (aka @favouritefoe on Instagram) for playtesting my solo ideas. Tora runs www.favouritefoe.com – pay it a visit!

I think it is fair to draw comparisons with Qwixx in the progression along a row, or in this instance, up a column. Both have a luck-based element that is not particularly mitigated, but does give you a choice. It also makes you take a gamble when starting expeditions and with that, are elements of push your luck.

It is probably not fair however, to draw comparisons with the other Lost Cities games in the franchise. It would struggle to stand shoulder to shoulder with them. Don’t get me wrong, you can tell it is a family member, but it is probably a younger cousin rather than a sibling. It is lighter than it’s relatives and different. I like the familiarity and the differences though.

Lost Cities Roll & Write does not quite offer the climatic end of game that the original card game often offers, or the hate drafting if that is your style. It is, like many in the genre, more of a solitaire experience. Which is why I guess, so many people might expect a solo variant.

Choosing dice in this game is often a quandary. Starting new expeditions comes with a risk and when doubling points, can come with big rewards. Equally playing a slightly higher dice than you would like in some columns can be a necessary evil over chalking off another step on the exhaustion track. This uncomfortable balance brings the game alive, although the luck element can sway this into being even more uncomfortable. 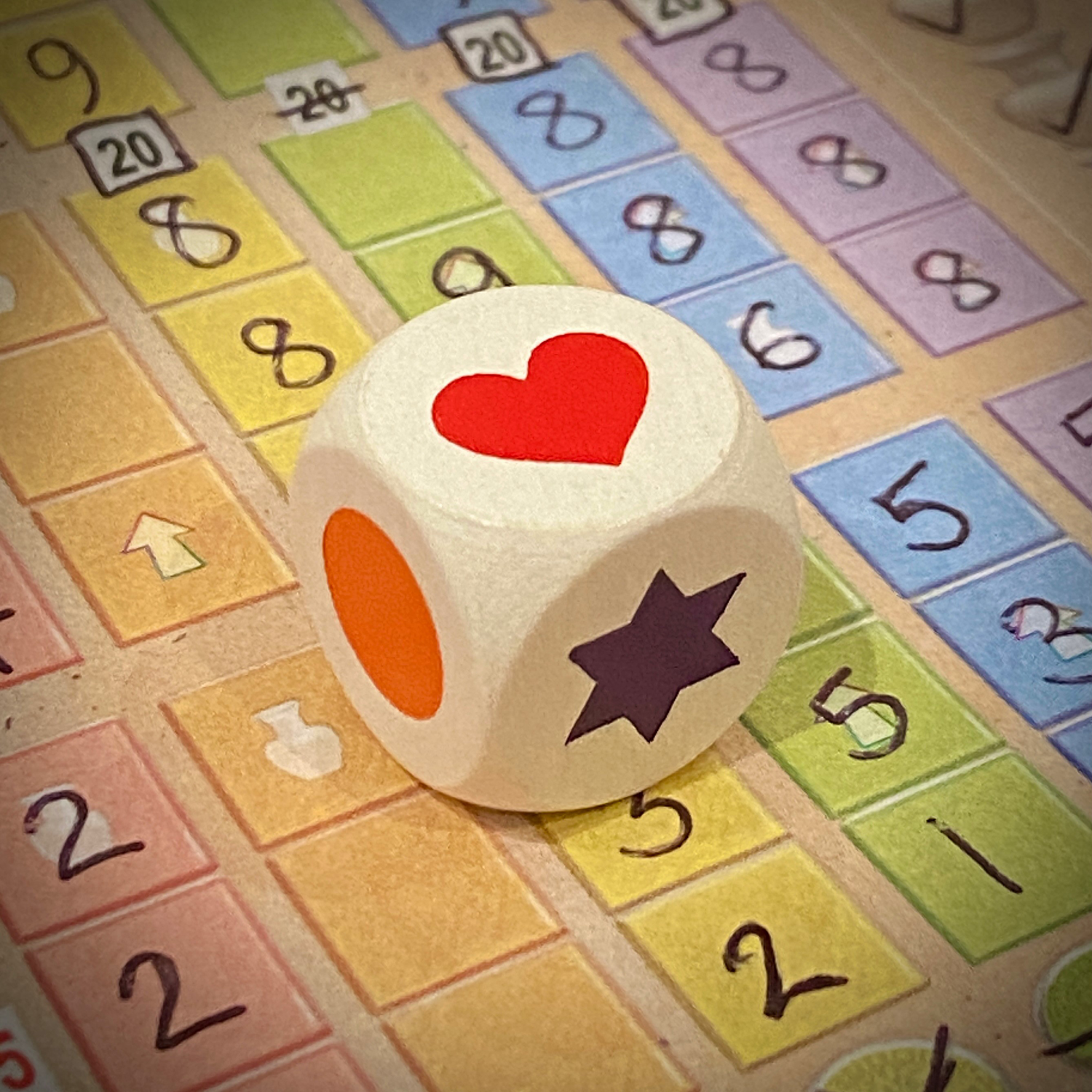 The rulebook is pretty clear. I did have to refer back to it a few times. What I cannot work out is whether that was me approaching the game in an over familiar way, my mood when learning or what. They seem pretty clear now I revisit them so can only assume it was me!

The sheets for recording progress are equally clear. Form definitely follows function here, and the beautiful artwork that wows in the card game are a distant memory in this game. There could be room for a little more ambience on these although the rainbow pad is still cheery and nice to stare at. The pattern dice are pretty and I do appreciate that colours are also represented by simple symbols to aid those with colour vision deficiency.

Minor gripe alert: there are no pens in the box. I know everyone has pens in their house, but I do like it when pens or pencils are included, it means I can grab the box and go when taking a game out and about.  So that for me is a bit of a shame, not an unsurmountable one, but a negative all the same. I also wonder whether this genre should start to embrace wipe clean boards rather than coming with a pad of paper. 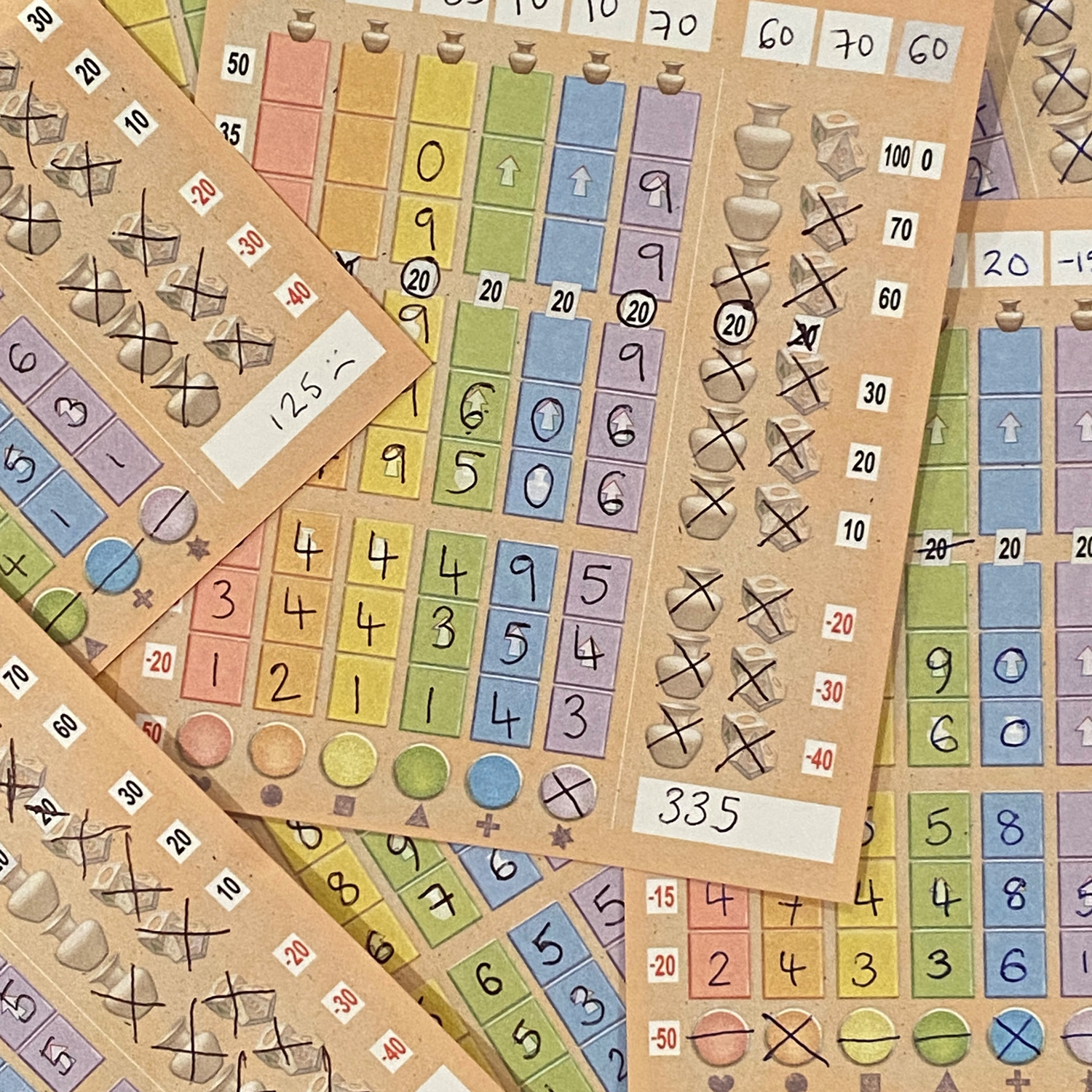 Lost Cities Roll & Write does offer things to think about, gambles to take, but you aren’t going to be as invested as you might be in other bigger games. Of course, that’s okay if it fits your mood.

The weight and play time are nicely balanced and at the lighter end of the roll/flip and write genre. This makes it a good, quick game for moments like, before dinner, or unwinding after a busy day. It is also in a small enough box to take on your travels. In the right situation with the right expectations, this is a good game.

I haven’t fallen head over heels in love with this iteration like I did with the original card game. However, this is a credible roll and write and worth your consideration all the same.

Lost Cities Roll & Write is a very pleasant light gaming experience. You can tell it is part of the Lost Cities family but is a very different experience from the others I have played, but that doesn’t stop it being a fun game in its own right.

If you already own Lost Cities Roll & Write and enjoy it, or are looking for other inspiration, you might also like these similar games:

Buy Lost Cities Roll & Write
from Out of Town Games 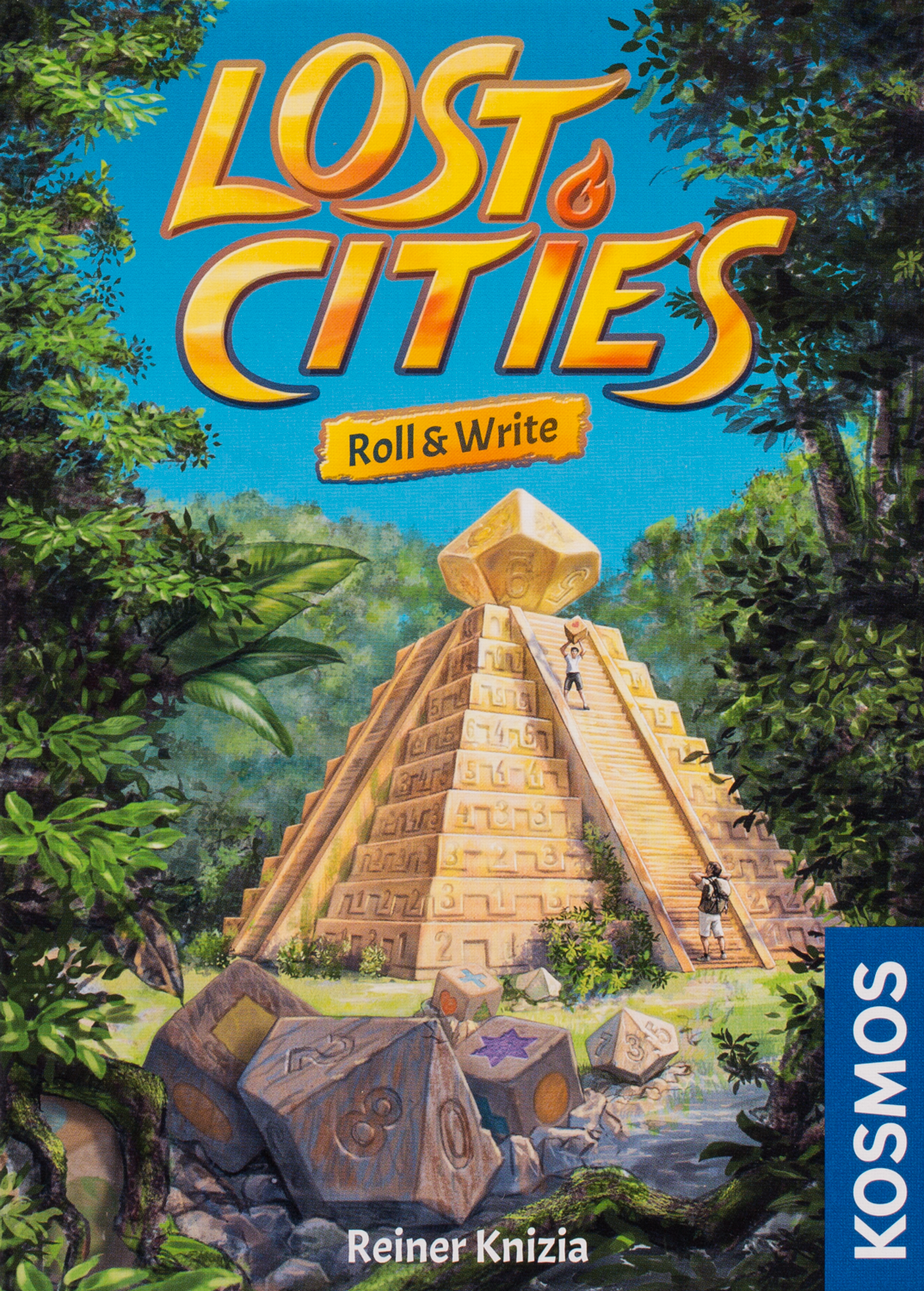 For clarity. We don’t get paid for our reviews. We were kindly gifted this game by Kosmos Games, this has not affected our review in any way.