I have been captivated by the myth of the Archaens for some time. An ancient civilisation that reputedly could control the Earth’s core elements. My fascination and exploration has lead me here, to a Forbidden Island. Looming upwards before me is a Verdigris gate set in a stone arch. In the distance I can see some of my fellow explorers at their drop off points.

I stand in wonderment thinking I have truly made it as an explorer. As I admire my matching green jacket and slacks I hear a distant rumbling. The earth starts to shake all around me. I realise that not only was the mythical civilisation real, so too were the rumours that they had managed to booby trap the island. The comms crackle to life, all of us are in agreement. We need to shore up the sinking island, find the treasure and all get off this island as quick as we can before we are fish food.

If that’s captured your imagination, you will probably want to read more of my review of Forbidden Island, a family co-operative game for 2-4 players. 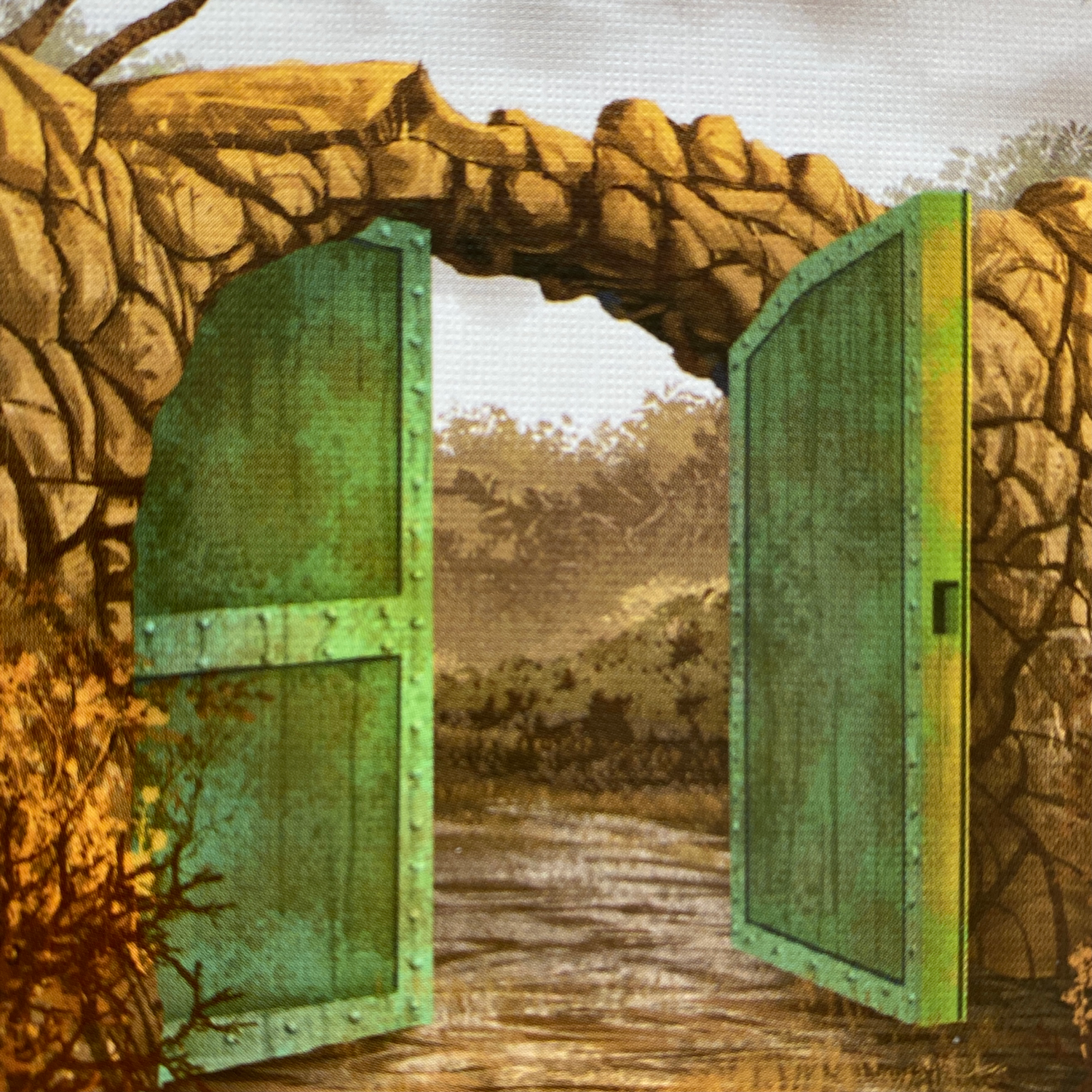 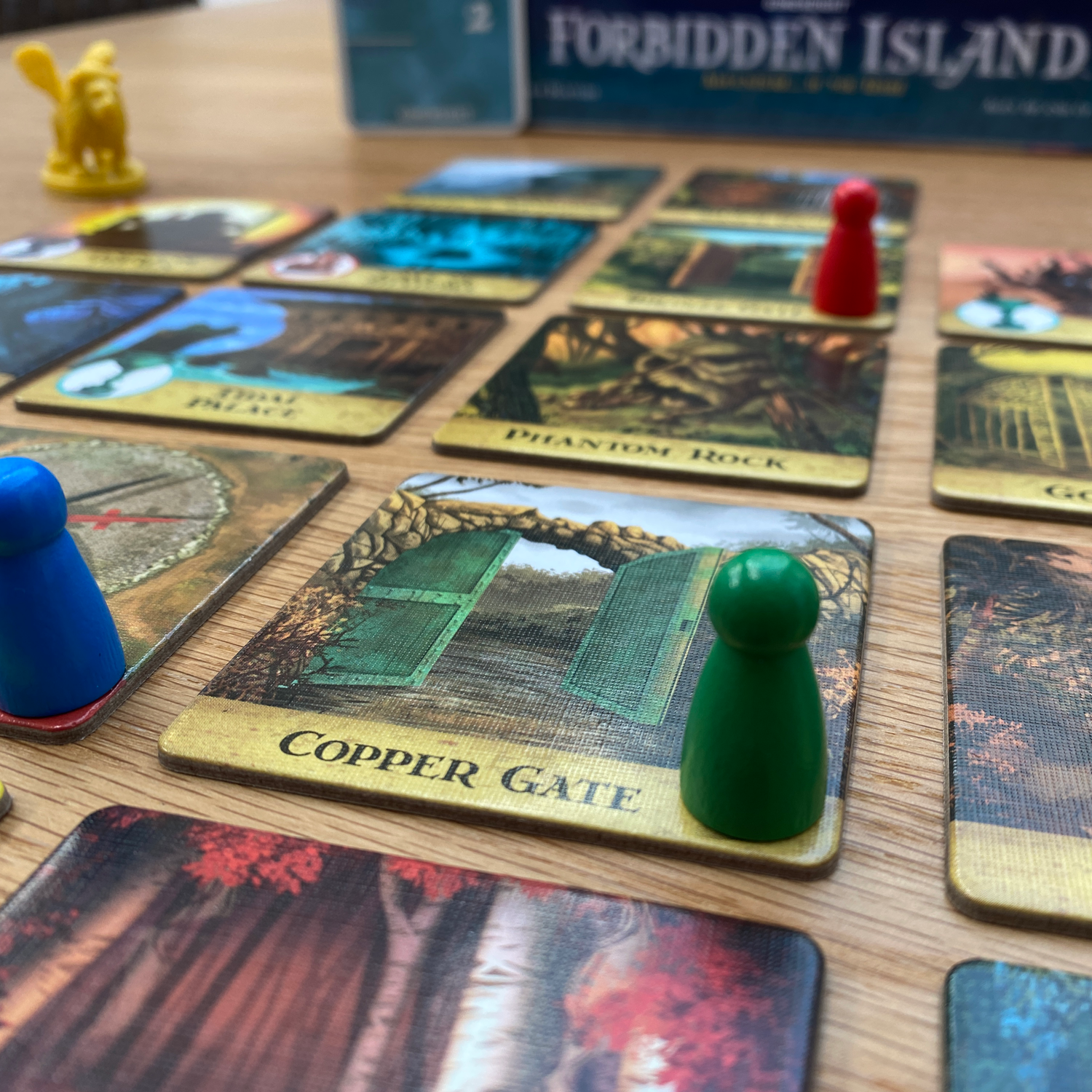 To win the game players will need to work together to collect the four treasures from the island and escape before the island floods. The co-operative nature of the game means that either you win as a team, or you lose to the game.

The 24 tiles are set up in a cross-like formation. Each player is assigned a pawn at random which grants them special abilities. On your turn you take three actions from any of the four available. These are: movement; shore up a sinking tile, give a treasure card to another player (if on the same tile), or capture a treasure (on specific squares only).

After this, you will draw two Treasure cards, you need four matching Treasure cards to capture the corresponding treasure. Throughout the game ‘Waters Rise’ cards are revealed which intensify the flooding and sinking of the island. Light relief comes from special action cards that can help you out in your moment of need.

The final part of your turn is to draw Flood cards. These cause a tile to be flipped over to its flooded side. You will need to shore these up otherwise if they get drawn again they will sink and be removed from the game.

Each treasure has two tiles whereby you can capture it by cashing in the four corresponding treasure cards.

Once you have captured all four treasures, all players must get to the Fool’s Landing tile and use a helicopter lift card to leave the island and claim the win.

You all lose if both of the tiles where you can capture a treasure sink before you have secured it. If Fool’s Landing sinks or the water level raises too high you will also lose. And finally victory is lost if any tile sinks with a pawn on it, that could not swim to an adjacent tile.

Once you get the hang of it you can also adjust the difficulty. 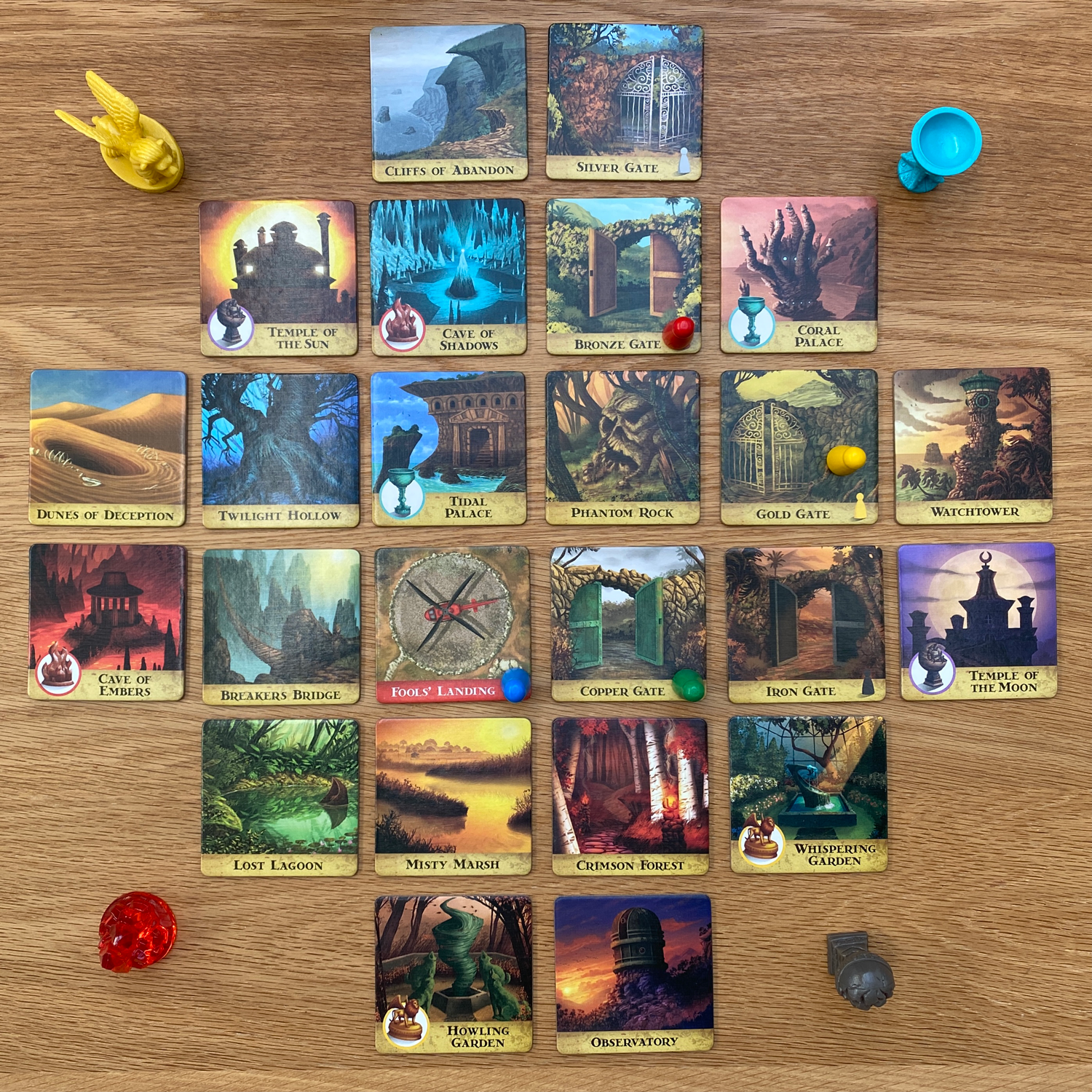 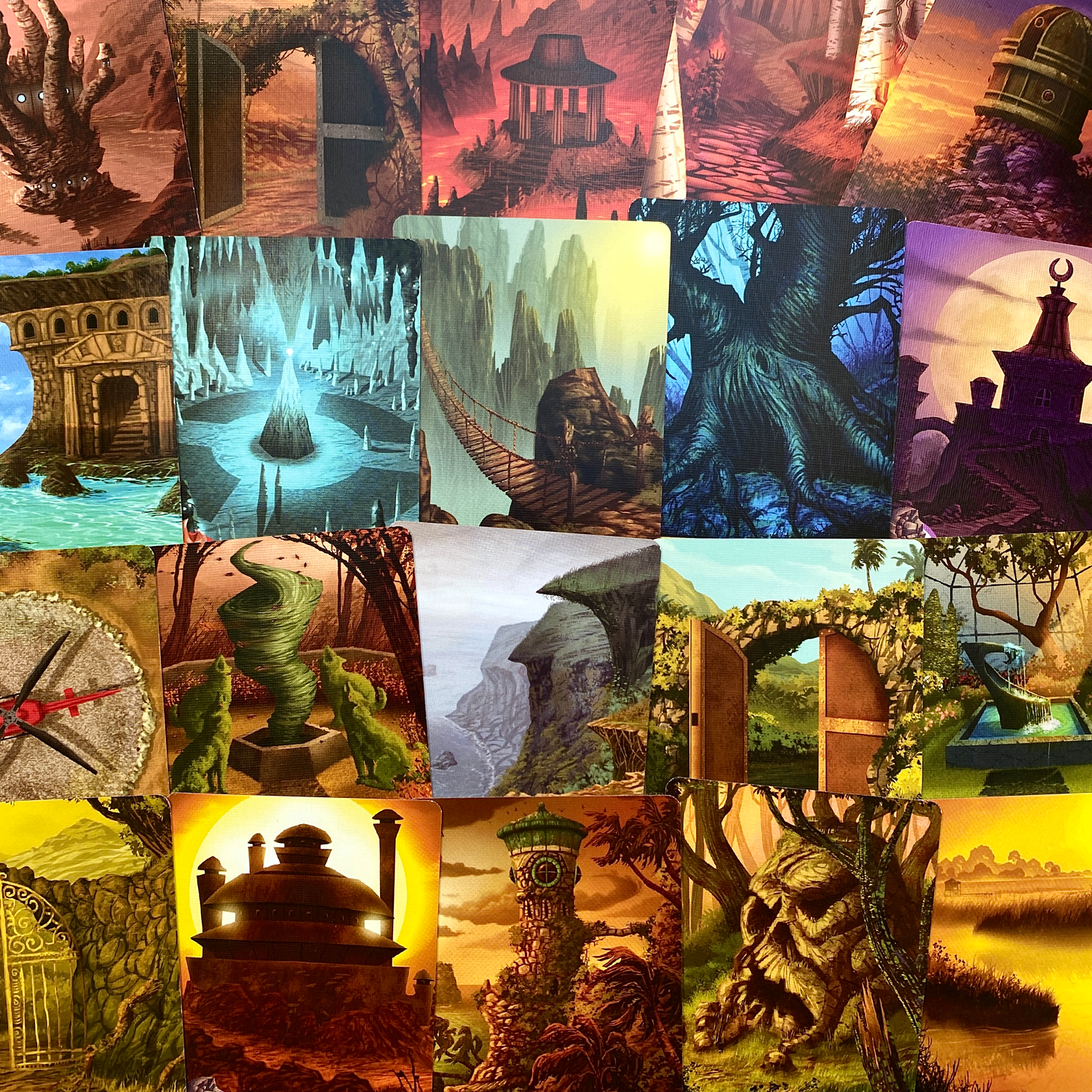 Forbidden Island is a great family game. It can accommodate younger players below the recommended age of 10 because it is co-operative. You can gently suggest what the little ones could do. Hopefully they will be gently coerced into following the lead of the other players ,while still making the decisions on their own. This brings me on nicely to a common trait that should actively be avoided when playing co-operative games. It may be the case that someone at the table will adopt the alpha player role. Try to avoid this by having broader discussions and letting everyone make suggestions, particularly younger members at the table. Be sure to encourage ideas regardless of their merit but build upon them and be willing to occasionally see what you think is the wrong move be made.

The lovely thing is that Forbidden Island offers up some impossible decisions juxtaposed with some really easy decisions. That is to say, what you should do is sometimes blatantly obvious and other times you know you will have to make a sacrifice.

The different abilities of the players will make a difference and alter your style of play as a result. This, combined with the modular board and adjustable difficulty allow plenty of replayability.

While winning a co-operative game gives a shared delight to all, losing is quite a different experience. If you really invest in the game and lose the result can be crushing. In competitive games there will be a victor, and most people can get some enjoyment from their joy of winning. In a co-operative game, when you lose, everyone is a little deflated. The good thing about Forbidden Island is that you will want to try again, probably immediately!

If you have played other co-operative games be aware this is an entry level option, from here you might progress to one of the game’s sequels, and then to the various iterations of Pandemic, also designed by Matt Leacock. They all use a very similar mechanic so feel familiar but the difficulty certainly ramps up through the titles. 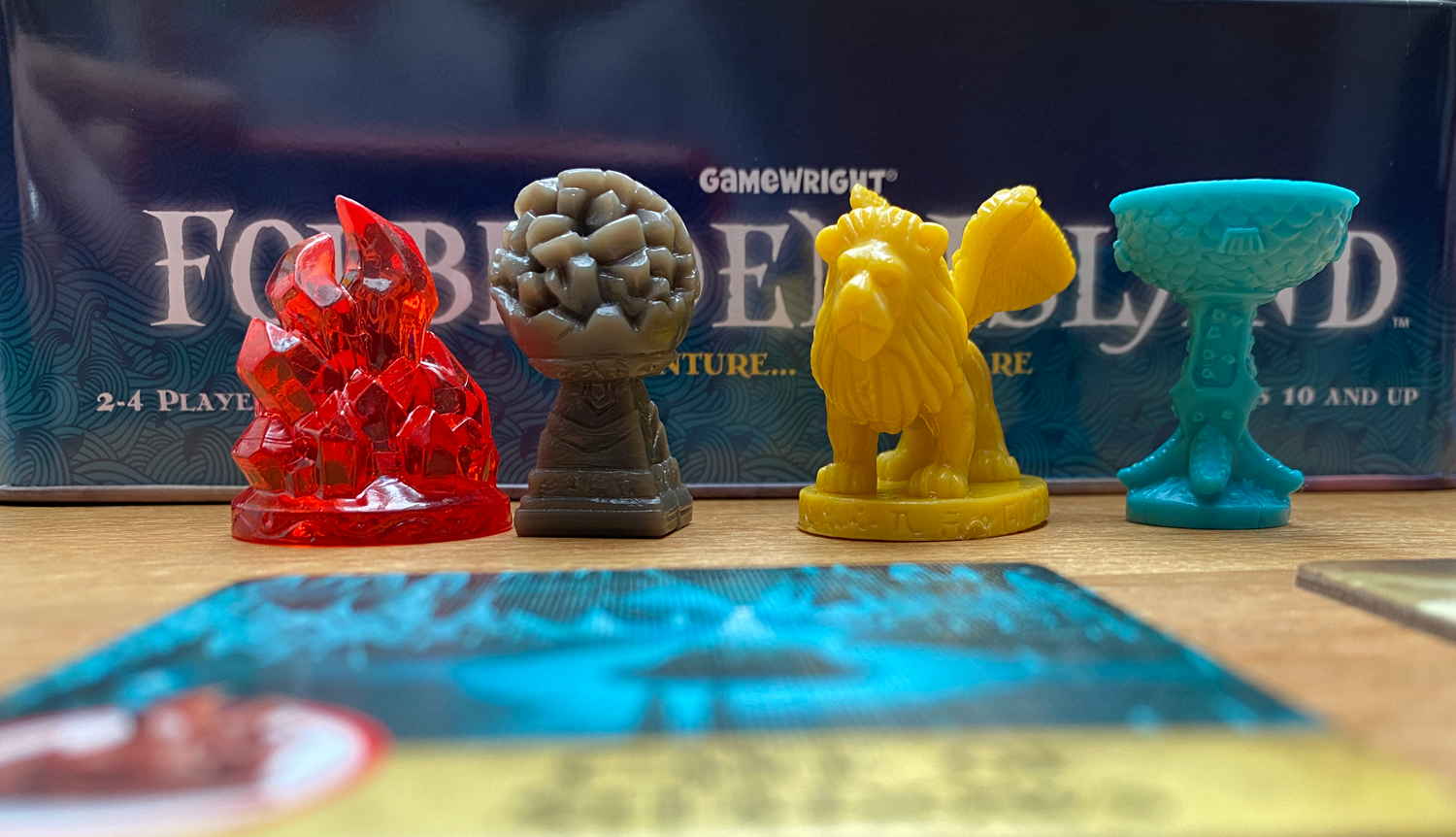 The rules are clear and concise. The wooden player pawns are a bit bland and in an age of minis and meeples these seem a little mass market. In contrast the treasure tokens are pretty darn good.

The tiles and matching cards have some brilliant and beautiful artwork by C.B. Canga. The Water’s Rise cards are mediocre looking, but are functional and clear so it is certainly forgivable! The water level marker is similarly functional rather than a work of art, but again that is no bad thing in this instance.

The game comes in a tin. Call me old-fashioned, but I quite like a cardboard box. It all fits nicely inside, it’s  just a bit harder to stack on the shelf! 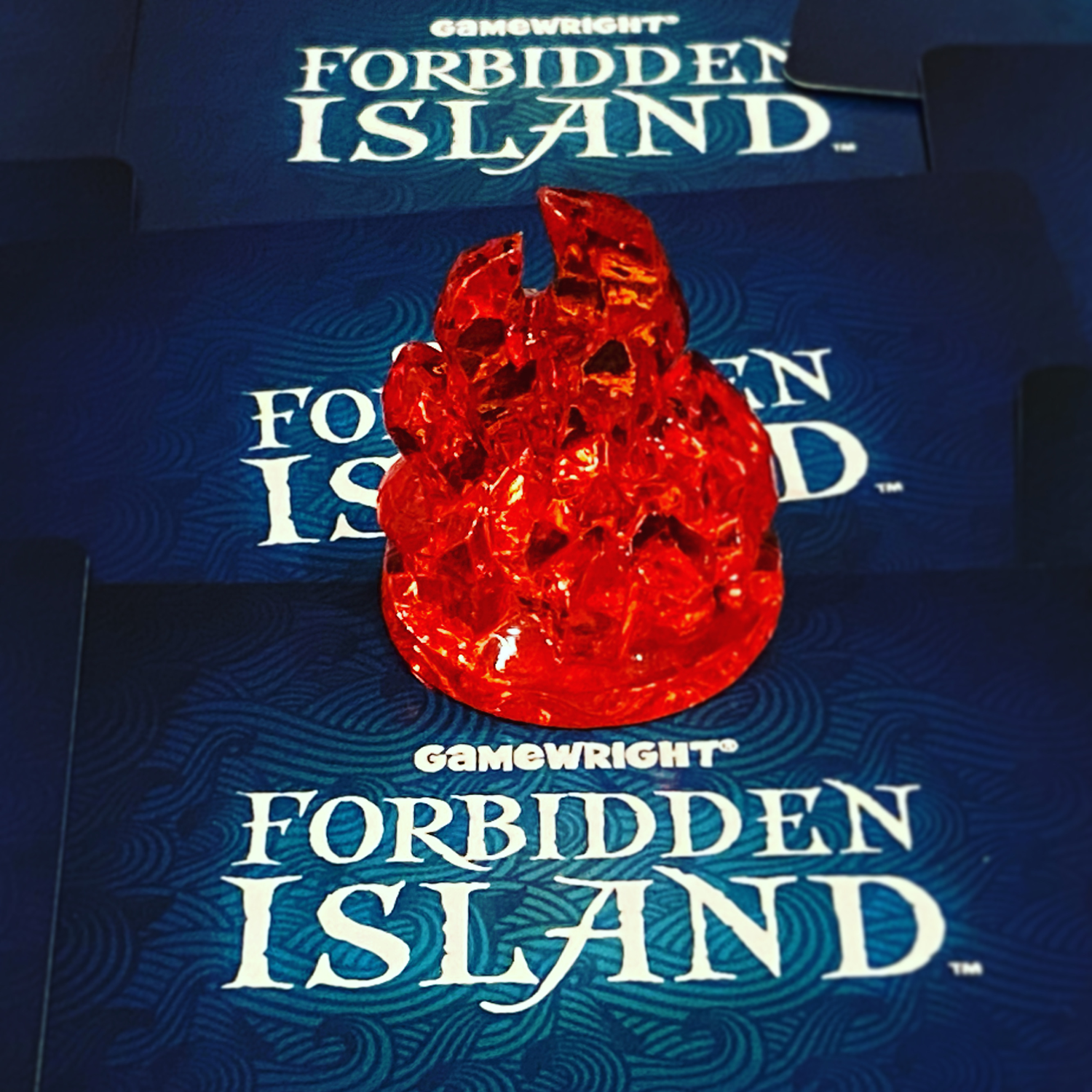 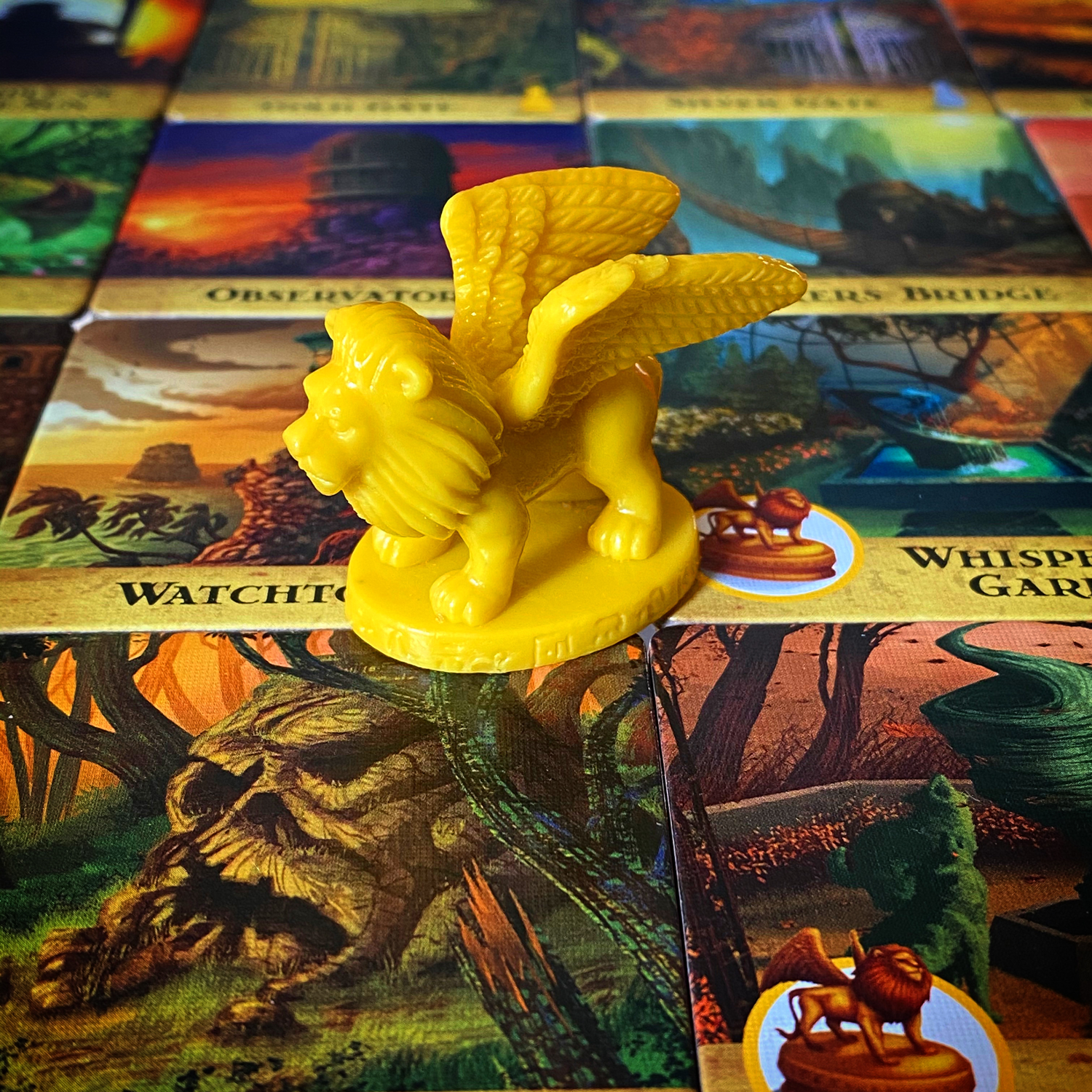 Max: “I like how the tiles disappear unless you save them.”

George: “I’m quite into co-operative games and is one of my favourite games to play. I like the names of the places like Phantom Rock and Temple of the Moon. It’s a good game.”

Harrison: “It’s got really cool artwork. The different abilities are good and I like the game in general.” 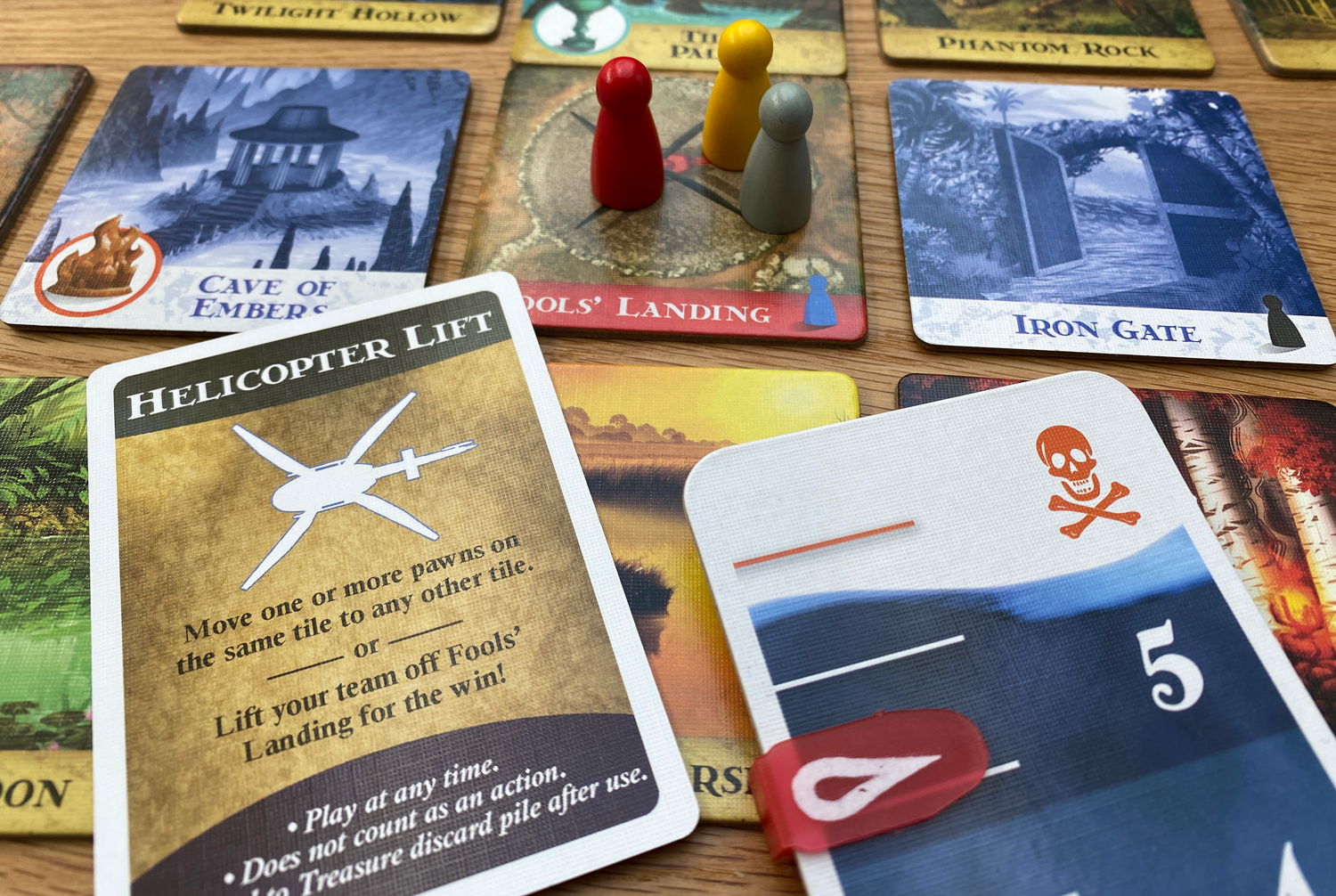 This is a beautifully balanced game. You will win, and you will lose, but it will always be close. So many of the games I have played have ended with the ‘just one more turn’ and we would have lost or won. This for me makes the game exciting.

If you have a super competitive family that need taming, games like Forbidden Island are brilliant. If you have that bad loser or worse, a bad winner in your household, a co-operative game will probably be a very good solution.

Co-operative games are interesting and if you haven’t tried one before, this is an excellent entry level game to ease you into the ‘all vs the game’ style of play. The designer Matt Leacock is well known for them and you can see why. If you are looking for a game for more experienced players you probably want to start with Pandemic by the same designer, or Flash Point.

This is a brilliant introduction to co-operative gaming whereby players work together to beat the game rather than each other. Cleverly balanced gameplay and plenty of tactical planning makes this game a hit. Be sure not to become the bossy alpha gamer though!

If you already own Forbidden Island and enjoy it, or are looking for other inspiration, you might also like these similar games:

Buy Forbidden Island
from Out Of Town Games