Have you ever wondered: is there anything that hasn’t been turned into a board game theme yet? I was contemplating this the other day after playing Daring Dustbunnies a game about balls of fluff avoiding getting sucked into a vacuum cleaner. It’s a niche theme that I think is fair to say has not been used as much as dinosaurs, dragons, cowboys or citybuilding. In that regard this has a unique place in the world of board games.

Daring Dustbunnies may have passed you by, but I was excited about it when I first saw it a year ago. When it won the Judges choice for Family Board Game of the Year at UKGE, I took the plunge and secured a copy of this quirky-themed game. 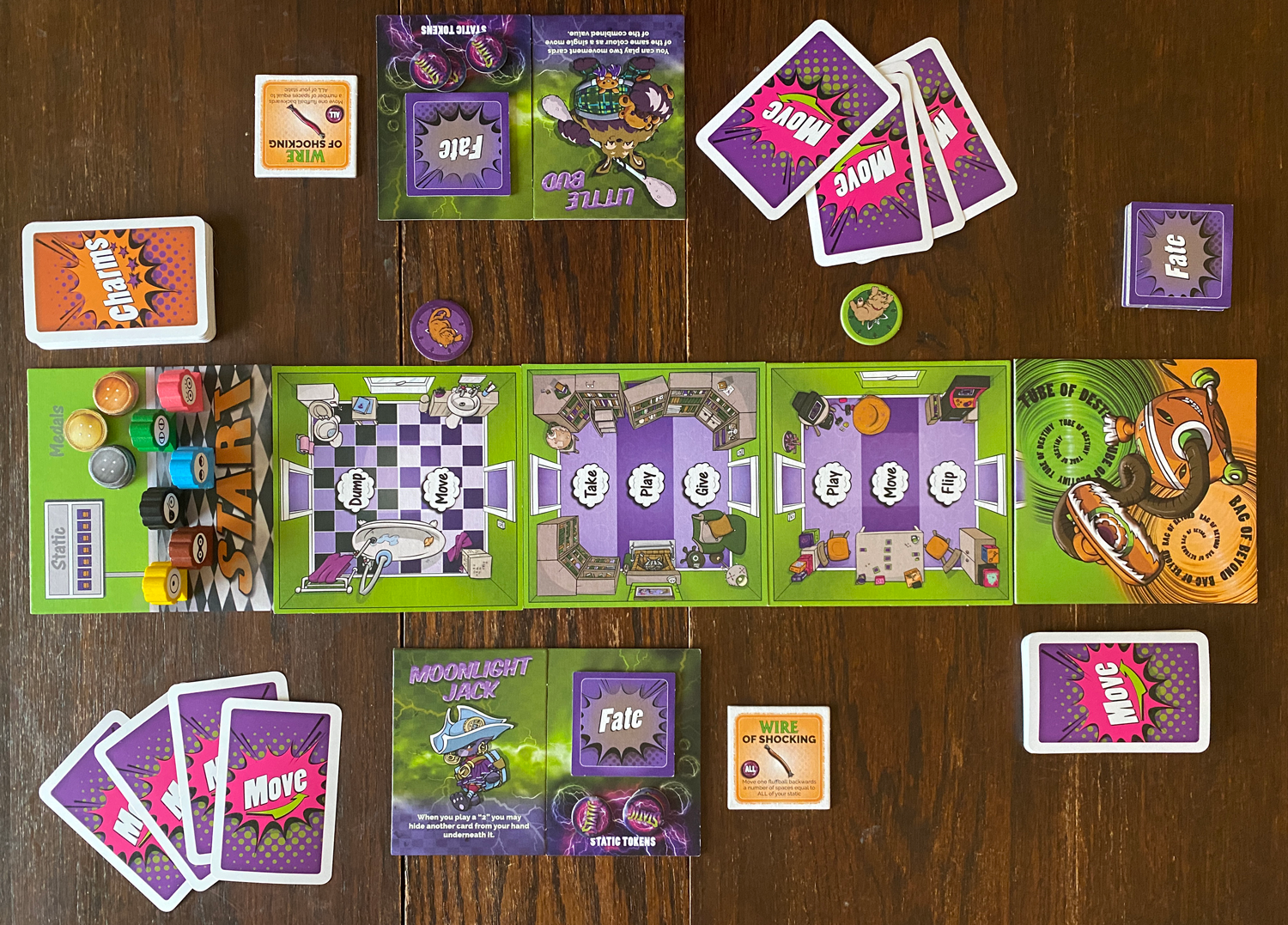 Setup varies for different player counts, but it is a breeze to unbox and start playing. First, randomly select a number of rooms equal to the number of players, plus one, i.e. for a three player game you would have four rooms. Append the start card, placing all coloured fluffballs here and add the vaccum cleaner end card. Place the cat and dog tokens beside their relevant rooms too. That’s the board all set up to play Daring Dustbunnies.

Distribute two character cards to each player, they will select one and have that in front of them face up. This will grant them a unique player power to use during the game. The card they don’t wish to use they place face down in front of them. Each player also gets a wire card. Allocate each player a Fate card, this is the colour of the Dustbunny they want to win this round! Finally, deal four cards to each player from the movement card deck. That’s it – easy-peasy! 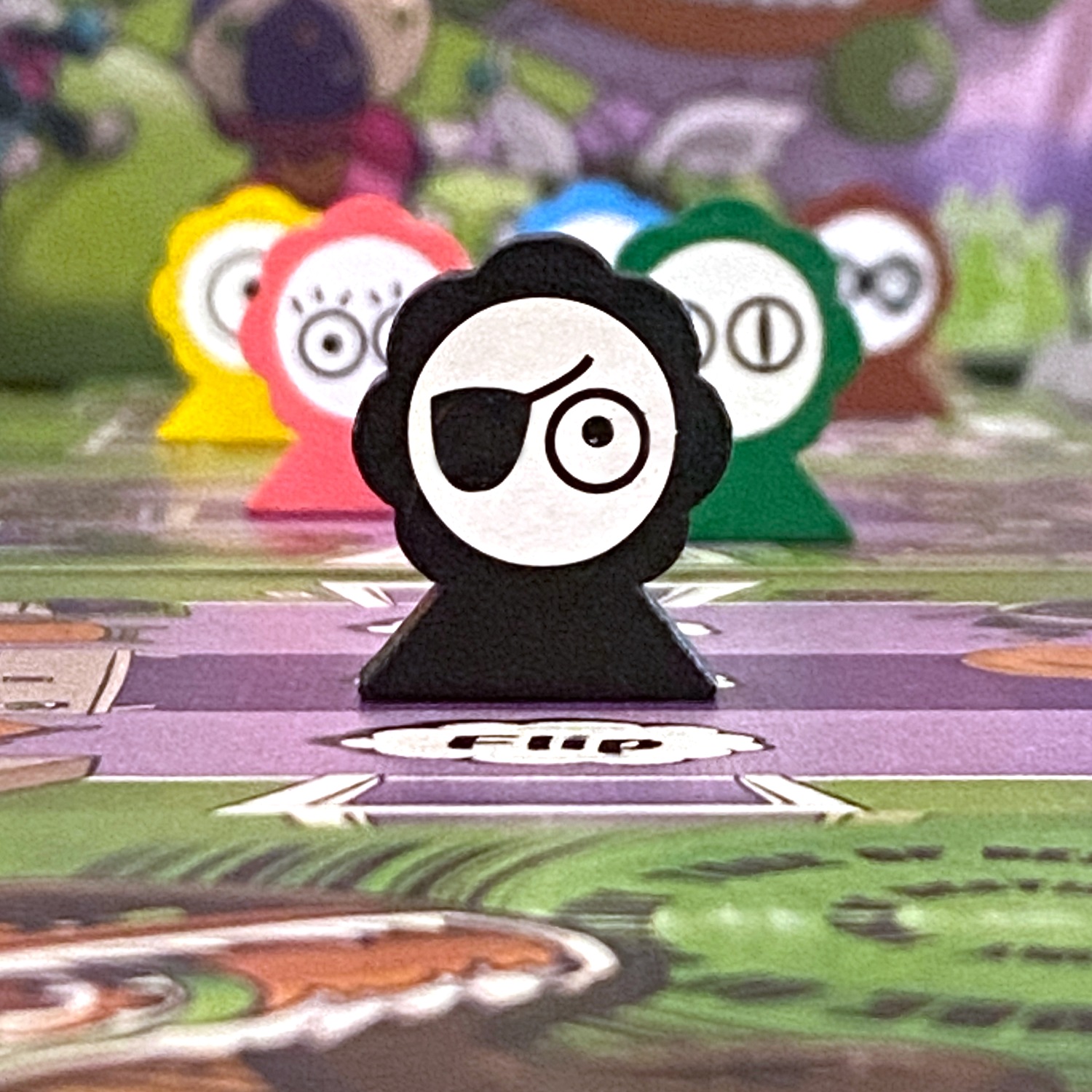 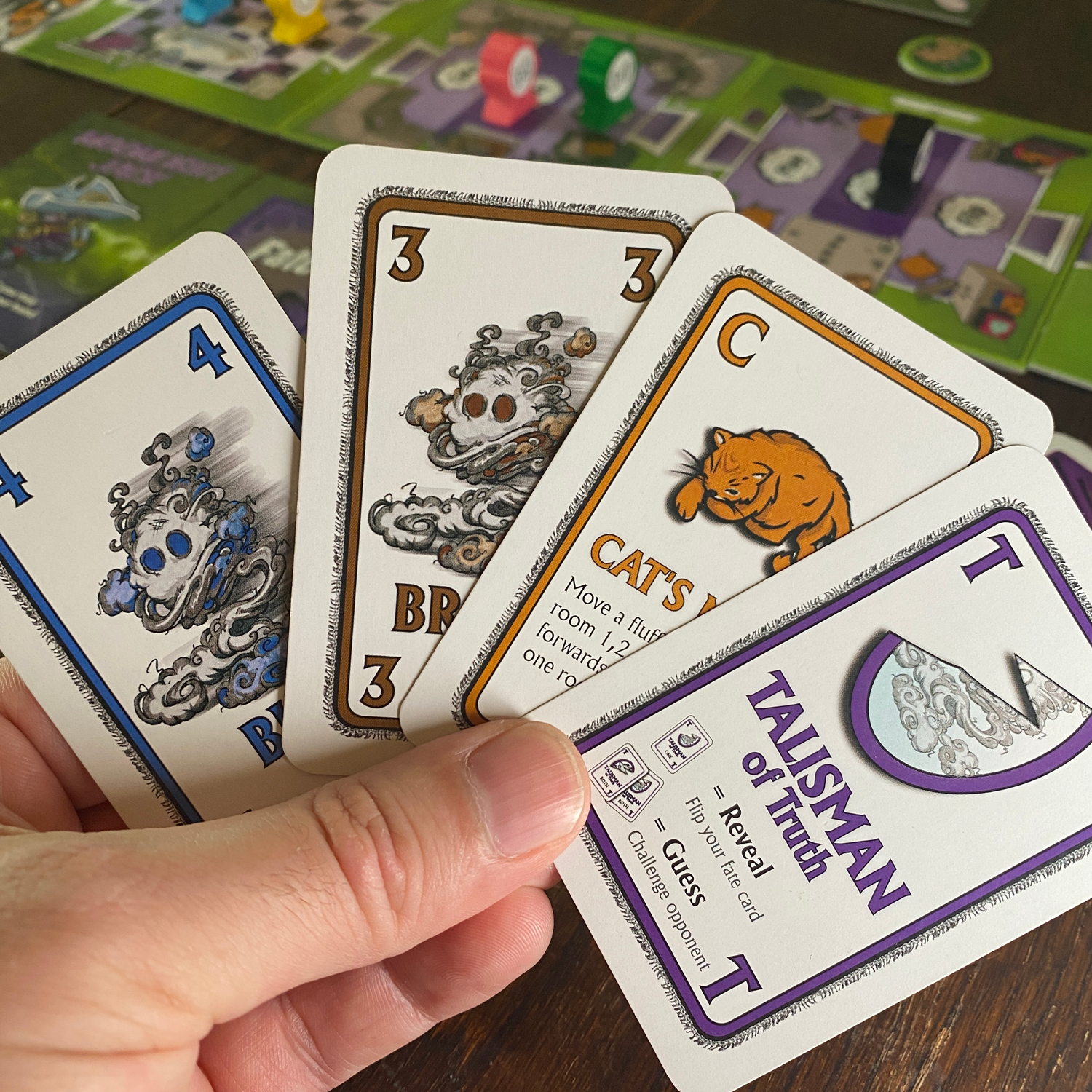 This two to five player game is played over three rounds. The aim of each round is to get your fluffball to be the closest to the vacuum cleaner without being sucked into it. The closest three Daring Dustbunnies will be awarded a gold, silver or bronze medal. The player with the most gold medals at the end of three rounds is the winner.

Each round a player will play a movement card, this will move a fluffball forward one to four spaces. If the space they move to has no other token on it, they carry out the action on that space. These actions are fairly self-explanatory and will generally involve a movement card. The possible actions are Take, Play, Give, Dump, Move and Flip. This can trigger more actions and they can cascade. For example, you may move a token onto a flip space, so the top card of the deck is turned over and the movement carried out, that moves another fluffball onto a Dump space so you discard a card from your hand and end your turn. If ever a token is already on a space you take a static token instead of the performing the action.

Unusually you do not draw back to four cards until you have gotten rid of them. Whenever you play your fourth card your turn ends and then you can redraw. You also take a Charm card at this point which grants you a special power. To activate these one-off bonuses you need to spend static charges.

As well as standard movement cards, there are Talisman of Truth cards. Played singularly, these force you to reveal the colour of your fate card. If played with another matching card as a pair, you can choose another player and guess their fate, guess correctly and your opponent must declare it! There is also a Cat and Dog card which moves a fluffball in the same room as it, one to four spaces forwards or backwards respectively.

There are abilities, powers and the Wire card that allows you to move backwards, handy if your fluffball has been sucked into the Tube of Despair. However, if the token has moved into the Bag of Beyond there is no coming back and what’s more if your Dustbunny is here you will lose all medals you have already collected!

A round ends and the medals awarded as soon as three conditions are met at the end of any players’ turn. These are that there is no Daring Dustbunnies on the start card, there is at least one in the tube or bag on the end card, and that none share the space with another. 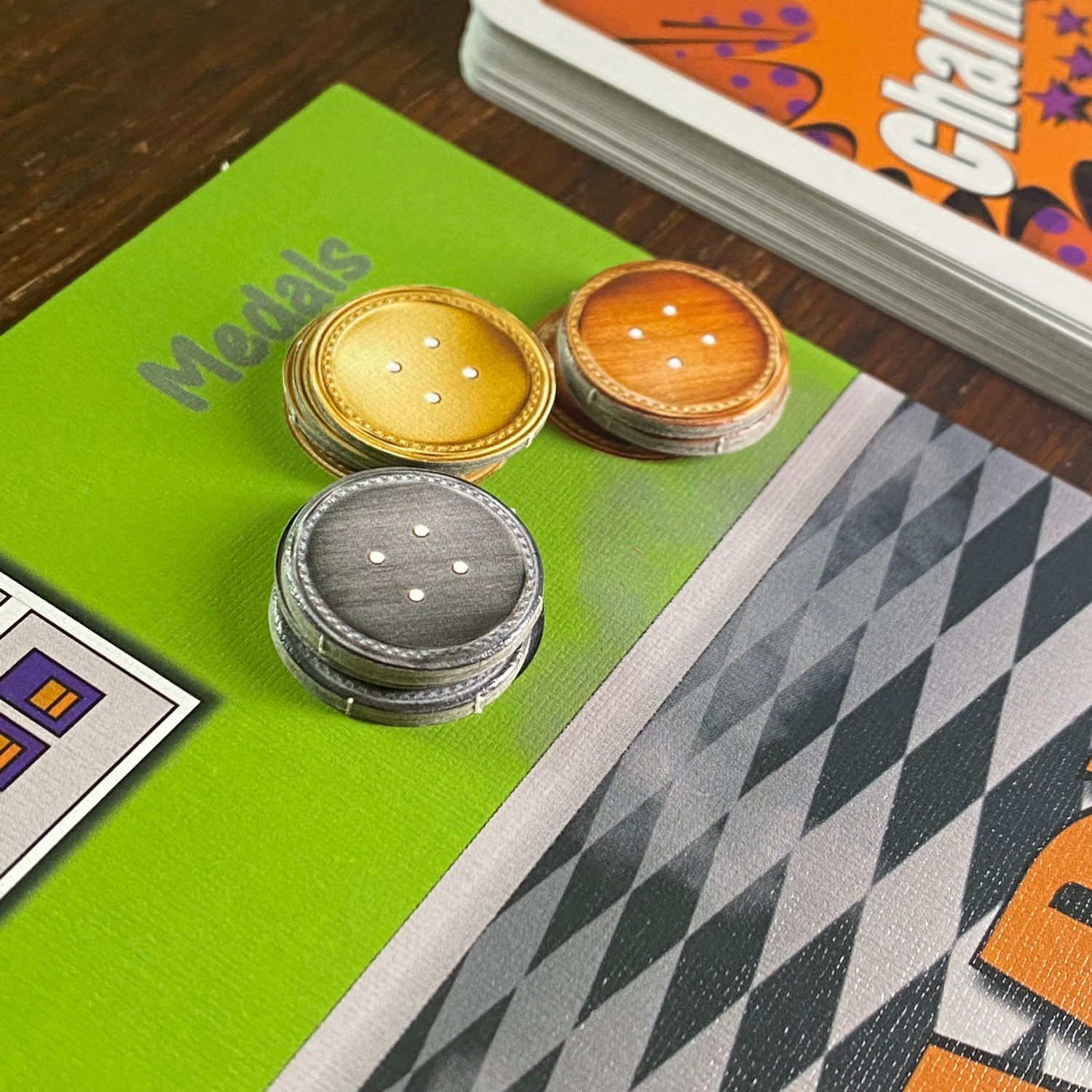 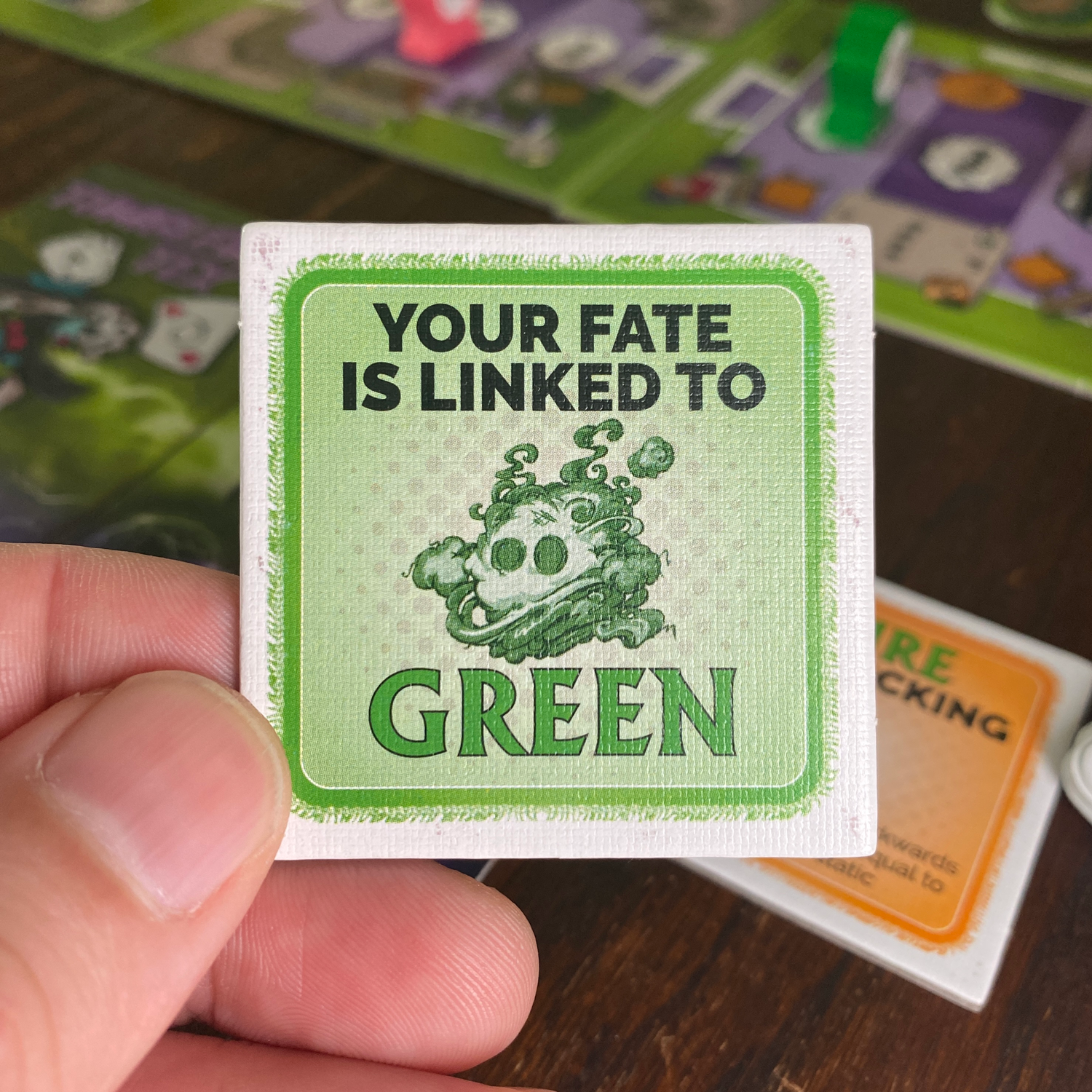 This is a lighter family game and you are a little dependant on the luck of the cards. However, with special powers, strategic play and hidden roles there is more to this game than meets the eye. With more players, it can swing back and forth, and also end more abruptly than you might like. At higher player counts you do lose a bit of control, but for me this smattering of chaotic luck actually creates some pretty tense and amusing rounds. That won’t be for everyone, but at two or three players you gain more influence over the game.

There is a difficult balancing act to consider when playing this board game. You will be wanting your own ball of fluff to move forward, but not at a rate that will see it sucked into the vacuum, but also not too slowly that it is left too far behind the pack. The equilibrium is further complicated by not always having the cards you want for things to play out how you hoped. Utilising the cascading actions on a turn is where the strategy comes into Daring Dustbunnies. Cycling through your four cards quickly and efficiently is the key to finding the cards you want and gathering useful Charms. These advantages can be the difference between victory and a trip to the Bag of Beyond.

A little take-that is also present but not enough to cause a player to run from the table crying! There isn’t that much and only becomes present if a player has to reveal their fate, or carries out actions that suggest the colour of their fate.

In terms of replayability, its lightweight appeal and ability to play up to five players will keep this game coming back to the table. With fewer players there is less unpredictability which makes it a slightly different game, all player counts have been fun despite the different strategies. The different rooms and player powers adds further variables, and with it more variety for longevity.

The instructions are clear and concise. As a result, Daring Dustbunnies is a delight to teach as you can pretty much learn as you play after a short introduction and explanation.

Those that follow me on Instagram or read my review of Splash Party, will know applying stickers on game components is among my least favourite things to do. However, even I could cope with the circular stickers that come with this game. I liked how there were a few different expressions to choose from too.

The whole board game has a bright and enticing look to it. I like the cartoon feel and the touches of humour scattered throughout. There is a bit of air in the box, but as an independently published game I can forgive this a little more as I understand standard box sizes are a cheaper option for the smaller publisher.

A few components such as the medals and cat and dog tokens could’ve been improved. Again, I appreciate this is a trade off when working to the budget of an ideal MSRP. It isn’t that they are bad, just could’ve been better.

The look and theme does make it feel like it could be for a younger audience than the ten plus age rating on the box suggest. While younger players can grasp what they have to do, the subtle tactics are probably not going to come to the fore for anyone under eight or nine.

Overall, Daring Dustbunnies looks very good on the table and the unique theme does not feel pasted on, in fact, it works really well. 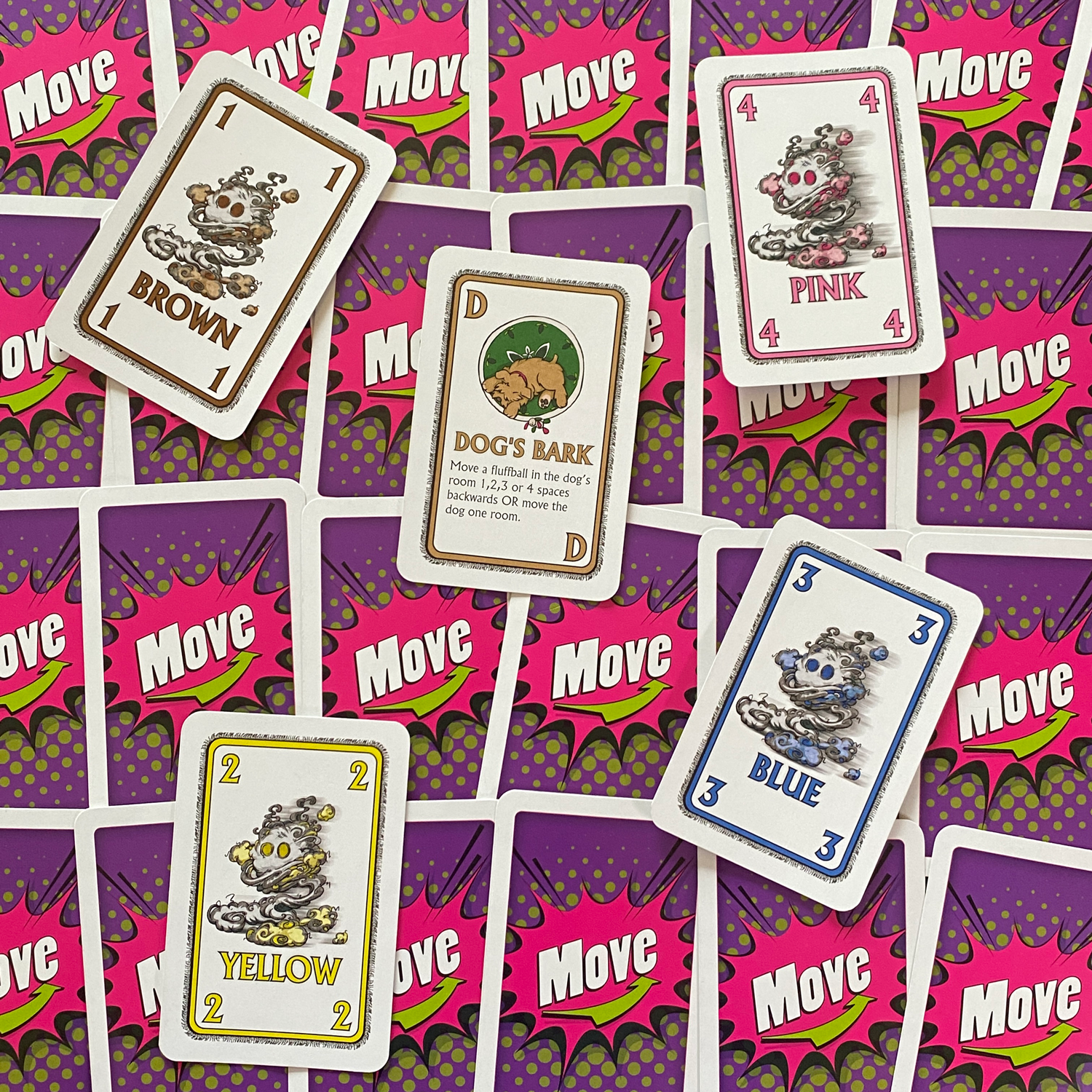 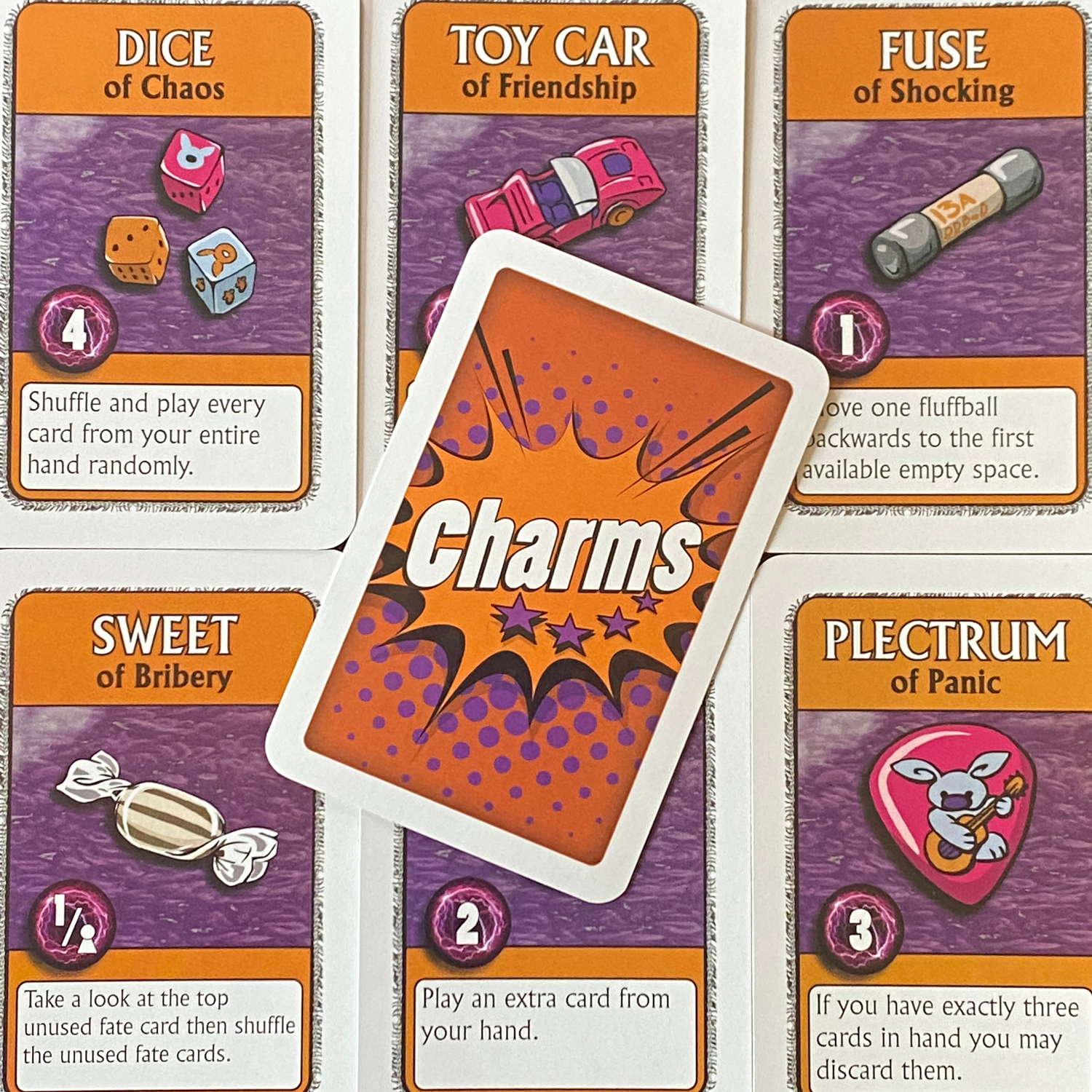 Harrison (13): I think it is a very fun game. I love the theme. I really enjoy that you need to get really close to the edge but not fall in as it makes it tense, especially when your fate is in other people’s hands.

George (10): I think its a great game. I love how you have to risk it! It really makes me think of dustbunnies jumping around trying to get sucked into the Bag of Beyond. 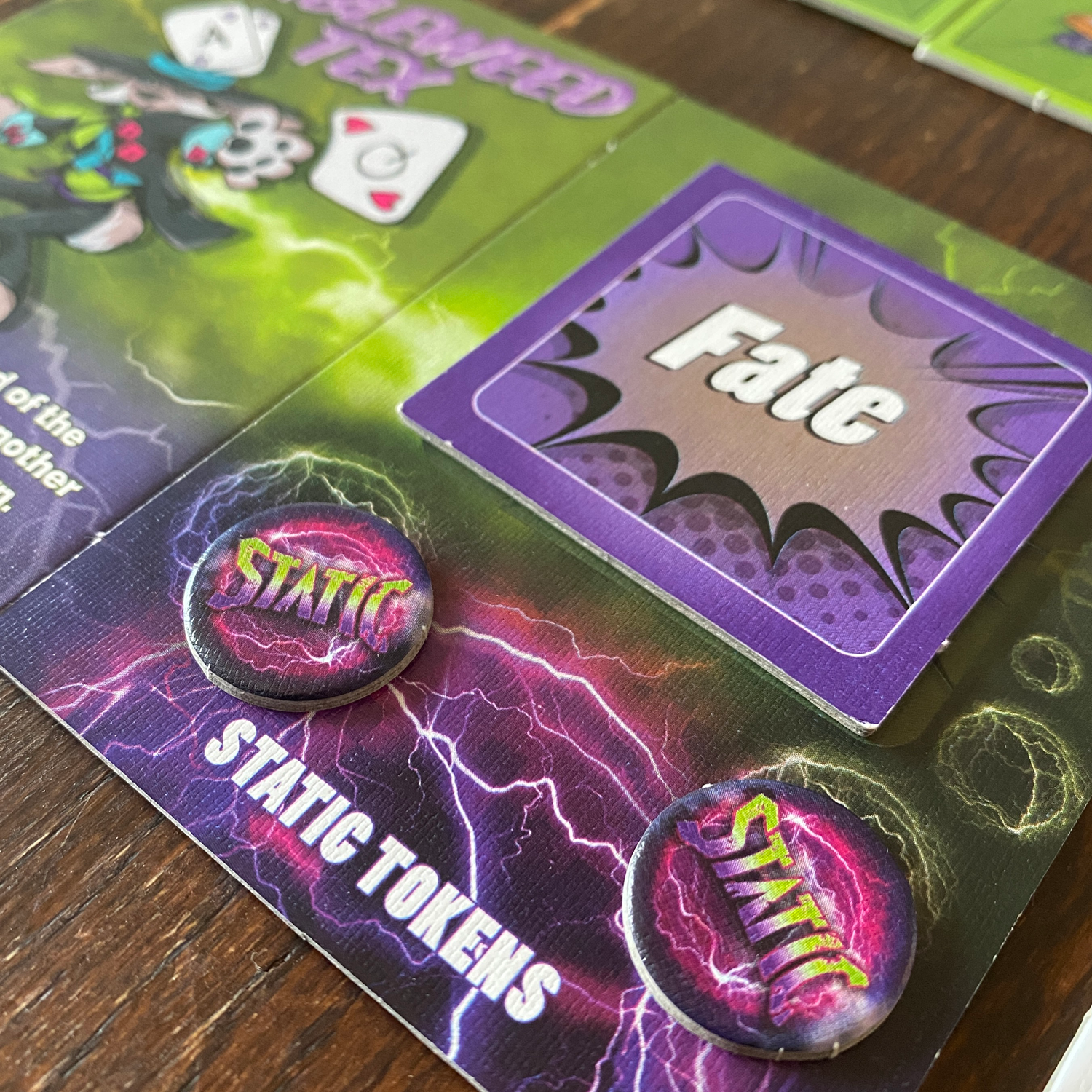 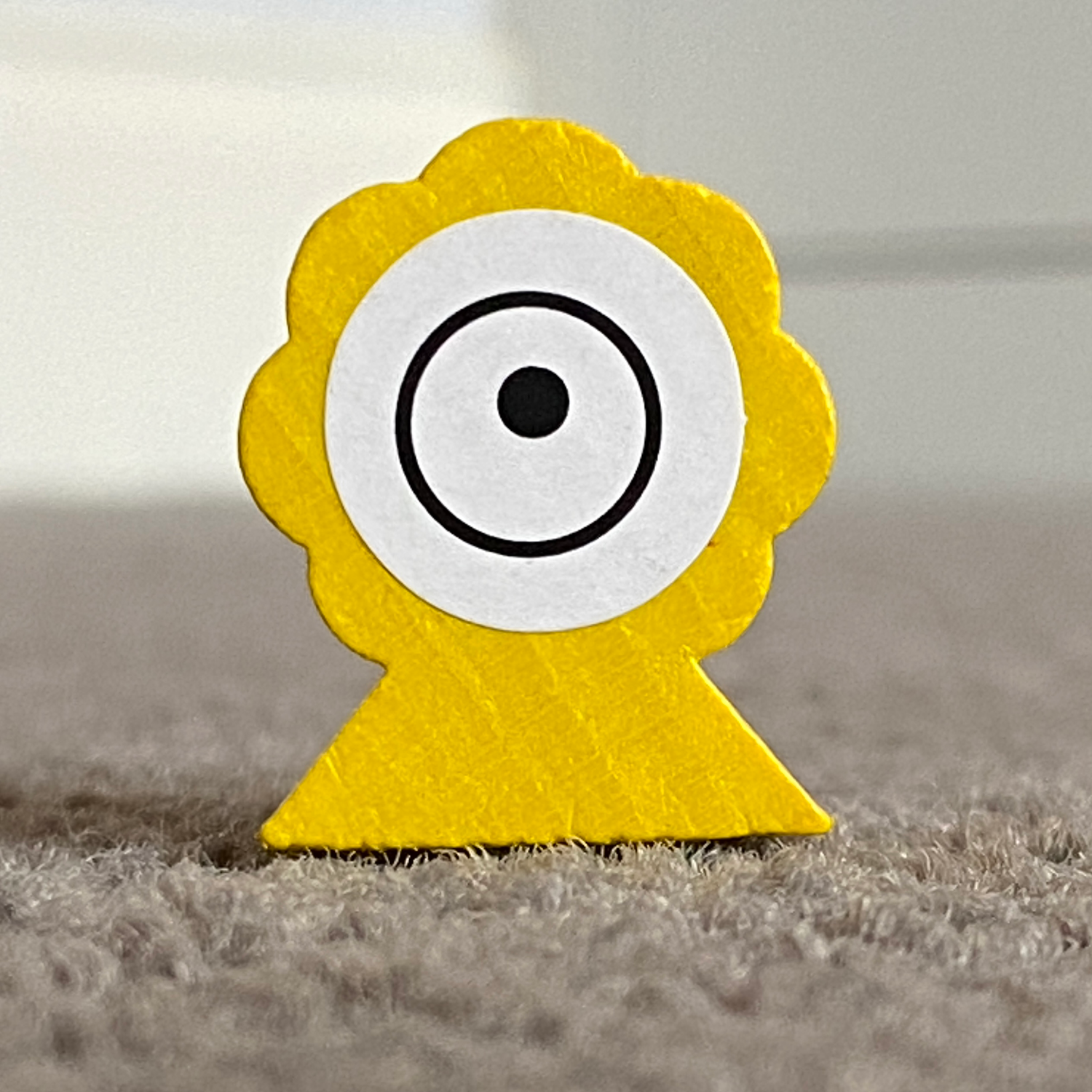 The unique theme intrigued me and now I have played it, I am delighted by its refreshing kookiness. I like all themes in board games, but it is nice to play a game with a theme that hasn’t been done before, that in itself is an unexpectedly rare treat.

Rounds of Daring Dustbunnies are full of mischief and mirth. I like the twists and turns that Talismans of Truth, Charms and unique abilities add to the overall light strategy. While rounds swing back and forth and your colour can teeter on the edge of disaster or be left languishing near the start you will still be having fun planning and playing out your turn with the cascading actions at the palm of your hand.

The first people I introduced this game to, said that it was, and I quote, ‘a winner’ and subsequent plays with other people have reinforced this with a similar feeling of enjoyment. The quicker playtime helps mitigate the swingy nature of rounds. In turn, this allows for an entertaining little game that is very worthy of the Board Game Review Hall of Fame.

This is a surprisingly fun board game that doesn’t take too long. Yet Daring Dustbunnies still delivers fun and merriment in bundles. I can see it regularly getting to the table with gamers and non-gamers alike and so have no hesitation in suggesting you try it out if you get the chance!

If you already own Daring Dustbunnies and enjoy it, or are looking for other inspiration, you might also like these similar games:

Buy Daring Dustbunnies
from Out of Town Games 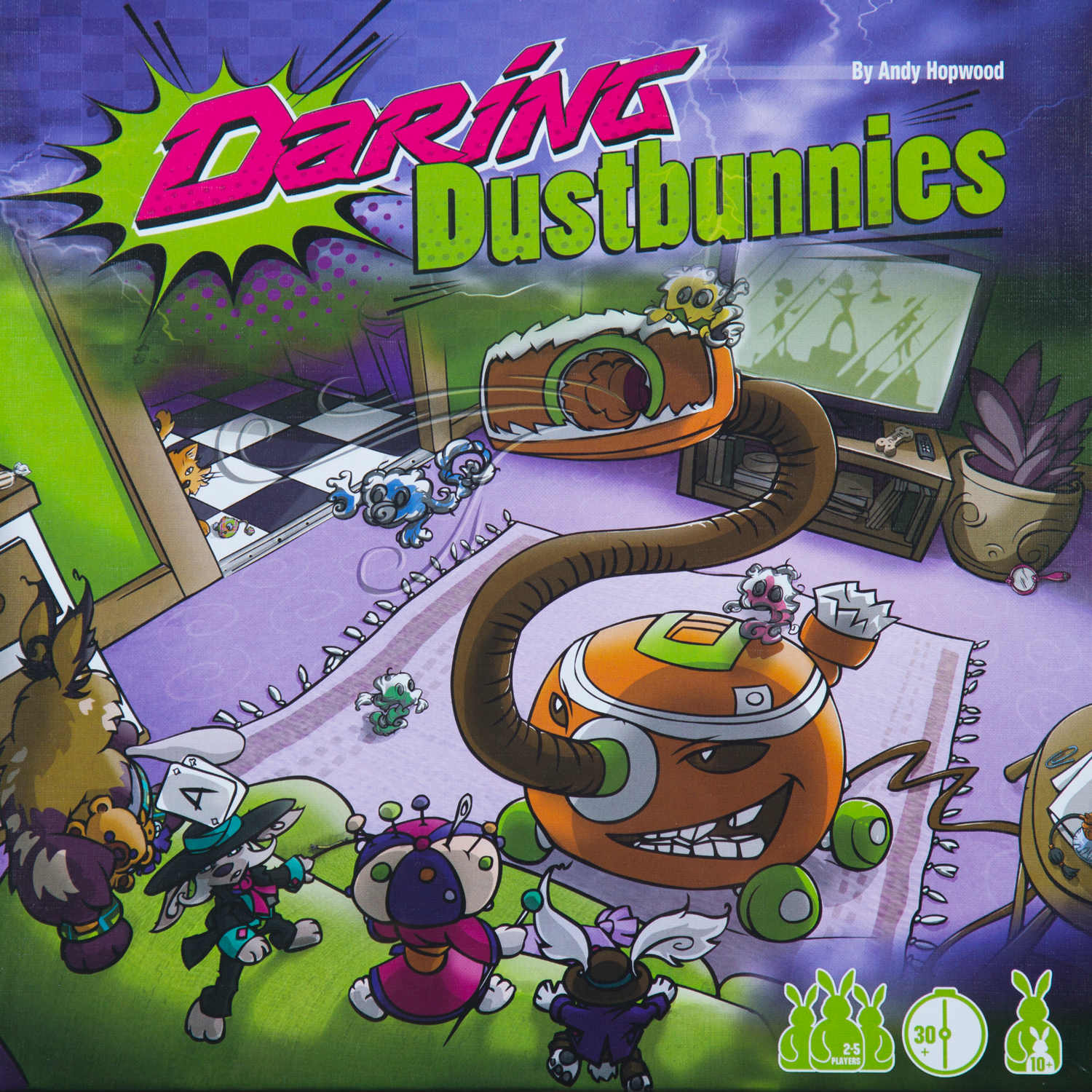 For clarity. We don’t get paid for our reviews. This game was purchased with my dwindling life savings, this has not affected our review in any way.

Tiles of the Arabian Nights Preview Meeple Circus, Game of the Month – September 2021