Anna in Disney’s Frozen sings to her sister Elsa, “Do you wanna build a snowman?” To exactly the same tune I sing to you “Do you wanna build a Wonder? C’mon let’s go and play”. That’s where the comparison between film and game ends, I’m not sure it should’ve ever begun there in truth, but here we are, I’ve written it and you’ve read it. Awkward. Let’s move swiftly on to a review of 7 Wonders Architects.

The 7 Wonders family needs no introduction. Grand pappy 7 Wonders has been a go to game for larger player counts since 2010 and a popular choice for many. It’s a great game and expansions and even a new edition have followed. I was a bit late to the party and have never purchased it. Then in 2015 7 Wonders Duel hit the shelves, boasting a two player only game. It was equally great and I still enjoy playing it, although my wife needs me to remind her how to play every game.

So when a family weight version of the classic was announced I was excited and nervous in equal measure. There was a lot to live up to, but if this would be a seven player game I can include my family playing, this could be mega! So, I bought it for George’s birthday. Read on to find out our thoughts… 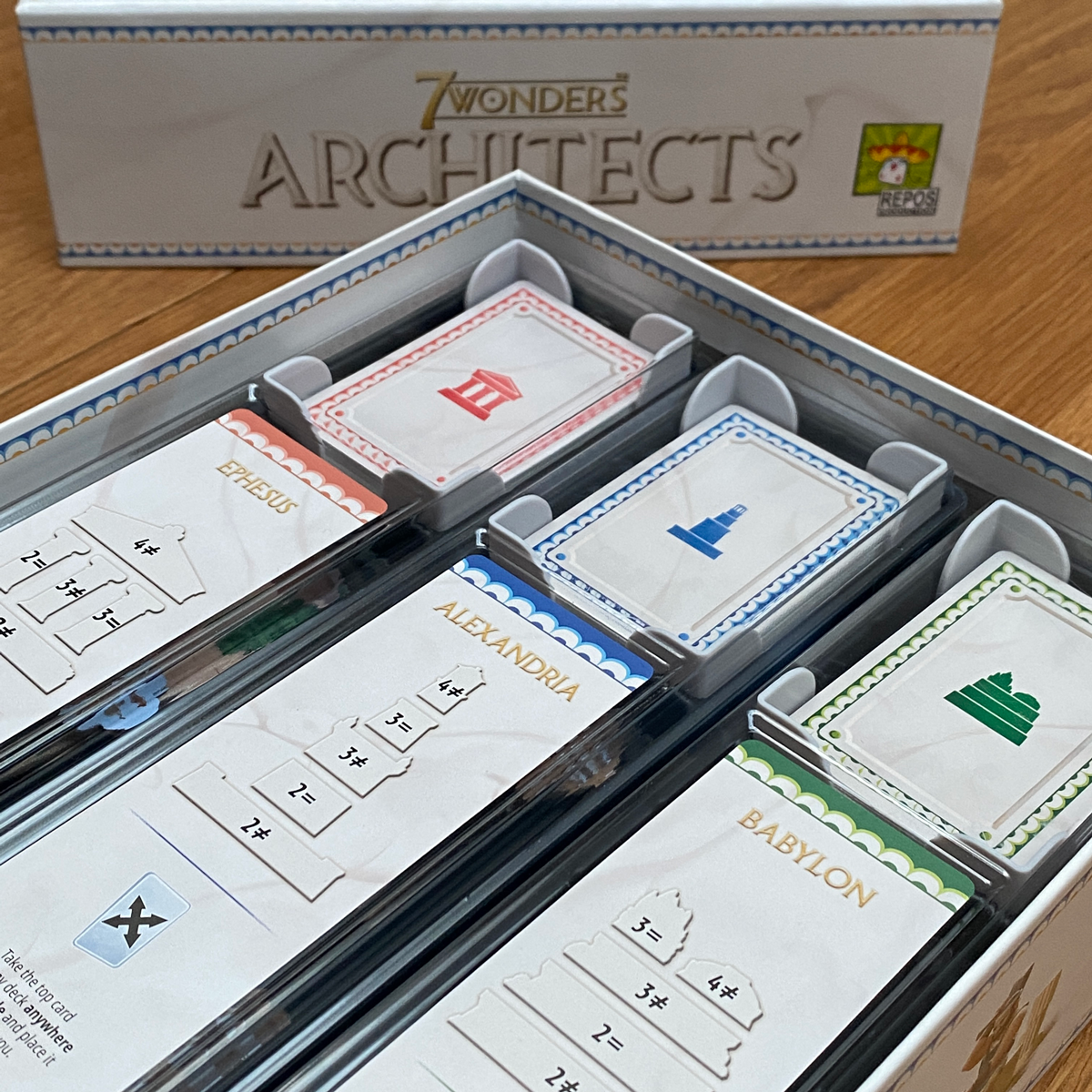 Before the first game, you have to put some stickers on component boxes, this one off event means that future set up is an absolute delight! These component boxes are GameTrayz. If you’re not familiar with these board game storage works of art, you are in for a treat!

The GameTrayz make set up a delight! Randomly pass one box to each player. They take the lid off, place the wonder (unbuilt side up) in front of them and shuffle the deck of cards. These cards, in their included holder gets placed in front of each player.

In the middle of the table you place an additional deck of cards. Military tokens are laid out, peace side up, the number differs depending on player count. Progress tokens are shuffled and three placed face up with the remainder face down beside. Place the cat standee nearby too.

In just a few minutes you will be all set up and ready to play 7 Wonders Architects! 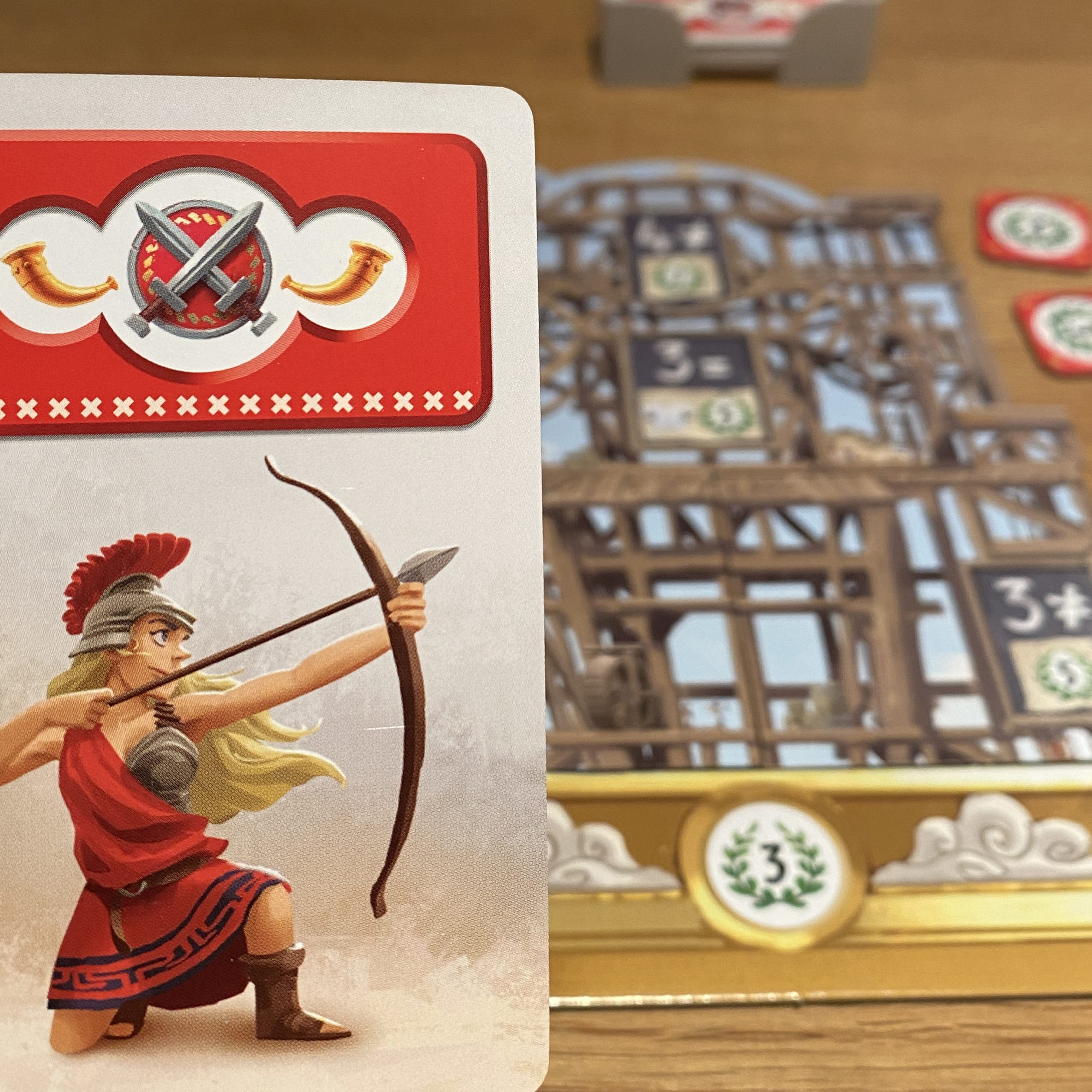 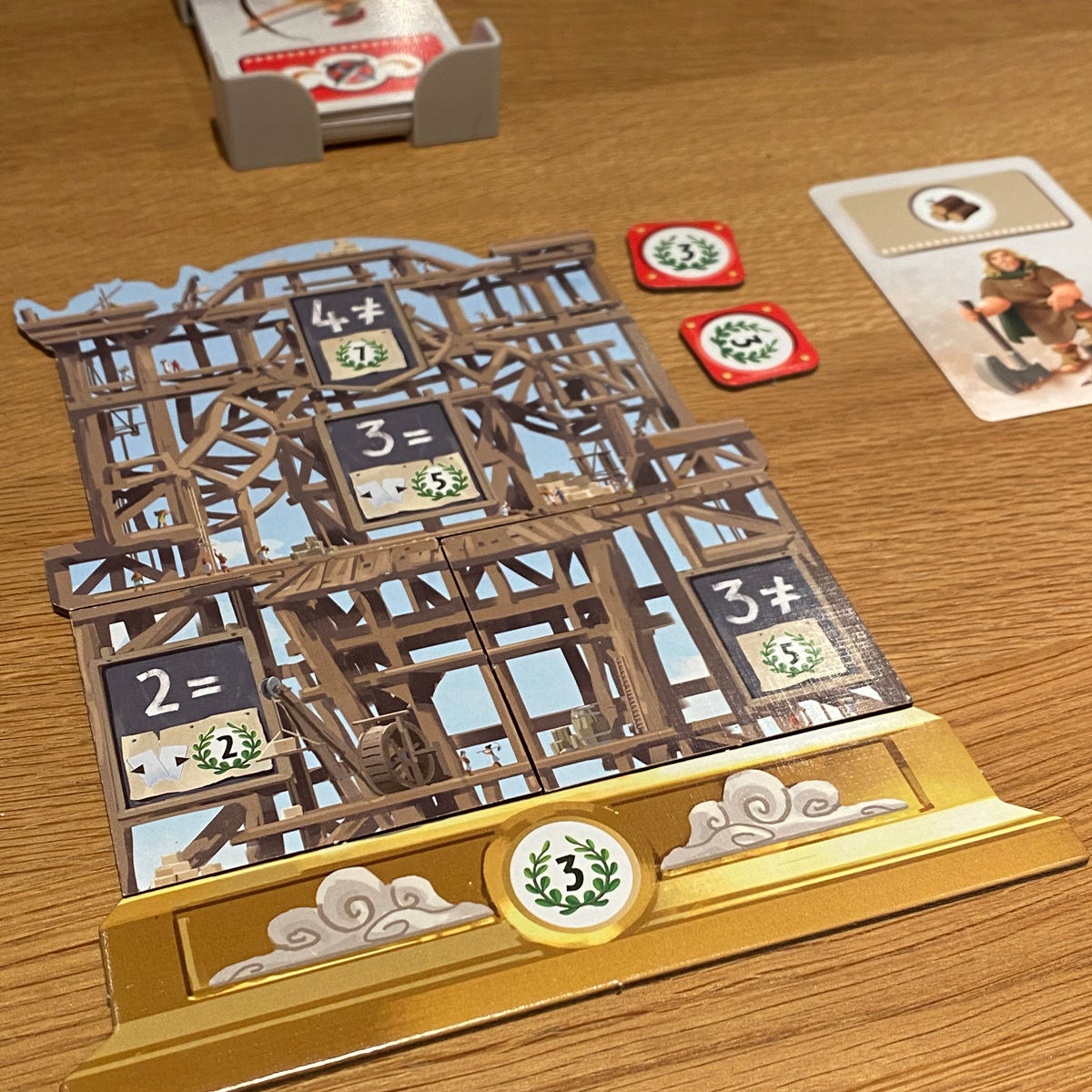 The aim of the game is to get the most victory points. These are gained from constructing sections of your wonder, acquiring blue philosophy cards, military victories and certain progress tokens. The cat will also be worth two points to its owner at the end of the game.

On a player’s turn they have the option to take a card from one of their neighbour’s face up draw piles or draw blind from a central deck. The owner of the cat which is obtained from blue cards can secretly see the top card of the deck before making their decision.

To build a wonder, players need to accumulate cards of either the same or different resources depending on the symbol on the section they are building. This can activate asymmetric player powers too. It is worth noting that if a player has the cards to build a section, they have to, this thwarts people saving up cards for future builds.

Progress tokens are valuable and often grant ongoing bonuses. These are obtained by either getting two matching symbols on green cards or three different symbols.

Military power is different to other iterations of the game. You still collect the familiar shield icons, but some have trumpets on. These flip the peace tokens to their battle side. When the last peace symbol is flipped war breaks out. You compare military prowess with your neighbours and if you have more shields than the player you are sitting next to you gain a victory point token, beat both neighbours and you get two. Red cards with trumpets get discarded, and the tokens are flipped back to their peaceful side.

Play continues until any player has finished building their wonder. The game finishes abruptly when the first player builds their wonder. Scores are then tallied and the winning wonder builder is announced.

Two player games are different, but only slightly. One noticeable difference is that you can draw from your own pile of cards so you still have three draw piles. 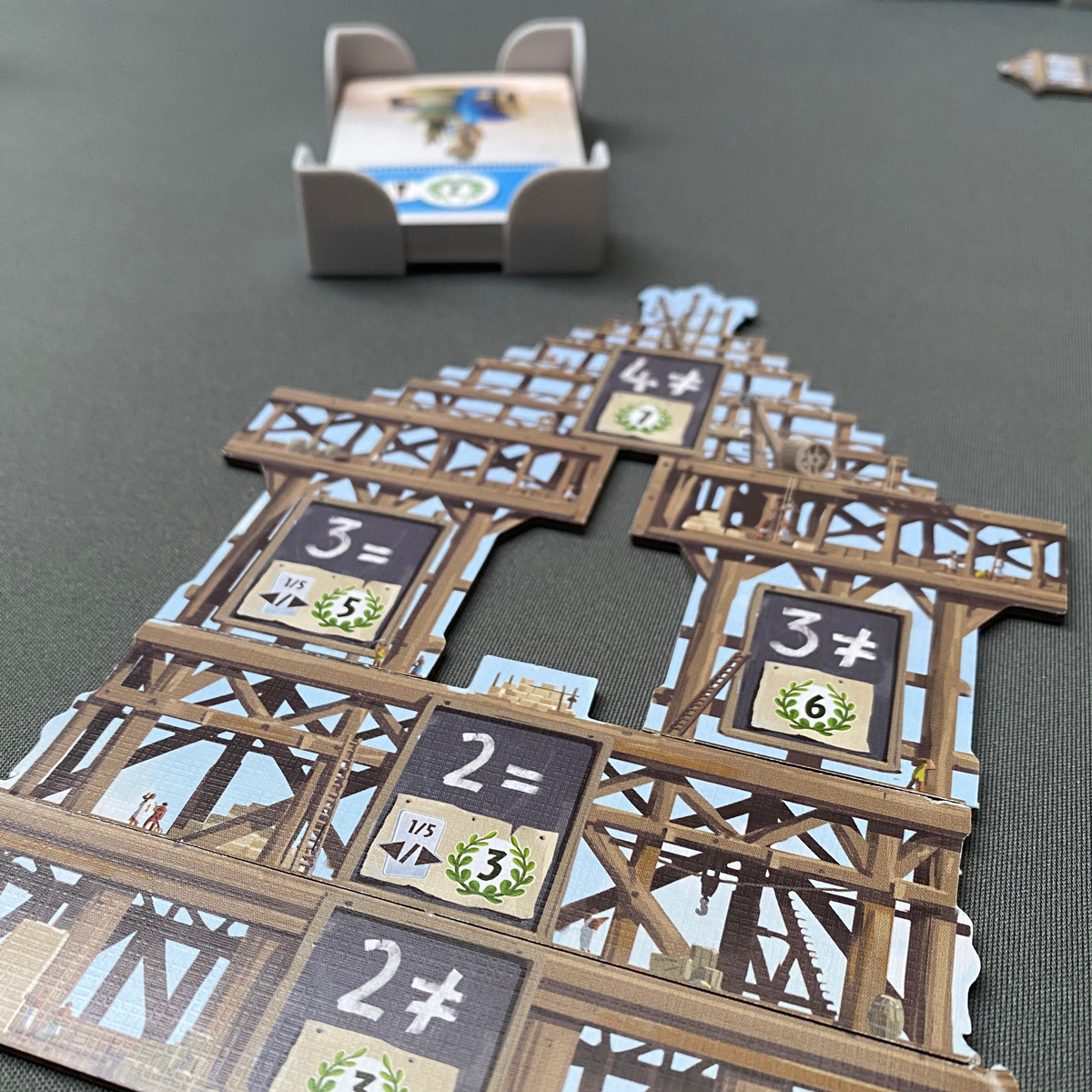 This is a family version of the classic. Your choices are limited, just one of three cards to pick. Yet, you feel like you are making a semi-meaningful decisions. There is a bit of luck on the turn of a card, but this can be mitigated a little with the choice of three cards.

The cat’s ability is powerful and knowing what is in the middle draw pile is a big bonus, but it rarely stays loyal. The progress tokens are equally as valuable granting some great bonuses. But you may not be collecting these cards as your neighbour might be reinforcing their army and you will want to keep competitive in battle. Equally you can’t neglect the resources to build your wonder either!

Occasionally you have to adapt to the strategy in front of you. If there are no military cards available for example, you have to roll over and have your tummy ticked in battle. Hopefully you will be able to obtain blue, green or resource cards that make up for your unwillingness to fight!

Because you only have three cards to choose from, play moves swiftly around the table. It is much quicker than its siblings because of this limited choice. As a result, 7 Wonders Architects works better at higher player counts than the original. It doesn’t however rival 7 Wonders Duel for two players only, It’s okay at two, but generally it wouldn’t be my go to game if it was only me and one other person.

Tear down does involve sorting all the cards by player colour which is a minor faff.

In short, 7 Wonders Architects is a fantastic production. From the lifting of the lid, the GameTrayz inside are such a welcome addition and makes set-up such a breeze.

The Wonders you build are great. One side has wooden scaffolding and people working and when flipped you get the treat of seeing the wonder progress. The art on the cards is nothing special but what you would expect. I think it is commendable that the cards although coloured also have symbols to help with colour vision deficiency.

The cat standee is good, but do yourself a favour and don’t look for images of the cat promo that was issued with early copies of the game. That was far superior and now I want that instead! The rulebook was clear and concise.

The Wonders seem balanced with their rewards. However, as there is asymmetric powers I think it is better to pick randomly. Those with a preference for a certain player colour may be disappointed! 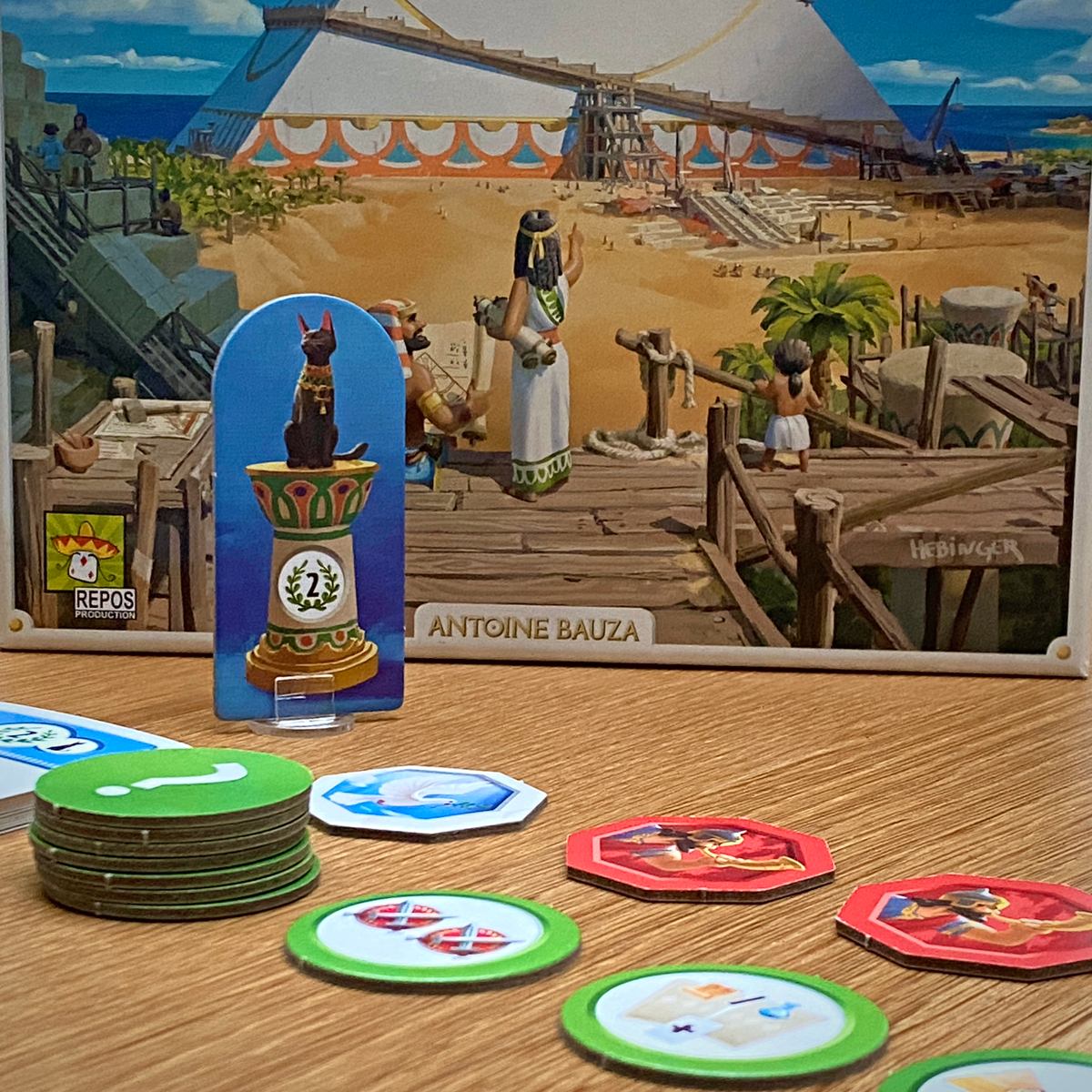 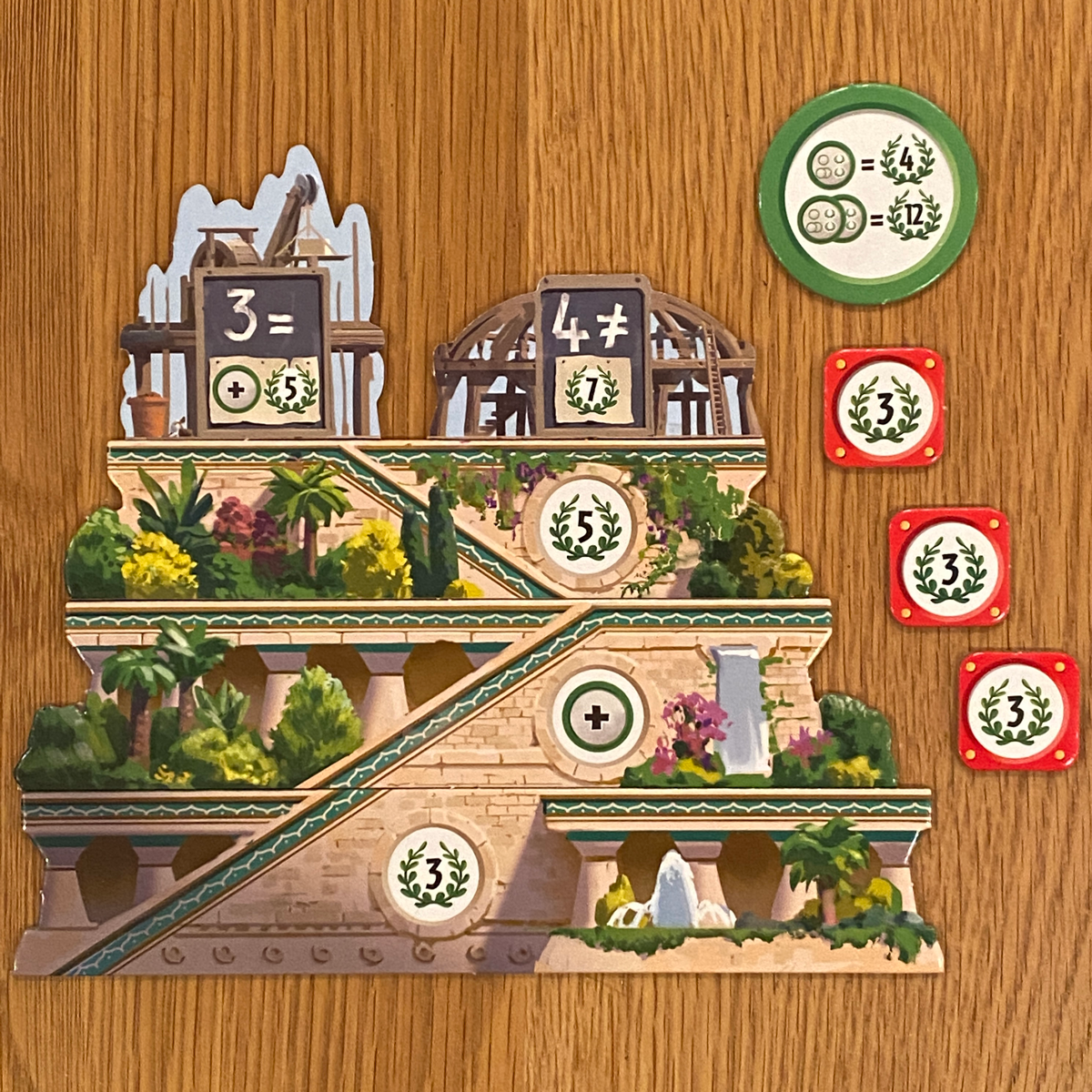 Max (7): I give it a thumb’s up! I really like the entire game. The cards, buildings and EVERYTHING!

George (11): The artwork is amazing. I really like the game and think it’s cool that you have your own different abilities as all the buildings are different. My favourite thing to do is get the cat and collect the green tokens. I thought it was a great birthday present!

Harrison (14): I’ve played all three Seven Wonders games and I think this is actually my favourite and the best. I really like the cat. I always try and get the cat.

I’m so pleased I purchased 7 Wonders Architects for George. Although lighter, it feels more streamlined than the original when playing with more players. Its ability to appeal to gamers and children is simply fantastic and I can’t see me ever getting rid of this one, not that it’s mine to get rid of! Although, George may not be allowed to take it with him when he moves out!

I liked the original when I have played it, but there is always a lot to digest, which leads to down time. Being simpler, 7 Wonders Architects works better in those situations. It also works brilliantly at lower player counts, four and five is particularly brilliant. It’s perfectly playable at two, especially in the family environment, but it wouldn’t be my go to game generally for that situation.

It is a little pricey, but what you get in the box does feel like it still offers okay value for money. The components are ace and the gameplay is streamlined. It is an exceptional family game and I really do recommend it.

7 Wonders Architects is my new favourite gateway game to recommend or play with people. It’s streamlined simplicity and beautiful components make this a fantastic production. Its ability to scale up to seven players when needed is great. Although relatively expensive, I am so pleased I purchased this game as it has already had plenty of plays and I know there are more to come!

If you already own 7 Wonders Architects and enjoy it, or are looking for other inspiration, you might also like these similar games:

Buy 7 Wonders Architects
from Out of Town Games

For clarity: we don’t get paid for our reviews. This board game was purchased with our own hard-earned cash as a gift to our middle son. We have tried not to let this affect our review in any way.