Clash of the Ardennes Preview

Clash of the Ardennes is a self-described ‘epic battle during the Battle of the Bulge’. Lockdown life has seen me add a few pounds to my usually extraordinary physique. So post lockdown I, like many others, will be having my own battle of the bulge. However, this two player game is not about the latest fad diet, this is a tactical skirmish battle set in World War II. 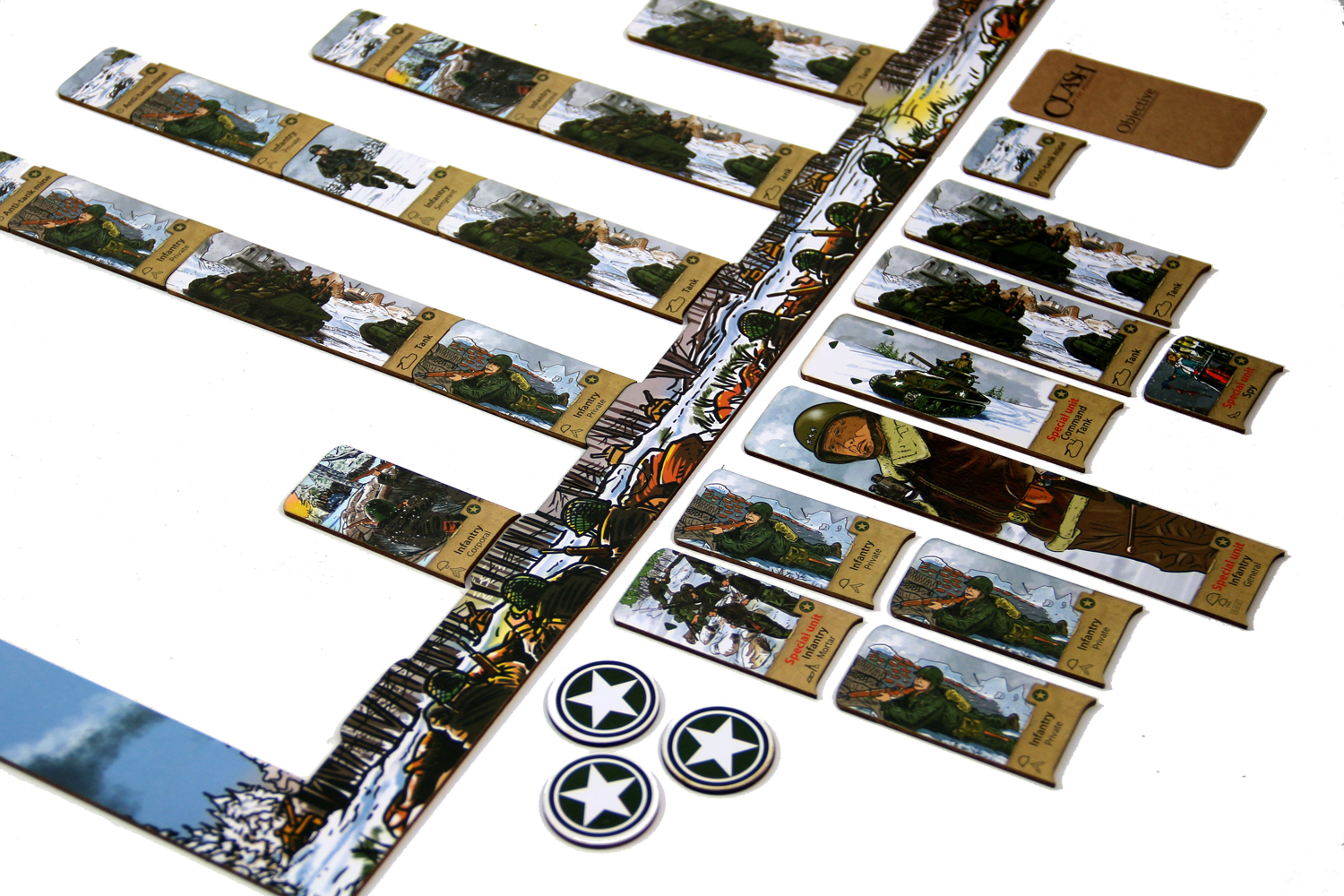 Clash of the Ardennes opposes two players against one another. Each player draws a random hidden objective and victory will be granted to the player who completes it first. To complete this goal players will need to dominate certain streets using the same limited military units as their opponent.

A bit like rock, paper, scissors, every unit has the ability to defeat another type, so an anti-tank mine defeats a tank, a tank defeats infantry and infantry can disable an anti-tank mine. This only happens when they clash and only if a player wants to, alternatively they can just create a blockade. There are placement rules and a couple of different units but in essence that is the simplicity of the play.

In actual gameplay the abstract strategy really comes to the fore. With each street becoming a tug-of-war battle. Tenacity has to be balanced with the limited units to accomplish the mission. 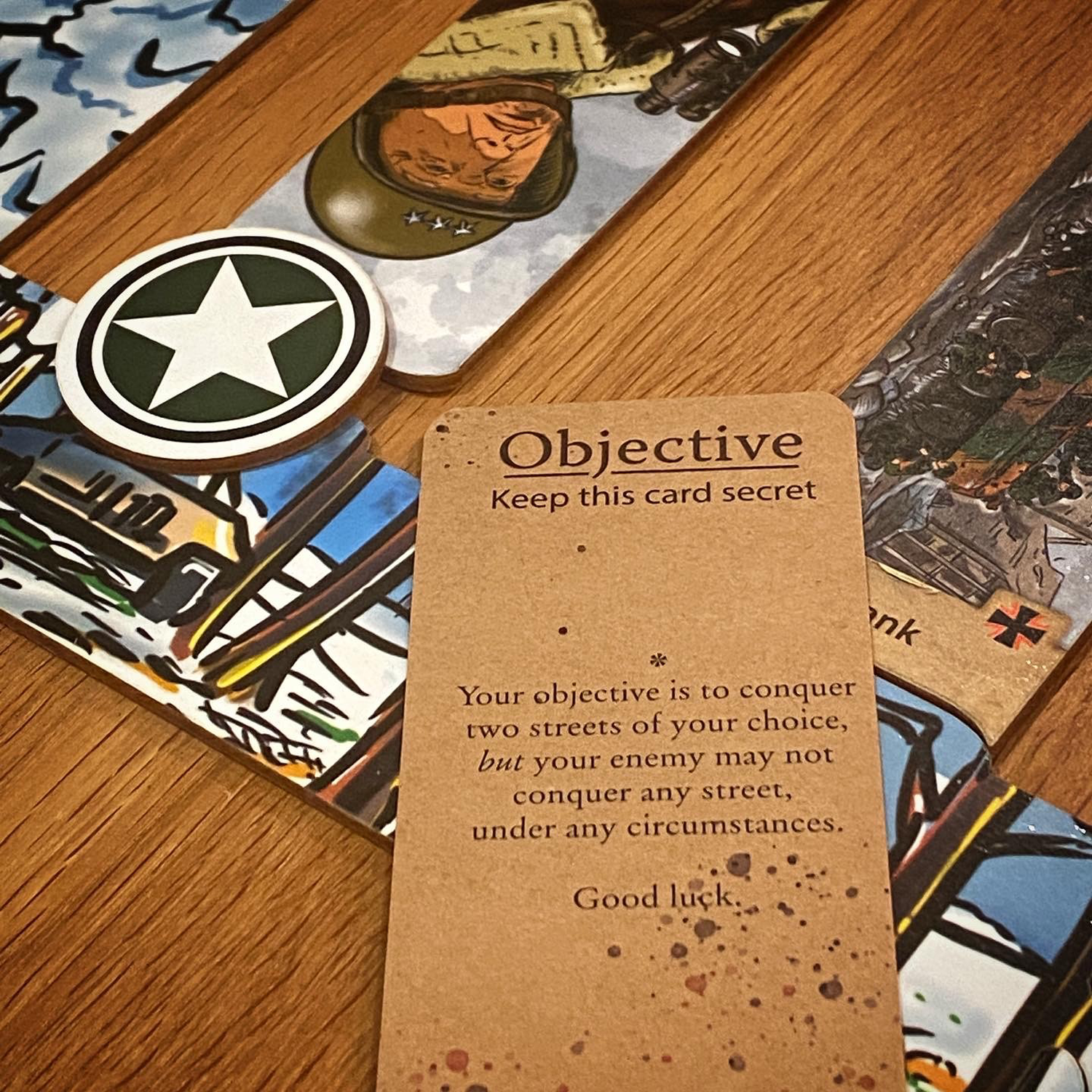 An objective card and defeat. Image © Board Game Review UK 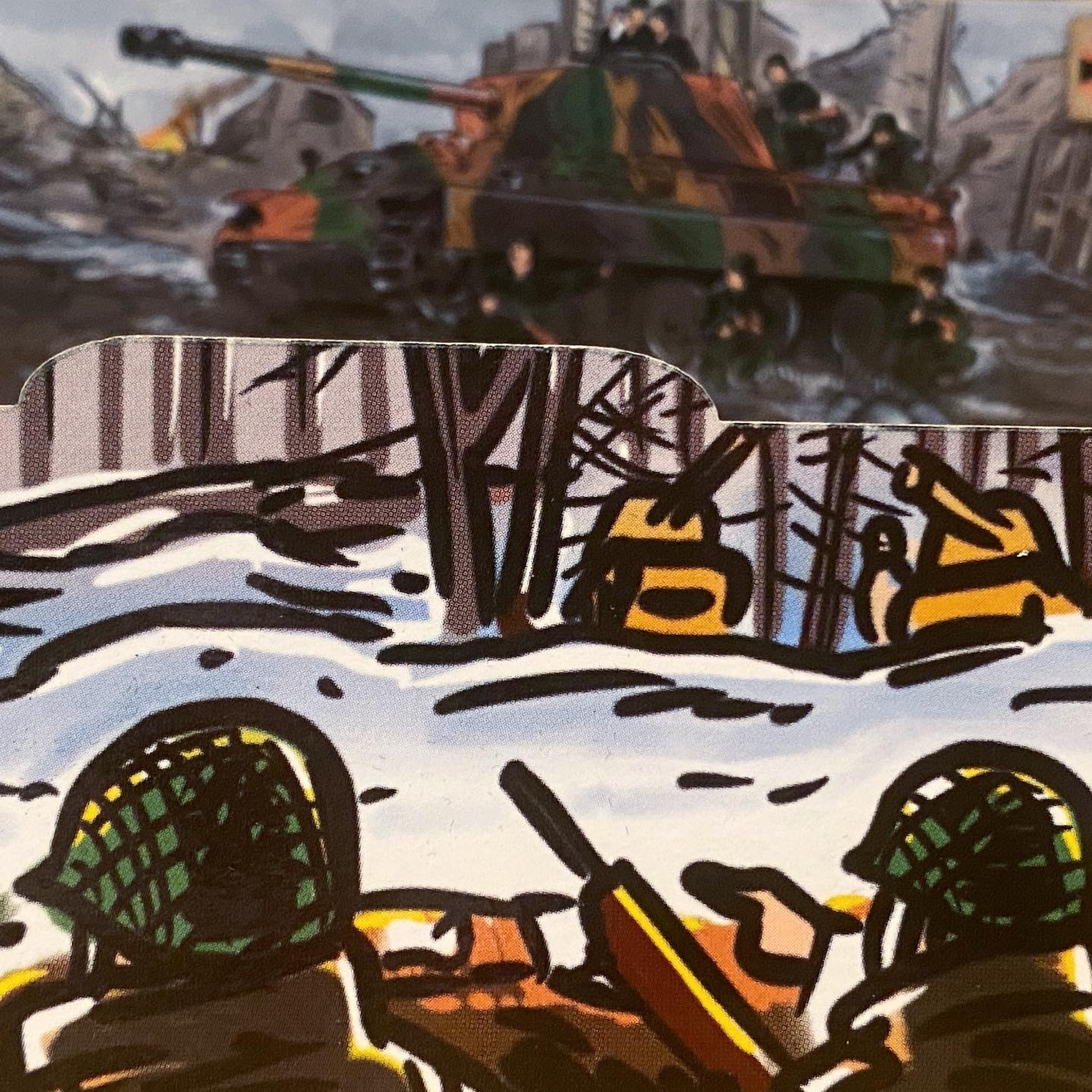 The demo copy I received has a jigsaw-like border which creates the battle field. This is an interesting sojourn away from the typical board. Personally, I would rather have a board with markings on, and this jigsaw border be a Kickstarter add-on or exclusive. I say that because I would welcome the squares on the board to help with unit placement.

Clash of the Ardennes’ artwork is absolutely brilliant and evocative of war. The pieces were also made of wood, which made the components feel luxurious. For a demo copy, it was a polished production which suggests the final product will be too. 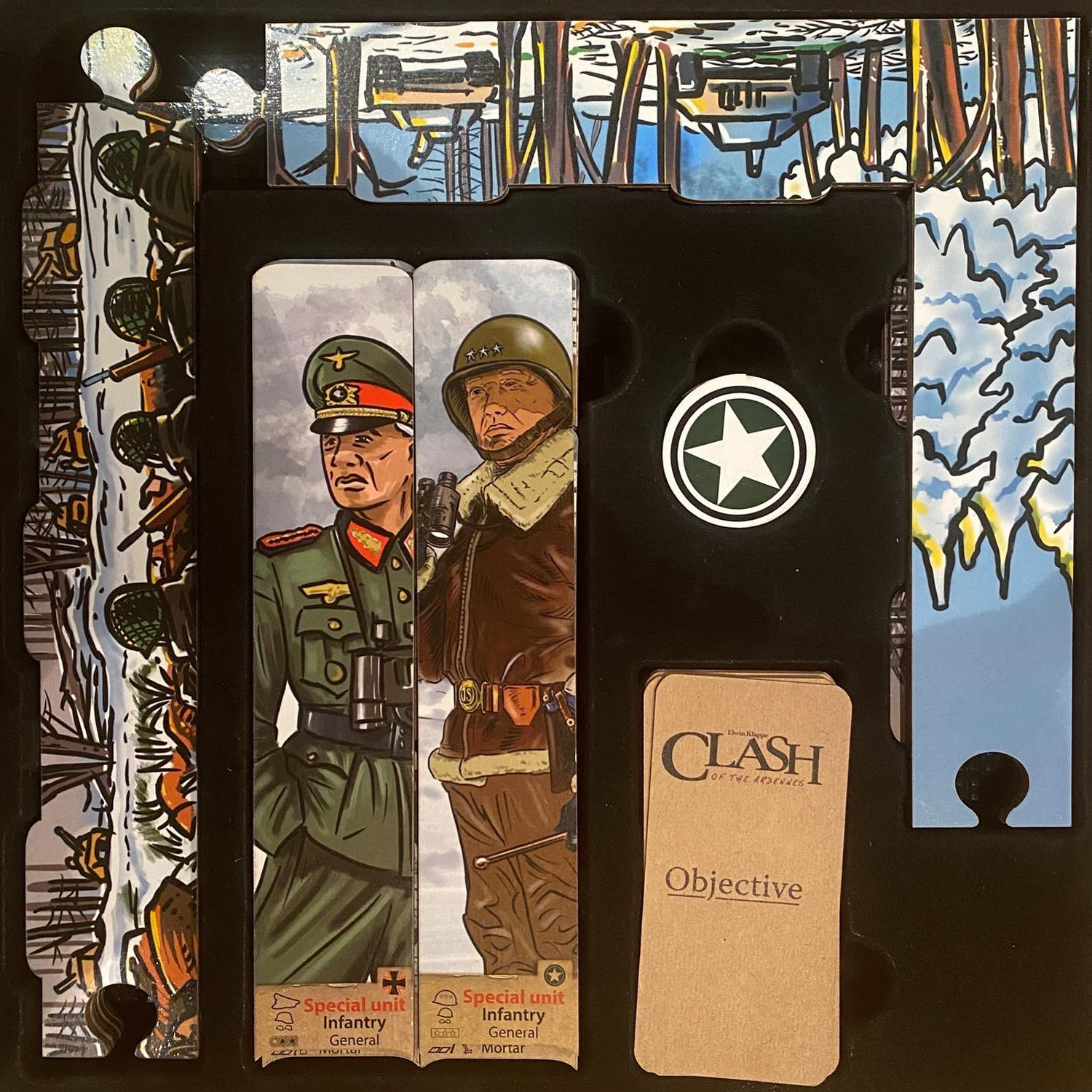 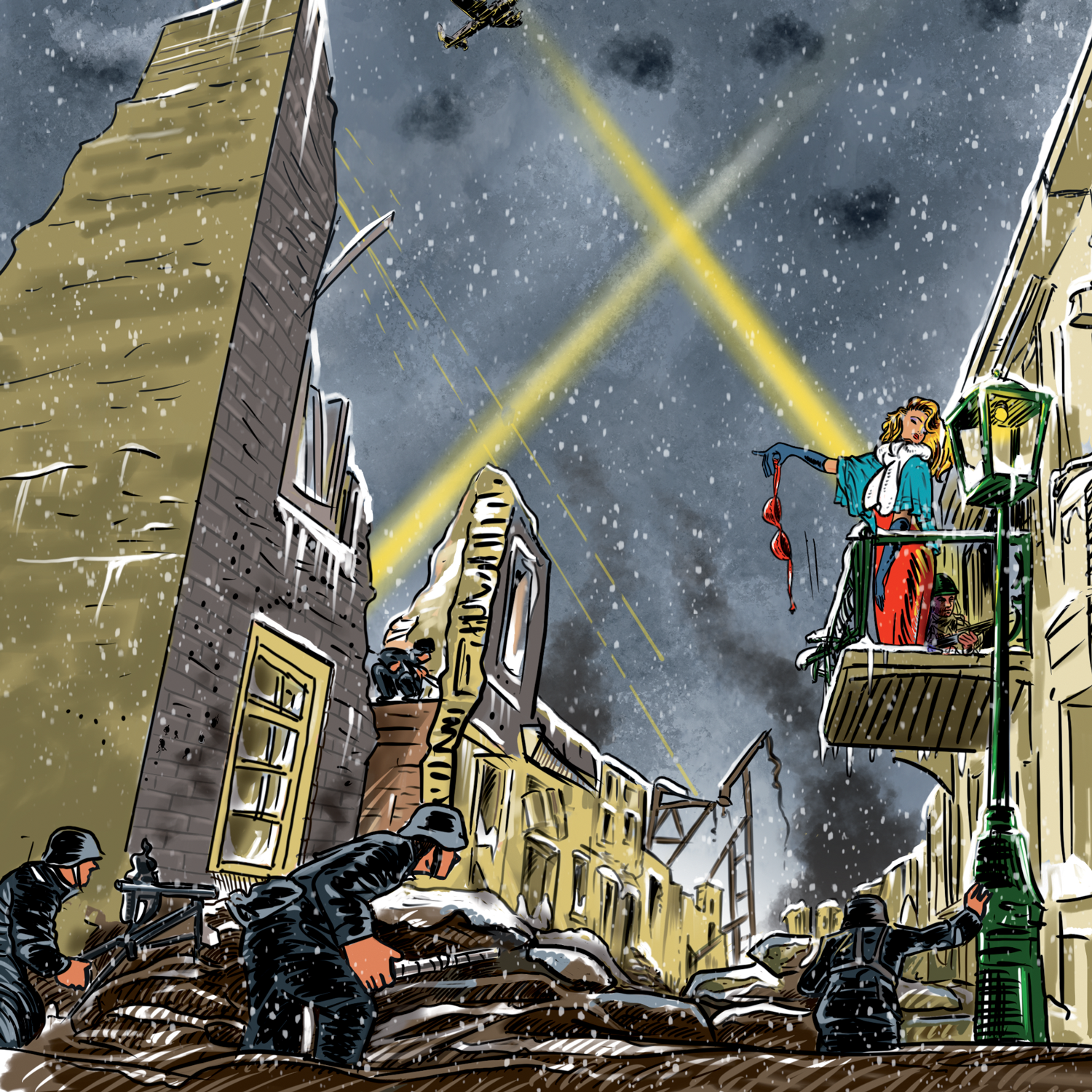 Final thoughts on Clash of the Ardennes

I have looked forward to Clash of the Ardennes since I first set eyes on it on Instagram. I was sold on the illustrations alone and knew nothing of the gameplay. When it arrived, the gameplay surprised me. While it was easy to learn, the game creates some interesting decisions to make. The constant cat and mouse nature of the gameplay reflects the ebb and flow of the changing tides of war. Meanwhile the hidden objectives add variety to each game and further complexity.

If Clash of the Ardennes sounds like it is a game for you, rest assured, there is plenty of dogged, gritty fun to be had. But, only by those that decide to back this game on Kickstarter. Go check out the campaign!

Hit the Silk! Preview Kluster, Game of the Month – February 2021

The Tabletop Find It Book Preview

Tiles of the Arabian Nights Preview