Advert: this game was gifted by the designers, this has not affected our opinion.

It doesn’t matter if you think of the towering giants on the covers of Isaac Asimov science fiction books, Baymax from Big Hero 6 or the companions to many Star Wars characters, Robots are cool. Fact.

I admire people that spend a year creating a robot to send into the Robot Wars arena. They usually watch it malfunction and get well and truly destroyed. The time dedication and lack of knowledge of electronics would thwart me somewhat. Imagine my pleasure though, when a preview copy of Bots Up popped through my letter box.

In this card game, coming to Kickstarter soon, I can build a robot by drawing six cards, with no prior knowledge of robotics and in no time at all. I can then still send my bot into battle and watch it malfunction and get totally destroyed! But maybe, just maybe, it will survive and win! 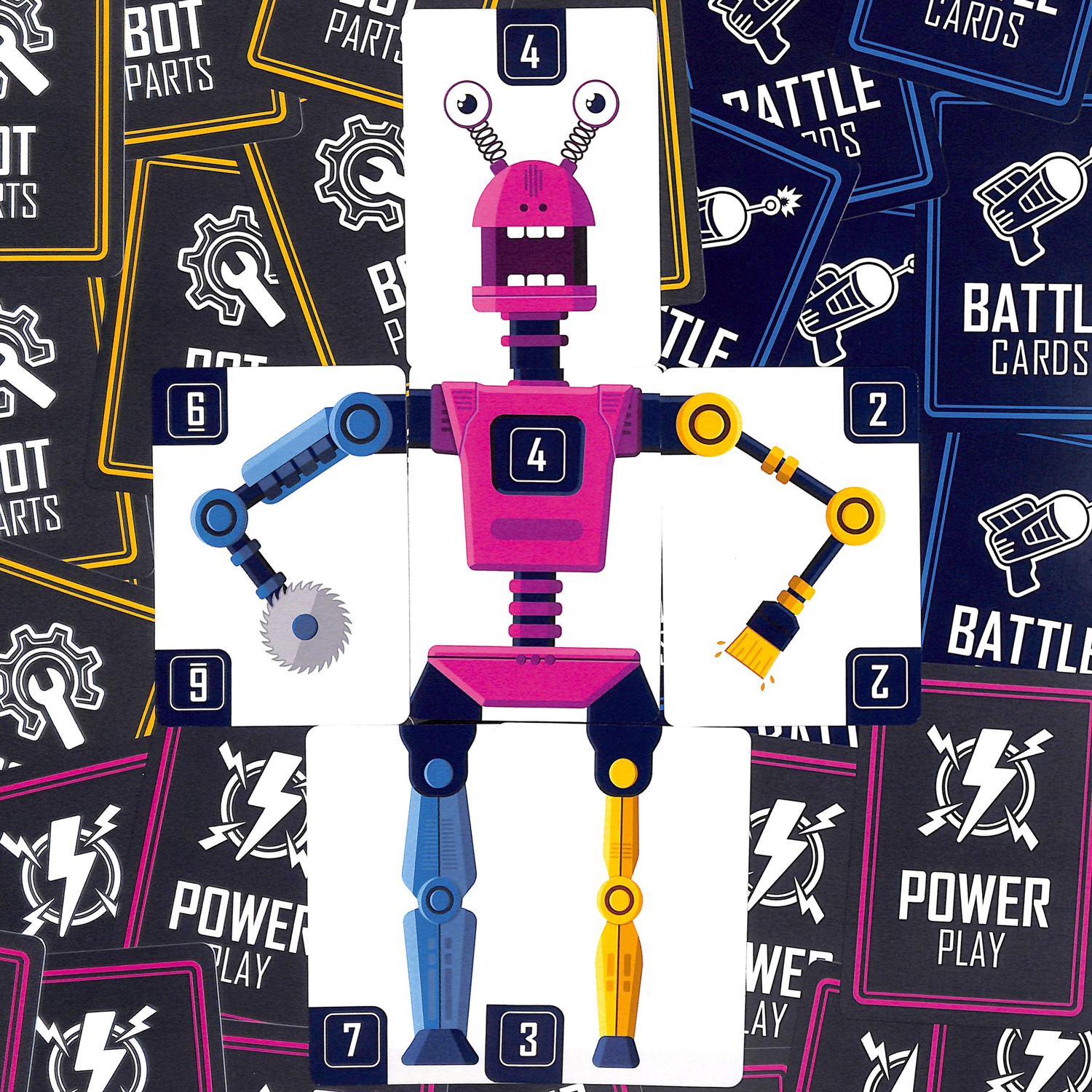 A robot prior to battle in
Bots Up 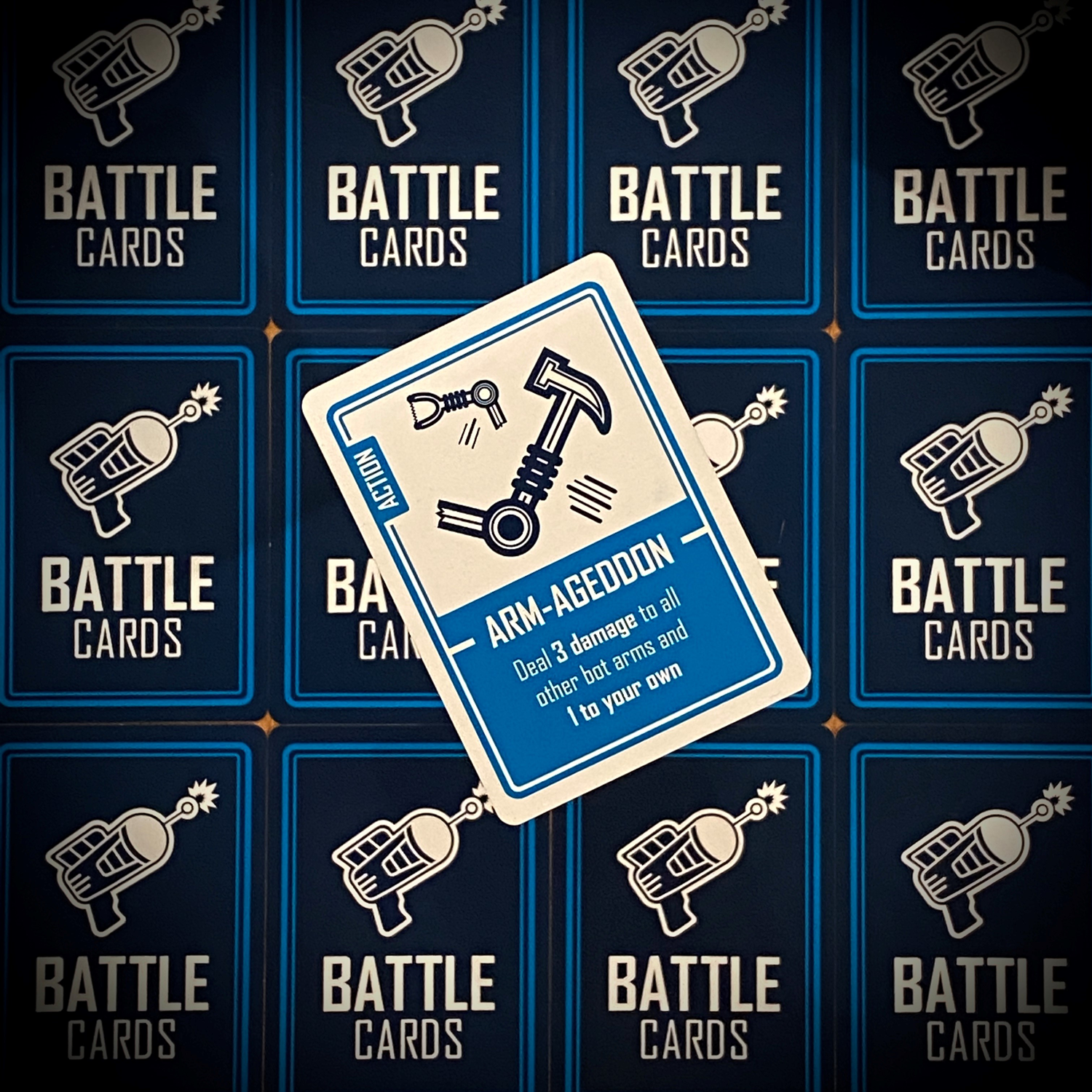 An attack Battle Card
from the game Bots Up

Bots Up is designed by husband and wife duo, Matt and Rosie. They describe the game on the box as ‘a bot-battling card game’. That pretty much sums it up. As I hinted towards above, you build a robot by drawing cards, and then go into the hurly-burly using Battle cards.

The cards are full of mechanical mischief. The Battle Cards either provide protection for your robot, trigger a Power Play, or allow you to attack your opponents. The assaults can cause damage to all players, or can be much more targeted against a specific rival. Power Play cards are a mix of really good and really bad effects that add extra chaos and amusement.

The game is easy to learn and play. Broadly speaking you start with four cards in your hand and every go you will pick up two cards and play two cards. You will then use other cards to increase or decrease attacks as play moves around the table.

Damage is noted with tokens, unless a robot component is destroyed, in which case the corresponding card is flipped over. The last bot standing (or at least with a body part remaining) wins.

I was lucky enough to get a play-test version of the game and I have had a few messages from Matt and Rosie when things have slightly changed. I am pleased to say, their tinkering with the nuts and bolts of the game have changed things in a good way. I think it is to the designer duo’s credit that this game is still being slightly tweaked ahead of its Kickstarter campaign. All the suggestions fed back to me have made sense and improve the game which didn’t need much improving anyway!

See us unbox Bots Up on our IGTV channel by clicking here. 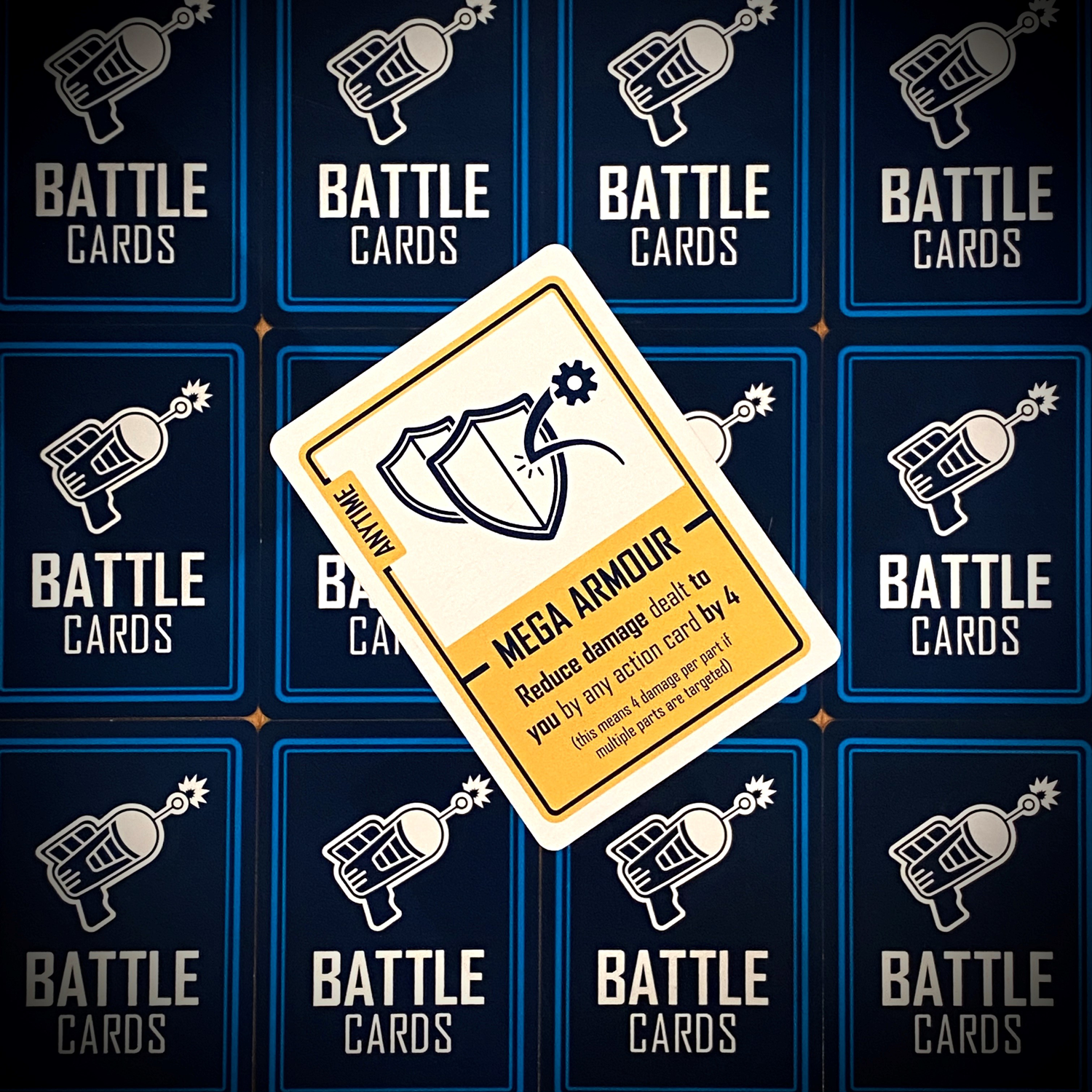 Anytime cards can be played at anytime
in Bots Up, as you might expect! 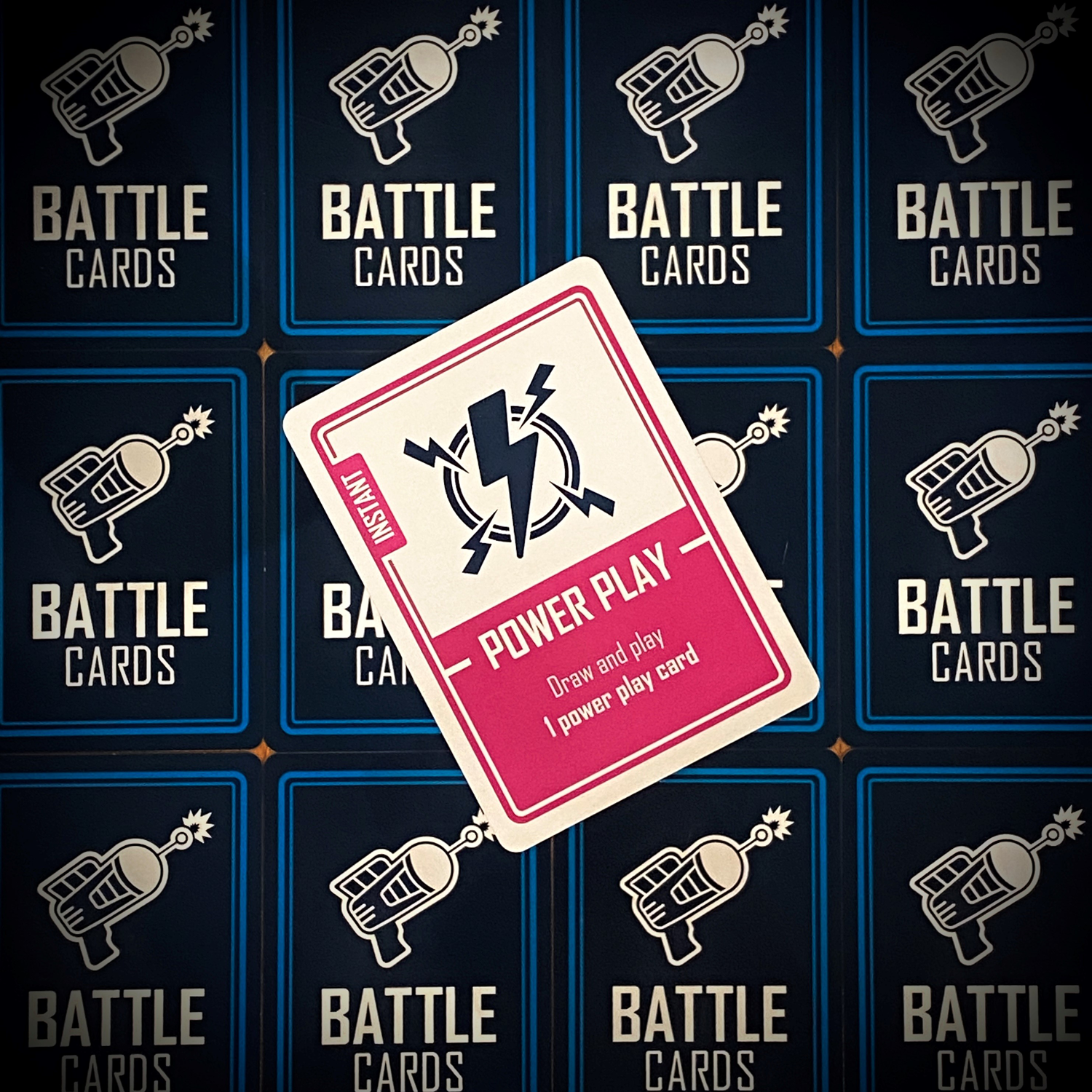 This Battle card triggers a Power Play
will the card be very good or very bad?

Final thoughts on Bots Up

Every robot has its own personality shining through in the artwork of the bot’s heads. This gives your bot real character. The bold but simple colour scheme of dark cyan, magenta and yellow adorning the cards is also a winner.

I have had a number of robotic encounters against my wife. At two players, Bots Up really shines as a metallic duel. It’s the equivalent of a mechanical Ping-Pong match, as you attack, defend and steal from your adversary.

Those that have read my review of King of Tokyo will know I am generally not a fan of elimination games. At three to five players, this game is exactly that. This is a personal preference of mine and I know many people don’t have a problem with it. I will say it is better than many with that mechanic. However, I’ve heard on the grapevine that they are currently playtesting a variant that may address my qualm. We will have to wait and see!

I have no doubt that the finished game will provide laughter, fun and enough strategy to entertain players young and old. It is therefore, in my opinion, well worth backing on Kickstarter.

I am looking forward to seeing the Kickstarted Bots Up land on the doormat. I shall be eagerly awaiting it like K-9 waiting at the door for Dr Who to return! Until then, follow them on Instagram @botsupgame, or sign up for notifications on their Kickstarter campaign here: https://www.kickstarter.com/projects/botsupgame/bots-up

The Quest for El Dorado: Game of the Month July 2020 #022 Santorini Unboxing Video