Advert: we were gifted this game by Gamelyn Games this has not affected our opinion.

Tiny Epic games have been going from strength to strength. Their most recent offering, Tiny Epic Pirates, raised over $1m on Kickstarter to give you a barometer of their success and popularity among tabletop gamers. Up until this year, I hadn’t played any of them. So with Tiny Epic Tactics, I made amends. For the record, I don’t think 2020 will be remembered by me as the year I played my first Tiny Epic game, some other stuff has somewhat overshadowed it.

I recently asked my fellow bloggers over at Zatu games what their favourite Tiny Epic games were and they all offered up something different. This suggests to me that there will be a Tiny Epic game for you.

So what is a Tiny Epic game? Well, Tiny Epic is a growing series of small box board games designed by Scott Almes for Gamelyn Games. Each box is packed with more gameplay than you would expect, often more than a big box game. Tiny Epic Tactics is no exception so settle in and let me tell you a bit more. 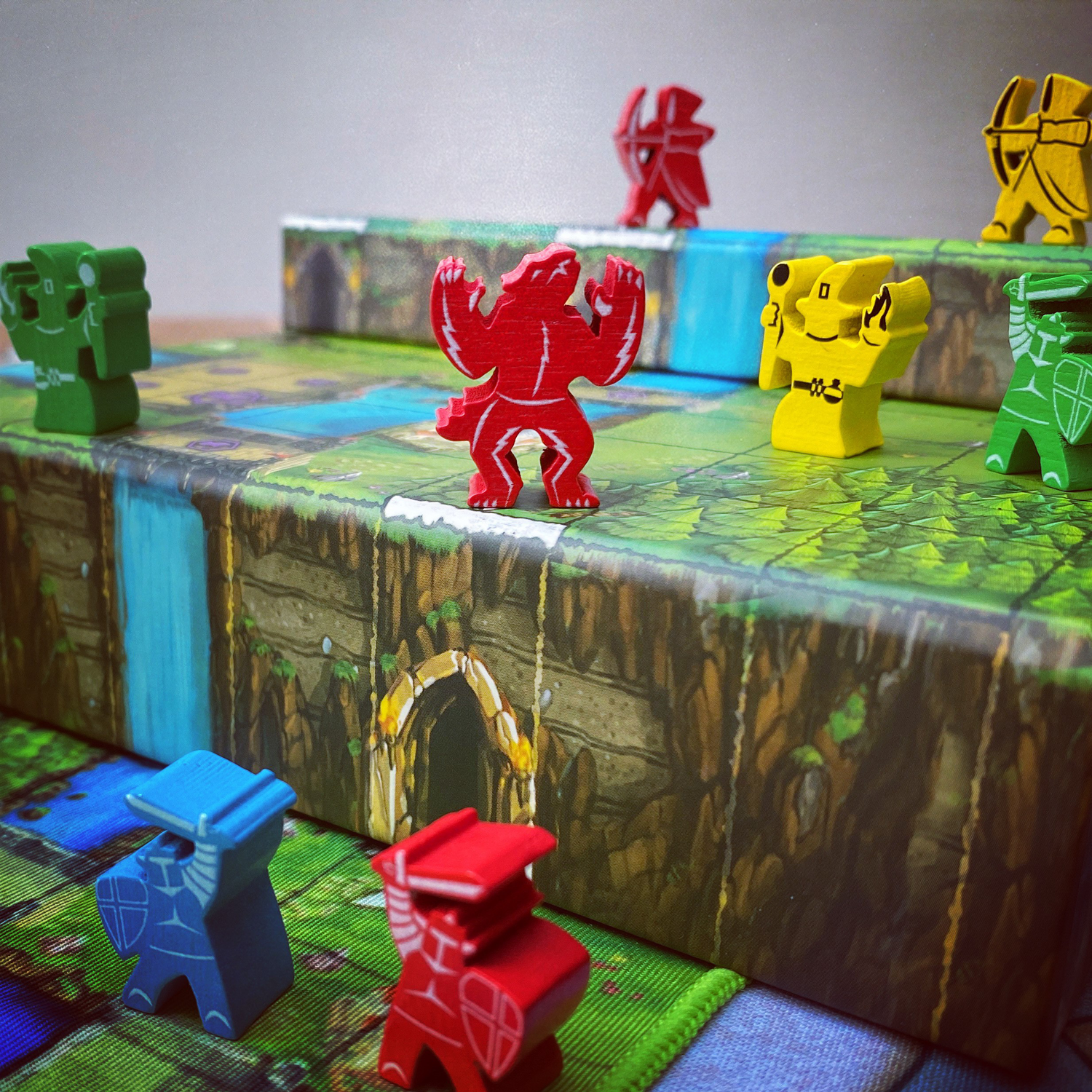 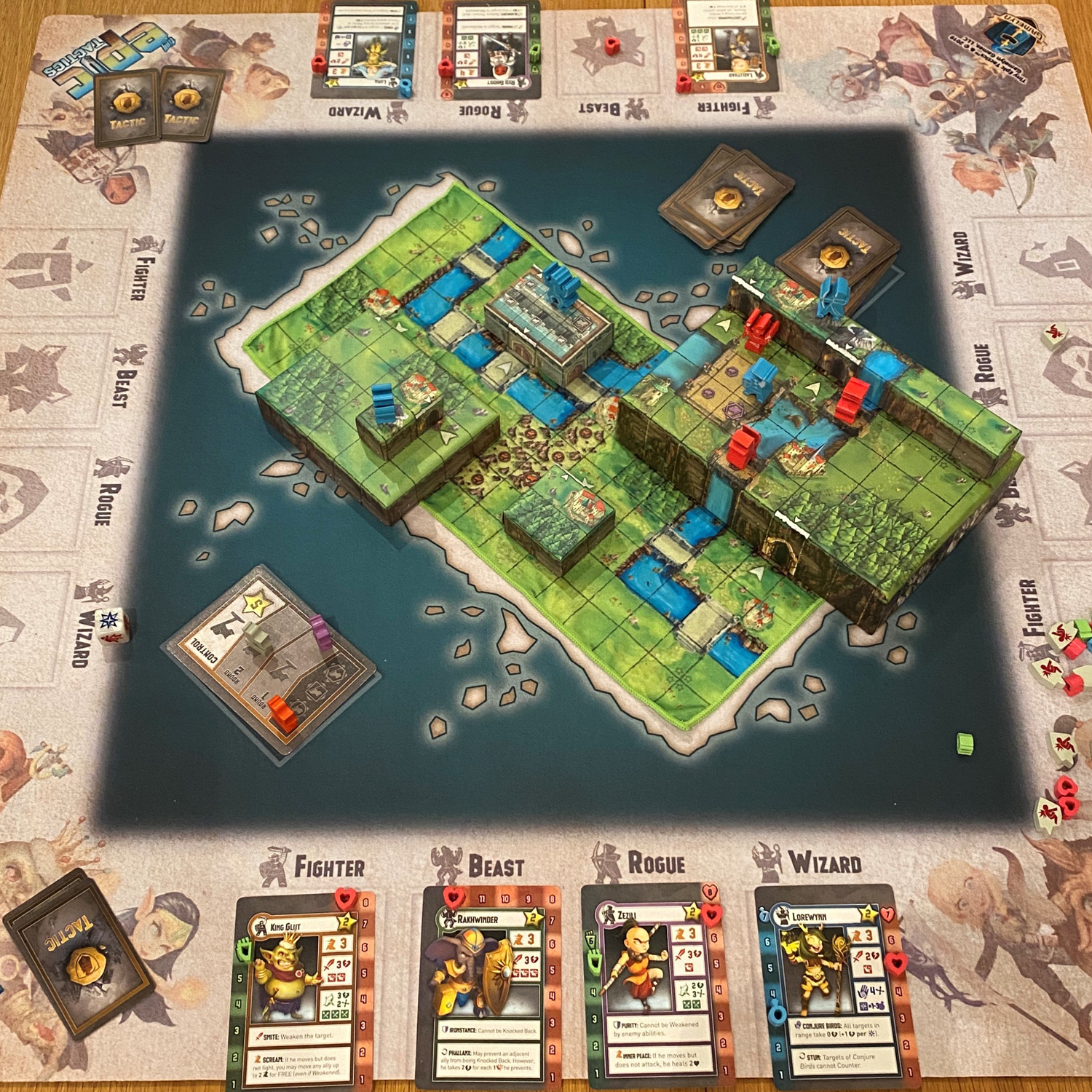 Like many Tiny Epic games there are multiple ways in which you can play. This makes it tricky to tell you about the gameplay as it chops and changes, but I have attempted to break it down…

On your turn you have three actions to use and four options to choose from. You can move, perform a melee attack, attack someone at range, or cast a spell. Your unique character conditions will affect some of these options.

There are Tactic cards in the game that give buffs if used in certain conditions. Players can only hold two at any time and may pick one up at the end of their turn. 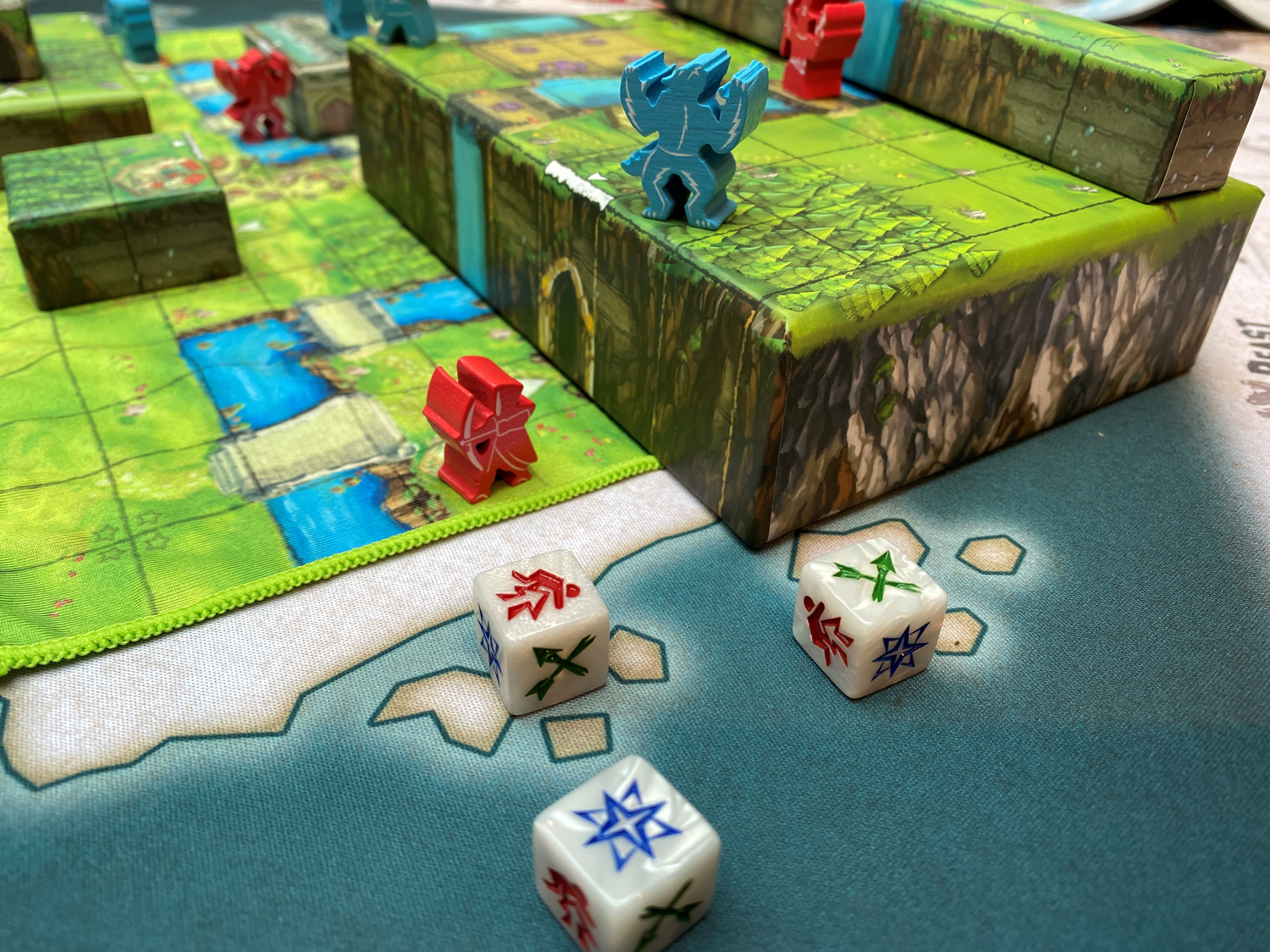 This feels like the main game with other gameplays feeling more like variants. To win the competitive mode you need to control an area. Players will be competing over three territories that grant flags. Depending on player count, when a certain number of these flags are captured the game ends and final scoring begins. Capturing a flag grants you 5 points, but to do so, you will have to have a majority in that area. Other points are scored for having your units survive or capturing other players’ characters. You can even get a point for every unit that ends the game in a village.

In battle modes you have to capture a flag and the emphasis is put on capturing opponents too, the area control element doesn’t apply and the map can be arranged however you want.

The adventure mode allows for single and two-player co-operative gaming. The adventure mode revolves around a series of crystals. The landscape changes and dungeons are introduced. These are the interiors of the hills (or the underside of the boxes if you have no imagination). Your enemies are automated. 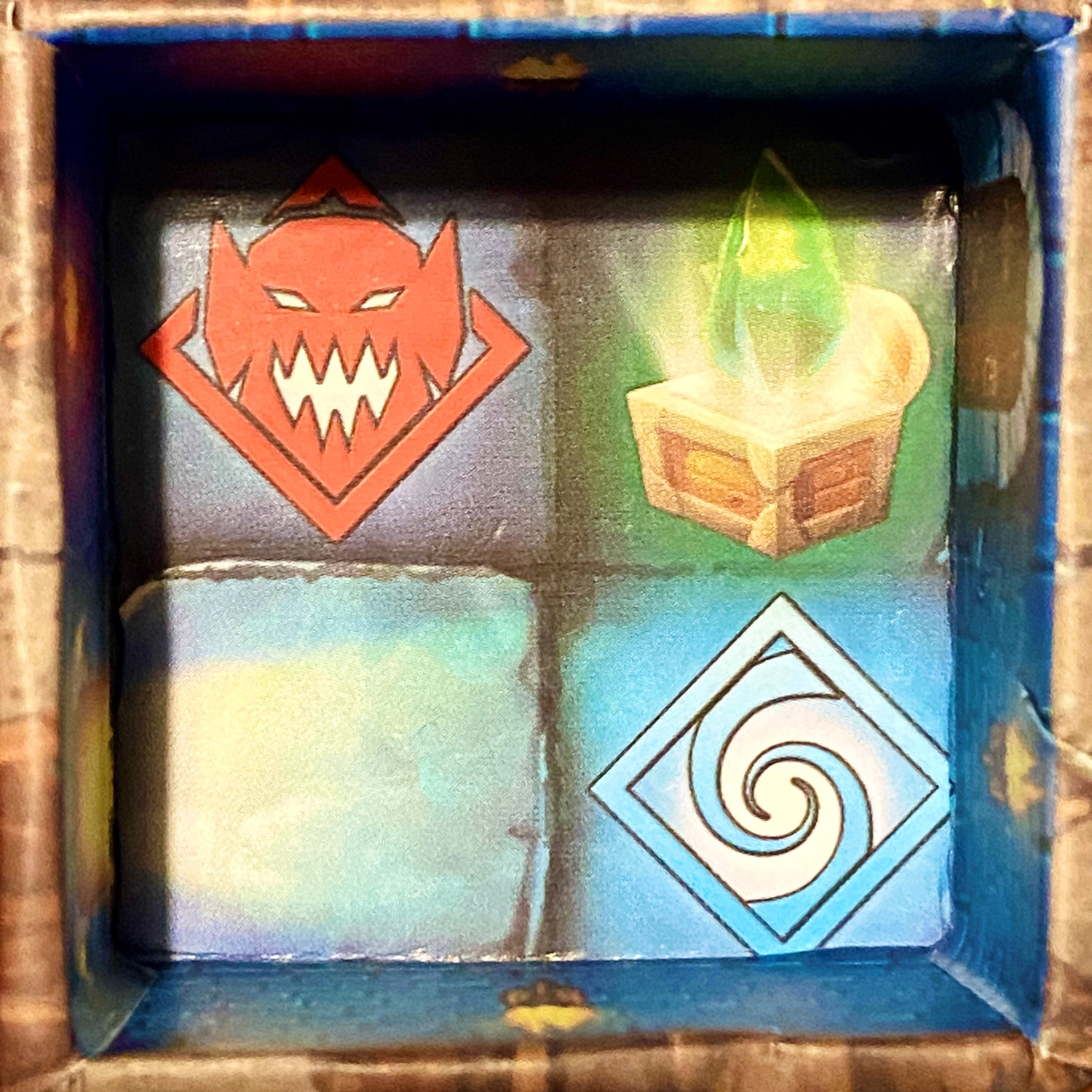 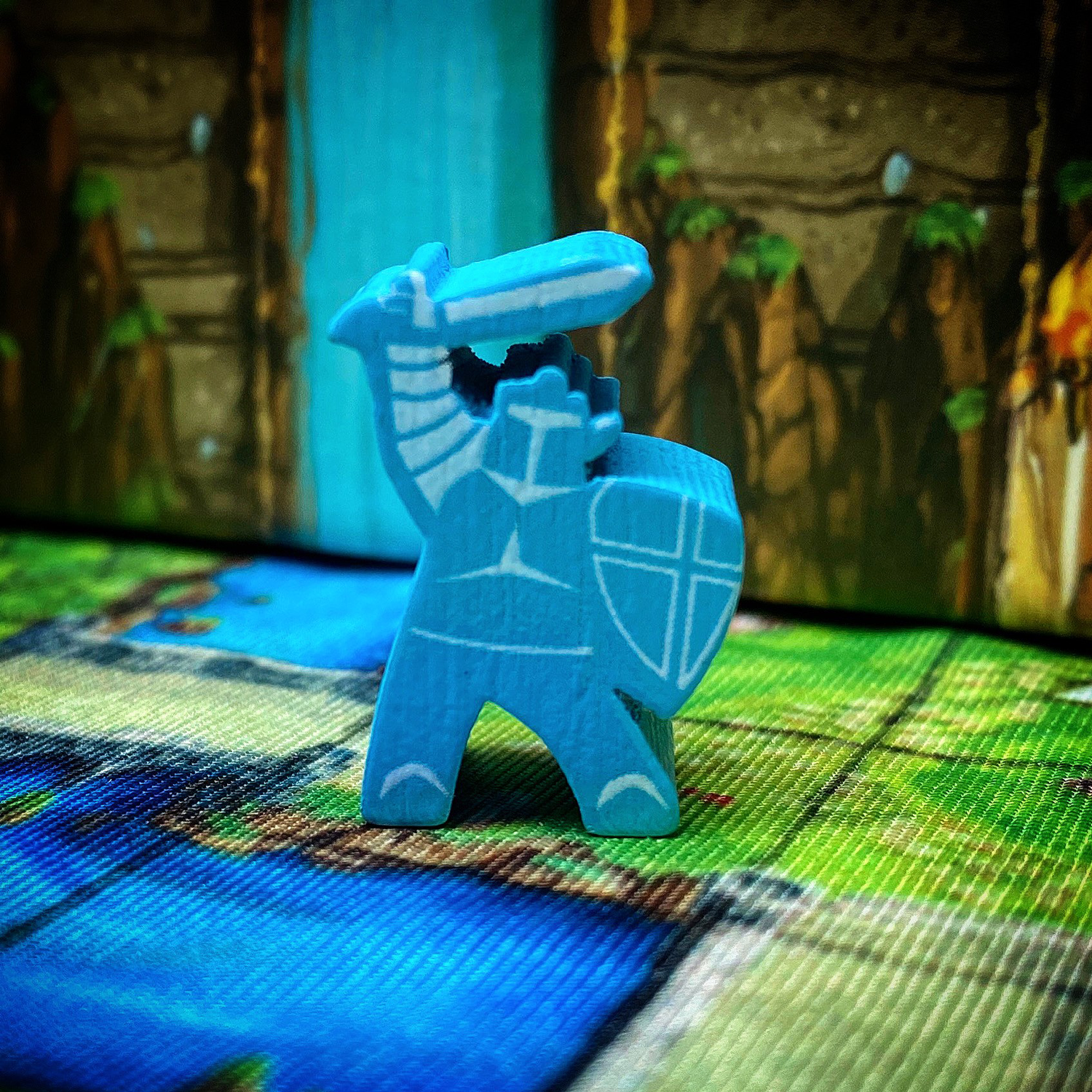 All game variants will see you take four heroes: a Fighter, a Wizard, a Rogue and a Beast. These grant unique abilities to your characters and creates asymmetric gameplay. Although, you are all competing for, or working towards the same goal.

Each character has their own card that gives you their health, movement allowance and other stats and special abilities, but there are general rules that apply to each type:

Fighters are generally quite well rounded and can usually do an okay melee and a pretty poor range attack, the latter costing ammo.

A wizard will be doing range attacks with potions, these cost mana which is indicated on the player’s card.

The Rogue will be doing range attacks, although they can usually do a weak melee attack too.

Finally, the Beast is as it sounds. The tank of your squad, he can take some damage, but he can also do some damage at close quarters with his melee attacks and generally stronger push backs.

The 3D terrain literally grows from inside the tiny box and all of a sudden you will be staring at a mini role playing game world. It’s like spawning a new world in Minecraft or SimCity.

The map incorporates some pretty cool elements that change the game. Firstly, there are hills, these hinder movement but change range attacks too. There are three printed peaks on the map, these give you the high ground, not morally, literally. The peaks allow ranged and magic attacks to have infinite distance, so it is well worth clambering up to.

Villages will heal anyone passing through by four hearts, and restore ammo and mana to maximum. Portals are pretty cool ways to travel, go in one and come out at any other one on the map that is not blocked by a player.

Rivers are harder to pass through and units in water will hurt more from attacks. Hiding in a forest provides you with extra cover and you will take fewer damage from attacks as a result.

Finally there is the Ballista, this is a tower of power as you might expect. It guarantees damage and a push back on a player within range.

Gamelyn have produced a map expansion to add further replay-ability to the game. This is available separately and offers two entirely new maps.

It is easy to be intimidated by this small box game. As the result of so many ways to play, it feels like there is a lot to learn. Similarly, with each character having their own abilities, this adds to the complexity. Once the rules are mastered and you can interpret the character abilities and Tactic cards with ease, the game itself is easy to pick up, play and even teach. My eldest son, Harrison (12), can play and be competitive despite the age on the box being 14+.

Because of your limited actions, play passes around fairly quickly. It is quite a thinky strategic game so there may be a bit of time between turns, but most of it will be spent planning your next move.

For me, the sweet spot was three players, four dragged ever so slightly between turns. Two player was very good too, but I liked the mix of the third player giving more quandaries to solve.

Tiny Epic Tactics will be one of those games, that if it hasn’t been to the table for a while, you will probably find yourself needing a rule refresh, more so than with some other games.

There have been some truly epic moments when we have played. I have seen victory look all but certain, but with a player ability and a tactic card all of a sudden the win has been thwarted. So in that regard the game lives up to its name! 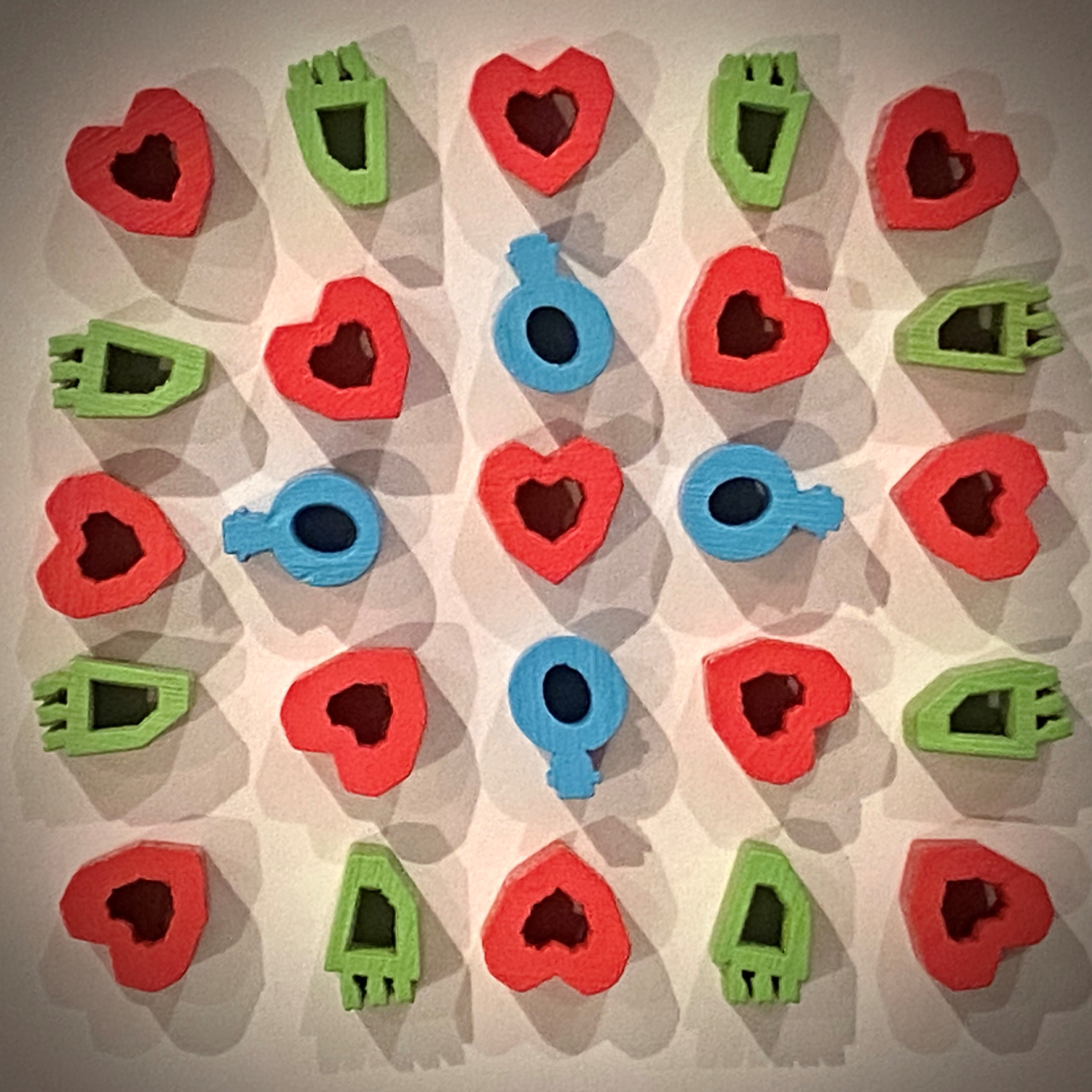 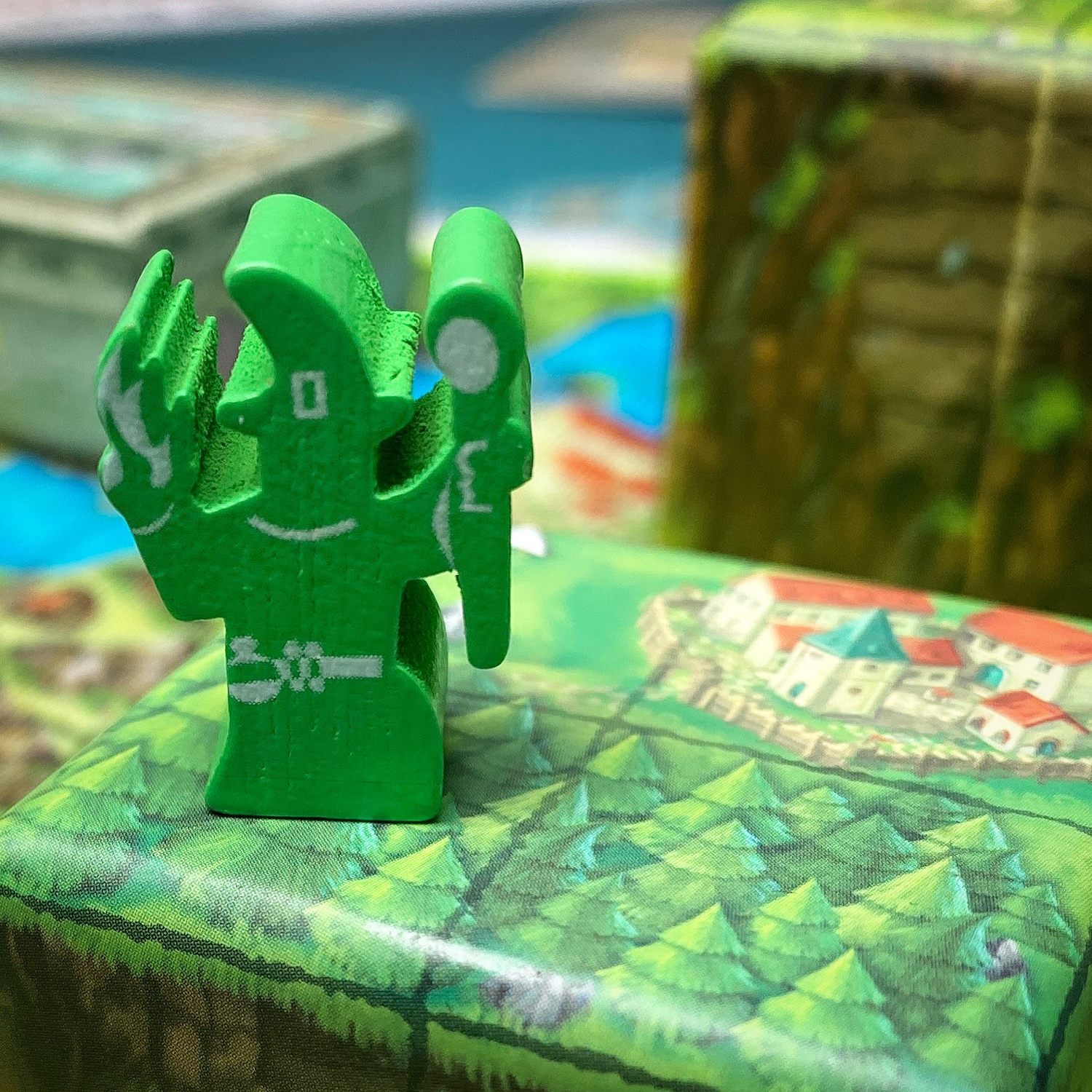 Don’t be fooled by the size of the box, it is dense with quality. While the 3D map that builds up is pretty darn cool, the meeples are the talking point. These printed wooden miniatures in their bold colours and striking poses are magnificent. They do completely steal the show but the quality of the wooden markers for health, ammo and mana are still superb.

I’m not so sure on the wooden Wounded tokens. They are fine, but the other components set the bar pretty high and these don’t quite match for me personally. The printing on the fabric base is not as strong as I would like either. I wish this was a little bit better quality personally.

The cards have some fabulous artwork which really captures the spirit of their special abilities. The dice have a really nice pearlescent finish that you will like too.

If you upgrade to the game mat (available here) everything has a lovely neat home. Whilst not essential, I would miss it if I didn’t have it anymore and can’t really imagine the sprawling mess that might be your gaming table without it!

I was also lucky enough to get the Kickstarter Lanterns mini expansion (exclusive to Gamelyn and available here) and the Maps Expansions available separately. I would deem both of these nice to have, but certainly not essential. I will also mention that the expansion maps are not the same rigid cardboard as the base game, which leaves them a little flimsy on the mat.

The rule book is clear and concise. There is a lot to take in, but the rules do their best to break it all down into manageable segments. Explaining the flow of the game and the different game modes.

It would be easy to be lured into this game thinking, because of its small box, it would be an entry level game. For me, it is heavier than that, but not much heavier. The actions on your turn are limited, there is a lot to learn and even more to master. That said, I taught my 12 year old to play and he was arguably better than my wife, so I guess it depends on the players.

On reflection, I think it feels more daunting than it actually is. This is probably because I had to learn all the different ways to play. I still prefer the main competitive mode having tried them all and I think when I go back again and again to the same mode it will all feel much more familiar. As a result it will also feel much more enjoyable.

What I am saying in a roundabout way is, don’t let the rules and different game modes put you off. Your turns run in a sequence and will be second nature in no time. This will allow you to embrace the brilliant decision making and problem solving that the game forces upon you.

The strategy, will see you playing cat-and-mouse throughout the game, having to balance a mix of attack and defend. It is these tactics that define the game and make it  very good indeed.

This small box is a heavier weight game than many big boxes that I own. The variety of game modes and characters add to an abundance of replay-ability. I will often get it to the table because ‘I haven’t played it in a while’ but when I do, I really enjoy it.

If you already own Tiny Epic Tactics and enjoy it, or are looking for other inspiration, you might also like these similar games: 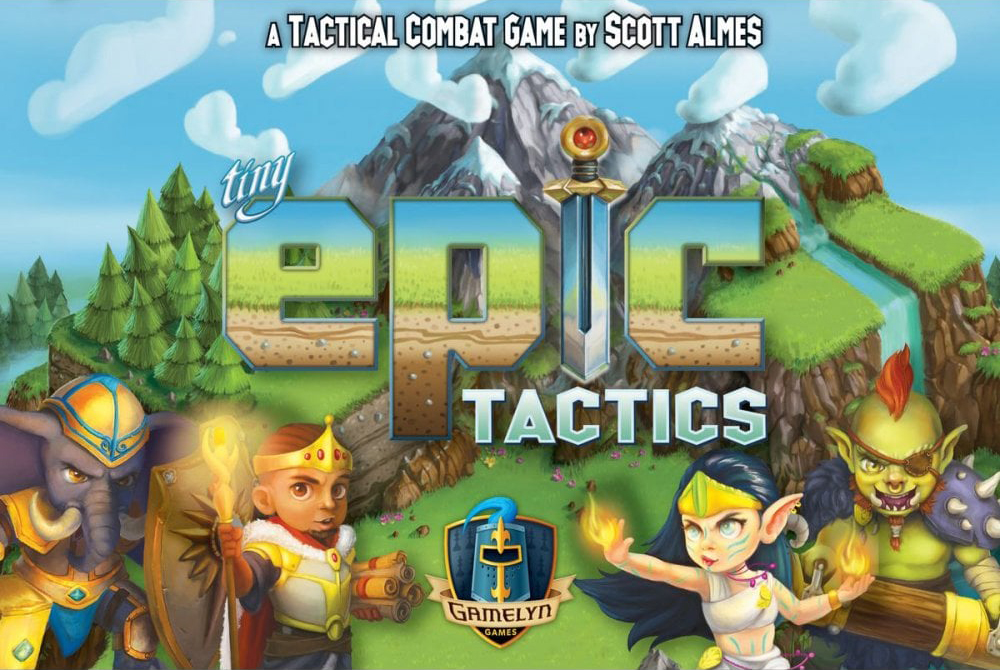 For clarity. We don’t get paid for our reviews. We were kindly gifted this game by Gamelyn Games, this has not affected our review in any way.

Explorers of the North Sea Review