Advert: this game was gifted by Holy Grail Games, this has not affected our opinion.

I’m not going to try and style this introduction out. I was properly revved up to try Rallyman GT board game. Staring lustfully at the beautiful massive helmet on the front of the box, I knew I wanted to play with it. Lots.

The trouble was, having missed the Kickstarter campaign I was a mere spectator to all the awesome posts of others playing it. I realise that I am therefore far from the first over the line with a review of Rallyman GT. However, that hasn’t deterred me from buckling up to write a review.

In the immortal words of Murray Walker, this review is go, Go, GO! 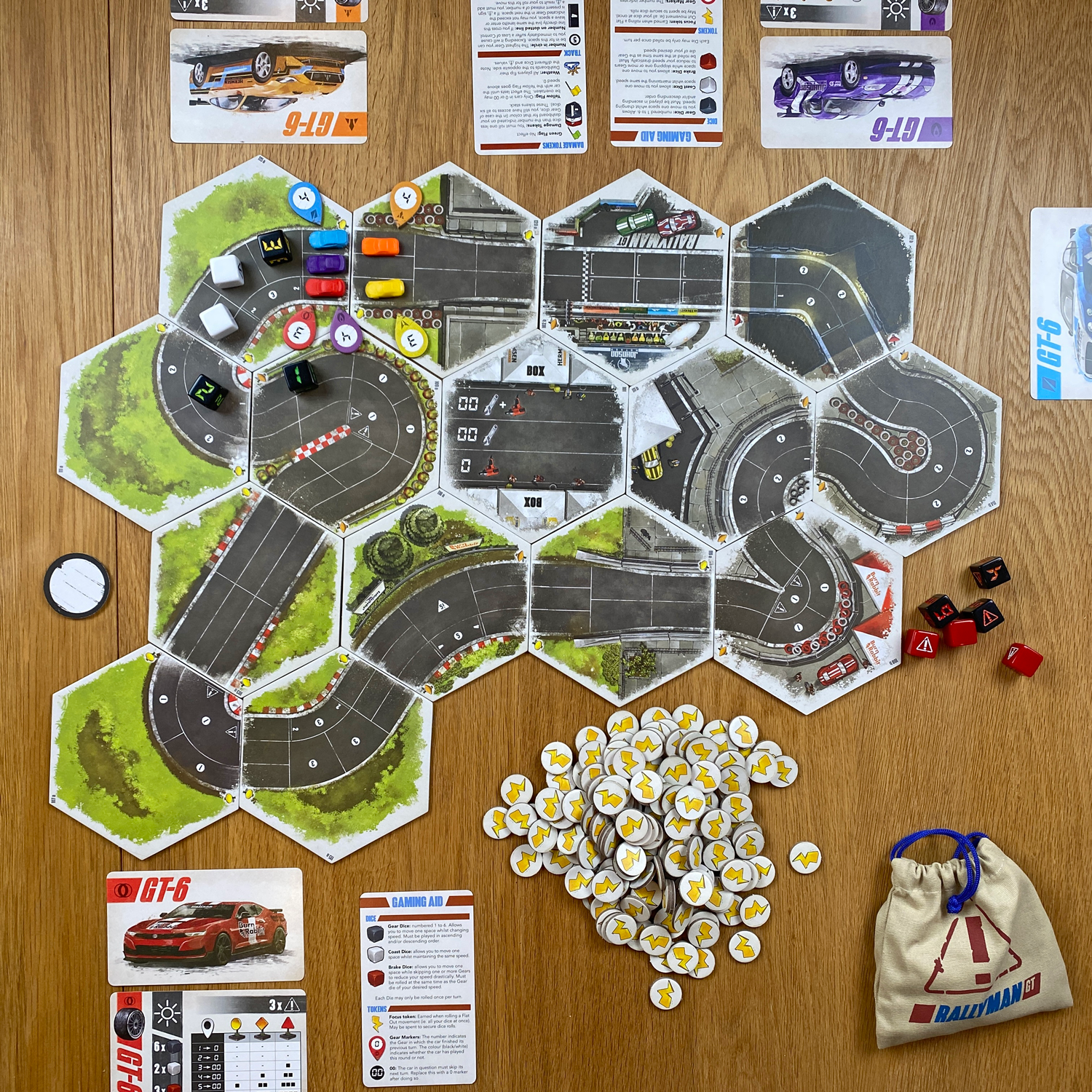 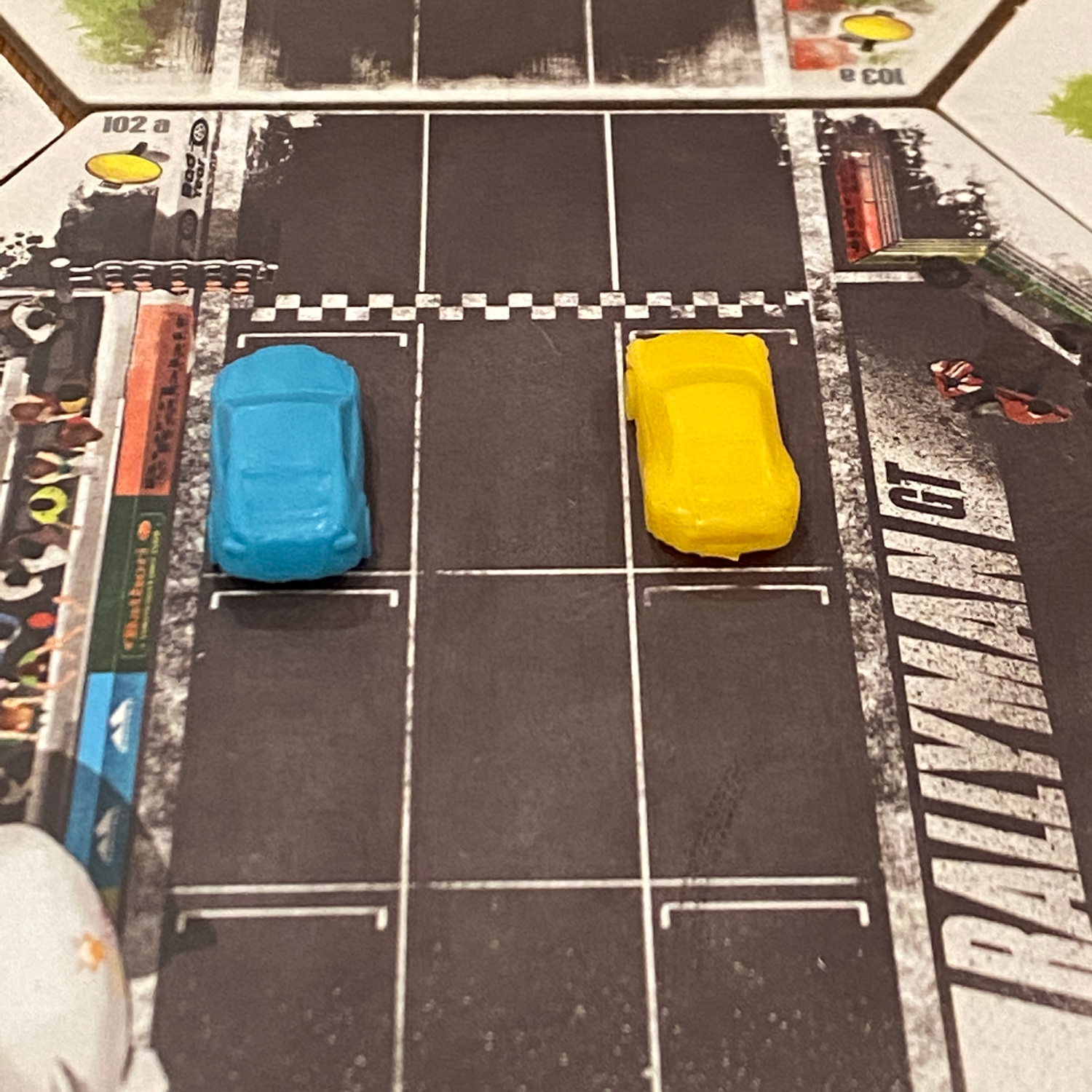 Setup involves arranging a number of the 32 double-sided hex tiles in a predetermined way offered in the rulebook, or freestyling your own wild racetrack. Players then choose their colour and collect the corresponding tokens and dashboard. Determine the turn order and place the miniature cars on the starting grid in that order. Finally, place the bag of damage tokens nearby, hopefully you won’t need it, but it needs to be in reach! 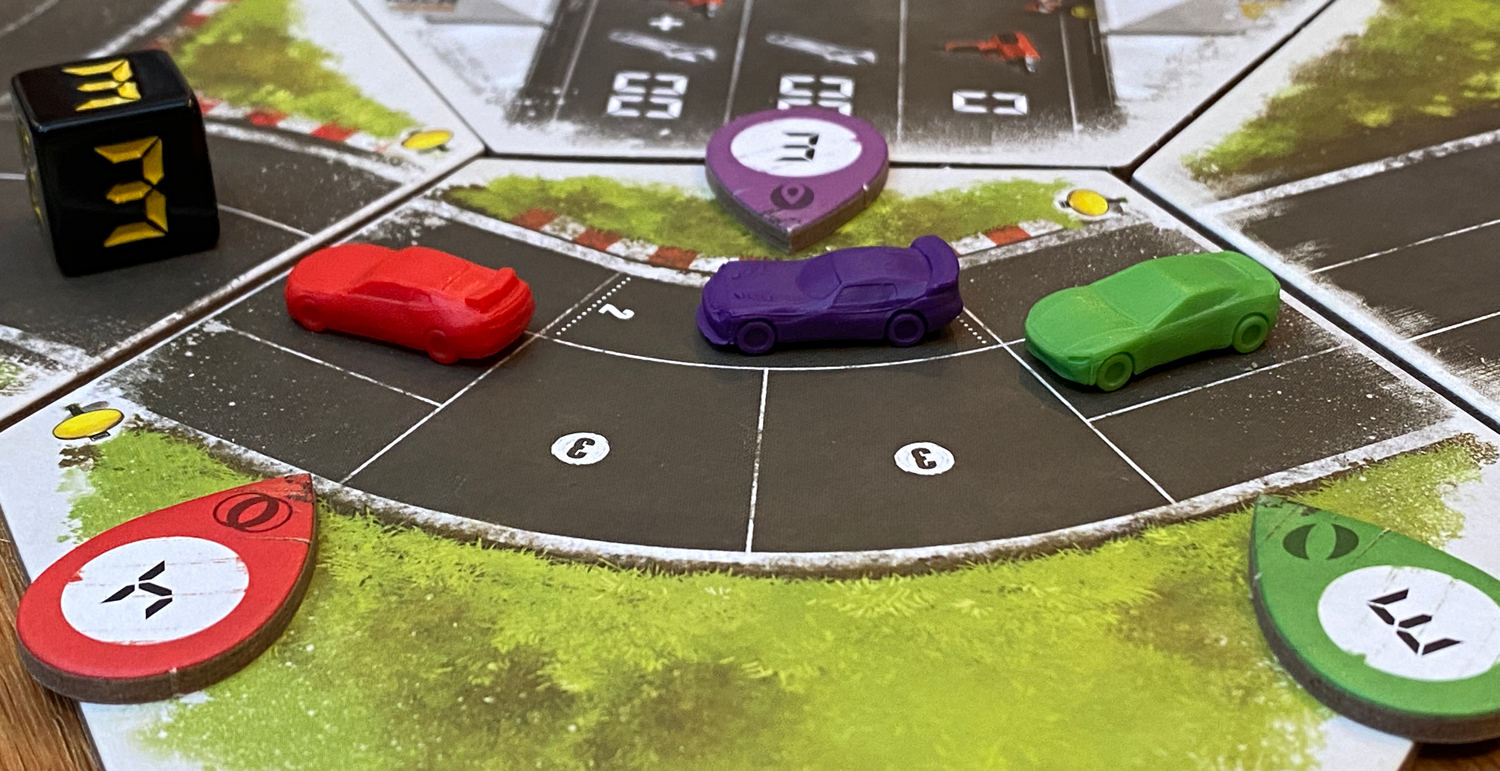 On their turn players plot out their route along the course using a series of numbered dice that represent ascending and descending gear changes. There is also some coast dice that maintain the same speed and brake dice that allow you to skip down the gears quicker. Once you have optimised your journey along the track you then have two options. Roll the dice individually and play it safe, or go flat out and risk an accident. Each dice has one or two hazard symbols on it, rolling a certain number of these would cause a loss of control and maybe an accident. That’s why rolling them one at a time is safer as you can stop along your route at any time. The risk of going flat out however, has its own reward in focus tokens.

Focus tokens can only be obtained by going flat out. These lightning bolt tokens can be used when rolling the dice one at a time instead of rolling them. Needless to say there are times where they are really useful. 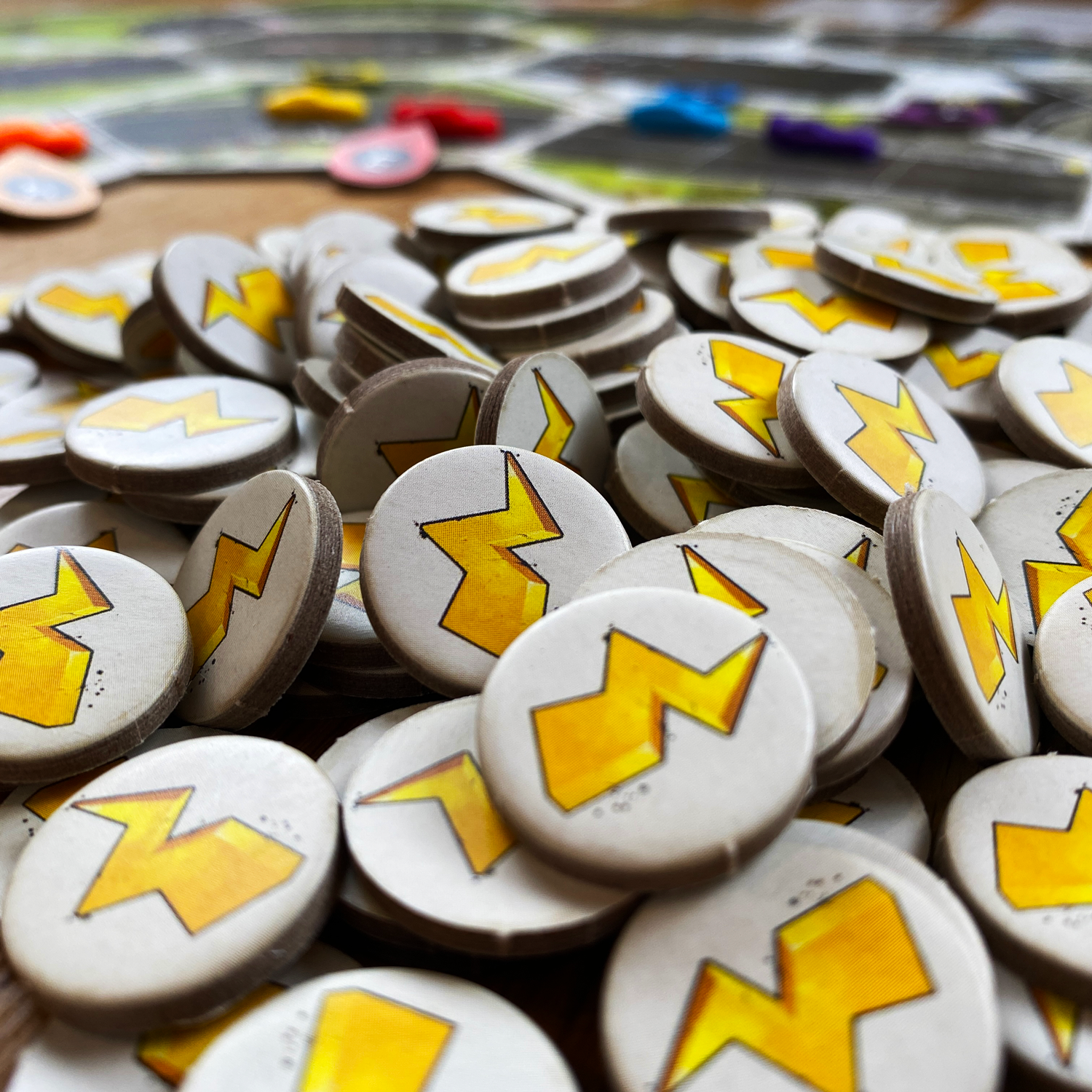 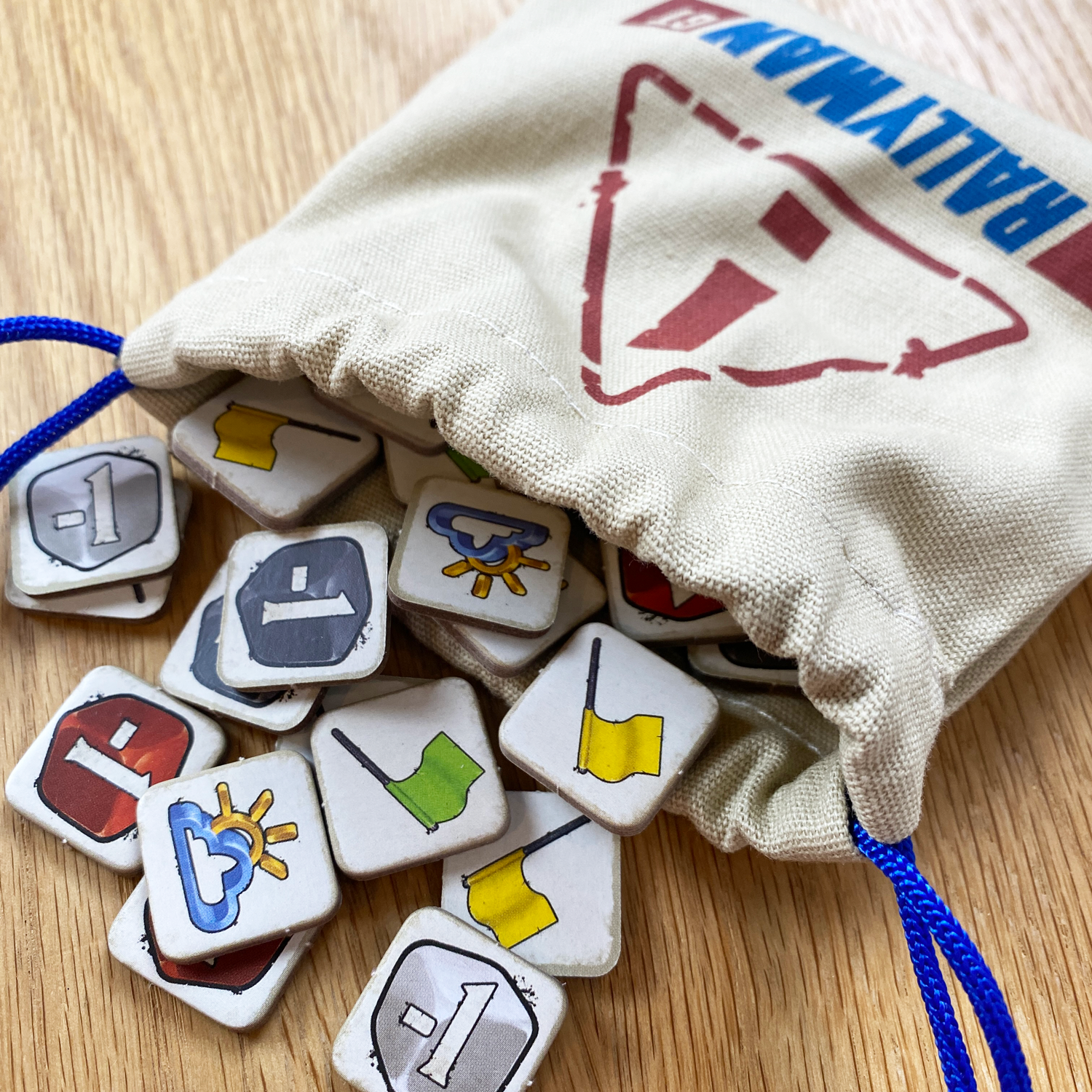 Further complexity to your lap is added with some of the corners. Rallyman GT recreates the racing line and so you have to be traversing in a certain gear to successfully navigate them. Overtaking can also be tricky. For authenticity, you need to be travelling at the same speed or higher than the car you want to overtake.

Turn order changes each round, with the player travelling the fastest going first, and the slowest last, if players are tied for speed the player in the lead will go first and if they are level, the person on the inside lane goes first. With only one car allowed in each square you also need to ensure you aren’t blocked.

First across the line and the furthest beyond it, is the winner, unless you are racing more than one lap. Which you could, as long as you had decided that at the start and not just before someone other than you was about to cross the finish line! 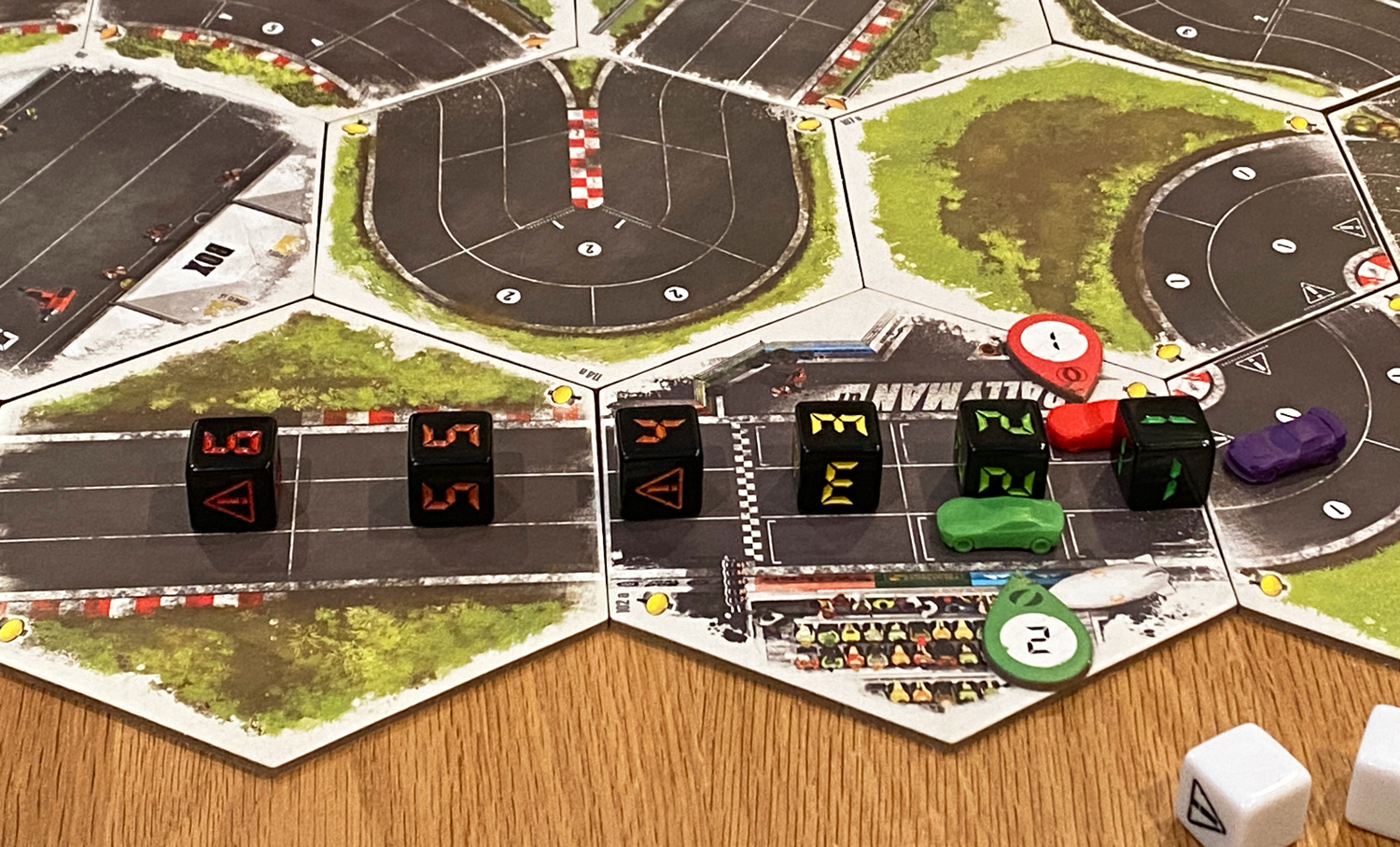 Racing games come in all shapes and sizes. Most of them are a fun romp around a board, like Camel Up or Unicorn Fever. Rallyman GT isn’t that sort of racing caricature, it’s more akin to a racing simulation. It is the board game equivalent to the video game Gran Turisimo, rather than say Mario Cart.

Early plays felt like it was a case of dropping down to the lowest gear and then speeding up to the highest gear, but further plays highlighted other factors that need to be considered.

You have to strategically plan your turn, making sure you are travelling in the correct gear at the correct time to overtake or navigate a corner. You will also want to consider your speed for the turn order of the next round. There is risky push-your-luck by putting your foot down and going all out. All these factors ensure that your turn in Rallyman GT needs to be carefully considered and planned.

In this regard, I can understand why some might feel it loses a little of the speed of a race. It can leave the impression of being part of the crew stuck in the pit lane rather than behind the wheel of a car careering down the tarmac. I guess that is why it feels more of a simulation to me.

That isn’t to say races aren’t tense, they can be. However, just like a Grand Prix the person in pole position does have an advantage. There will be few overtaking opportunities without careful forward planning.

You also can’t push your luck too much. Crashes, just like the real thing, are devastating. A crash is so punishing that there is virtually no coming back from it, except in longer races. Oh and I should also mention I haven’t played the solo game. 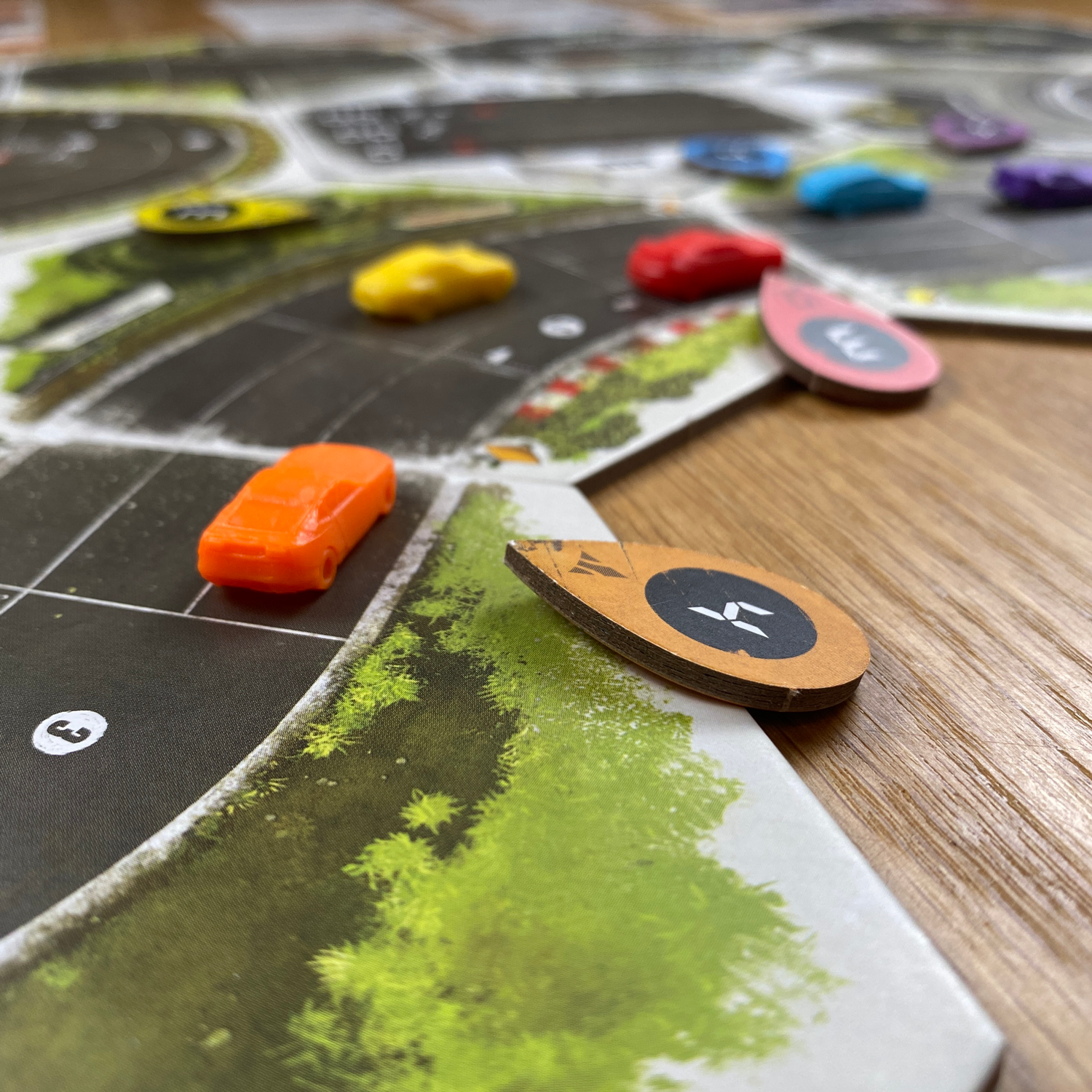 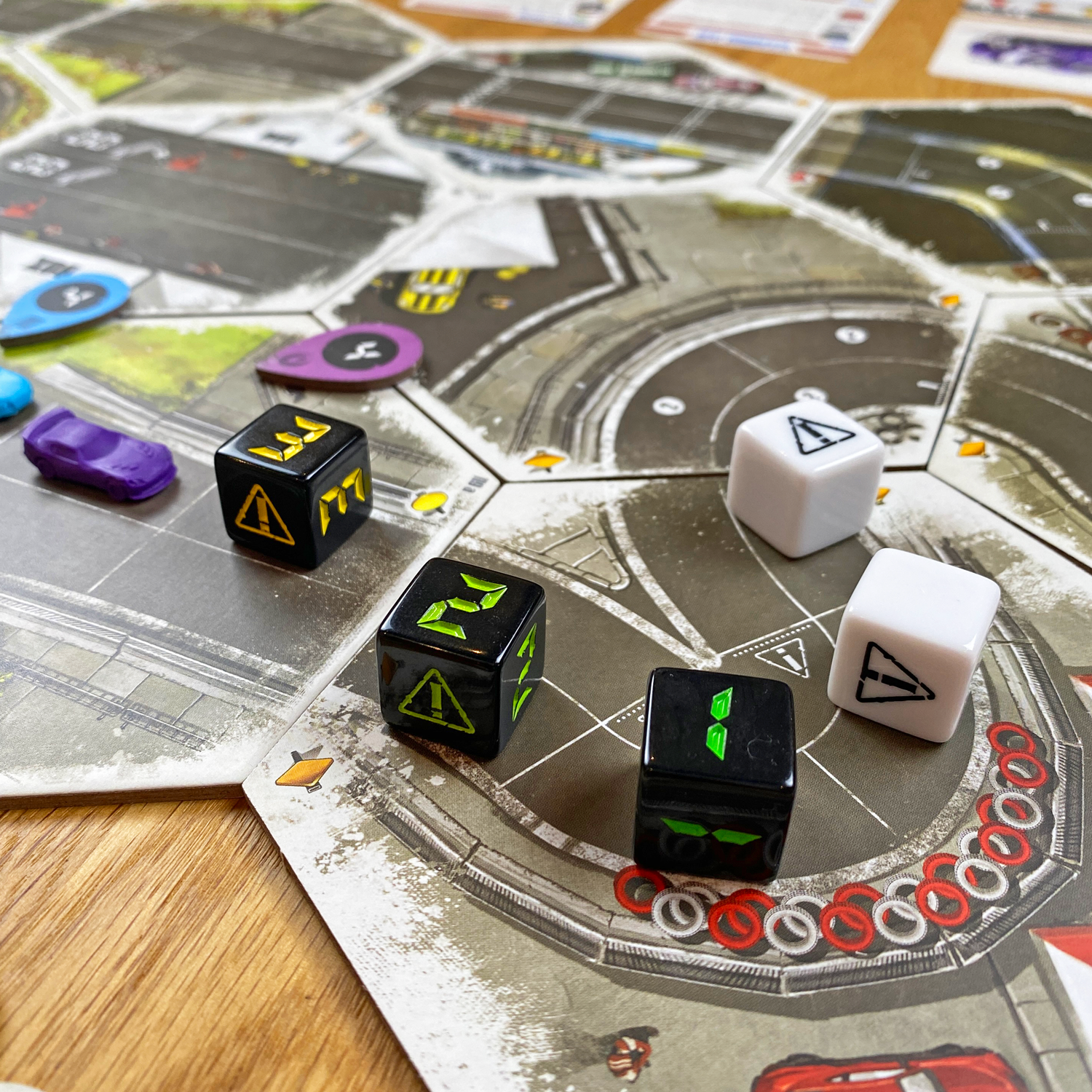 Rallyman GT is a glorious production. I love the setup, it reminds me of creating Scalextric courses as a kid, but unlike my childhood, there is plenty of track so you can create the race course of your dreams. Tiles are double sided with a rural and more urban side. The latter being a bit trickier. Once set up, Rallyman GT will demand your attention with its cracking illustrations and intricate design of narrowing lanes and tight corners.

The individual little cars are super cute and more are included with expansions. There is even a miniature classic mini in British Racing Green that made me very happy indeed. The dice are substantial and really nicely styled. In fact the theme oozes from the game, in that regard it is fantastic.

The rule book is perhaps a little daunting in its comprehensiveness. It is certainly a game I wish I had been taught. Not because it is tricky. There is just a lot of details around corners and crashes that seem more complex than they really are, as soon as you fathom they imitate the racing line then it all starts to make sense.

Don’t expect an insert in Rallyman GT, the tiles and cars are going to slosh around inside the box like a… a box full of hexagonal tiles, markers and cards. I could’ve done with a better sloshy analogy there sorry. 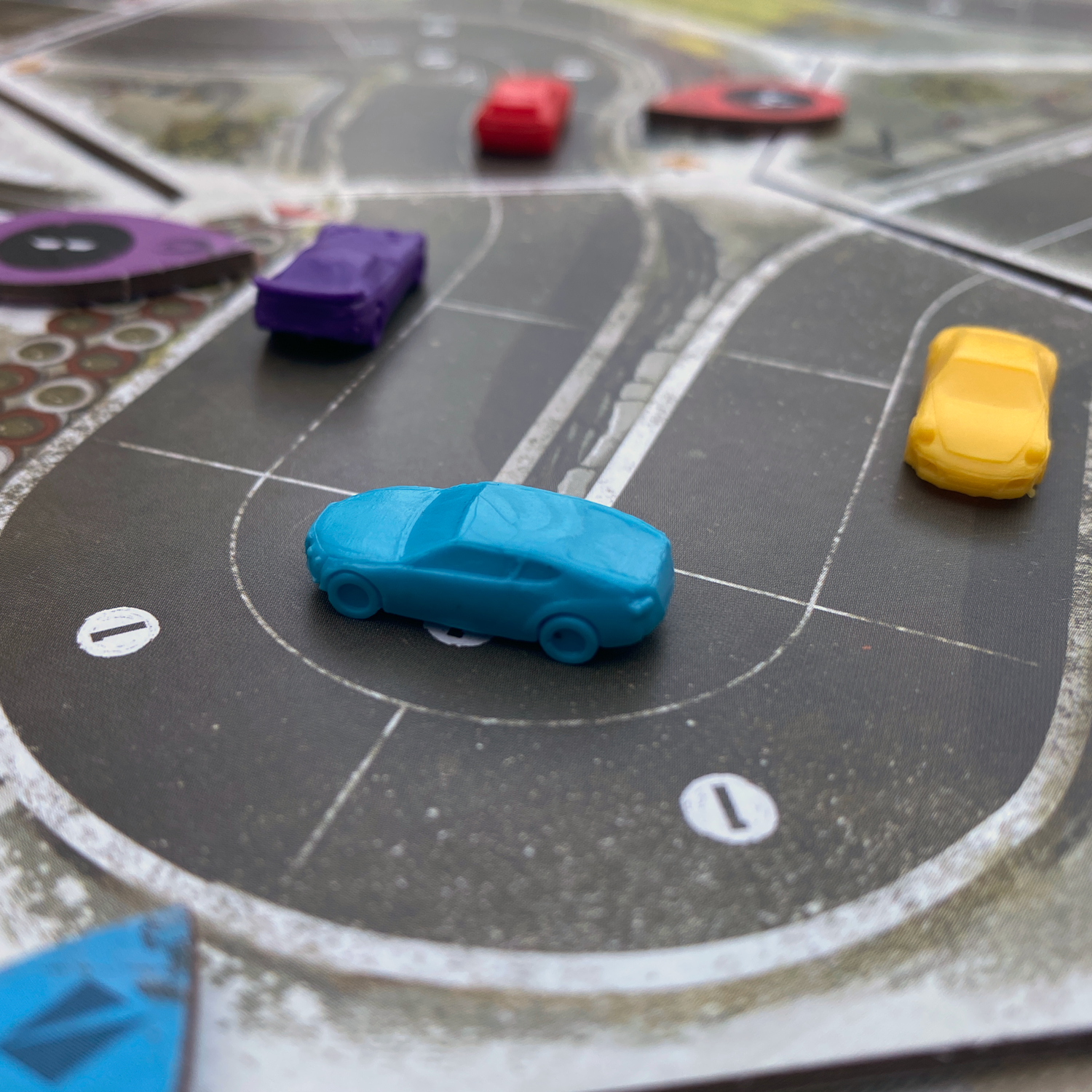 While the game can be adapted in terms of playtime and length of track, a longer track or two laps of a shorter track is certainly where it plays best for me. Rallyman GT plays between two and six people, and shines with four players. At this player count downtime is reduced, but all tetchy strategy of blocking and overtaking really comes to the fore.

I’d prepared for a more strategic style of gameplay and knew quite a lot about it, Rallyman GT was not going to be a party racing game like some. I’m not sure I had fully prepared for the simulation-esque puzzle-like gameplay that it offers. Mistakes, like in a real race, can be punishing, and this is a tactical battle for first place that may not be for everyone. Those that like the sound of it though, shouldn’t be disappointed.

Everyone I have introduced to Rallyman GT has enjoyed it, none have fallen in love with it. Overall, I think it is a really good game. It lacked a bit at two players, but when you scale up to four with a slightly longer track Rallyman GT provides moments of dice laying genius that makes you gasp and even applaud. There is certainly more to think about than meets the eye the first few times you play it. It is also a joy to look at. I’m already looking forward to Rallyman Dirt, a different iteration where players are against the clock as well as each other!

See you at the chequered flag!

Rallyman GT is a solid game. It beautifully embodies the racing theme with a tactical puzzle gameplay. The modular board offers oodles of replayability too. For me, this game shines more when played in a four over a longer course or more laps.

If you already own Rallyman GT and enjoy it, or are looking for other inspiration, you might also like these similar games:

The Quest for El Dorado Review