Advert: this game was gifted by Coiledspring Games, this has not affected our review.

Helvetiq have been producing a few small box card games recently. My board game storage situation is a little problematic, so anything that doesn’t take up much room is a very big bonus! I particularly liked Bandido from them, so I was therefore interested to see what Misty was like.

I try to be a fairly relaxed Dad to my three boys. I try and strike a balance between being fun where I can be, and stern when I need to be. I try and be calm, cool and collected. After all, I realise I probably used my fingers to eat my food, left my clothes in a heap on the floor, forgot to flush the toilet and never hung up my towel either. Don’t tell them that. However, there is one thing that does grate with me probably more than it should…

Drawing with their grubby little fingers on the steamed up windows of my car. I know it is unreasonable, but those grimy streak marks repulse me. Don’t get me wrong none of my children have ended up on the naughty step for this behaviour, yet all three know this is not to be done in my car!

So why have I shared this? Well, the premise of Misty is that you are drawing on a steamed up window. The thought makes me shudder, like someone wearing a t-shirt and shorts in the freezer isle at Tesco! Being the consummate professional I will try to not let this influence my review…

Each player is dealt six cards. from this hand you will choose one card and pass the rest on to the player beside you. Those who have played Sushi Go Party or 7 Wonders will be familiar with this ‘take one and pass it on’ mechanic. For those unfamiliar, it is as easy as it sounds, however, the decision making of which card you want, balanced with what you don’t want to give an opponent adds complexity to what should be an easy decision.

The aim is to build a 3×4 or a 4×3 window. So when the first hand of six cards runs out, you deal six further cards and start the process again. When you have 12 cards laid out in front of you they magically come to life on the window and start to move. In this final activation round any card with an arrow moves one space in the direction indicated. If this covers another card the image becomes blurred and neither card is scored. After this any monsters will eat one flower on the same window if there is one.

Scoring is simple, each card not blurred are worth one point. Flowers not eaten are worth two points. Two smiley faces next to each other horizontally are collectively worth three points. Any cards that traverse off the board do not score. The player with the most points wins the round. The game is over when a player wins two rounds. 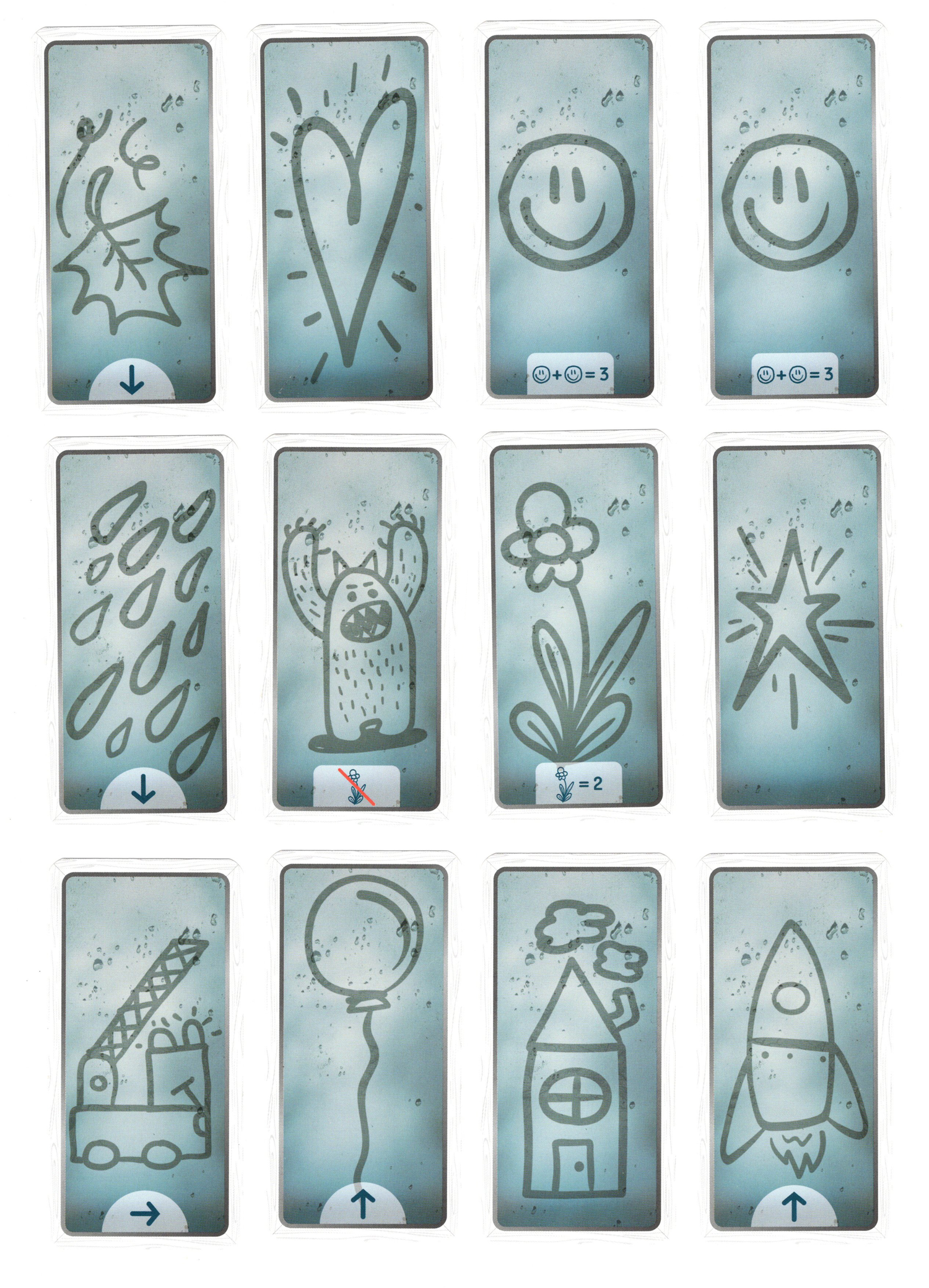 Misty - A Window Before Activation 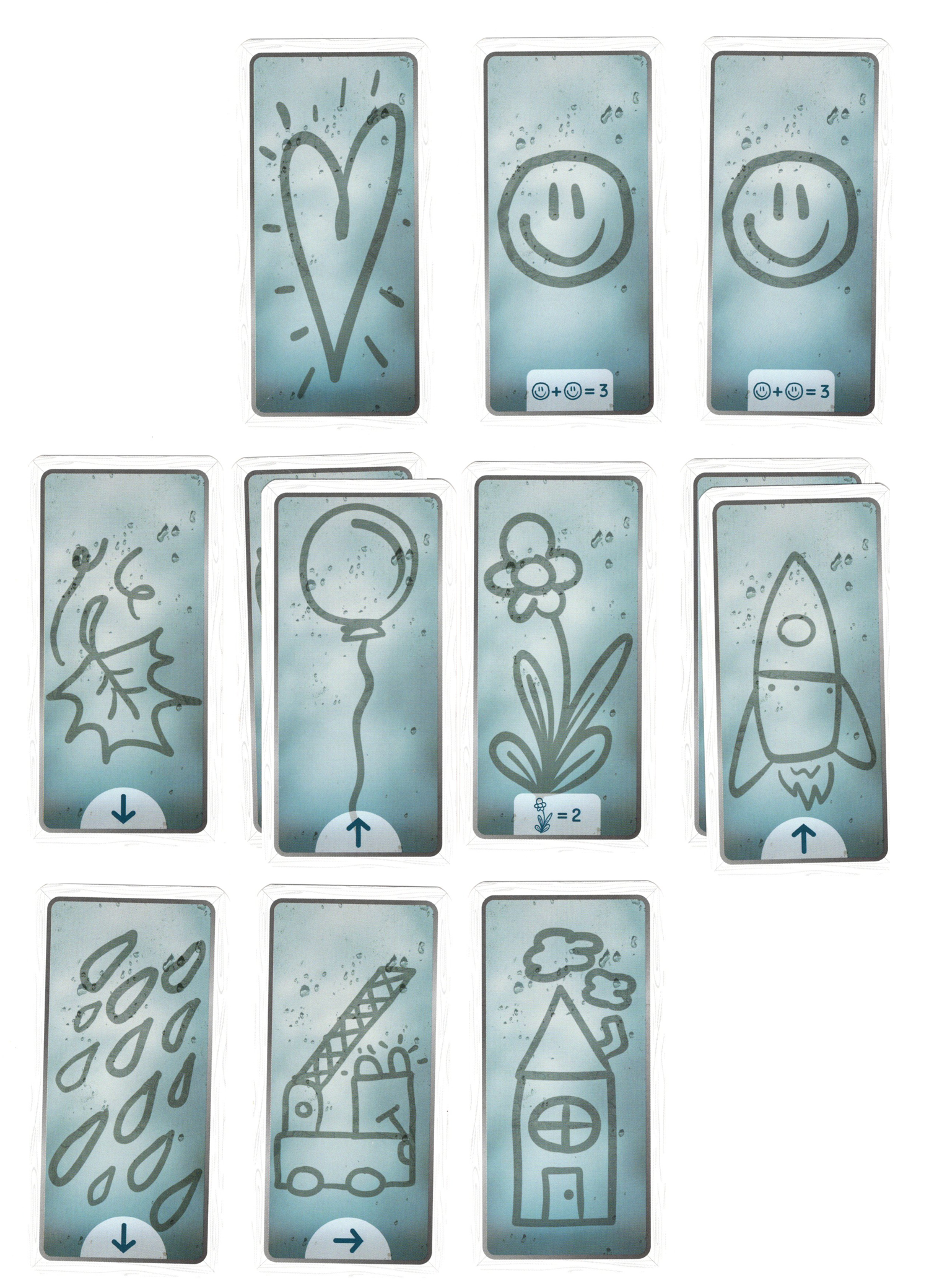 Misty - A Window After A Successful Activation

Misty plays exactly as the gameplay suggests. You have to think when placing cards as they can only be placed next to a card already laid. They can be placed diagonally from another card too. Ultimately, you want the perfect activation. To score the most points. Perhaps without knowing it, you will be planning basic coding. This hidden educational quality makes it excellent for children.

I like the take one pass it on mechanic, more professionally known as simultaneous action selection. I like the quandary when I really want a certain card and I really don’t want to give my opponents something good. This adds complexity to a very simple concept.

I also like the fluidity of the window, you will be planning a certain row and the cards you are passed means it backfires. So you might add a top row instead of the bottom row you were planning. You might also change from the 3×4 layout in your head to a 4×3.

The game says it is for 2-4 players, but the pass and play cards lose most of their mystery in a two player game, this does allow for more planning and more scheming but isn’t quite as good. I probably wouldn’t buy it if I could only ever play it at a two player count.

Misty is for ages 6 plus and this seems fair, but I think you need to be a bit older to be truly competitive. 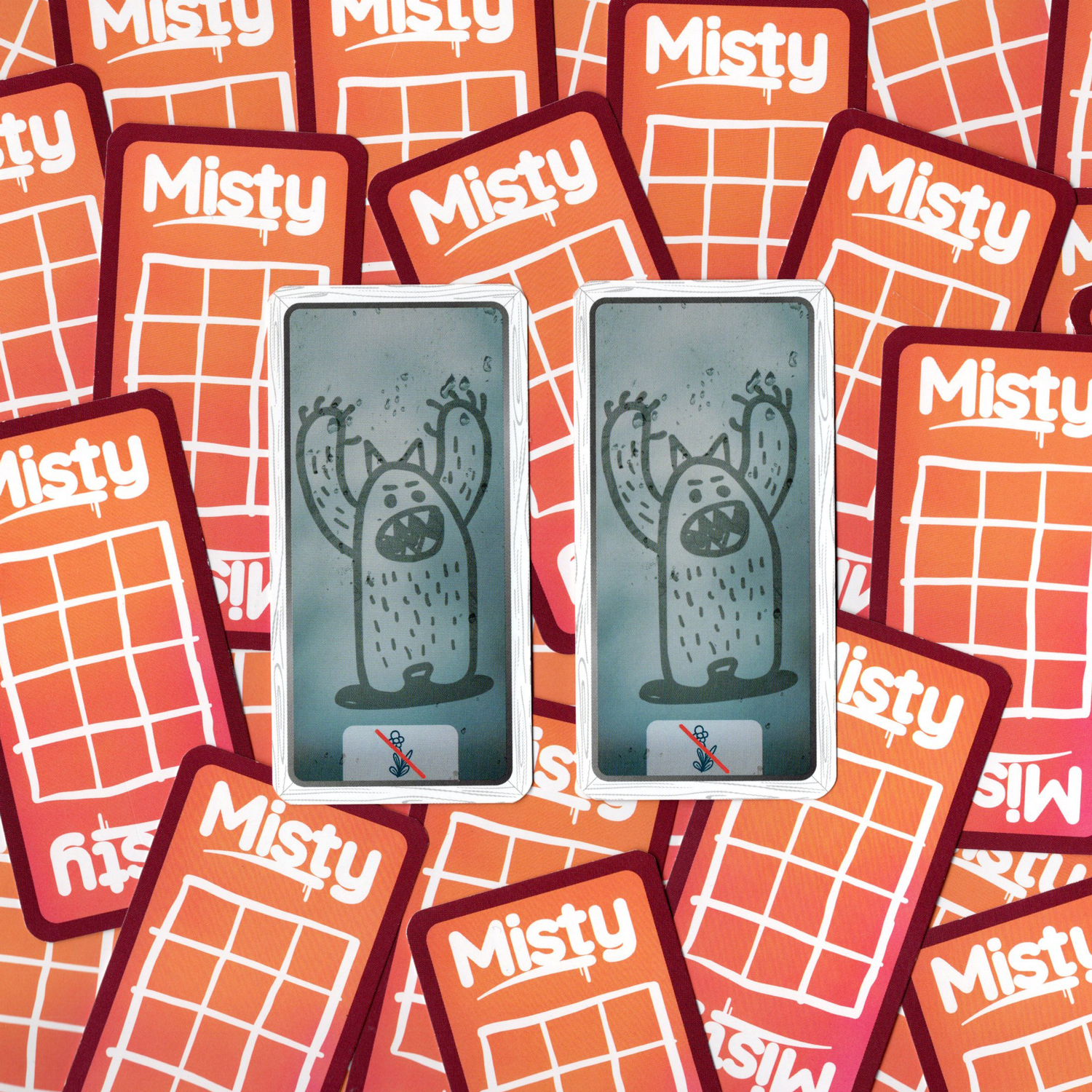 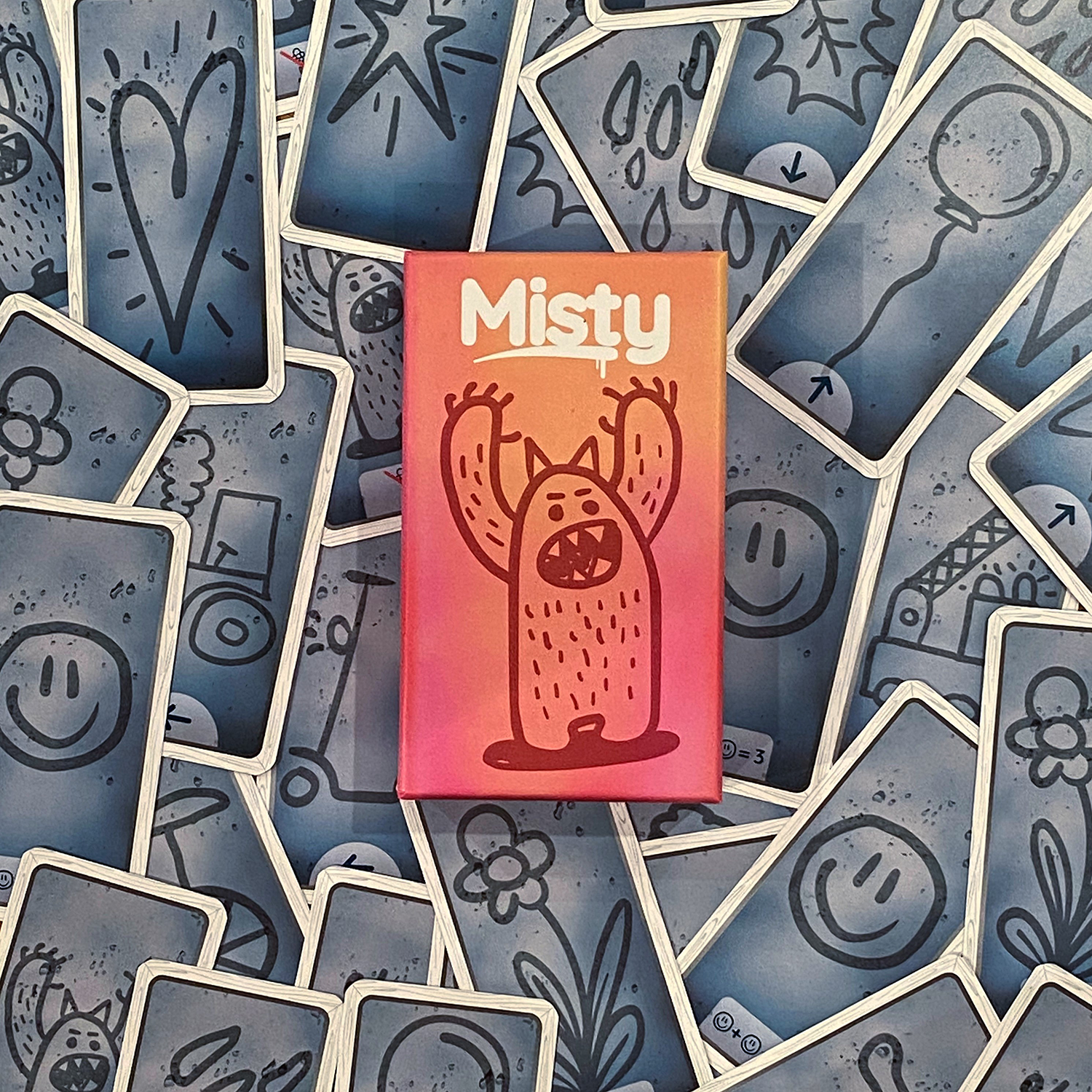 The cards in Misty are the same kooky size of most of their small box games and have cute artwork doodled onto them. From experience, younger players might not realise the leaf is falling but otherwise it is all clear.

The instructions come in a handful of languages. The instructions are however, my biggest gripe with the game. There is no rule as to which flower the monster should eat first if you have more than two flowers on display. I’m not a moaning Minnie so I wouldn’t be complaining if this was the only omission as you just assume you get to choose.

More problematic is nowhere in the rules does it say what to do if players draw on points. The trouble being, drawing on points is surprisingly common. Once you get the hang of it, you will generally be scoring between nine and eleven points. Add four players into the mix and draws are increasingly likely. The problem with this is that if you null and void the round because of a draw that doesn’t seem fair. If you give both players 1 point, then the winning objective of being the first to two points is particularly close. If those two people draw twice you have an overall draw, so that doesn’t feel like it works. So in my house we settled on half a point for a draw. You can adopt that too if you wish. I would rather this be in the rules though. 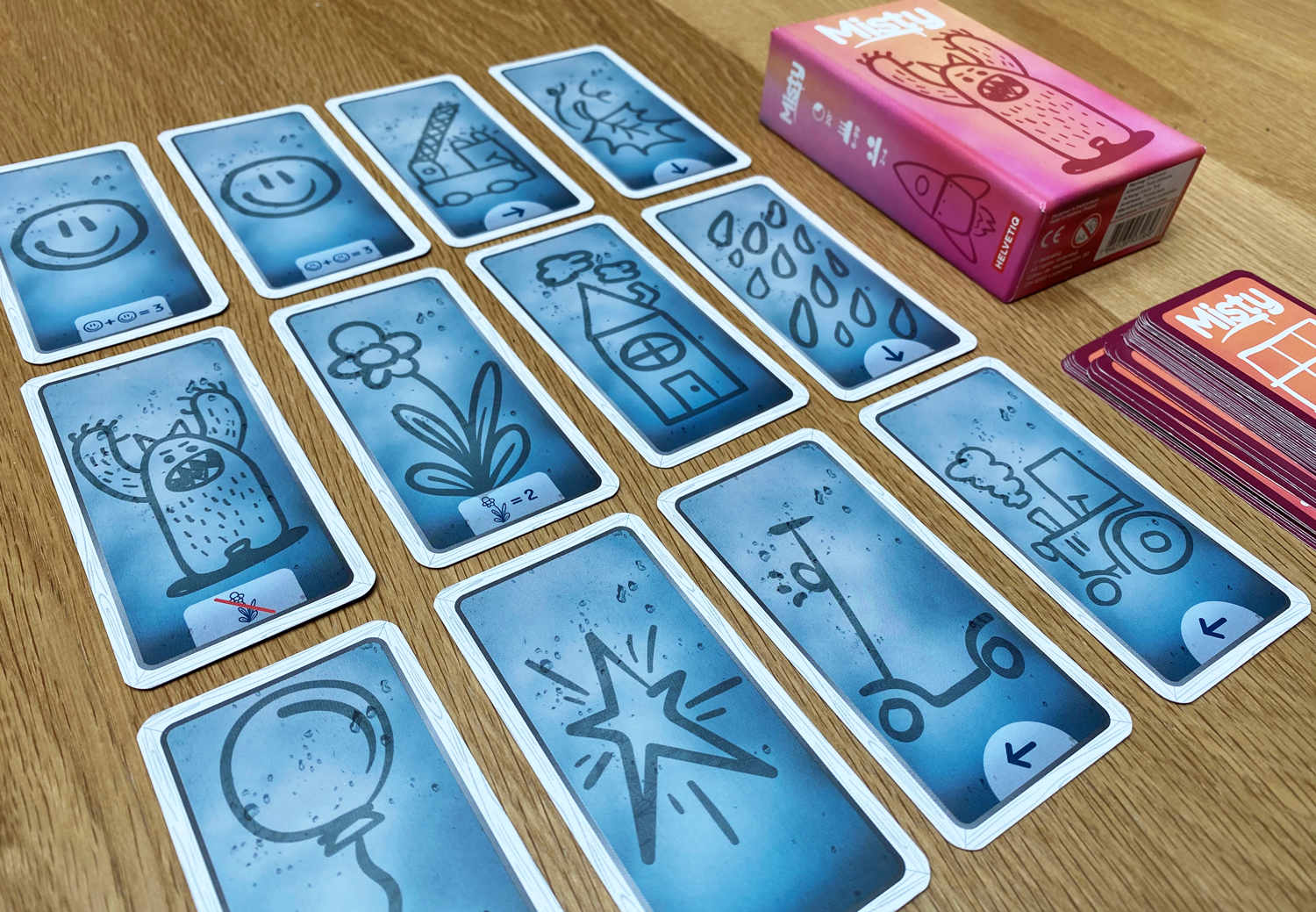 All in all, this is a quick small box game. It would literally fit in your pocket. I can imagine taking Misty out with me to entertain the kids while waiting for dinner in a restaurant, or to amuse us on a picnic, obviously not on a windy day – that wouldn’t work for obvious reasons! You do need a little bit of room in front of each player but it doesn’t sprawl like Bandido.

The planning of the activation is fun. The basic coding and minor educational quality is a redeeming feature for the not so great rule book. There is plenty of amusement to be had inside this little box.

My youngest, age five, gets the gameplay but can’t be very competitive at it. My wife and older two boys all really like Misty. I like it too, the artwork is endearing. Oh, and I do like the pick and pass play. So there definitely will be times where I will be grateful to get it out the cupboard for a quick, transportable game to play with the family. It just won’t be played as often as some others.

With an RRP around £10, it would be unfair to expect too much, and when you bear that in mind, the gripes and lack of depth are put into perspective.

Misty is a fun game that really appeals to my 9 and 12 year old sons. My wife and I enjoy it and are happy playing it with the kids too. Its transportable size is certainly a bonus. Overall, I think it is fair to say we all like this game.

If you already own Misty and enjoy it, or are looking for other inspiration, you might also like these similar games:

Buy Misty
from Out Of Town Games 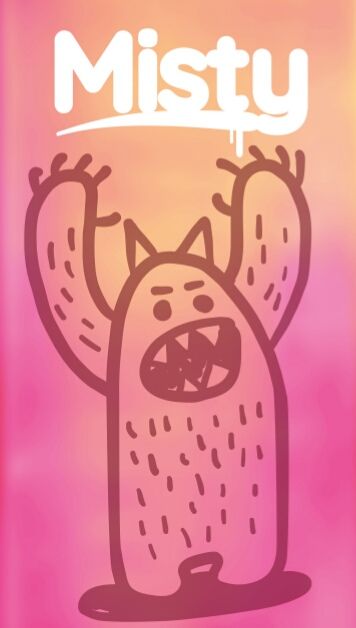 For clarity. We don’t get paid for our reviews. We were kindly gifted this game by Coiledspring Games, this has not affected our review in any way. We would be grateful if you gave them a follow on Instagram – they are nice people! (That, I suppose, is an unpaid advert for them!)