Advert: this game was gifted by Logis, this has not affected our opinion.

There are many things Aesop’s fables taught us. One is slow and steady wins the race. The moral being to never give up. Of course, that was based on a race between a Hare and a Tortoise. However, adopt a colourful snail and the dawdling approach will win you Go Slow! Because in this racing game for younger players, the aim is to be last!

Go Slow! is quick to set up. Four racing tracks are joined in the middle of the table and the snails are placed at the start. Each player is issued with two cards as a starting hand. Players take it in turns to play a card, and then redraw a card.

There are four types of card, fruit and vegetable cards jump you to the next unoccupied corresponding square. The sleeping snail allows you to miss a turn. The black numbered cards move your snail along that many spaces, however, if any snails are in front of you they get pushed along too. Finally, there is the red numbered cards with an arrow, these move the slowest snail along the track pushing any snails forward with it if they are in its way. The last snail on the track is the winner. 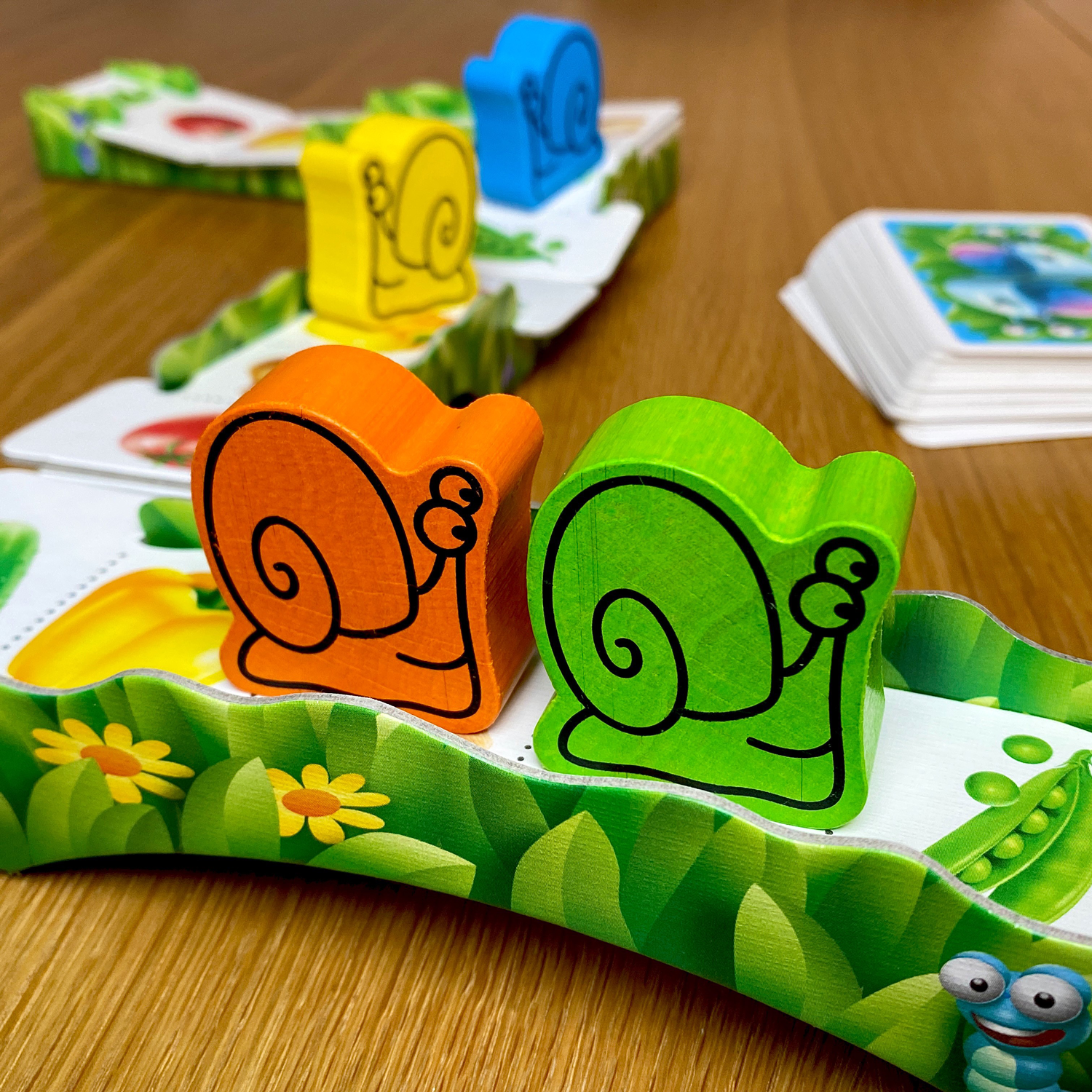 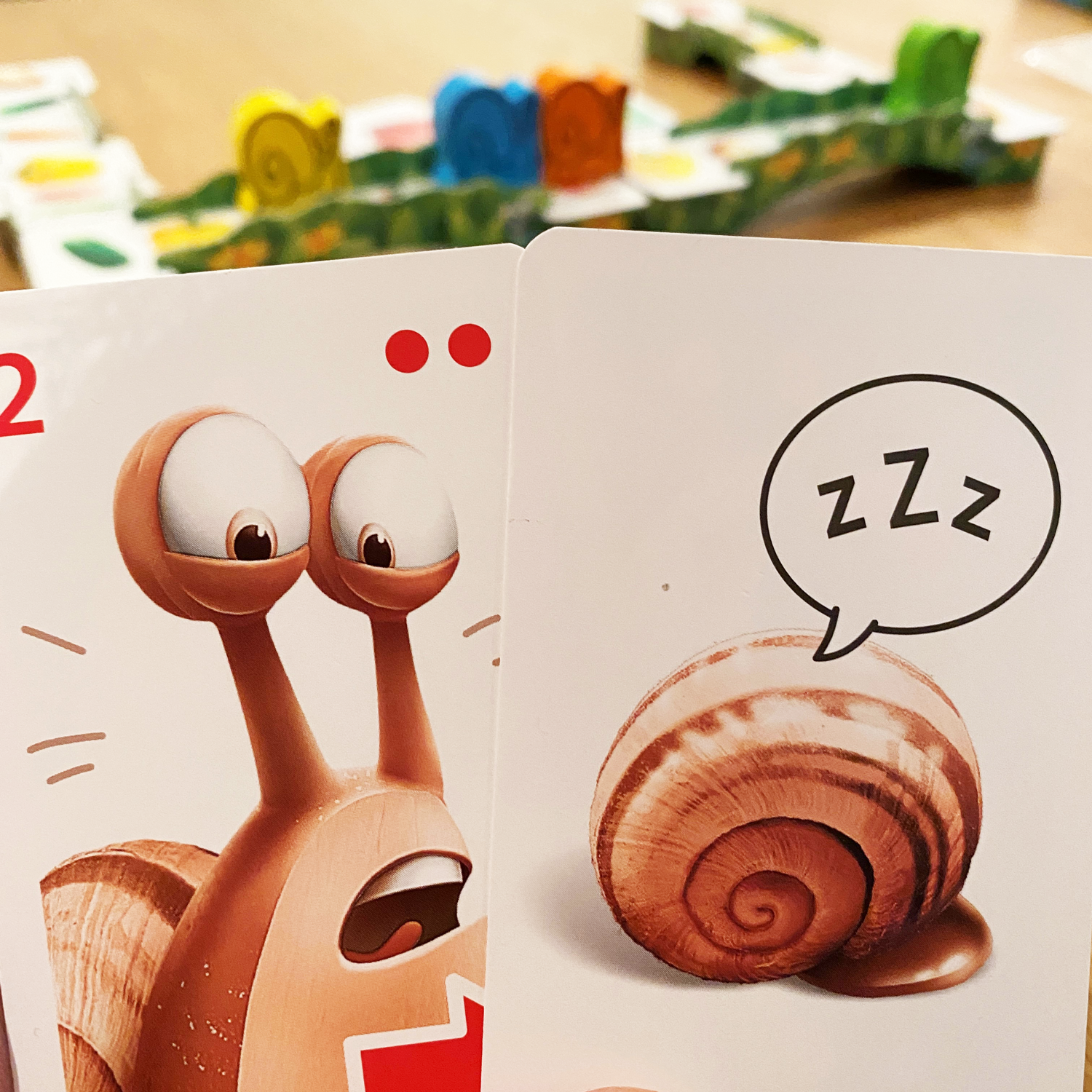 The play-a-card, draw-a-card mechanic is very simple and gives choice without being too difficult. Plus two cards isn’t too many for little hands to hold. The slightly trickier concept for younger players is to fathom that they don’t want to be first. This win condition is the opposite to anything they have ever come across and it may take a few games to realise how to win – by losing!

Once the basics have been grasped, it is masses of fun. Even for the more mature players or older siblings at the table. Don’t get me wrong, you certainly won’t pull this game out when the kids aren’t about! However, there is enough light strategy to keep you entertained. This is mixed-in with card drawing luck, enabling everyone to have an equal chance of winning. With two cards in your hand you have the opportunity to partly relinquish to younger players if that is your whim.

The other big selling point for Go Slow! is that it’s fast to play. Games are quick, usually taking around 15 minutes, making the game a great option for those with short attention spans. For everyone else there is plenty of opportunity for answering yes to ‘can we play again?’ 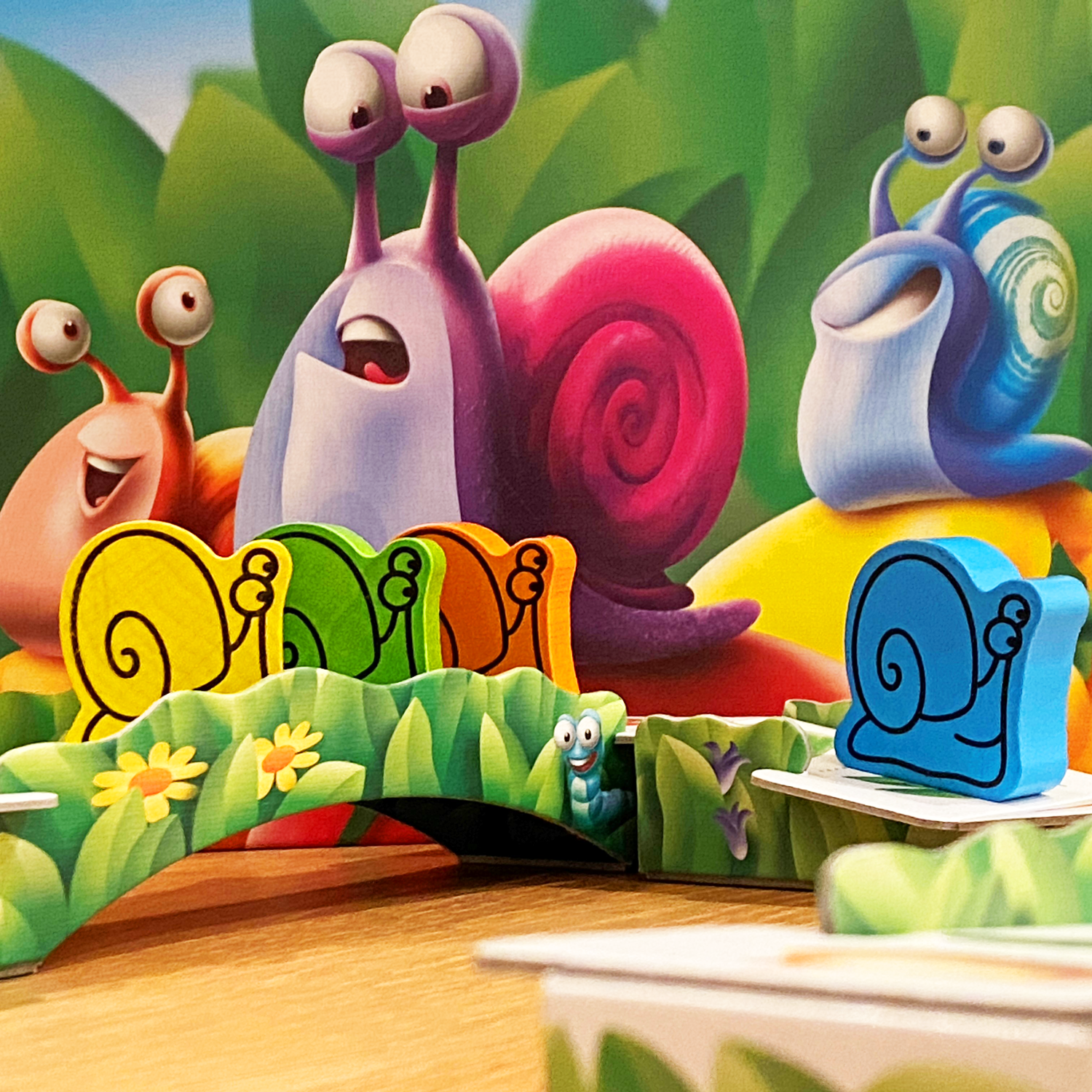 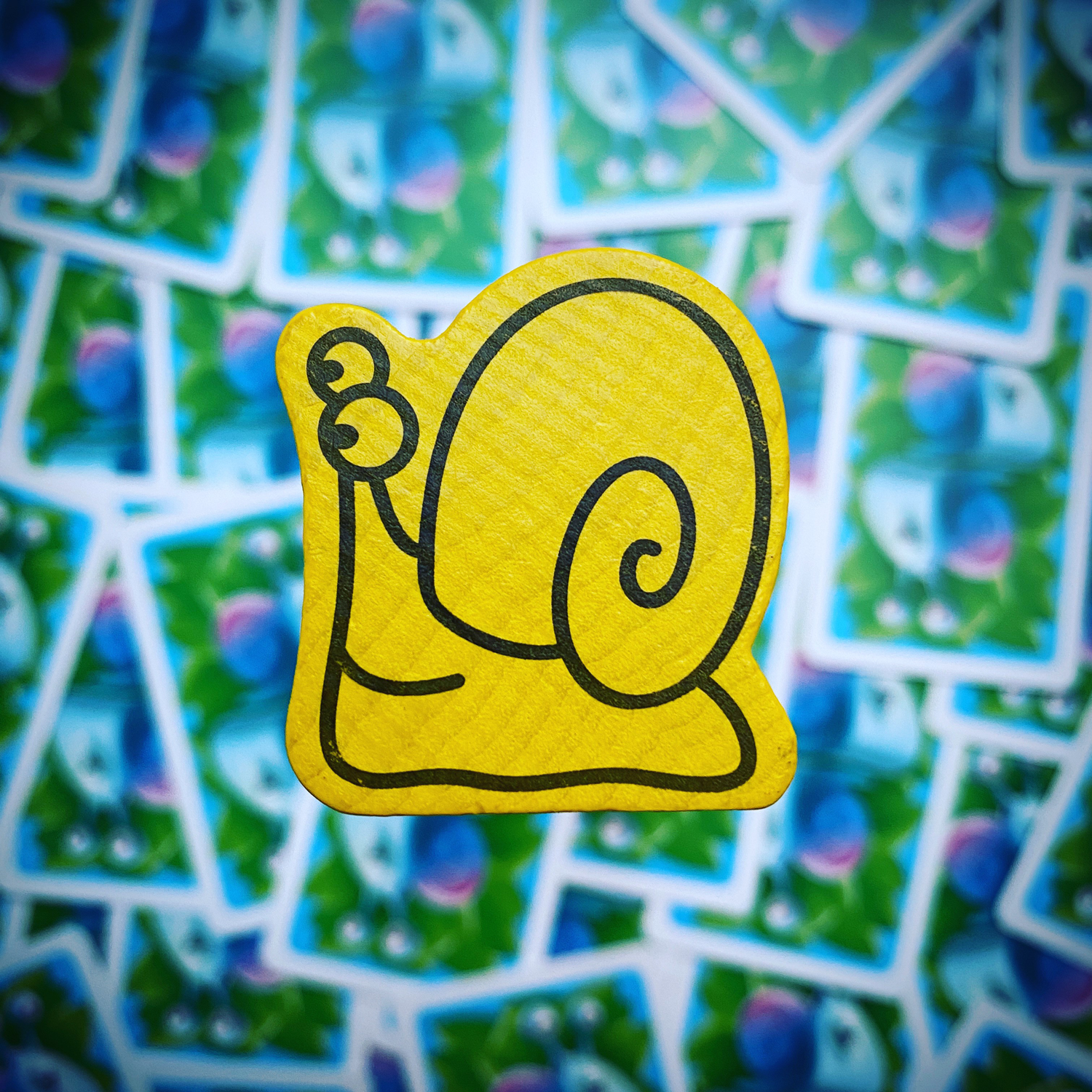 The instructions are clear and concise. There isn’t a lot to portray as you can tell from the ‘Gameplay’ section above, but it delivers it well.

This is a bright, colourful game with art by Gediminas Akelaitis. The cards are clear and good quality. Prettiness continues with the four racetrack sections adorned with the colourful fruit and veg. Sweet little bugs are on the side and even to the underneath of each section. Two tracks are funkily sloped down. These undulations very occasionally make snail placement a bit tricky – I am properly nit-picking there!

The snails are the crème de la crème: bright, colourful and substantial in their wooden-ness. All in all, the contents of the box are fabulous!

What the Kid’s Thought

Harrison (12): I like the snail tokens and enjoy pushing the other players along, especially at the end when it knocks them off.

George (9): The art is cute. I like the little details of the bugs around the edge and even underneath. I also like the pace of the game. 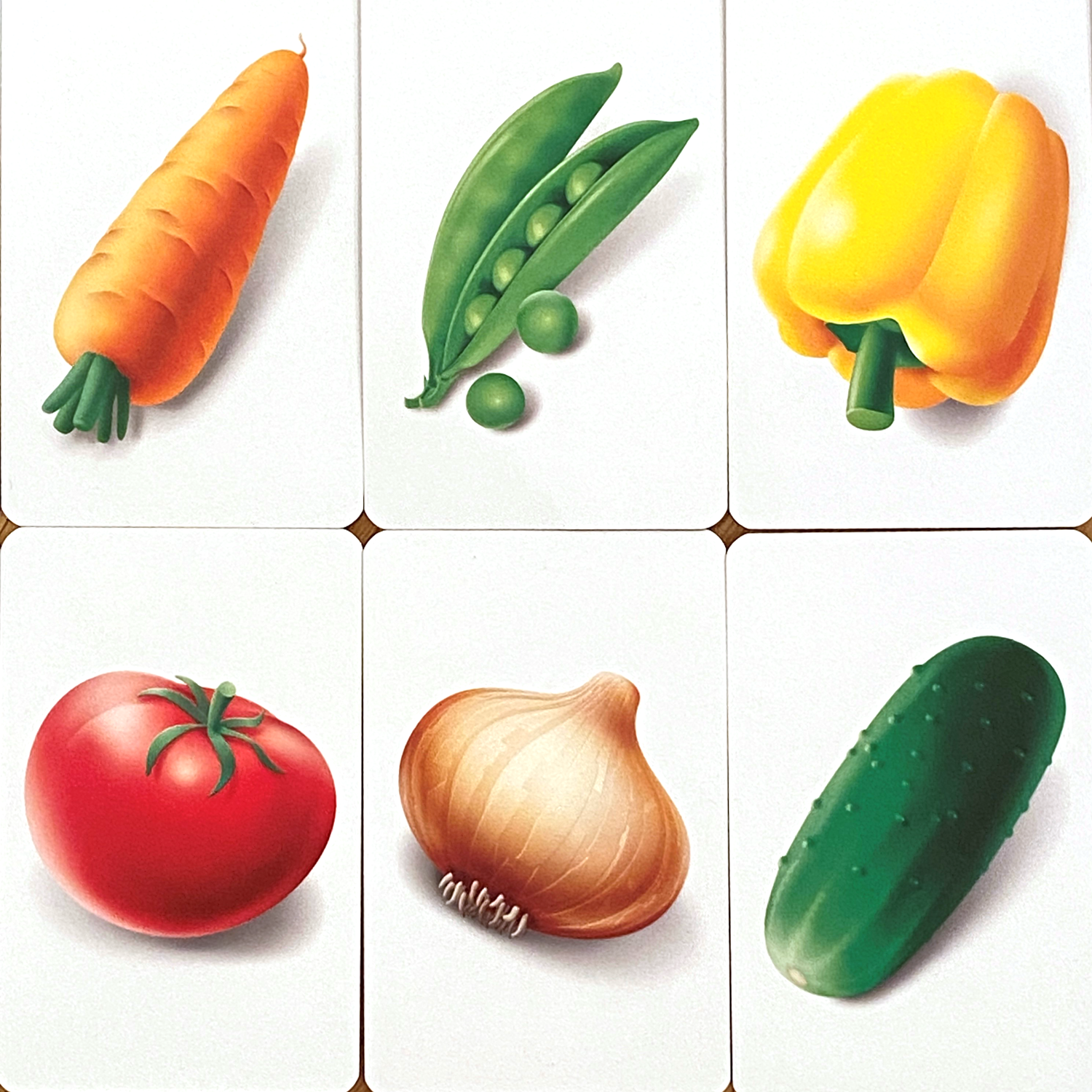 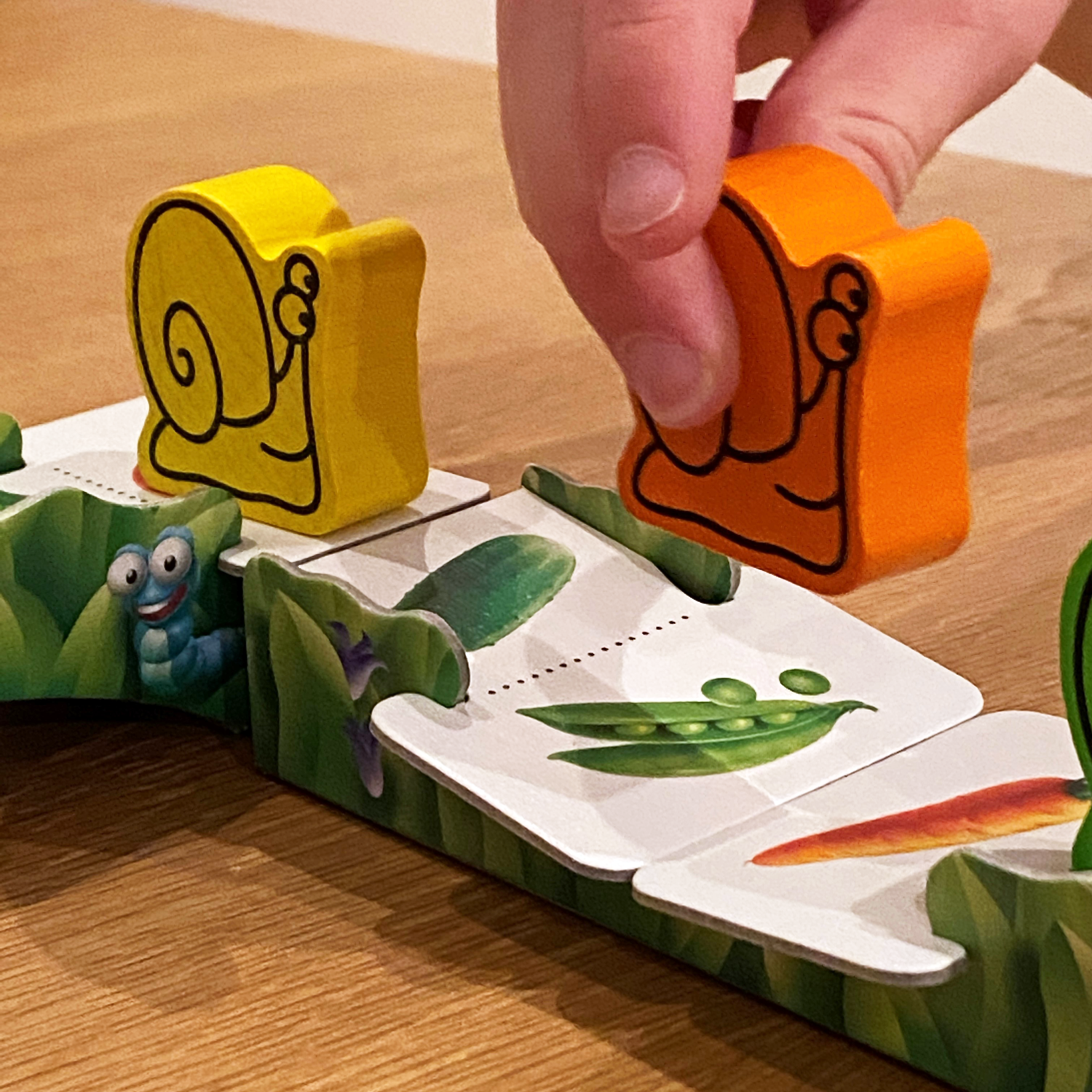 Racing for last place is an interesting concept and while it will be alien to younger players, I like the counterintuitive nature of it.

While the game works fine at two players, it is far better with three or four as the movement is more limited and your snails will be moved along by other players even more.

Like many children’s games there is a point where this game may gather dust on the shelf. Once your youngest family member hits seven or eight Go Slow! will subsequently rarely get played. Up until that point though, you will have plenty of family fun.

Finding games that work for a family with players under seven is tricky. The level playing field is only really present if luck is a significant factor. A purely luck-based game doesn’t always scratch the itch of the older players at the table. Luck is certainly a factor in Go Slow!, however, there is something about the game that helps it buck the trend. The quick play time, beautiful components and the choice of which card to play, combine to create a really fun game for all the family.

Logis have produced a brilliant game for younger players. Go Slow! is fast, good-looking and simple for all players. If you are looking to start your children board gaming young, this is a fantastic option to consider shelling out on!

If you already own Go Slow and enjoy it, or are looking for other inspiration, you might also like these similar games:

For clarity. We don’t get paid for our reviews. We were gifted this game by Logis which technically makes this an advertisement for them, this has not affected our review in any way.