My love affair with Ganz Schön Clever has lasted all year, and as predicted in my review, with over 40 plays this year there has not been a month when this game has not hit the table. I’ve nearly run out of scoring sheets and the pens have lasted as long and are equally on the way out. Now I could’ve purchased a laminator, but at the price of the game combined with my enjoyment factor, I’m happy to invest and rebuy the game again.

Doppelt So Clever (Twice as Clever) is the sequel to Ganz Schön Clever so I was eager to try it out. Do you want to know how it compares and what it’s like? If the answer is yes, read on! If the answer is no, you have to ask yourself what you are doing reading this far! 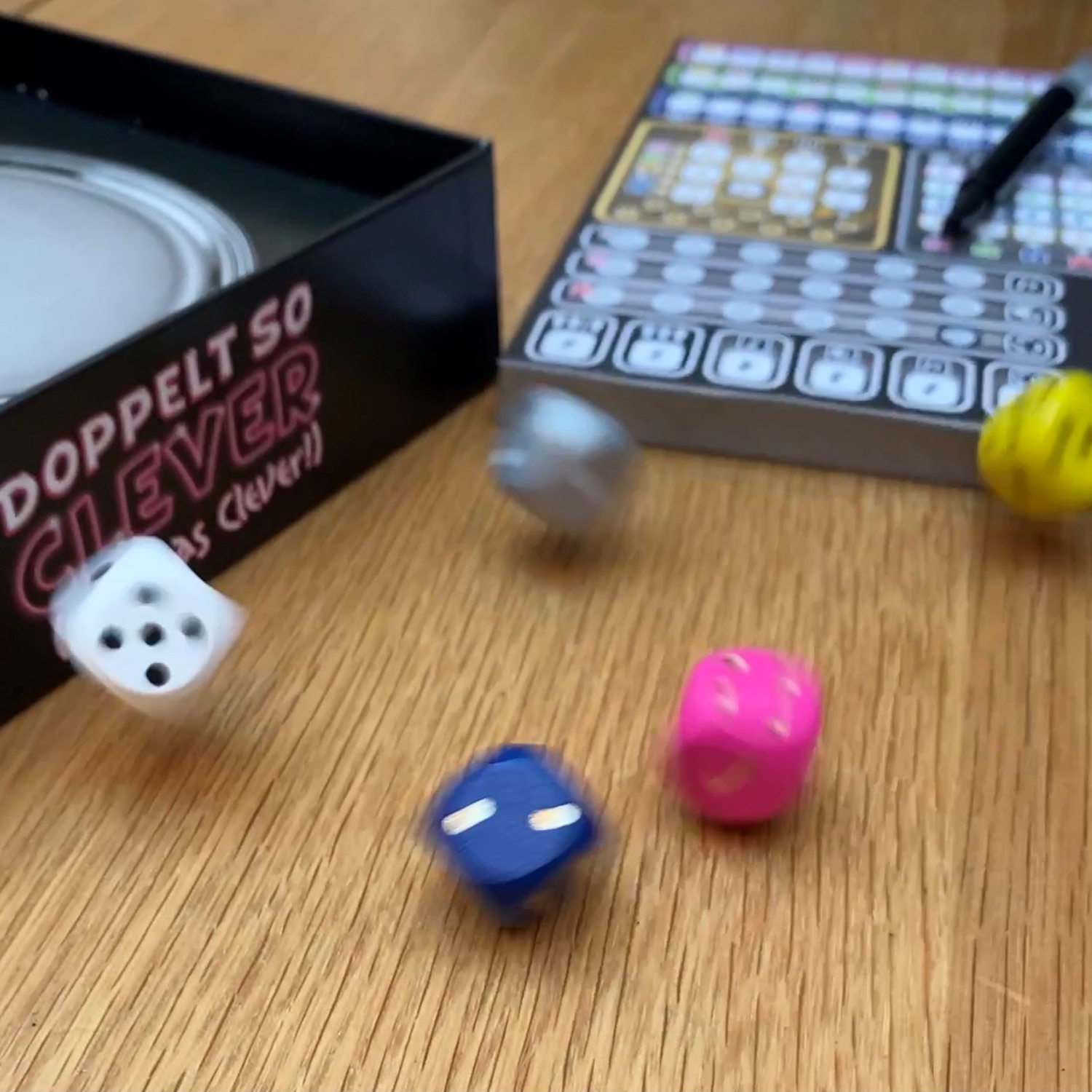 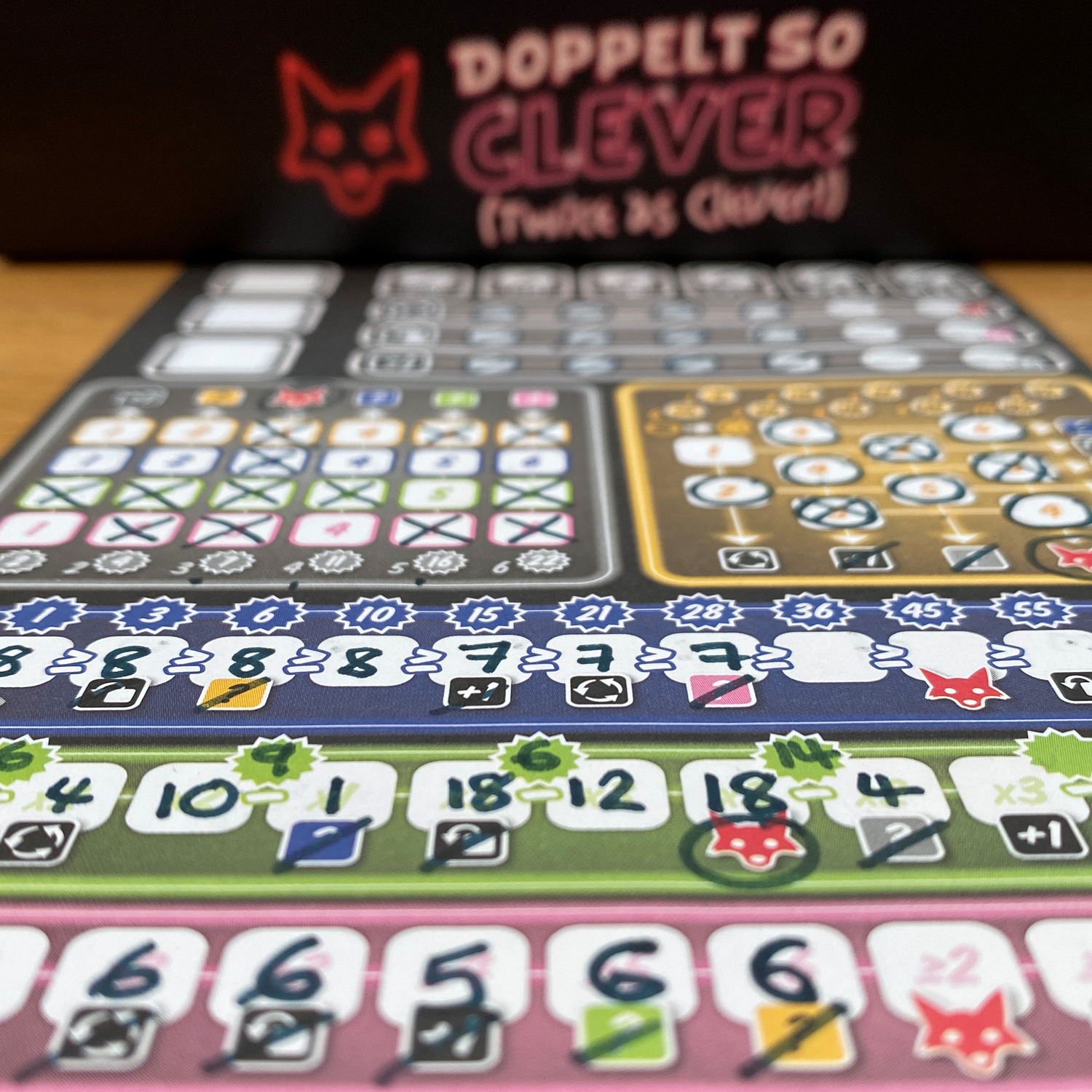 Playing Doppelt So Clever will feel very familiar to those that have played Ganz Schön Clever. The dice do different things and you fill in some boxes differently, but the nuts and bolts are basically the same.

For those that haven’t played the prequel, this is a roll and write game for 1-4 players. Players are issued a matching printed sheet of paper and a pen and that’s the setup finished! The aim of the game is to have the most points, easy so far!

Whoever is the first player rolls six coloured dice and chooses one to use on their board, either crossing through the relevant number or adding the number of the dice to their sheet. The white die can be added to the blue to fulfil the placement criteria, or can be used as any other colour as a wild die. As mentioned, there are placement requirements to meet, for example the blue and white must equal or be lower than the number recorded previously. The instructions do a good job of explaining these, so I won’t bore you with the details here.

When choosing a die however, any dice that are lower in number are placed to one side and cannot be rolled again. The active player then rolls the remaining dice again choosing another. They then roll one final time, again selecting a die. All non-active players then get to choose one of the three discarded dice to use themselves. Play then moves around and these steps are repeated.

When all players have had a turn of being an active player the round ends.

Throughout the game players will activate bonuses. These include being able to reuse a dice at the end of the round, bring a discarded dice back down, re-rolling your dice, or filling in another square on your sheet of a specific colour. Fox heads are another bonus which allow you to add your lowest scoring zone onto your final score, a few of these can make a big difference. At the start of each of the first four rounds you will also get an additional bonus. Depending on player count you will play four, five or six rounds before reaching for the calculator and tallying your scores.

Doppelt So Clever has an additional solo mode, this is very much beat your previous score, but still very entertaining. The only difference being that as a non-active player you roll the dice and can choose from the three lowest value dice. I don’t do a lot of solo gaming and I wouldn’t choose this above Ganz Schon Clever. It can be a bit tricky to remember to mark off your rounds as a single player, because you don’t have the same punctuation mark that you do with more players. 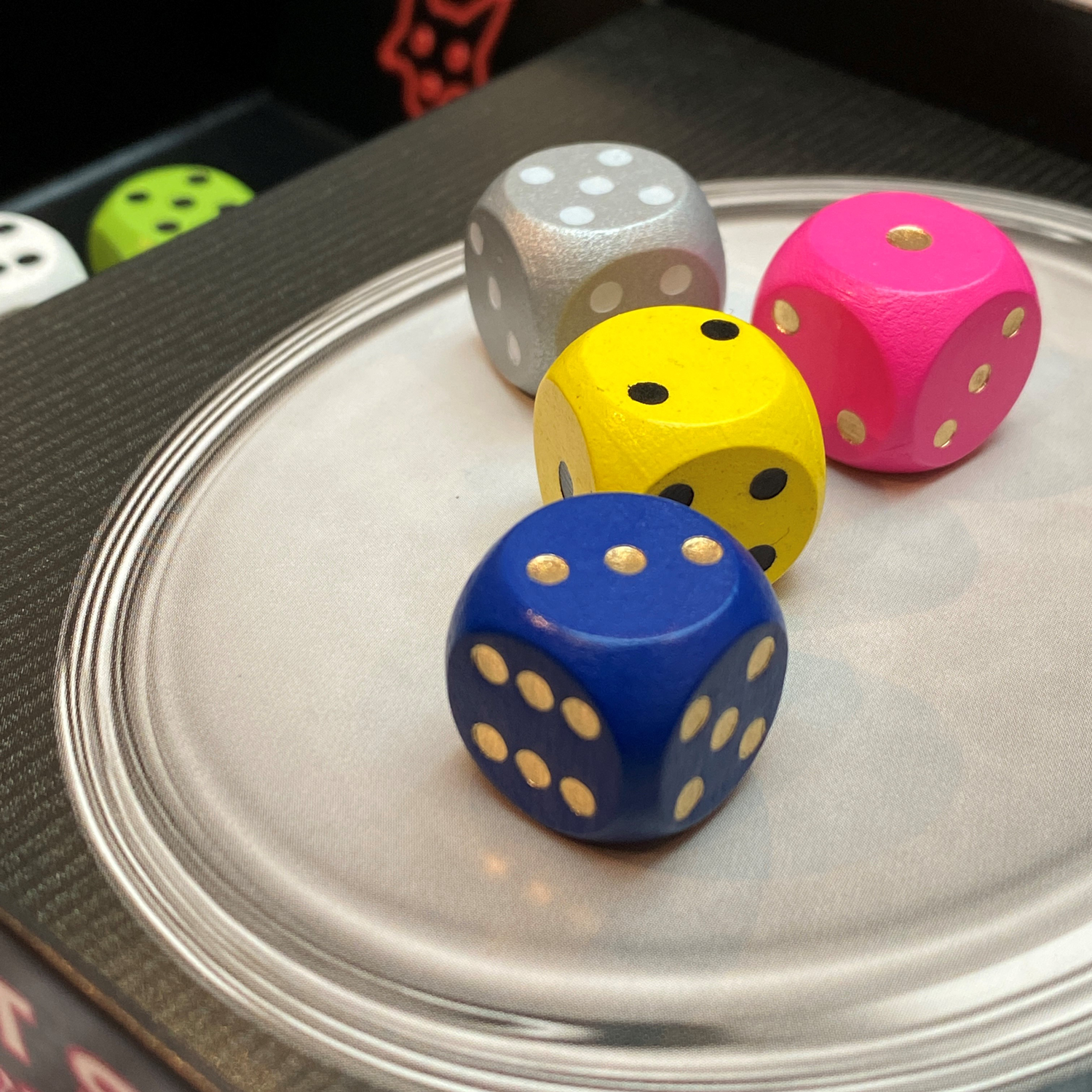 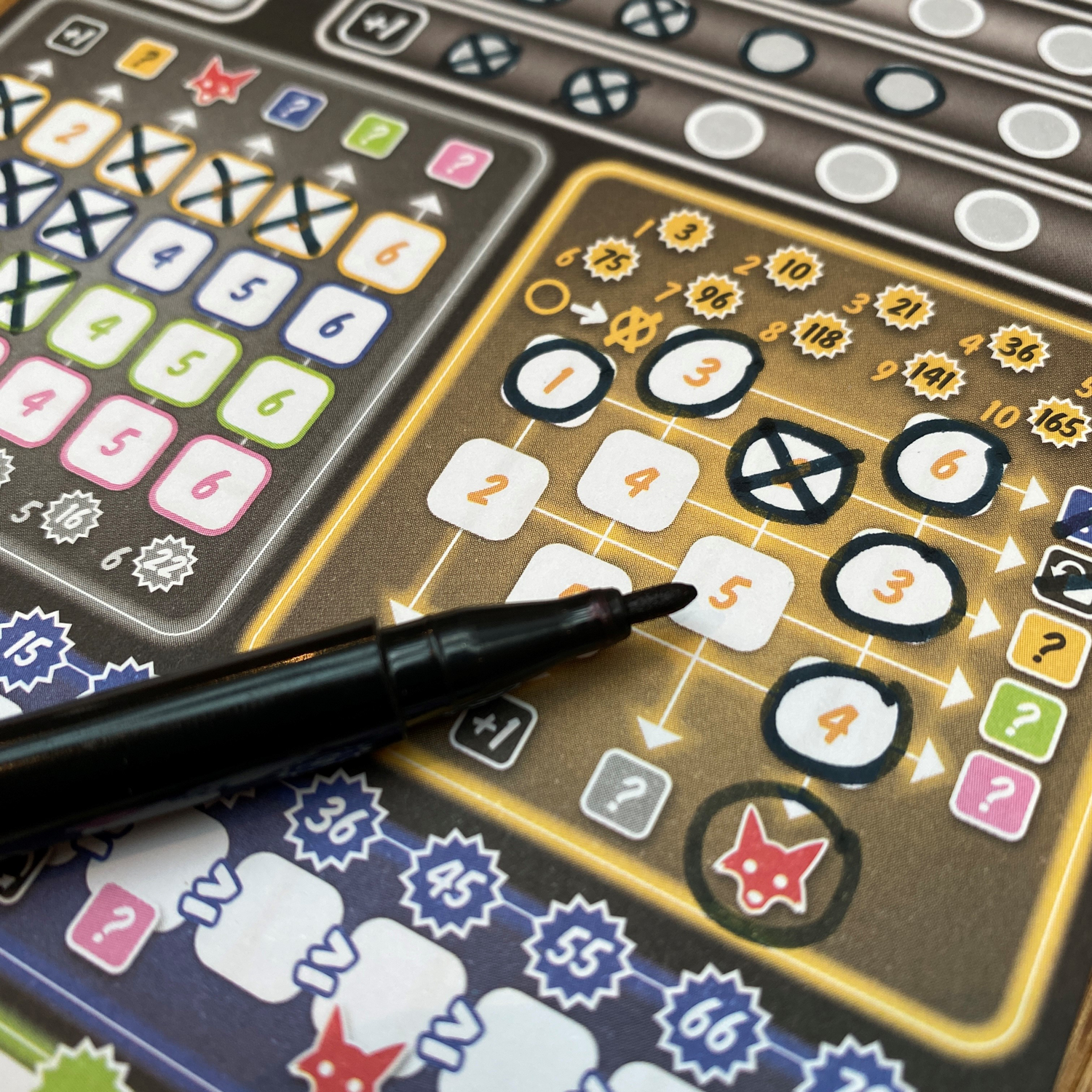 Rolling dice is always a pleasure. Luck is often an issue with dice but Doppelt So Clever has plenty of ways of mitigating that luck and giving you plenty of control. More so than the original – that is just one way this game is so clever.

Another way this game earns its name is with the choice of dice. The high numbers are very tempting but this has to be balanced with losing dice for future rolls and giving opponents too many good options at the end of your turn. As a result you will generally chose a low number on your first roll, another lowish number on your second roll, and on your last roll choose a high number. Rerolling when you can’t place a low number early on.

The new silver dice, which allows you to mark off the lower value colours in its grid, add a different decision into the mix, especially when coupled with the ability to bring a dice down with the new bonus available.

Working towards bonuses is vital. So too is not neglecting any zone so that your fox heads are worthwhile at the end of the game. There is often lovely moments in the game where these bonuses cascade down through one another really filling up the sheet. This is just as fulfilling as the predecessor.

Although interaction isn’t at its highest, you are invested in other player’s turns. Like children around a sweety bowl while trick or treating on Halloween, waiting to see what’s left when your hand reaches in!

There isn’t a lot to Doppelt So Clever, a pad with oodles of sheets, four mini pens and six dice. So very little you can get excited about. The game is certainly the attraction here rather than the aesthetics. Doppelt So Clever will not win a beauty pageant at the Miss Board Game competition, but then it would be there for its brain and not its body anyway.

Just like Ganz Schön Clever, Doppelt is entirely without a theme and I don’t mind that, but I know some might.

The rules are clear and concise. There is more to think about and get to grips with as the dice and bonuses are a bit more… clever. There is also a bit of adding up at the end of the game to determine the winner. When I was at school my teacher told me we had to add up in our head as we wouldn’t always have a calculator in our pocket. Mobile phone inventors really stuck it to their maths teachers and so you should be okay with tallying the scores at the end. 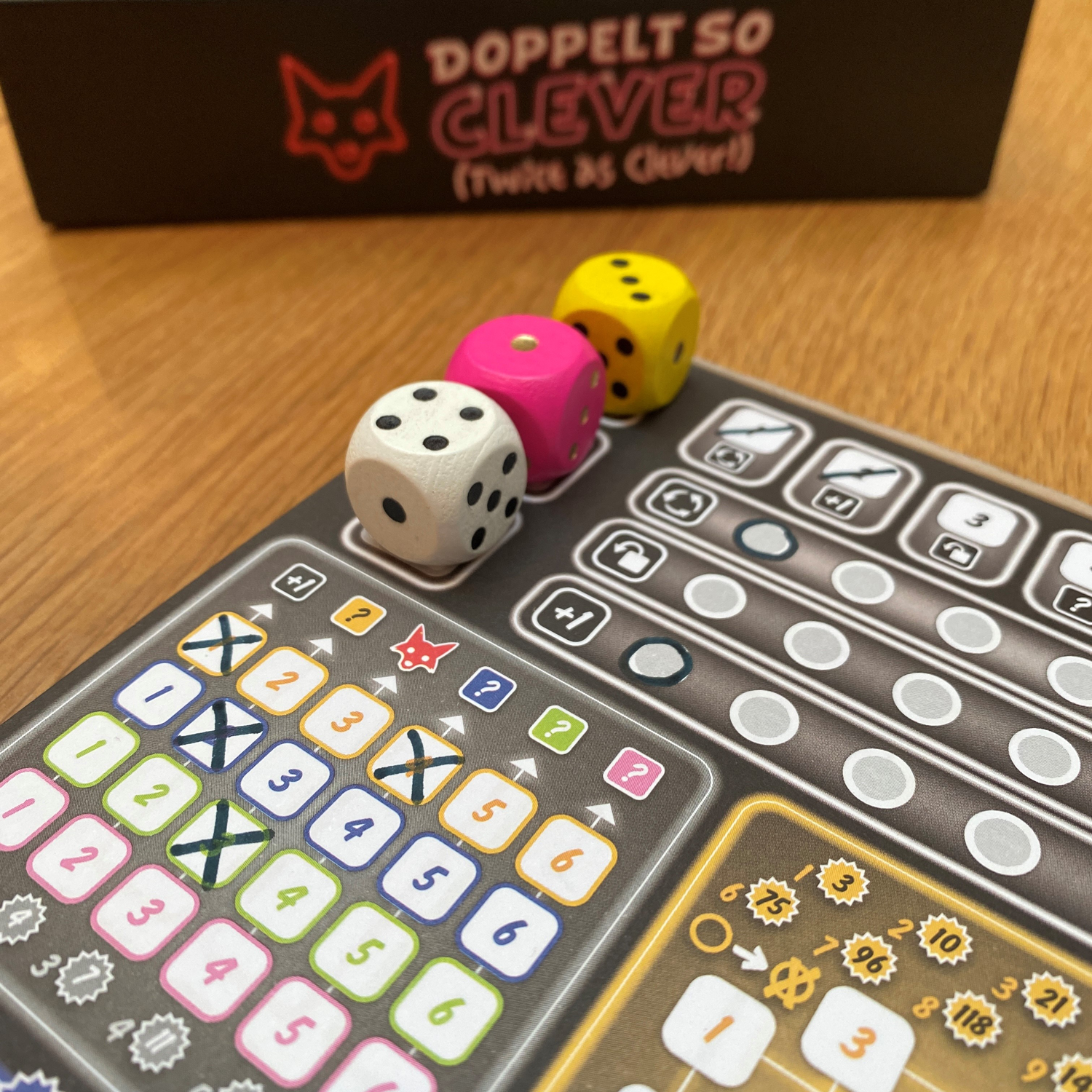 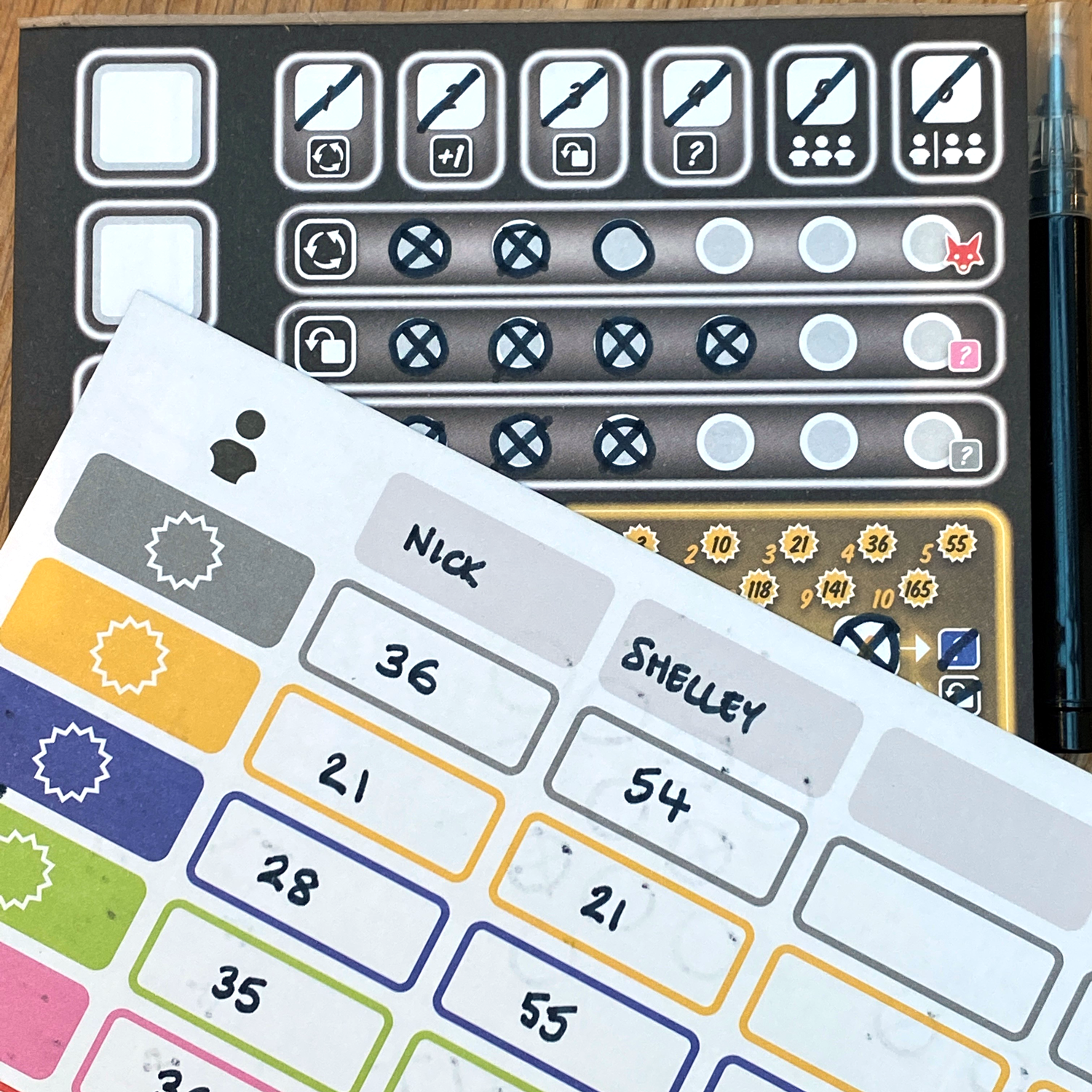 Final thoughts on Doppelt So Clever (Twice As Clever)

Billing itself as Doppelt So Clever, suggests it is twice as clever than its predecessor. Now that is quite the claim! It is undoubtedly the next level up in terms of trickiness and as a result, there is more to think about. It is therefore definitely cleverer, but not doubly so.

I think I would always recommend people to start by playing Ganz Schön Clever above this one first. However, if you ‘ve played it and you have enjoyed the precursor, Doppelt So Clever mixes up the play enough to warrant owning both. If I were to only own one, I think it would be the original.

Doppelt So Clever gets to the table often, but nowhere near at the same frequency as its older relative. I love the original, and I really, really like this version too. Doppelt adds additional things to think about. The further strategy and the variety it offers is welcome on my board game shelves!

Had I never played Ganz Schön Clever this would be a rave review. Doppelt So Clever is still a brilliant game. It adds some further strategy with different objectives and bonuses. Overall, it is a bit more thinky, and I really like it. I personally prefer the original. However, I am certainly pleased I own both!

If you already own Doppelt So Clever (Twice As Clever) and enjoy it, or are looking for other inspiration, you might also like these similar games:

Buy Doppelt So Clever
from Out Of Town Games 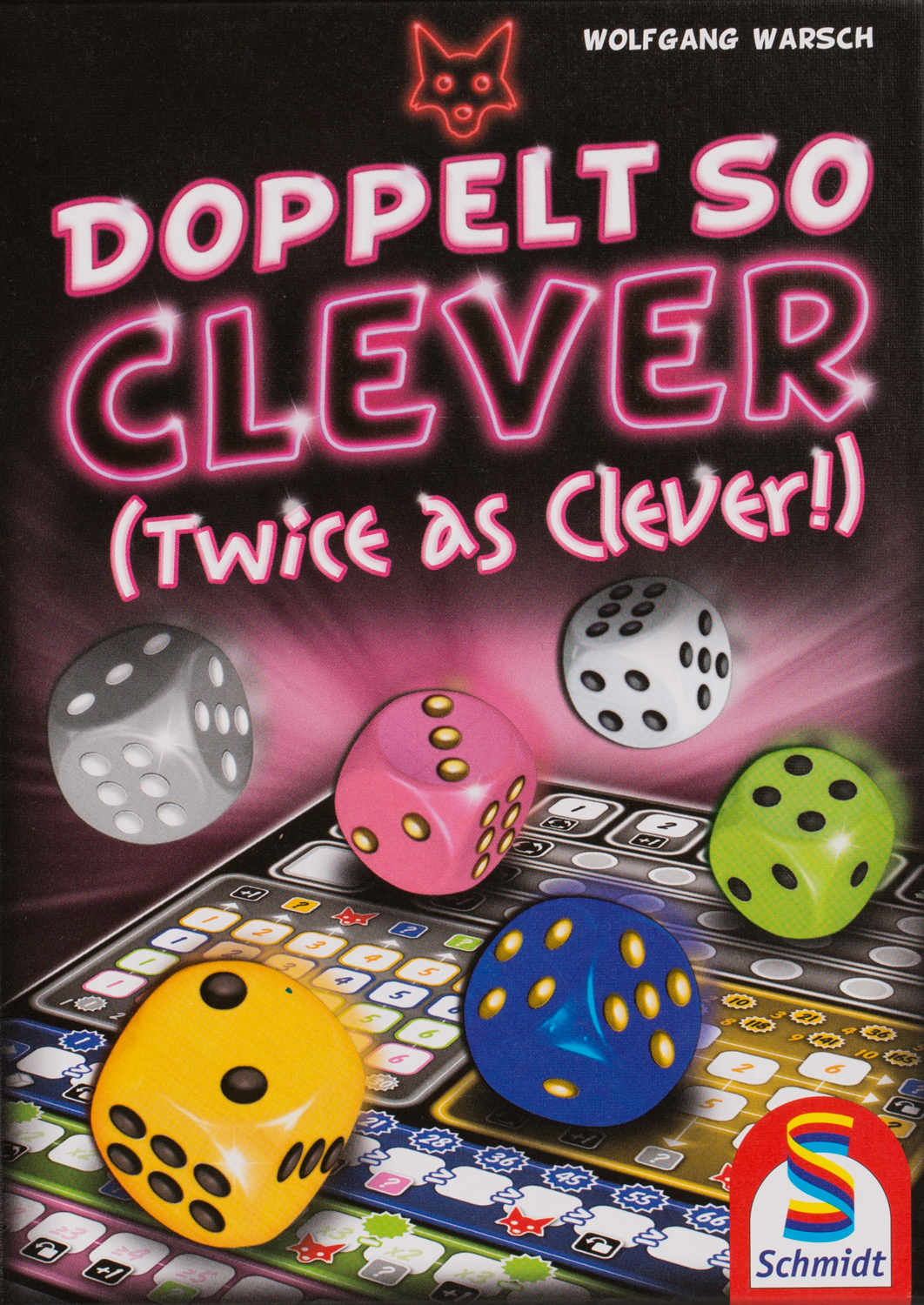 Buy Doppelt So Clever
from Amazon

For clarity. We don’t get paid for our reviews. We paid for this game with our own pocket money, this has not affected our review in any way.