The 1905 to Paris is armed with a bomb. Can you identify the Saboteur and avert disaster? Well that is the name of the game in Stop the Train! A new game set in the 1940s which sees players trying to stop a train on a disastrous collision course – hopefully throwing the saboteur from the train and completing your own missions along the way. It is a semi-cooperative social deduction game with plenty of hidden roles.

I was lucky enough to catch up with one of the game’s designers in Brighton on their tour of the game. You can read our preview of the game here.

Thank you so much for taking the time to speak to us, especially as you are currently busy taking your new game Stop the Train! on a tour around the UK. How has the feedback from the public been so far?

Happily it’s been really positive! We had a particularly cracking night at the D20 cafe in Watford last month. Everyone was engaged in the concept, it was warming to see laughter and social interaction – both welcome antidotes to the volume of screen time that’s becoming prevalent in modern lifestyle.

Not just Watford though, it’s just been a lot of fun and received well wherever we take it. Along the way, we’ve found a community of people excited for us and full of suggestions to expand, refine and vary the game experience.

Have you gleaned any brilliant ideas from the play testing that you will incorporate into the final game?

We’ve received many suggestions and I think that’s testament to high engagement in the game. We’re on to something really good here if people are excitedly adding more ideas into the mix. That’s the benefit of play testing! If you can ditch your designers ego for a moment and embrace feedback, of course external input can improve your design – a simple text tweak on a card, a new character suggestion, or someone saying ‘It was great, but I also wanted this…’ – it’s all valuable.

We won’t incorporate all the ideas but we will consider them all. However, some are too appealing to resist. I’m most looking forward to adding a ‘rooftop showdown’ intervention card which will add some extra drama to the game finale. There’s also the suggestion of a card that gives the Saboteur more coal to fuel his appetite for a collision. 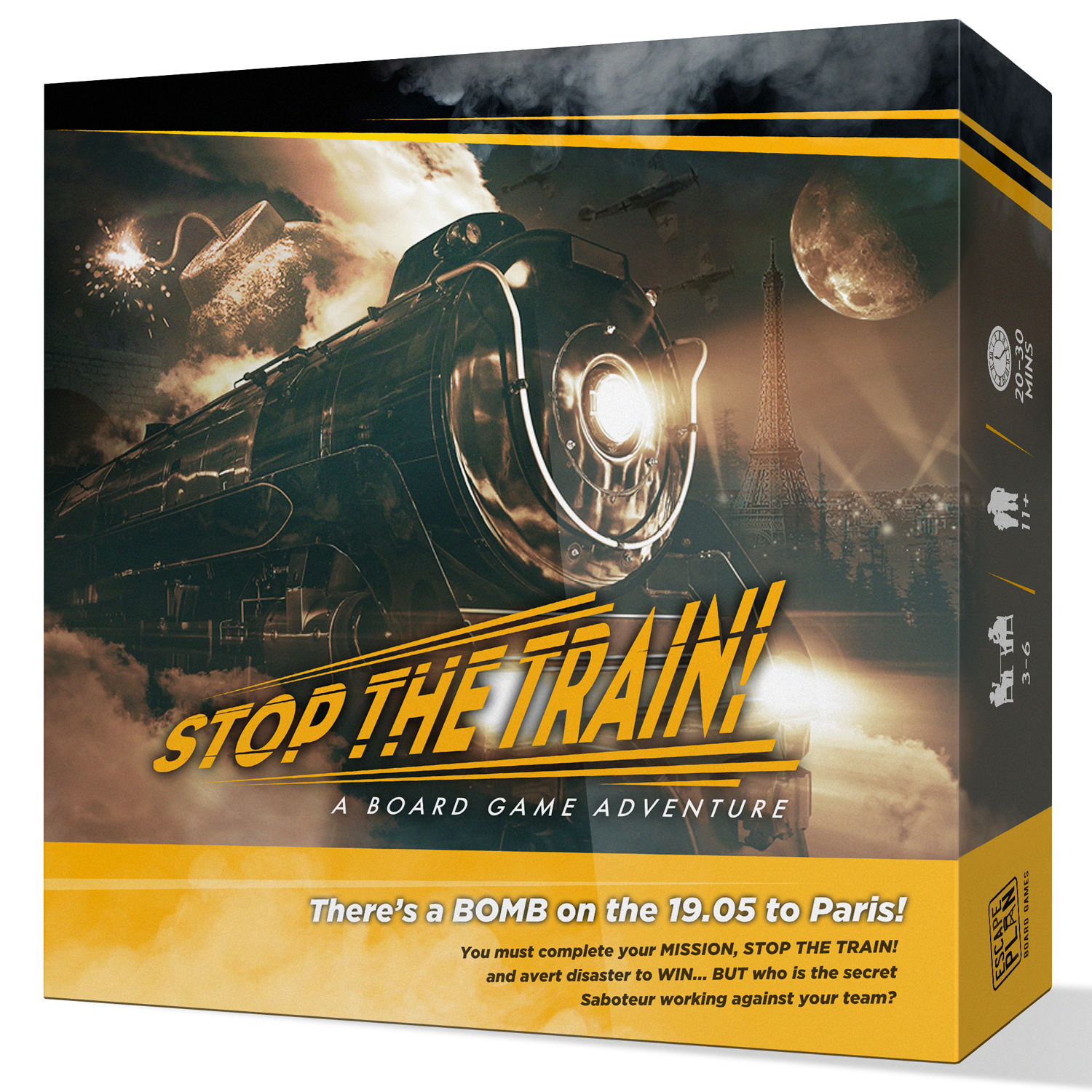 Stop the Train! Box Art
Image courtesy of the designer. 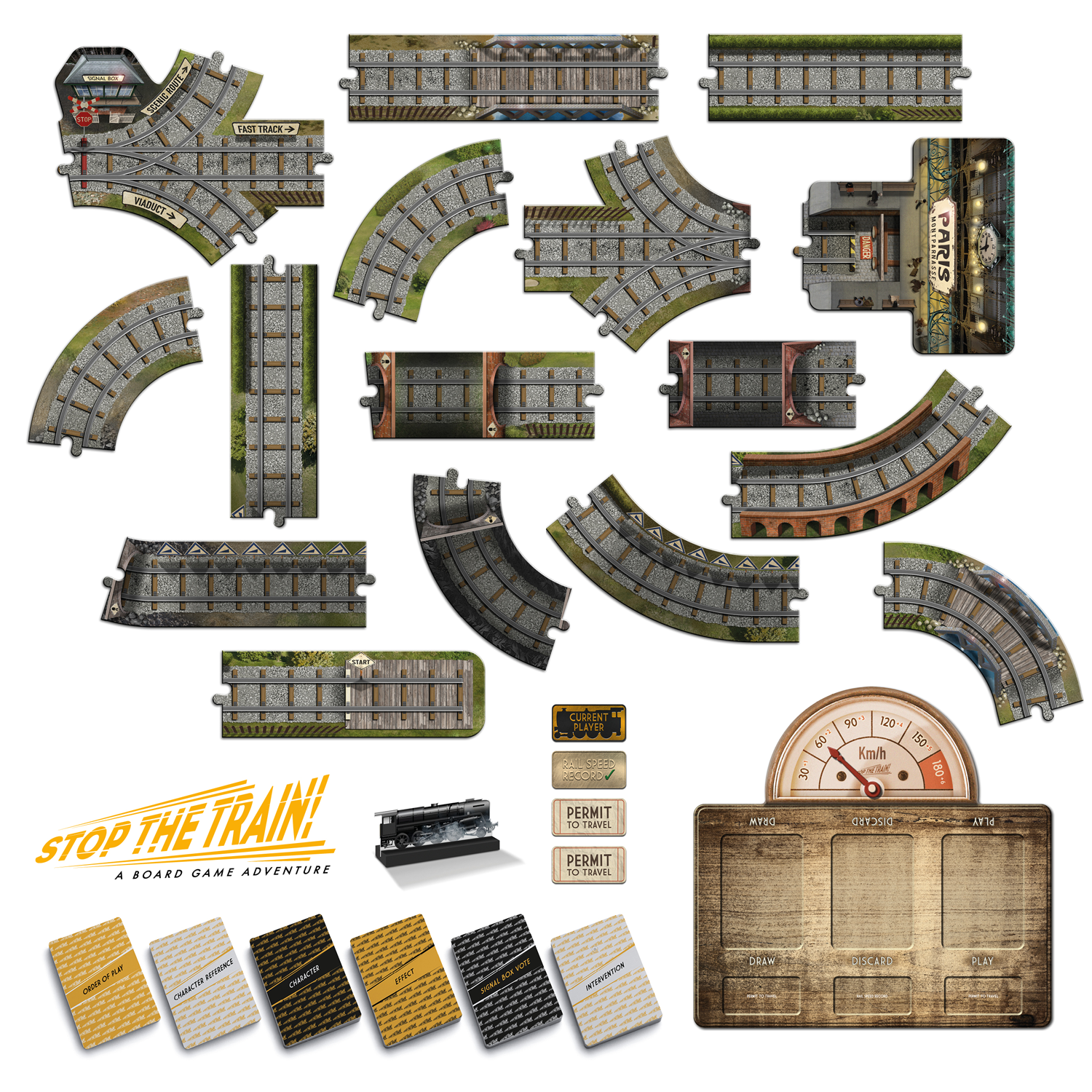 Stop the Train Box Contents
Image courtesy of the designer.

Having played Stop the Train! myself, I can see that the balance of the other characters does help to conceal the saboteurs identity. You’ve obviously played the game a lot, so is there a character you personally love playing and why?

I like the dilemma of the Mi6 agent, who must stop the train and yet keep the Saboteur alive for questioning. It’s an enjoyable conflict of interests.

But the real beauty of the game is the intervention cards: when you can pair the perfect intervention card with your character, you can set yourself up for victory or, if you prefer, cause utter chaos. My favourite card there? “You’re coming with me” where you can drag someone with you if you’re ejected from the train!

That’s just malicious, but funny I agree! What’s the most amusing or offbeat event you’ve seen in a game?

That was yanking you out of a train toilet, where you were hiding. This incriminating behaviour was suspicious. And even though you ended up being an innocent Engineer, I do not regret throwing you off a bridge to an unpleasant fate.

I told you I was innocent! My highlight was winning the very next game but we should probably move on… with escape rooms in Shoreditch and Kennington, how has your background in that industry transferred to creating a board game?

Board game play testing is similar to escape rooms, although with less breakages! You watch and watch and ask questions and get curious. Sometimes the answer is handed to you and other times, you tough it out. Sometimes your Eureka moment hits you at 3am and you scrabble for a notepad in the dark.

Stop the Train has a strong immersive feel – we actively choose background sounds to enhance it further at home. Players have individual missions but intertwined fates and the variety of possible outcomes and drama is huge, which keeps it replayable. That’s the main difference to an escape room – replayability. There is a lot more scope for varied endings and outcomes. 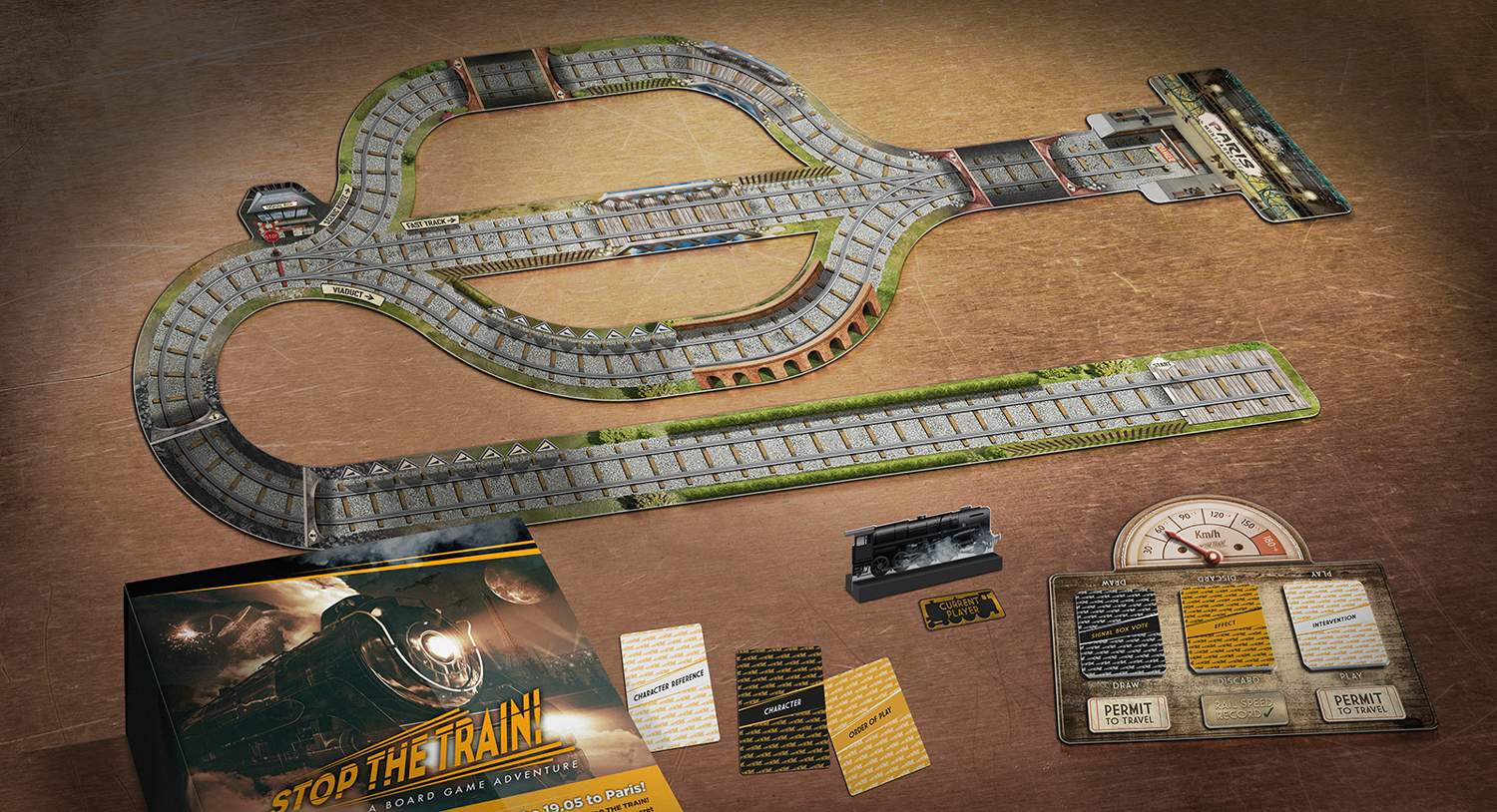 Stop the Train! Game layout
Image courtesy of the designer.

Who have you partnered with to create this game?

The same team as at Escape Plan that’s made our fantastic live escape games. Our prop maker, and laser cutting genius, Peter Watt at Lasercraft has been invaluable with the prototyping and we feel the game has an excellent table presence.

Our designer, Gareth Griffiths has made some stunning creative which really helps communicate the world we imagined.

Kerry Mills, also my partner in life, brings the marketing prowess and works tirelessly with the development process. We’re a great team.

So what was the inspiration behind the game?

My brother-in-law dreamt up the embryonic idea of the a trivia-based bluffing game, in which you are penalised for wrong answers by increased train speed. We added a saboteur in to murky the waters between poor trivia knowledge and nefarious behaviour. Can you pretend to not know common general knowledge? As a joke, I began making a paper prototype for the family Secret Santa at Christmas. 18 months later, it’s on Kickstarter! Except there’s no trivia and a whole lot of new stuff.

I like the sound of the trivia version, I will look forward to the expansion in 2021! What is your board game background?

As a kid, we played games, Escape from Colditz, Monopoly, Chess, The London Underground Game, Risk and I learned everything I hated about board games in that time. Games that are stacked against you, games that don’t keep you interested to the last, games that involve a lot of waiting around. Things got better in my young adult years. We enjoyed more party games like Articulate and Taboo and for bigger groups, Loups Garoux (Werewolf). A few years back I began playing cooperative games and began to find a real love for board games. 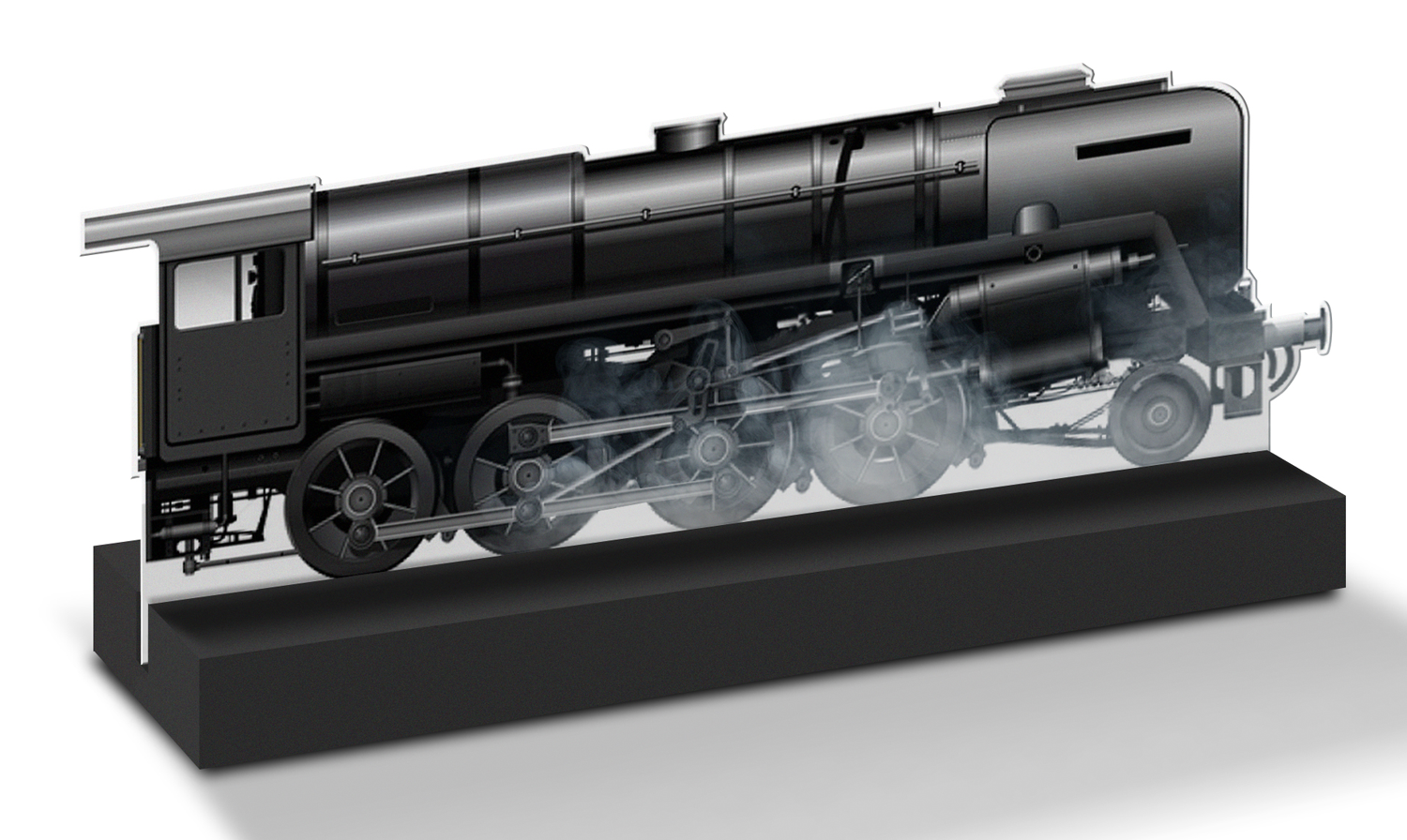 Other than your own, what is your favourite board game at the moment?

Colt Express brings a lot of fun unfolding drama to the table – we like that one. Quacks of Quedlinburg is frequently on the table too. We love the simultaneous play and the glee you have trying to fill up a cauldron without blowing it up. It’s a great one for our daughter too! For beautiful artwork, a nice challenge and satisfying game play, I enjoy Pandemic: Iberia

Thanks again for your time. I will look forward to following how Stop the Train! develops on Instagram and seeing it on Kickstarter. I can’t wait! When are you planning on launching it?

Kickstarter campaign begins 19th May. People can follow us now at: https://www.kickstarter.com/projects/brendanmills/stop-the-train

Don’t miss the early bird discount by pledging in the first few days!

Good luck with the Kickstarter campaign!

Tiles of the Arabian Nights Preview

The Nick & Jim Show – Episode 5: Raiders of the Lost Kazoo